Last week was yet another holiday shortened week and the market saved its best for last.

That is, after three lackluster days, it rallied on Friday ahead of the weekend. 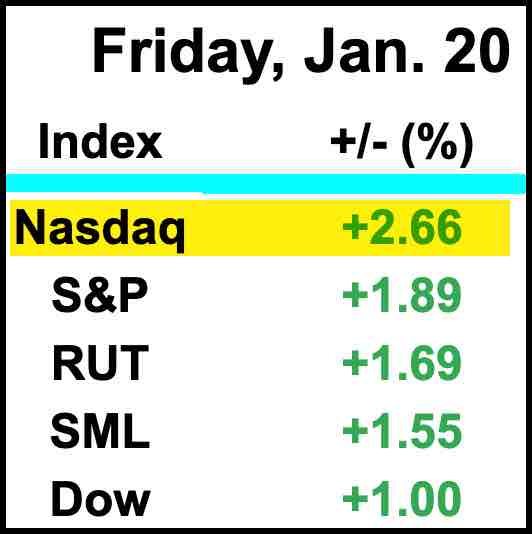 The tech-heavy Nasdaq Composite led the way, gaining +2.66% on the day. For bulls, the strength in tech is a welcome sign.

Here's how the market fared over the entire four day week. 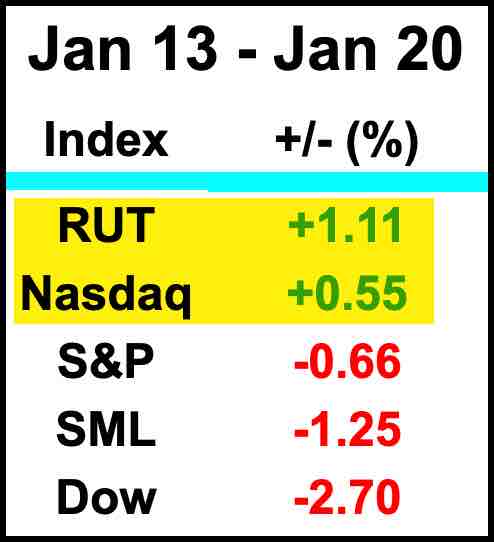 The Nasdaq was one of only two major averages to finish the week in the black. During bull markets, tech stocks tend to do well.

That's because when it's "risk on" in the market, investors are willing to weather the volatility that's par for the course for the tech sector, which is filled with smaller companies that maybe have yet to post earnings.

Just as encouraging is the fact that our small-cap proxy, the Russell 2000, was the strongest index on the week. Small-caps tend to lead large-cap stocks, especially at the beginning of new bull markets.

There are plenty of reasons to be bullish on 2023. One of the best is something a lot of investors don't consider: it happens to be rare for the market to fall in consecutive, or multiple years. (It's only happened twice -- in 1973 and 1974, and between 2000 and 2002 when it fell for three years.)

Plus, there's a seasonal pattern that says, "As goes January, so goes the market." 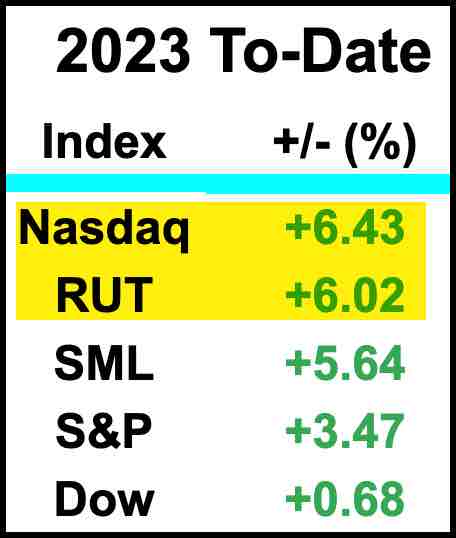 So far so good. But the big story in 2023 is going to be the resurgence in International Equities. Chris Rowe has been all over this story.

In his "Technical Tuesday" column from last week (“The Play for 2023? International Stocks!”) Chris had this to say:

“The pivot to International Equities is the most important shift you can make in 2023.  So far it looks like, although U.S. stocks look good, we should focus even more on non-U.S. stocks.

“Notice how strong the Vanguard Total International Stock Index Fund (VXUS) (Diversified Global Stocks, all Except U.S. Stocks) looks.  It has broken well above both trend lines and confirmed that the old resistance level is a new support level.”

I pulled that quote for the Market Update we send out during trading every Friday. Today I want to add a little meat to the bone.

As I mentioned on Friday, International Equities is in fact an “asset class.”

We break the market down into sectors. The fastest-moving groups are the 45 industry groups (or sub-sectors) – Internet… Semiconductors… Banks… Oil & Coal... Restaurants… Retail... etc.

Above the sub-sectors we have the 11 broad, or major, sectors - Energy… Healthcare… Financials… Technology… Materials...

How slowly do Asset Class rankings change? This slowly...

International Equities entered sixth place (The weakest) way back on March 11, 2020, at the depths of the COVID bear market, when travel had come to a standstill and oil tankers were dry -docked.

The asset class remained in sixth place for eight full months, only leaving the basement on November 5, 2020.

From June 13 until December 2 -- five-and-a-half months it was ranked near the bottom (fourth or fifth) and was then ranked second until Friday, January 13th when it took first place.

How long will International Equities be ranked #1? I don't know. But if history is any guide (and it often is) it could hang out in first or second for quite a long time. Quite possibly throughout the year.

One way to gain exposure to it is through buying one of the ETFs that track the space.

Since then it has retraced almost 25% of that decline, closing on Friday at $41.73. Notice how that price is barely a whisker away from the 50% Fibonacci Retracement level (the blue arrow).

That's hard to make out, I know. Here it is on a larger, 3-month view, highlighted in yellow.

Thank you as always for stopping by.