If you’ve been reading True Market Insider these past weeks, you know we’ve been telling you a new bull market has already begun.

And if you read the emails we receive from readers, you’d know that many folks do not believe it.

Or at least they don’t entirely believe it.

I get why skepticism is running so high. Last year was terrible for stocks. Investors are smarting from losses.

But here’s the thing – when so many people are so bearish – it almost always means we’ve hit a bottom and that there’s nowhere to go but up.

Today, I’ll show you my secret confirmation that stocks are heading into a major rally.

When the S&P 500 posts a gain over the first five trading days, then the year is positive more than 80% of the time.

Should the gains stick through the month of January, then that too would give the odds of finishing 2023 in the green above 80%.

But, as mentioned, many people haven’t gotten the memo that 2023 is poised to be a good month for stocks.

For example, the American Association of Individual Investors.  Each week, they poll thousands of everyday investors, like you and me, and ask them how they feel about the stock market prospects in the months ahead.

And as a common theme, most of the investing herd are either bearish or simply clueless -- meaning they don’t know what to do, deer in the headlights, so to speak, really stunned, confused and frankly, scared.

Only 20% of investors are bullish.  And it’s been around that level over the past few weeks.

These are some of the lowest readings since the AAII survey was started in 1987.

And 38% of investors had no conviction, essentially clueless.  That’s at a 40-week high - so a lot of folks are really clouded with their judgment as to where stocks are headed over the coming months.

That’s a normal feeling after the stock market beat down over the past year.

But let me tell you again, when so many folks feel like this, it is typically associated with a major low.

Our #1 Indicator Confirms Our Bullish Outlook 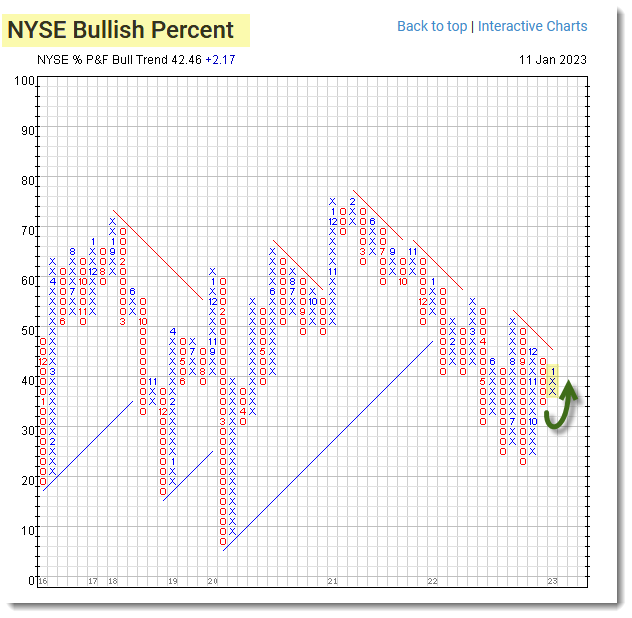 This tells us that Demand has taken control of the stock market over the short-term.

And here’s what’s really notable. The NYSE was the last of the six major averages to flip to X’s on its BPI chart. The other five were already there. 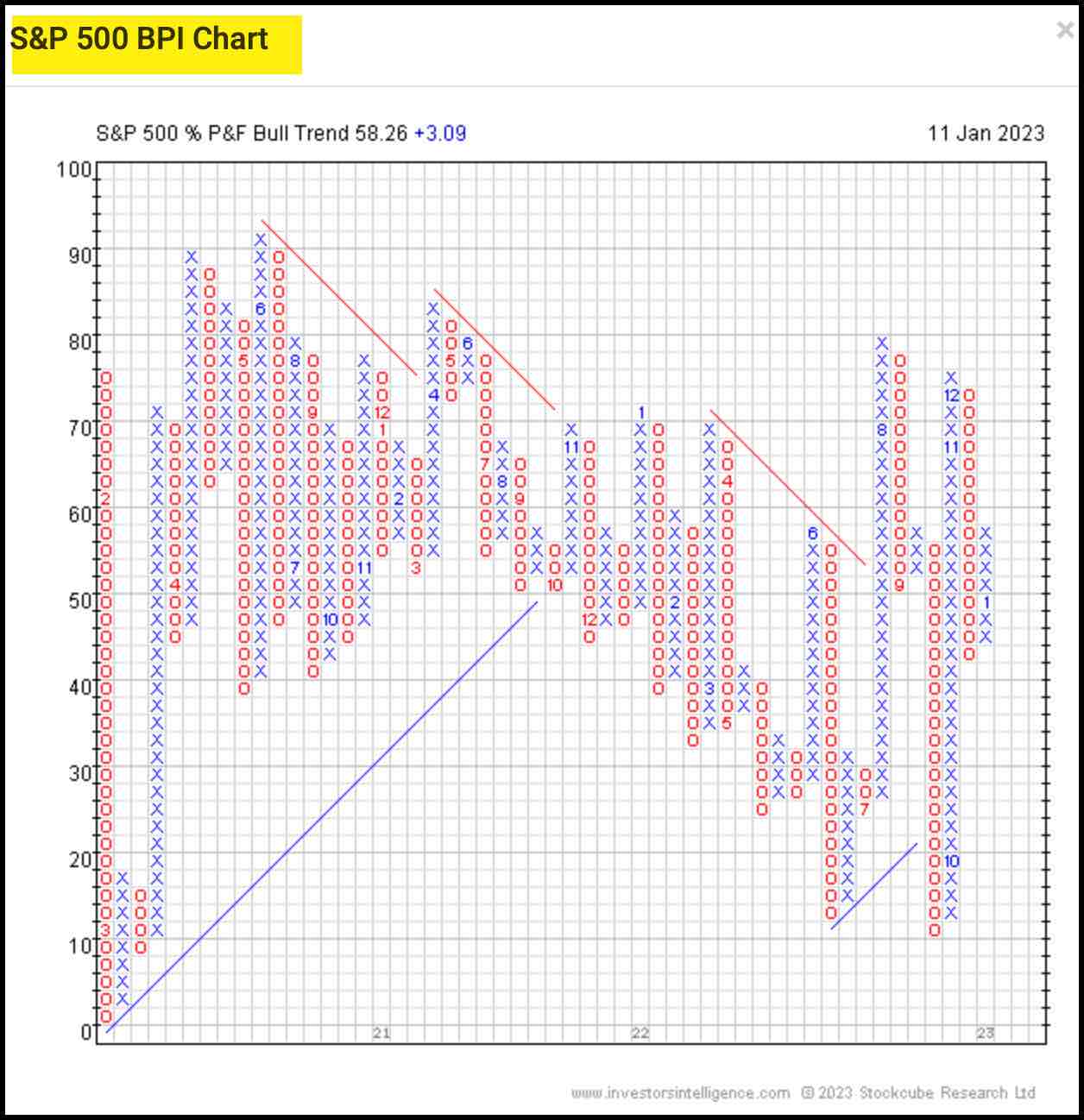 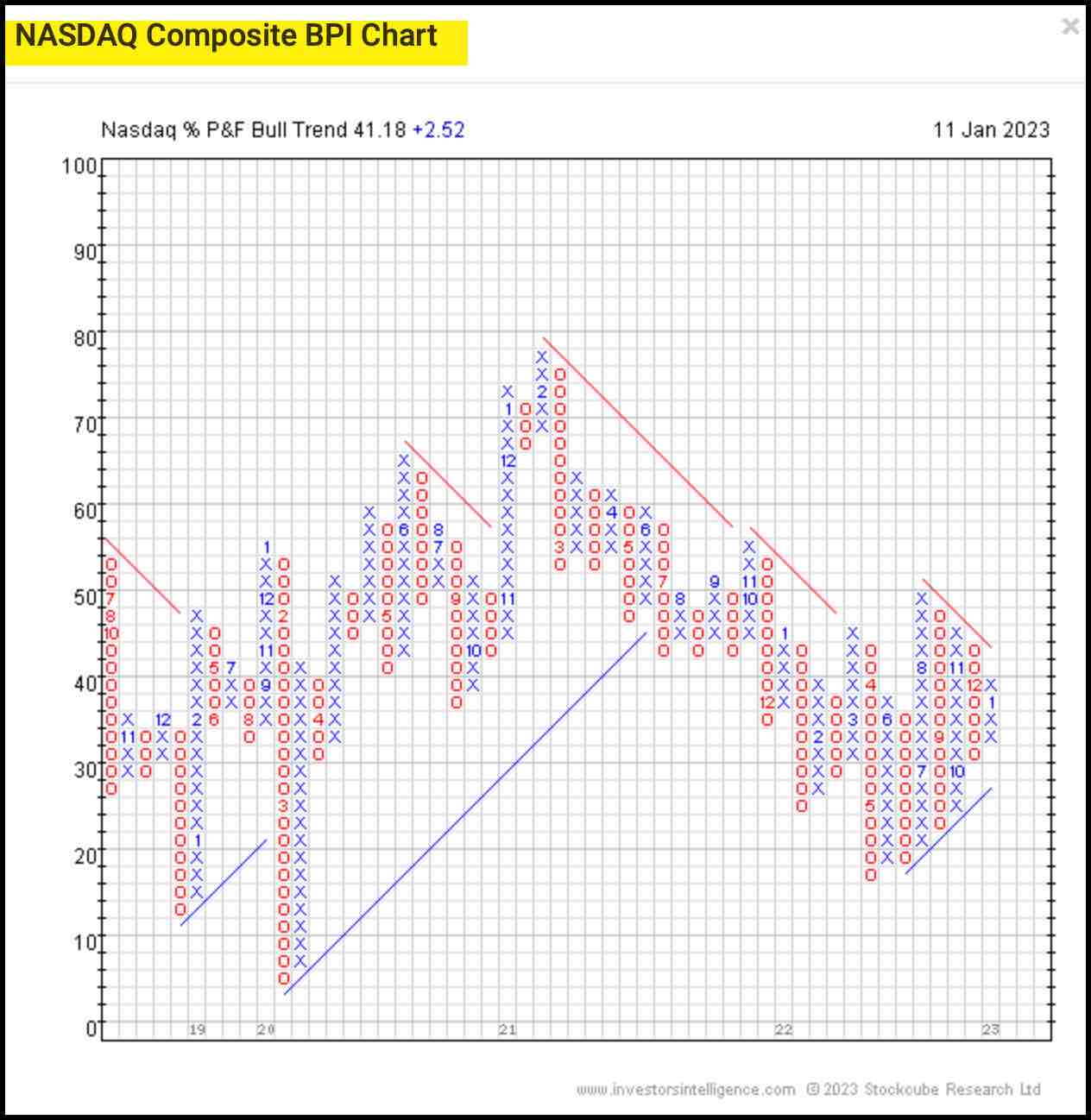 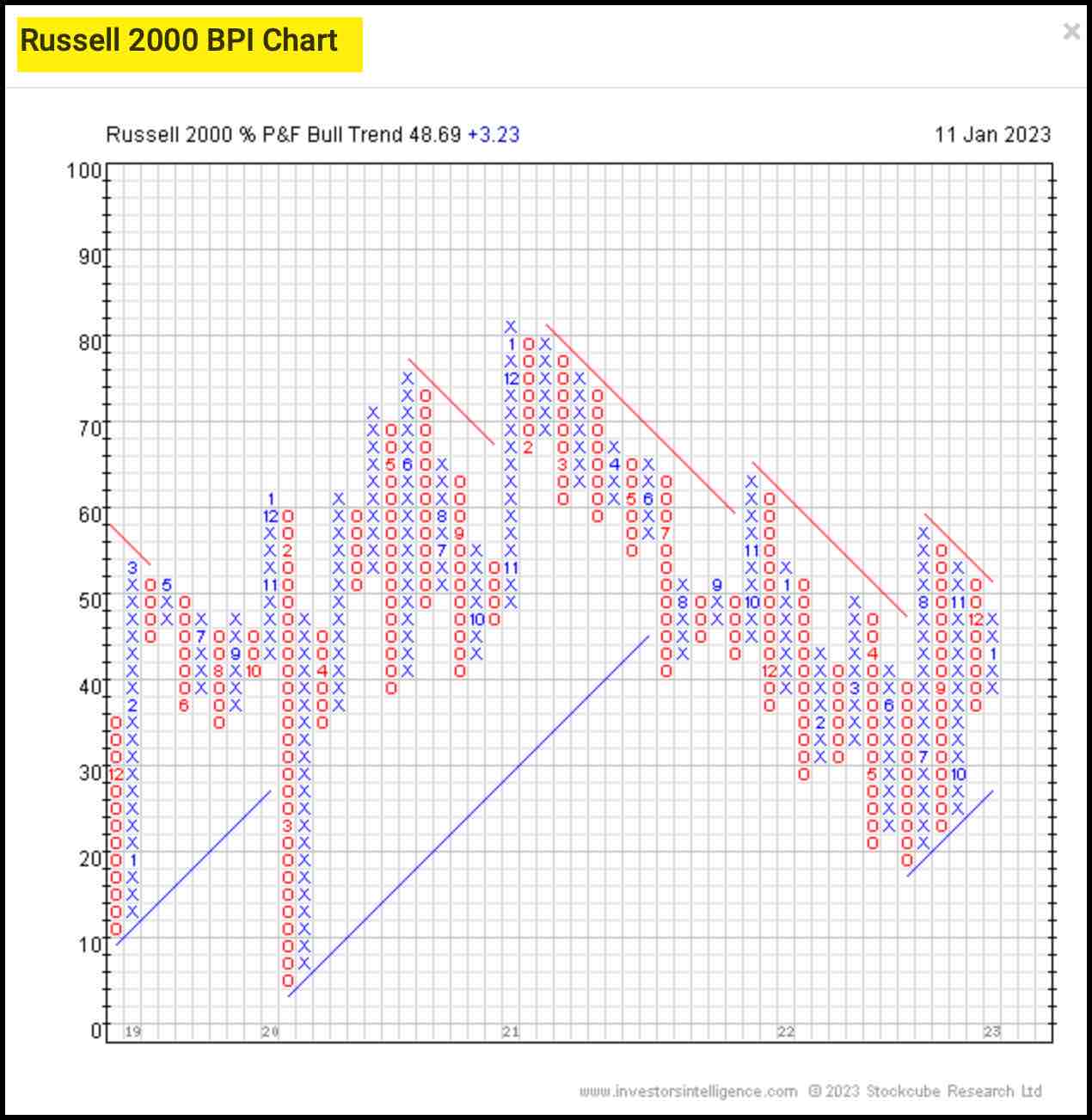 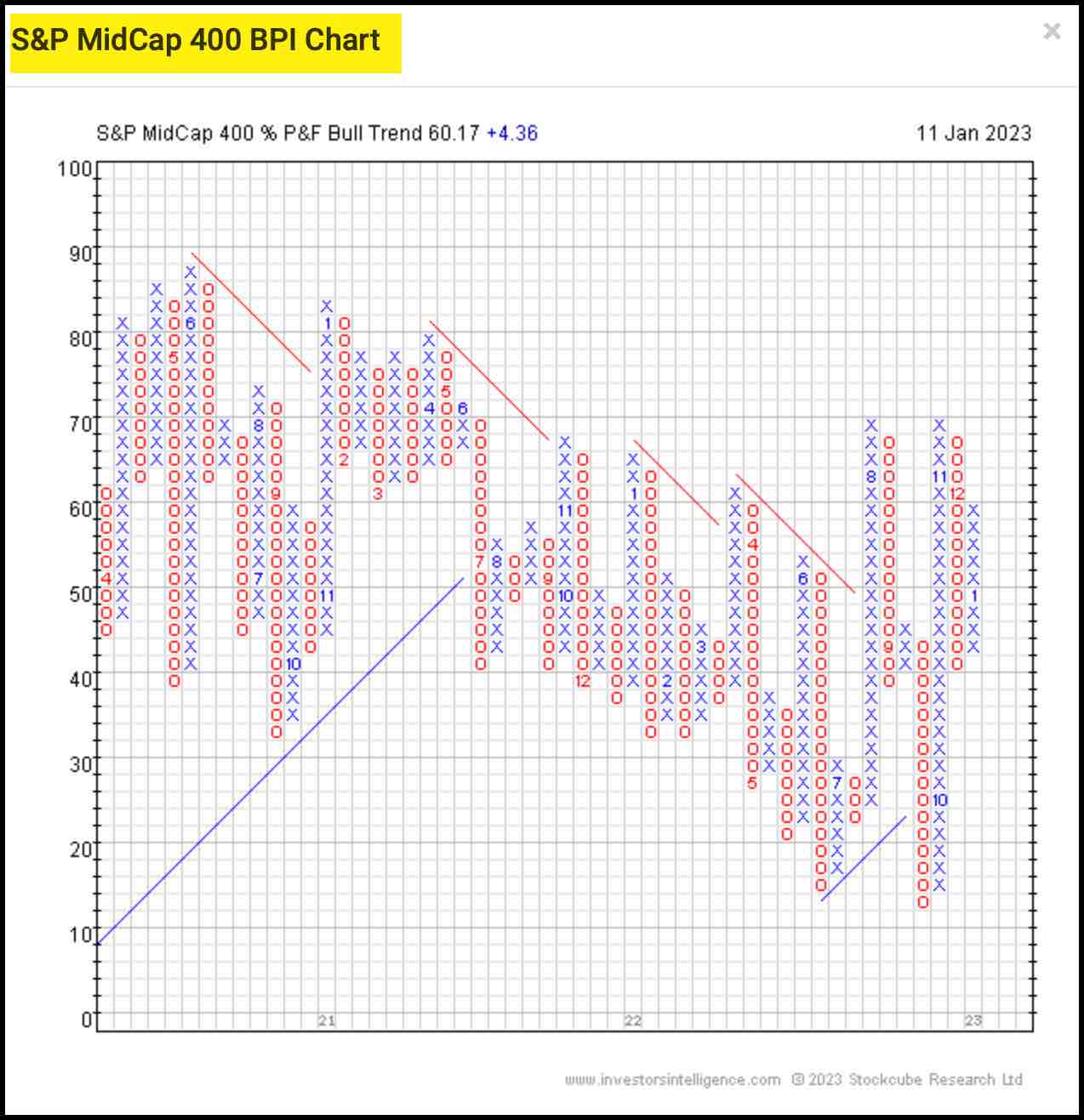 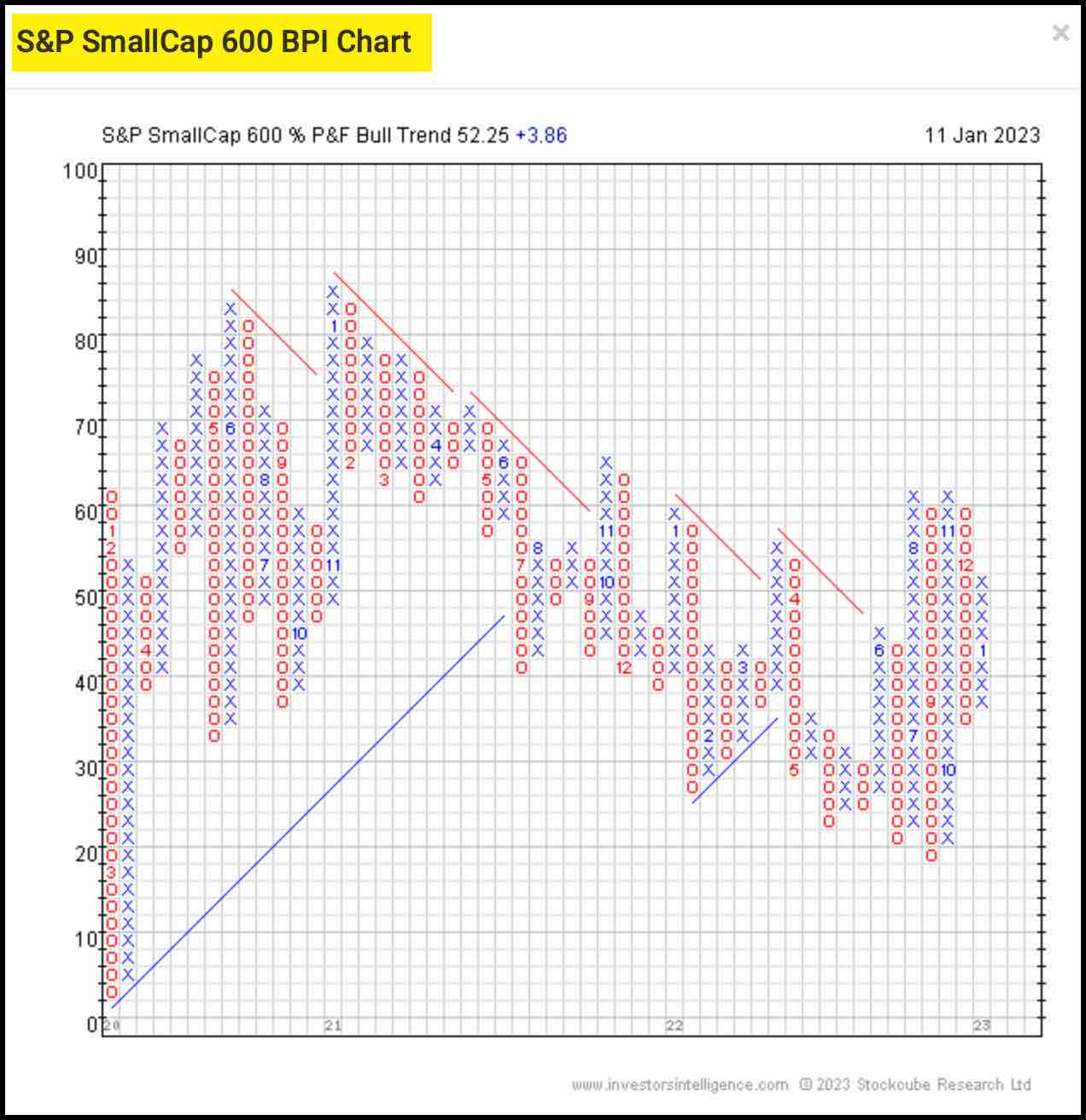 So we’re seeing strength literally across every size and style of equity.

We’re also seeing strength spread out across many different sectors of the market.

Here’s the US Industry Bell Curve. It shows how the 45 sectors of the market stack up.

To fully appreciate the bullish change that’s happening in the market, you just need to look at the Bell Curve from December 30 of last year – just seven trading days ago.

The “scores” were reversed. Then, the Bulls controlled just six sectors and it was the bears who controlled 39.

It’s called the “NYSE 52-Week Hi Lo Index and it shows a ratio of the number of NYSE stocks showing new 52-week highs in a Monday-Friday week, divided by the sum of the total new highs and new lows, smoothed using a 10-week moving average

But to cut through all the jargon, when the current column is in X’s and rising (like it is now), that’s very bullish for the stock market looking forward. 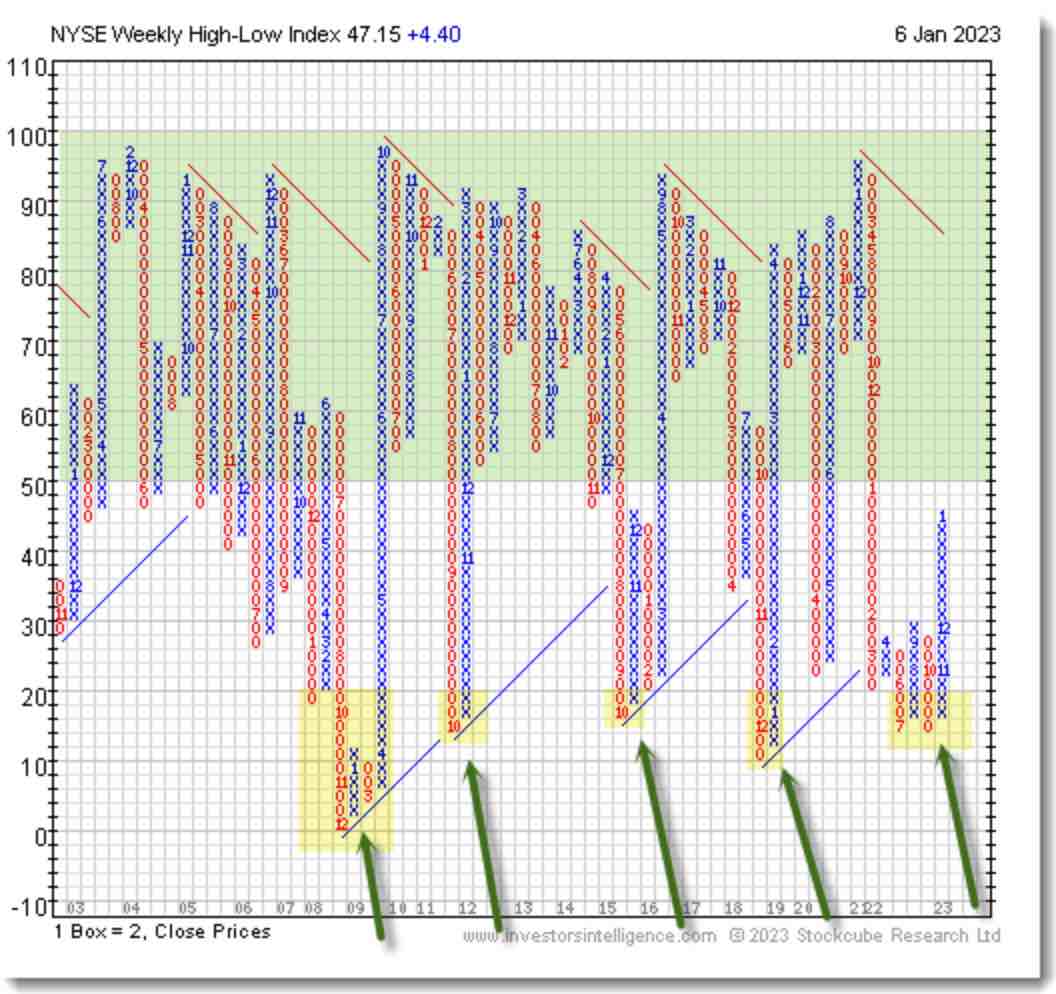 Readings below 20% (yellow highlight) are RARE.

We saw it happen during the great credit crisis of 2008.

It happened again in 2011, the final decline in the housing market.

It happened during the earnings recession of 2015 and the plunge in oil prices.

And again in 2018 that culminated in the “Christmas Eve Massacre.”

And recently, during the bear market of 2022.

Notice how, every time the chart fell below 20%, a ferocious rally ensued.

Now let me tell you that every trip down to this level prior represented a MASSIVE opportunity to make huge gains in stocks.

The sweet spot is when the index rises above 50% (the green shaded) area on the chart.

That tells us that more than half of the stocks in the NYSE are hitting new 52-week highs – the stock market does very well during those times when the index is in the green area.

And every prior dip below 20% has resulted in the index rising above 50%, the green zone.

Currently it's 47% and rising. Sweet spot here we come!

Here are a couple of stocks to look at that have recently hit 52-week highs.

Schlumberger Limited (SLB) is breaking out to new highs. 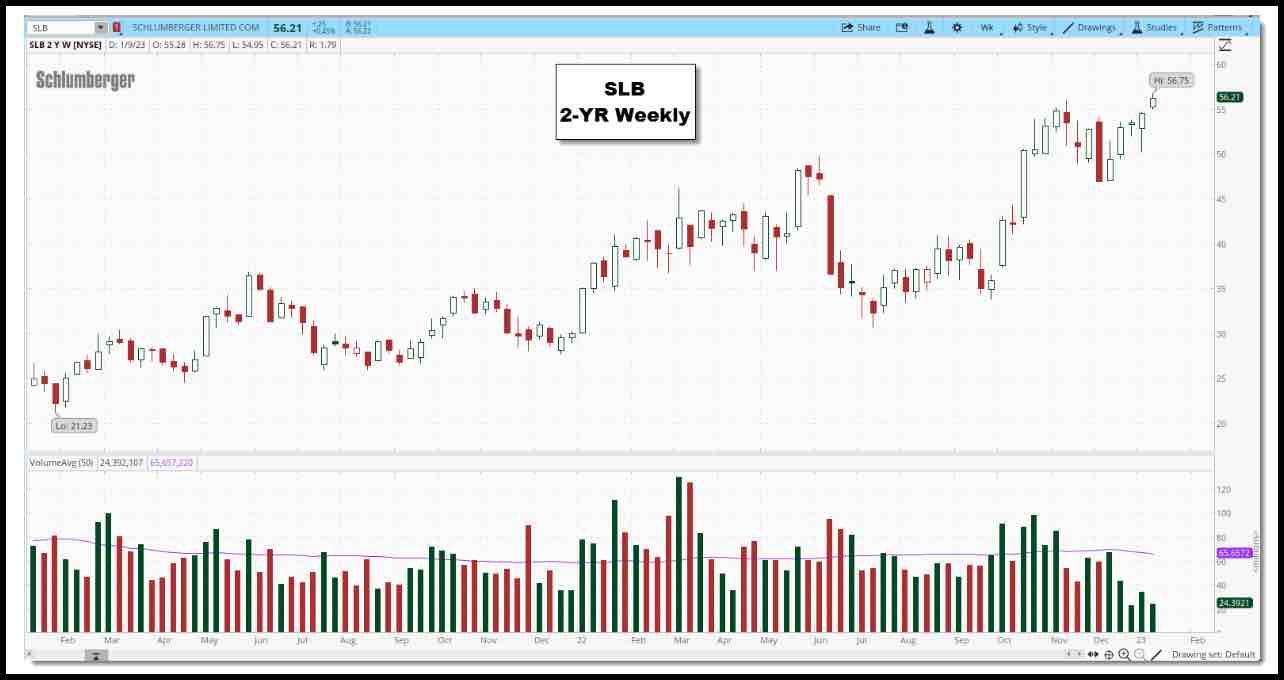 As is Aflac Incorporated (AFL). 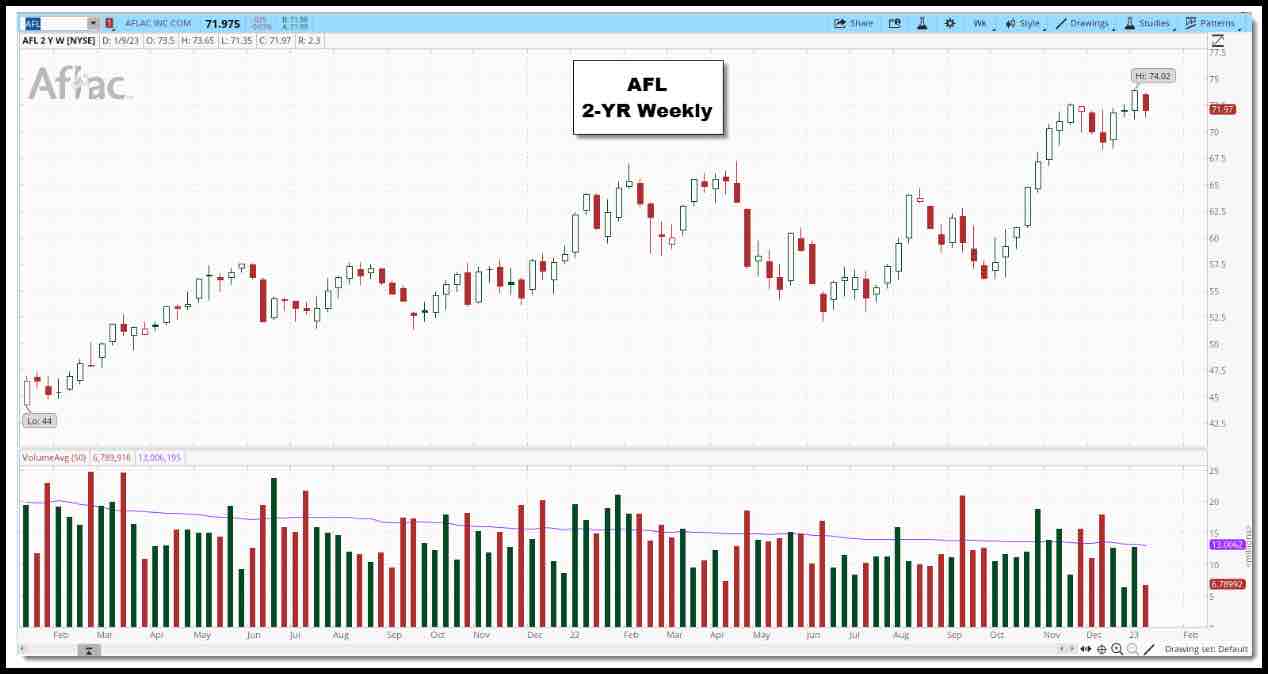 So don’t get stunned, don’t be the deer in the headlights.

Instead, get used to seeing chart patterns like the two I showed above.

Because there are great returns to be had right now.

All the stars are aligned, and demand is in control.

It’s time to be long and strong…

Stocks are set to rally and probably go on to post strong gains in 2023.

Here’s to a great year!