The markets were closed two Mondays in a row thanks to the holidays...

And I missed you!

At the start of our most recent conversation, back on December 19, I mentioned spending Christmas at an AirBnb in upstate NY.

That trip never happened. Instead I spent the holidays on my sofa, laid low for two weeks by COVID.

I've had pneumonia... Mononucleosis... Strep... you name it.

None of them holds a candle to COVID. This thing knocked the hell out of me.

What was interesting was that after I tested positive, my doctor prescribed... nothing. "Go home, rest, and let your body do its thing," he said.

I gotta say, I was a little disappointed. I wanted some sort of "cure." Some kind of magic bullet.

That episode got me thinking about medicine, treatments and drugs. And as it happens, the Biomedics Genetics industry group was moving up the sector relative strength rankings just as I was having these musings.

The day of my diagnosis (December 26) the sector was ranked #3 out of the 45 sectors we track on our Sector Relative Strength Matrix. On December 30 it moved into the #1 position, where it remains. 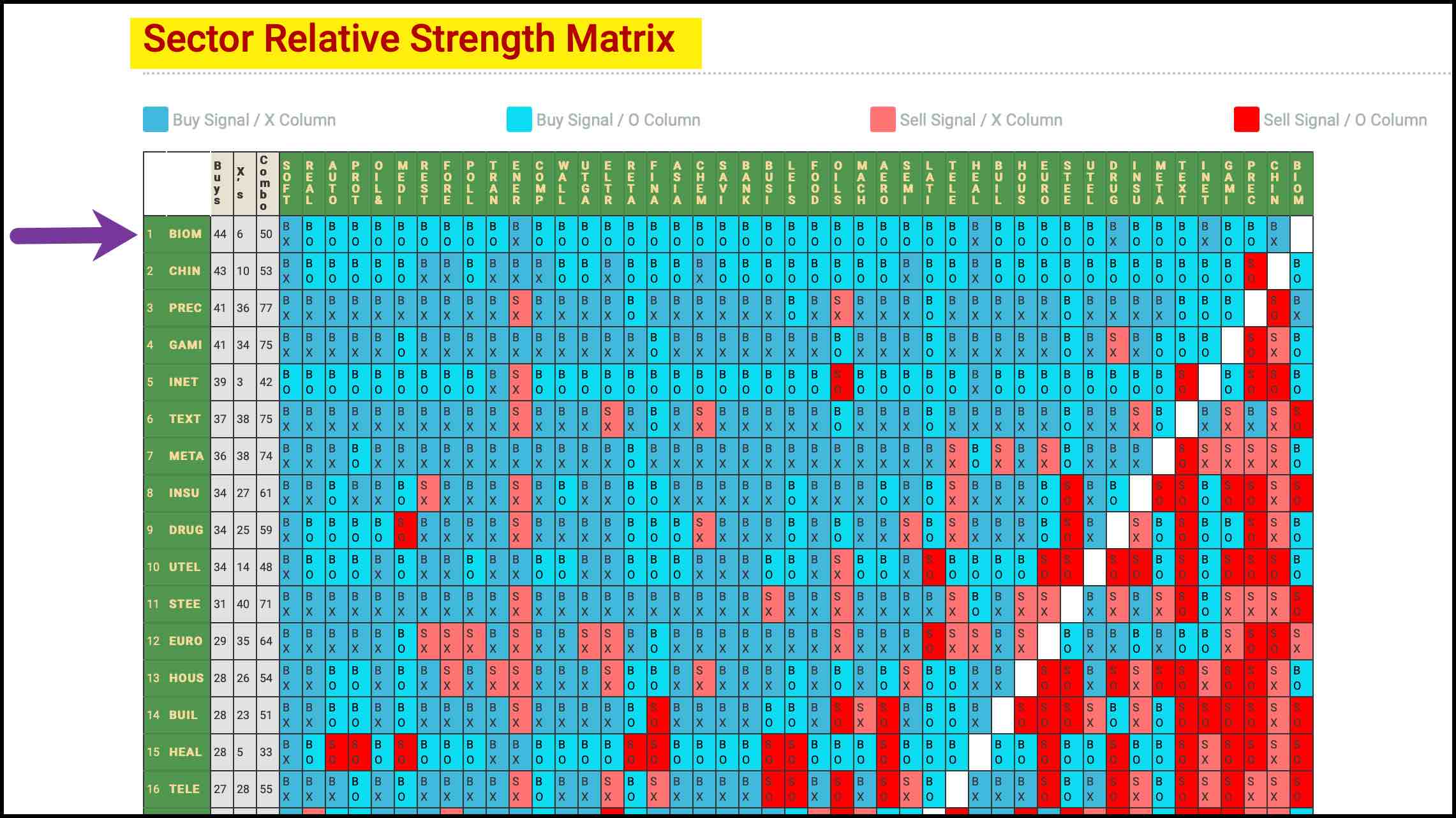 This is a notably volatile sector, filled as it is with early-stage companies, many of them small- or micro-cap stocks.

So unless we're investing in a Merck or a Pfizer, investments in this sector are always a bit speculative. Today's Monday Micro-Cap is no exception.

Vigil Neuroscience, Inc. (VIGL) out of Cambridge, Massachusetts operates as a subsidiary of Amgen Inc.

The company is working to develop therapeutics for rare and common neurodegenerative diseases.

Its lead product candidate is VGL101,  which is in Phase I for the treatment of adult-onset leukoencephalopathy as well as cerebral adrenoleukodystrophy and Alzheimer's disease.

VGL101 is currently in Phase I of the clinical trial gauntlet.

The company's strategy is to first develop treatments targeted to specific, small populations, such as patients who have been shown to have a rare form of an ailment. Then, the company plans to expand its program to target larger populations. 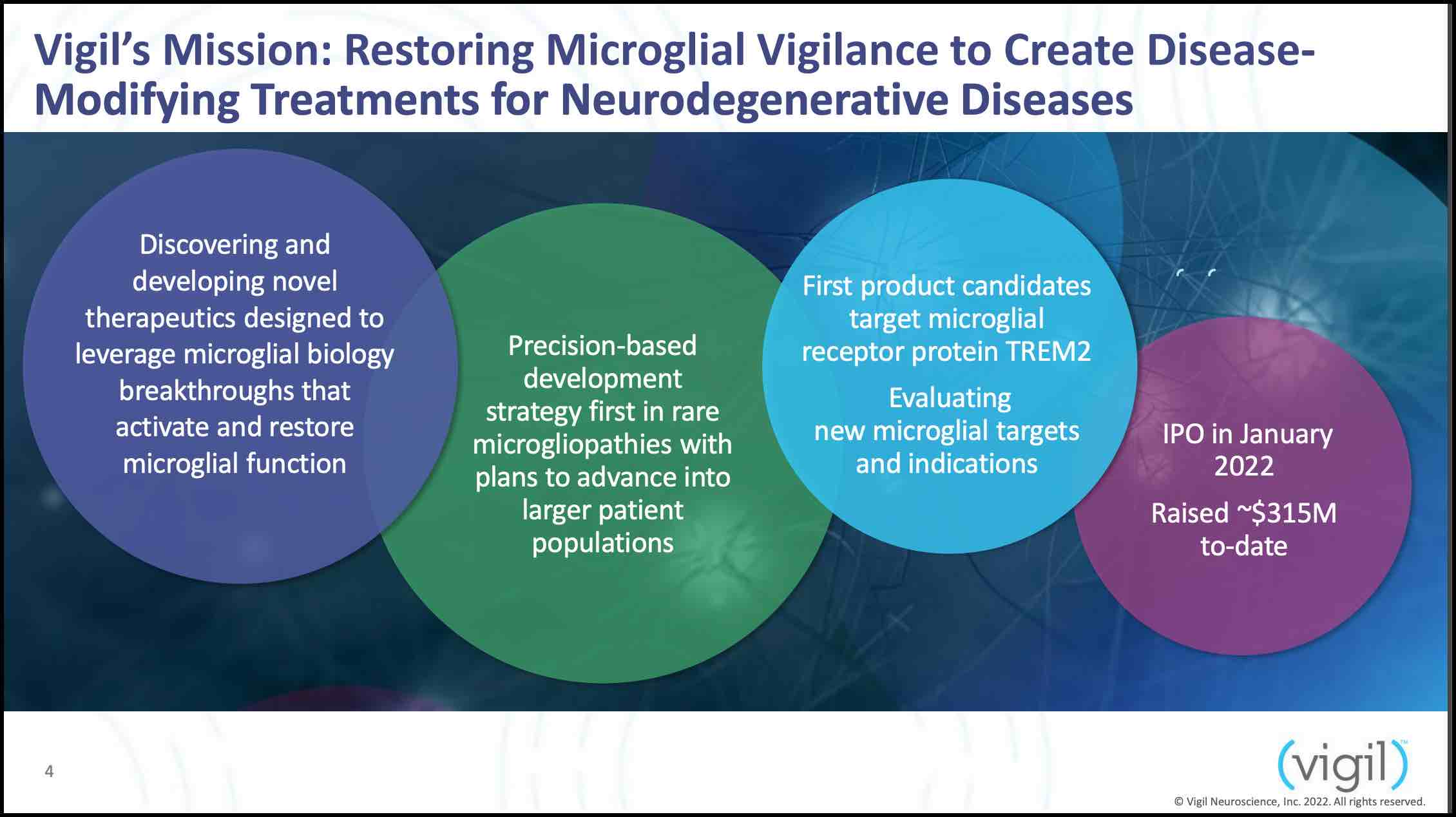 Some of the diseases VIGL is targeting are in fact rare. One of them, axonal spheroids and pigmented glia (ALSP), is an inherited neurological disease that affects an estimated 10,000 people in the US, with about 1,000 – 2,000 new cases presenting every year.

Alzheimer's on the other hand is hardly rare. More than six million Americans suffer from the disease.

VIGL is developing therapeutics that target something called "TREM 2," which is a receptor existing on the brain. According to the company, "compelling evidence for the critical role that TREM2 plays to prevent neurodegeneration comes from studies linking mutations causing TREM2 deficiency with neurodegenerative diseases." 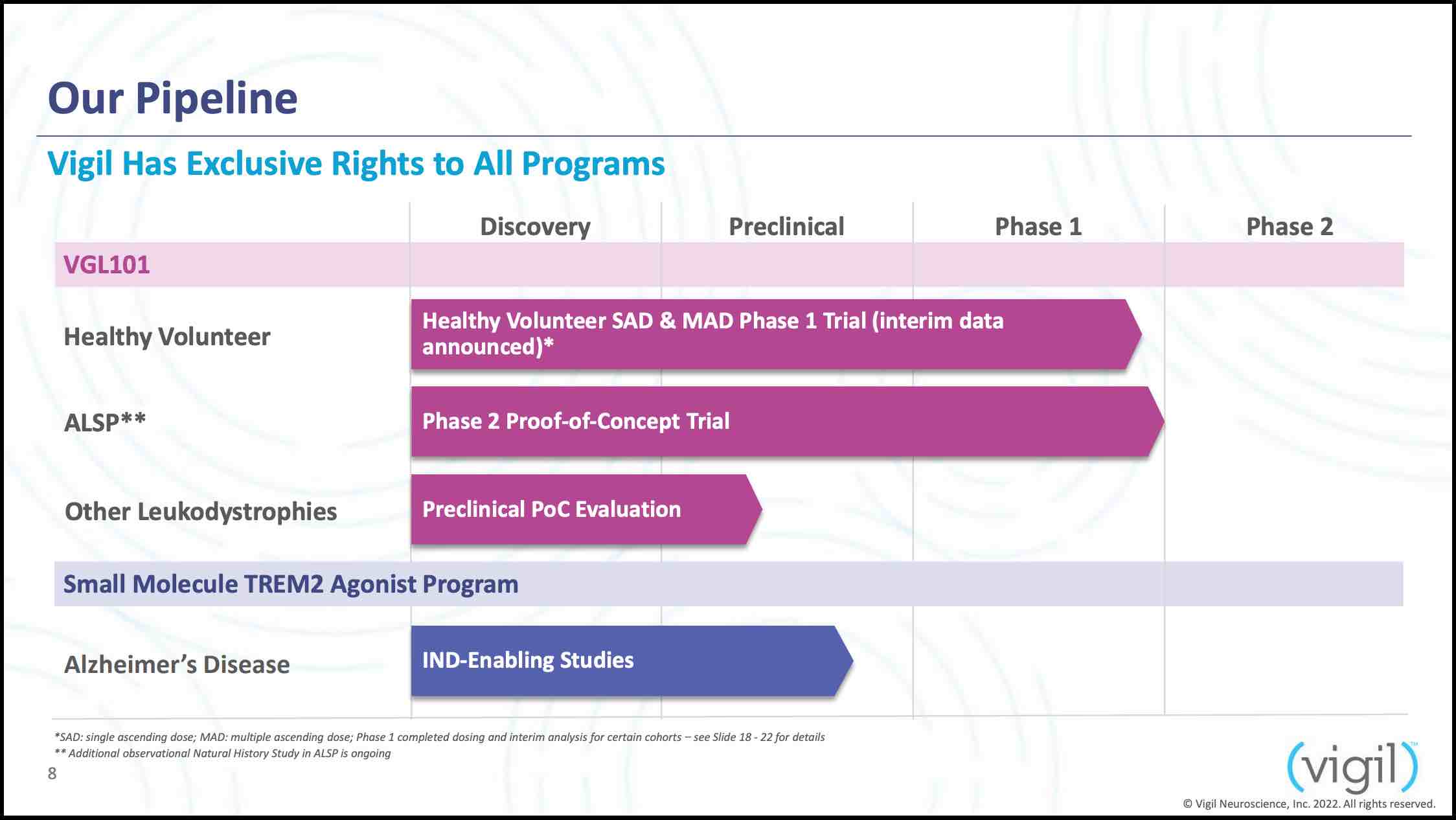 It bears repeating, this is an early-stage biotech, so expect volatility. But there are some encouraging signs. 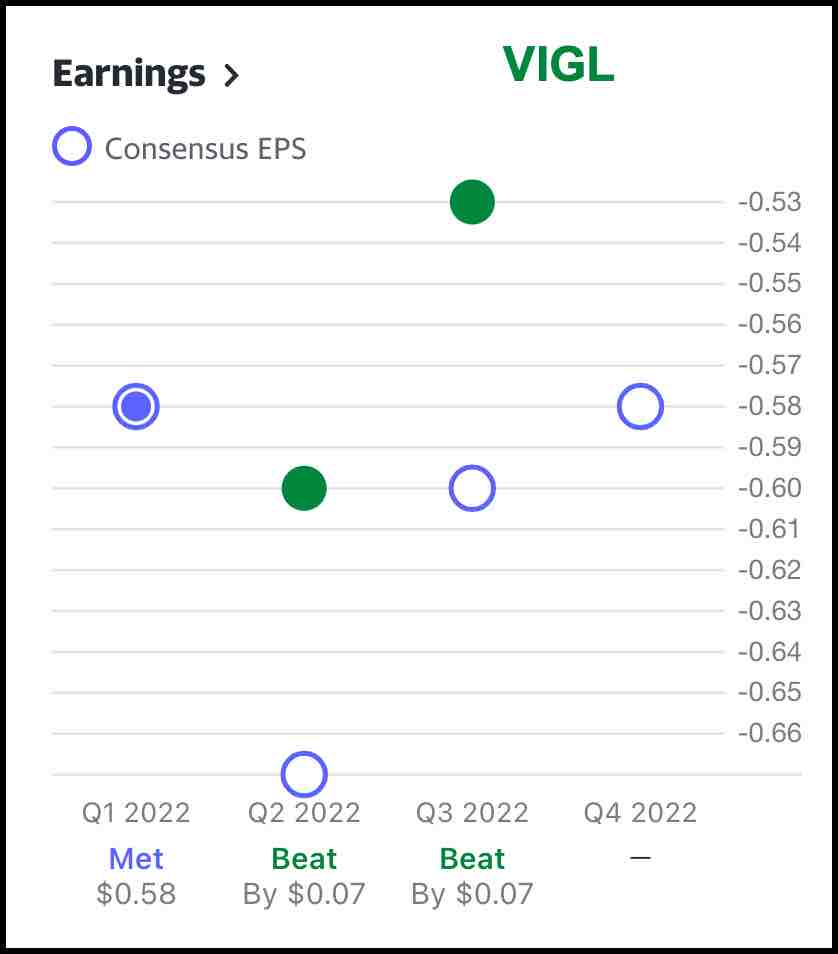 By the way, beating expectations is not the same thing as earning a profit. VIGL has no profits, which is why the earnings expectations shown on the right side of the image are all negative. The company beats expectations by losing less  than expected.

But with early stage companies, losses are fully expected. The good news is that management is holding costs down, thus lengthening the "cash runway" available to the firm.

Now, a play like this one requires a tolerance for volatility and a willingness to take the long view. That said, volatility can work in your favor. The stock can shoot up suddenly only to fall back just as suddenly.

Right now VIGL looks great on the Position Key, one of the tools that comes bundled with Sector Prophets Pro, our sector research and data platform.

Those blue arrows tell us that the sector is strong versus the market, and the stock is strong against the market as well.

Right now, the big institutions are accumulating positions in VIGL, although sporadically. 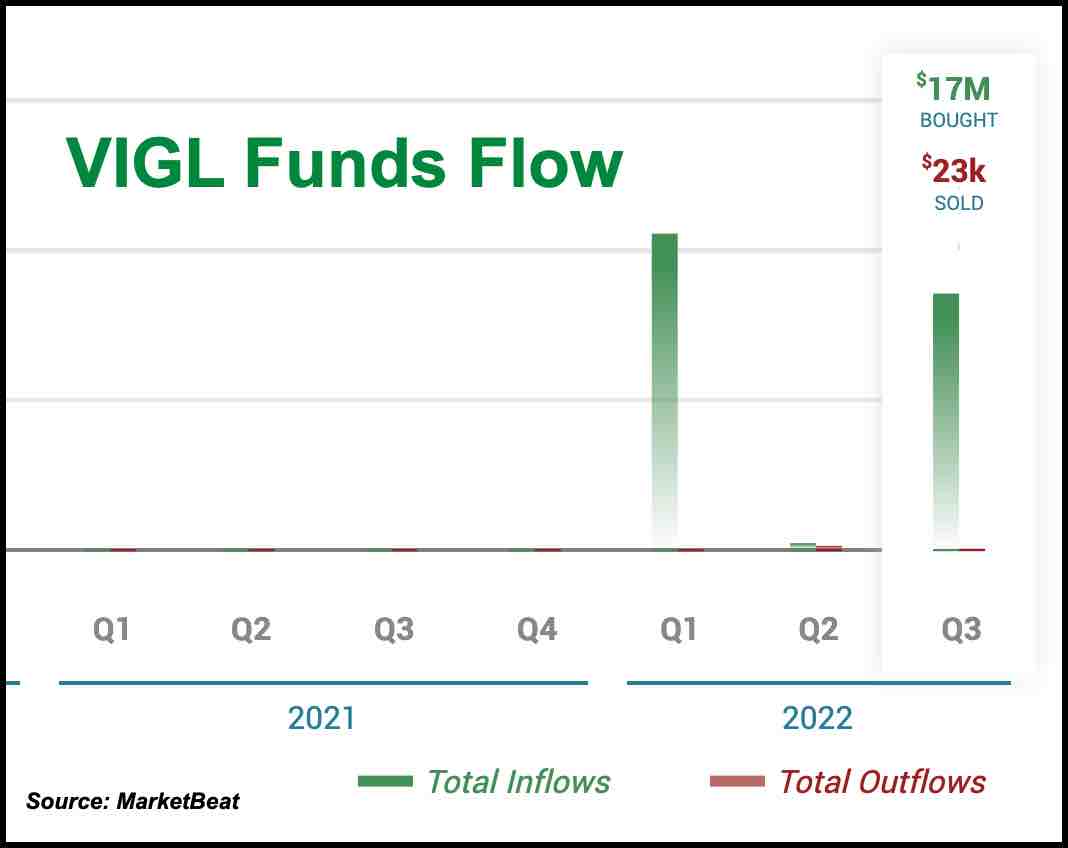 Over the past three quarters, the big funds have purchased $38.38 million worth of VIGL and have sold just $231 thousand. That's a buy/sell multiple of 166x.

But, curiously, the number of funds participating has declined by 60%, from 79 funds a year ago to 29 funds today. I'm not sure what to attribute that to. Usually, the dollar amount of accumulation tracks the number of sponsoring funds.

It could be that the remaining funds have a high level of conviction in VIGL.

You can see how the stock has been trading in a horizontal channel between about $10.00 and $14.25. That's easier to see once we zoom into a 3-month view.

After falling -88% (from $18.27 to $2.18) between February and early May, the stock has re-traced most of those losses, moving in a staircase pattern.

Our first price target will be that longer-term high of $18.27 from February 17. That's about +53% higher than where the stock is today. That price also coincides with the 100% Fibonacci level (the lower purple arrow).

I'm very interested in this company and its therapeutics, so you can expect to hear more about them in future articles.

Thank you as always for stopping by, and Happy New Year.