Here's Your REAL Wave - And It's BLUE

Well, we now know the results of the midterm elections. And there was no "red wave."

But as you're about to see... there was a blue wave.

The image below is the US Industry Bell Curve (courtesy of Sector Prophets Pro). It shows which of the 45 sectors that we monitor are in the hands of Demand (the bulls)...

And which are in the hands of Supply (The bears).

If you can see any red in that image, you've got better eyes than I do.

It's nothing but bullish strength all across the stock market.

Sector Internals (aka sector breadth) tells us when to invest, while Relative Strength tells us what to invest in.

Right now the internals are saying "go bullish." What is Relative Strength saying?

Here's another tool from Sector Prophets Pro. This one is called the Sector Relative Strength Matrix. It ranks all 45 sectors from strongest to weakest. 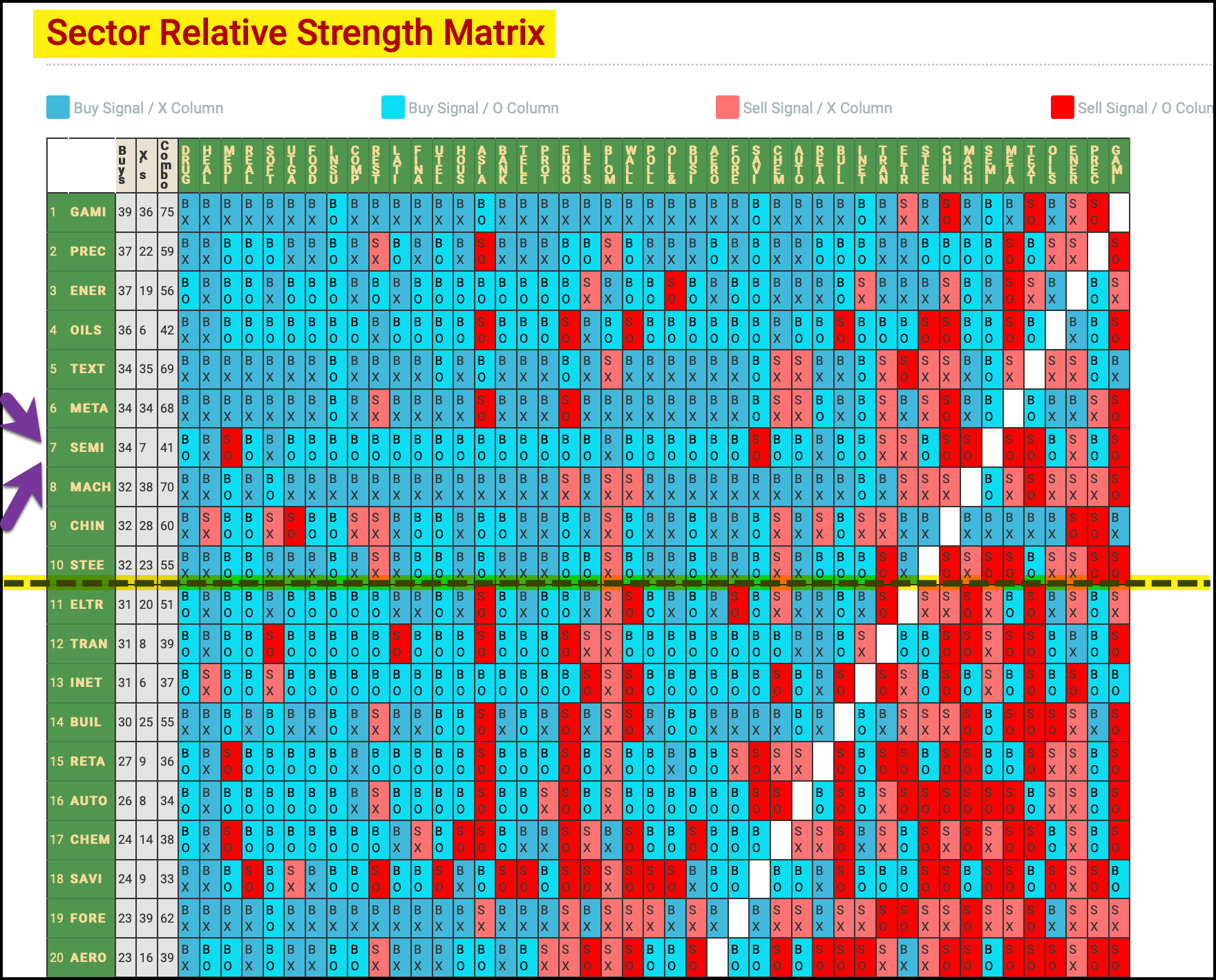 At right in the "sweet spot," the top ten, we find the Semiconductors sector (SEMI). They're ranked #7. Earlier in the week they had moved to #1, before the market got some bad news from MU (more in a second).

All told, the Semi’s just had a banner week, with the sector posting the best weekly gain in two decades from Nov 7th to November 11th.

Take a look at the three-year weekly chart of the VanEck Semiconductor ETF (SMH). It gained +15% this past week. That’s the best weekly gain since October 2001. 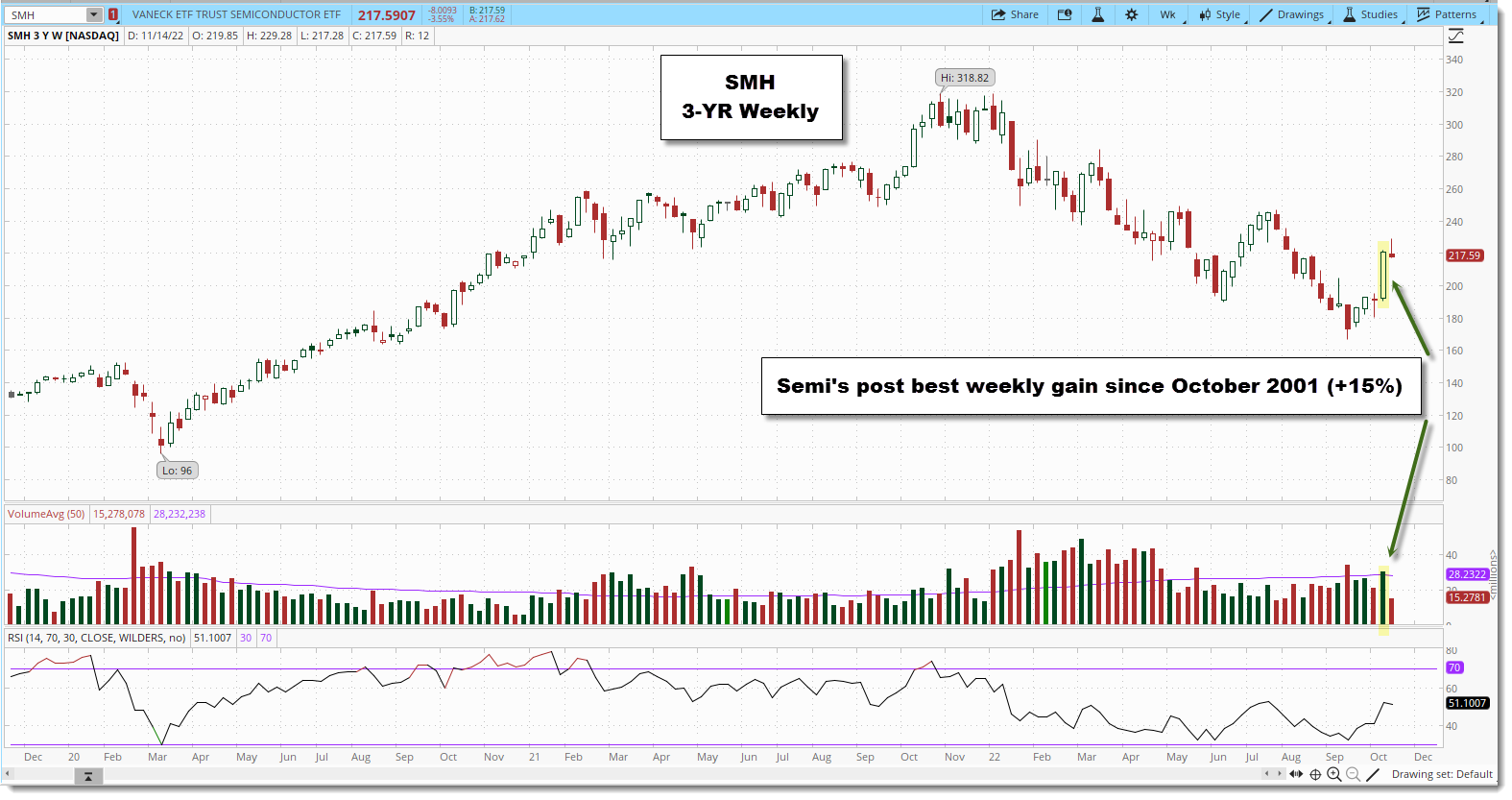 And the most exciting thing about this massive move is that a special group of individuals (just like you) got early notification that massive amounts of capital was being deployed by the most influential institutional investors in the world.

Sector Prophets picked up on that institutional buying activity within this industry group as early as Tuesday November 8th - Election Day!

This alert was very bullish for the sector, and told us that demand is in control.

OK, we know what to buy at the sector level -- the Semis.

We can drill down farther.

Micron (MU), the massive memory-chip maker just warned of higher inventory levels and weaker sales projections for 2023. As you’d expect, a sour note like that dragged down MU and the industry group in yesterday’s session following the warning.

According to Dow Jones News, "The company said it expects production starts of wafers for the two major types of memory chips, called DRAM and NAND flash, to be about 20% lower than in the recently ended quarter. Micron said it is working on further cutting capital expenses."

Now you may think that’s bad news, but it’s actually great news. That's because it offers us the opportunity to buy the best-performing stocks within this sector on a pullback.

The semiconductor industry is wide ranging, and includes memory chip makers (like Micron), to semiconductor equipment manufacturers, to diagnostics, to programmable chips, to graphics chip processors, to mobile technology, autonomous vehicles technology, and on and on.

Micron is not one of them. In fact, this stock is a negative downtrend -- yuck. 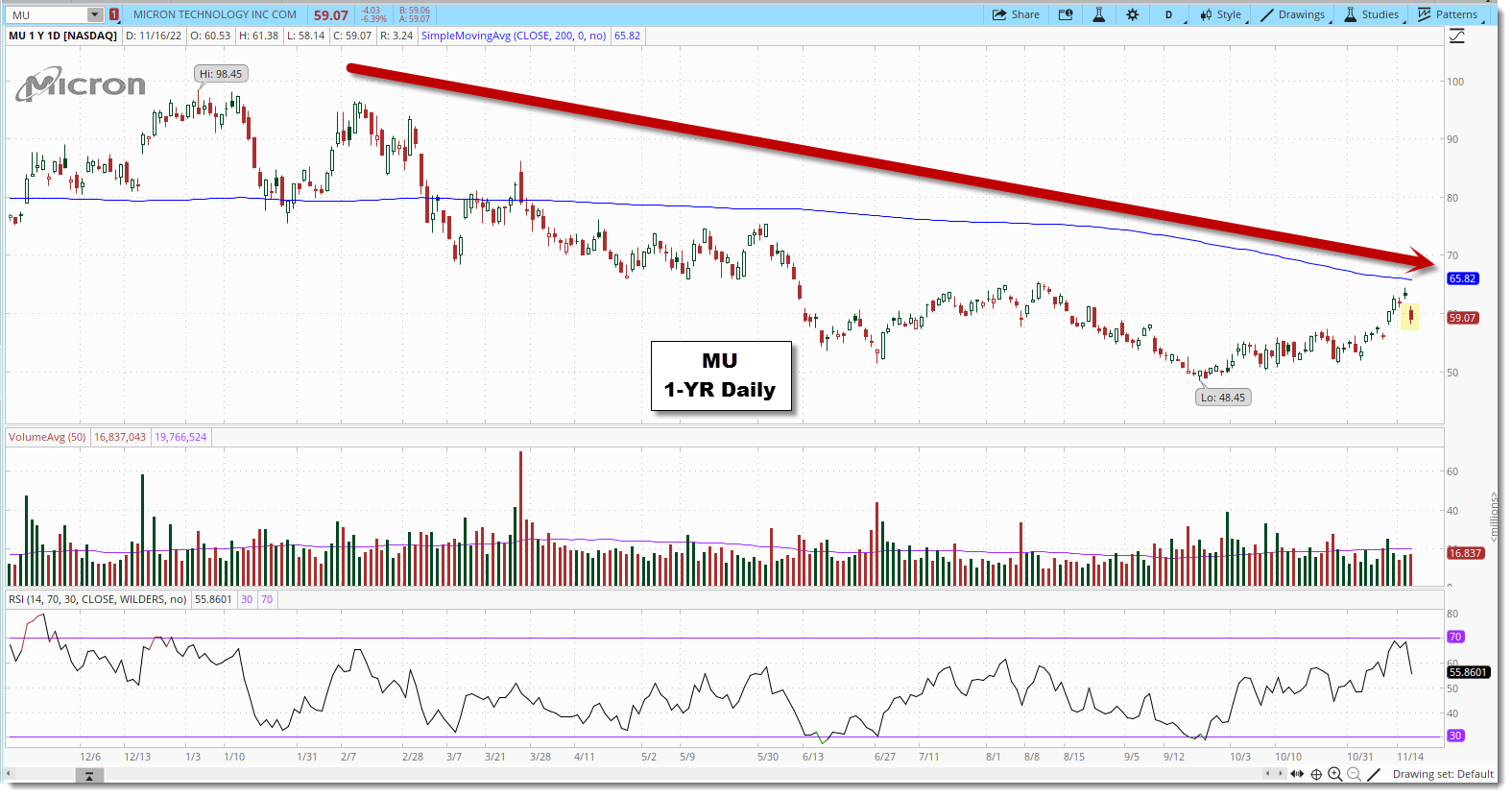 Instead, focus on strength. It’s easy to identify the strongest (and weakest) performing stocks and ETFs using the Sector Prophets platform.

And today, you get a special treat, one of the best-performing Semiconductor stocks.

The stock is: Impinj Inc. (PI) 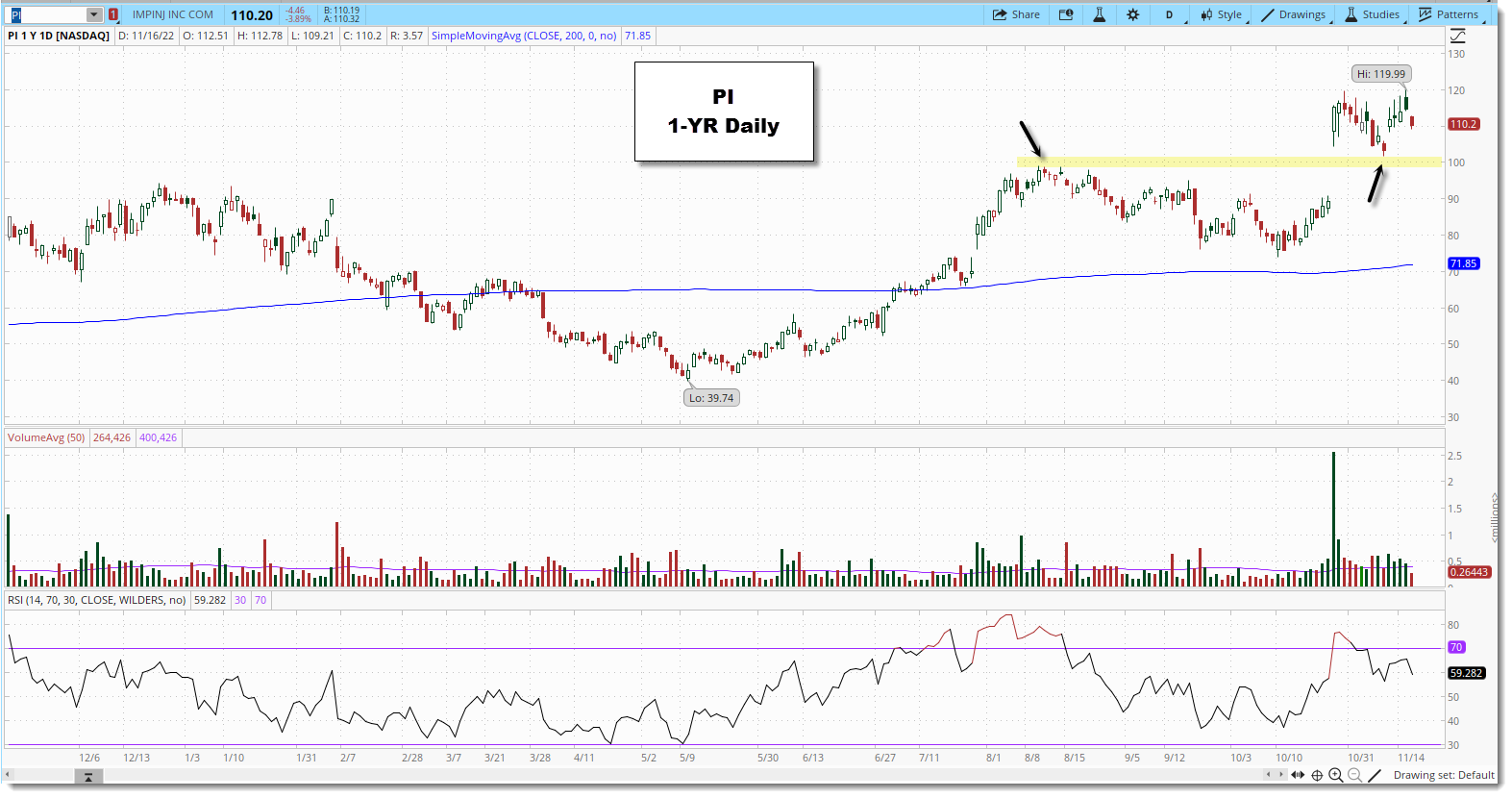 You can see where it gapped up dramatically on massive volume. And you can see that the stock had recently broken above a key resistance level near $100.

Also, it pulled back yesterday with the Micron warning. That’s good news for those that want to pick up a strong stock at a lower price.

Do you have time for one more image from Sector Prophets?

This is how PI looks on the Position Key, which shows the key technical attributes of both the sectors and the stock.

From left to right the four blue arrows tell us everything we need to know.

The first arrow says that the sector's BPI chart is on bull confirmed status -- the strongest possible designation for this medium-to-long-term breadth indicator.

Finally, the fourth blue arrow shows that the stock itself is outperforming the wider market (Market RS is Strong).

And there you have it!

Got Sector Prophets? You should.