With a valuation north of $1.4 billion, today's featured stock is more of a small-cap name. In fact, it's a member of the Russell 2000 small-cap index.

I first began following Uranium Energy Corp. (UEC) back in the early spring of 2021. I recommended it to readers of my then-pair service Founder's Forecast.

The stock is a member of the #7 ranked Metals Non Ferrous industry group.

Before we dig into that, let's look at how the market performed during the busy midterm election week past. 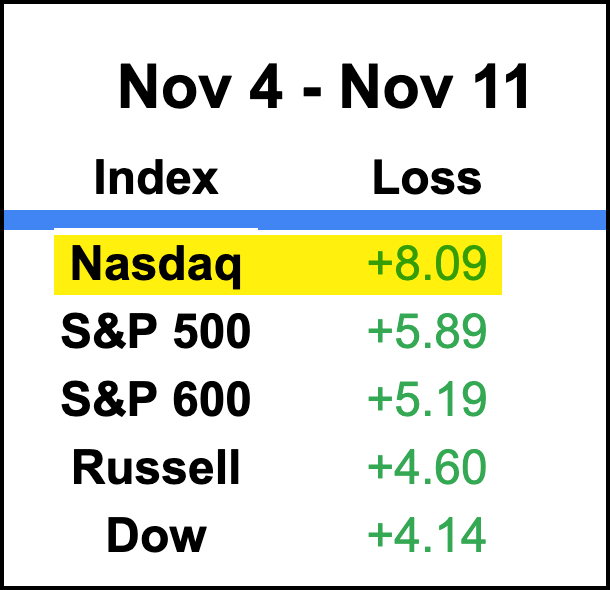 A lot of that stellar performance was logged on Thursday, when the Dow Jones Industrials staged its amazing 1,200 rally and the S&P 500 was up 5.5% on the day (the 15th largest one-day gain since 1950).

When we look at the "internal market" we see nothing but strength. The bullish percent index (BPI) charts for all major averages are in rising columns of X's, signaling short-term strength.

Three of the six are also on point-and-figure Buy signals -- which indicates medium- to longer-term strength as well.

Our "granddaddy" of all indicators, the New York Stock Exchange BPI is in X's. 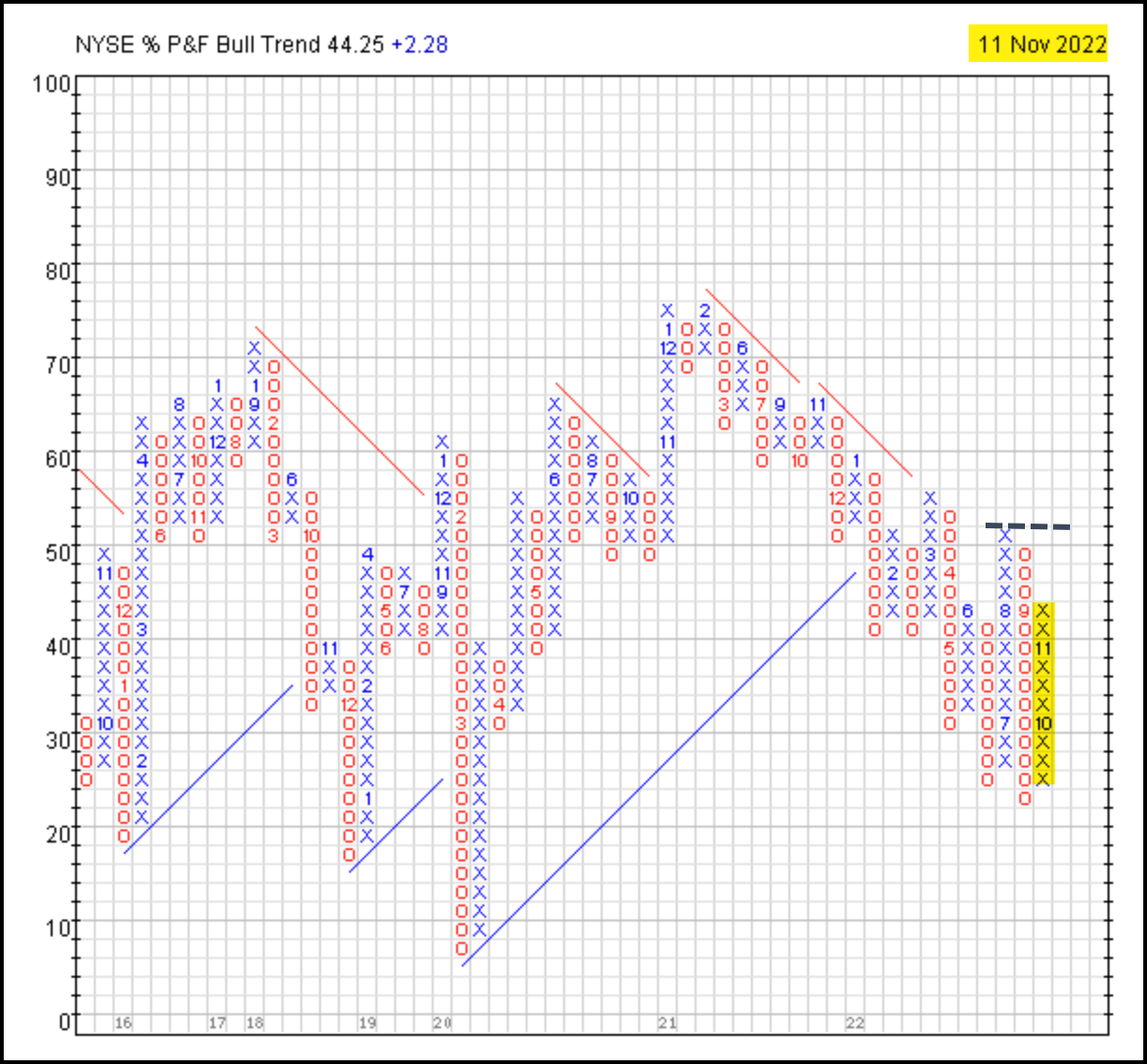 If it gets high enough to pass the dotted black line, it will go on a Buy signal. 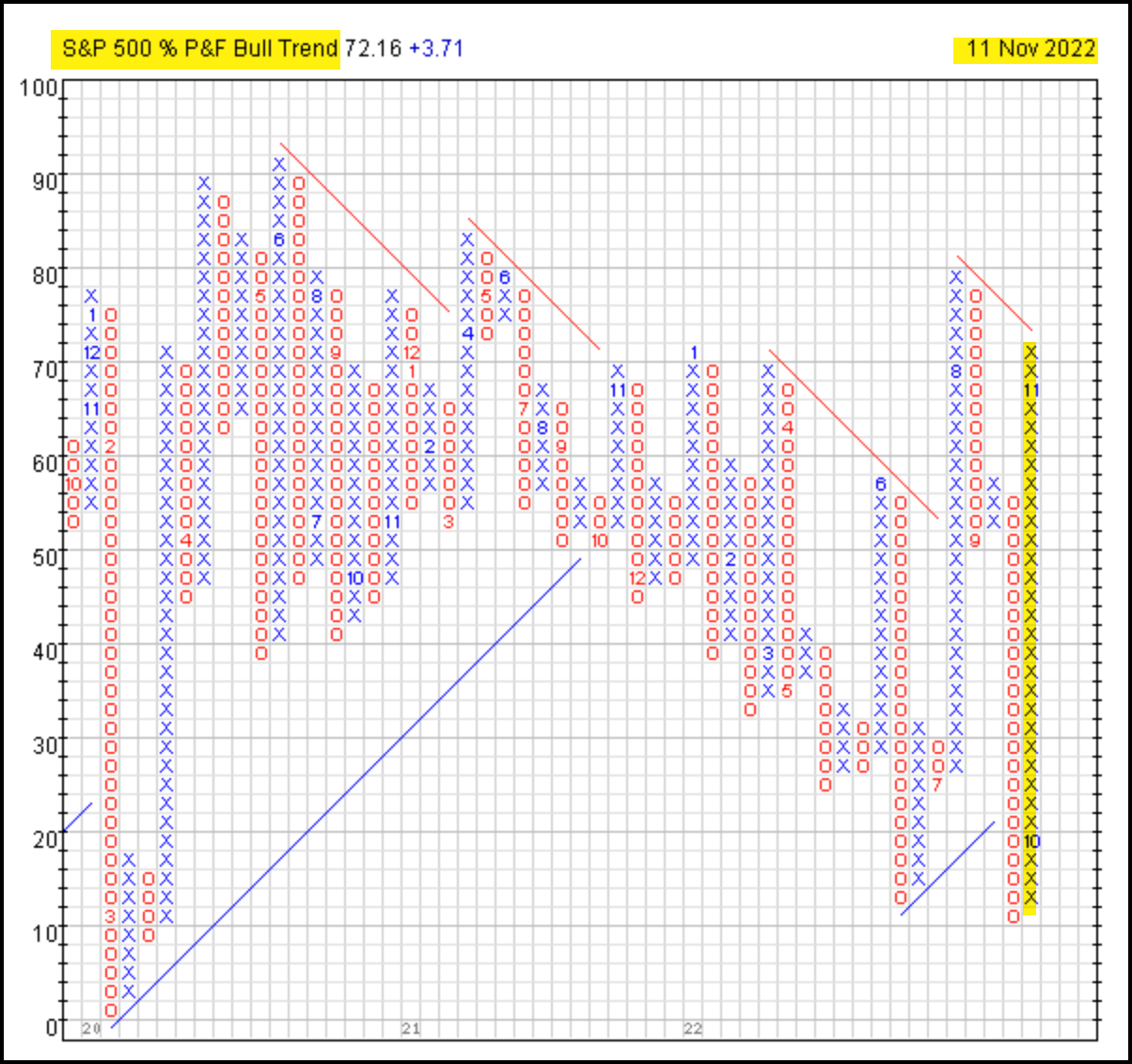 Mid-caps are strong, as you can see in this view of the video showing S&P 400. 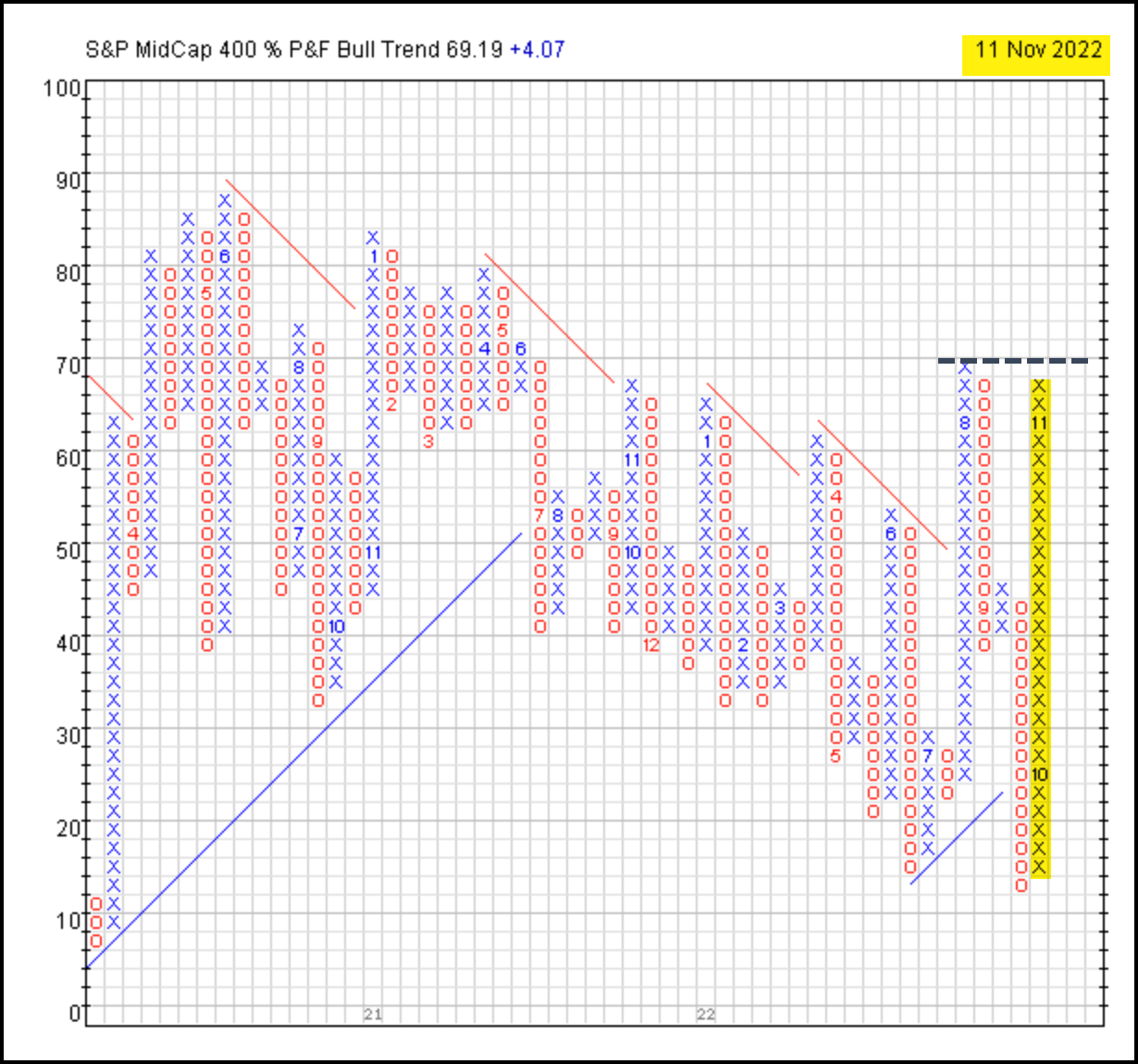 If the current X-column surpasses the black dotted line, this indicator will move to a Buy signal.

Here's how the recently-beaten up Nasdaq Composite is faring. The chart is already in a Buy signal and since June has been putting in higher lows. 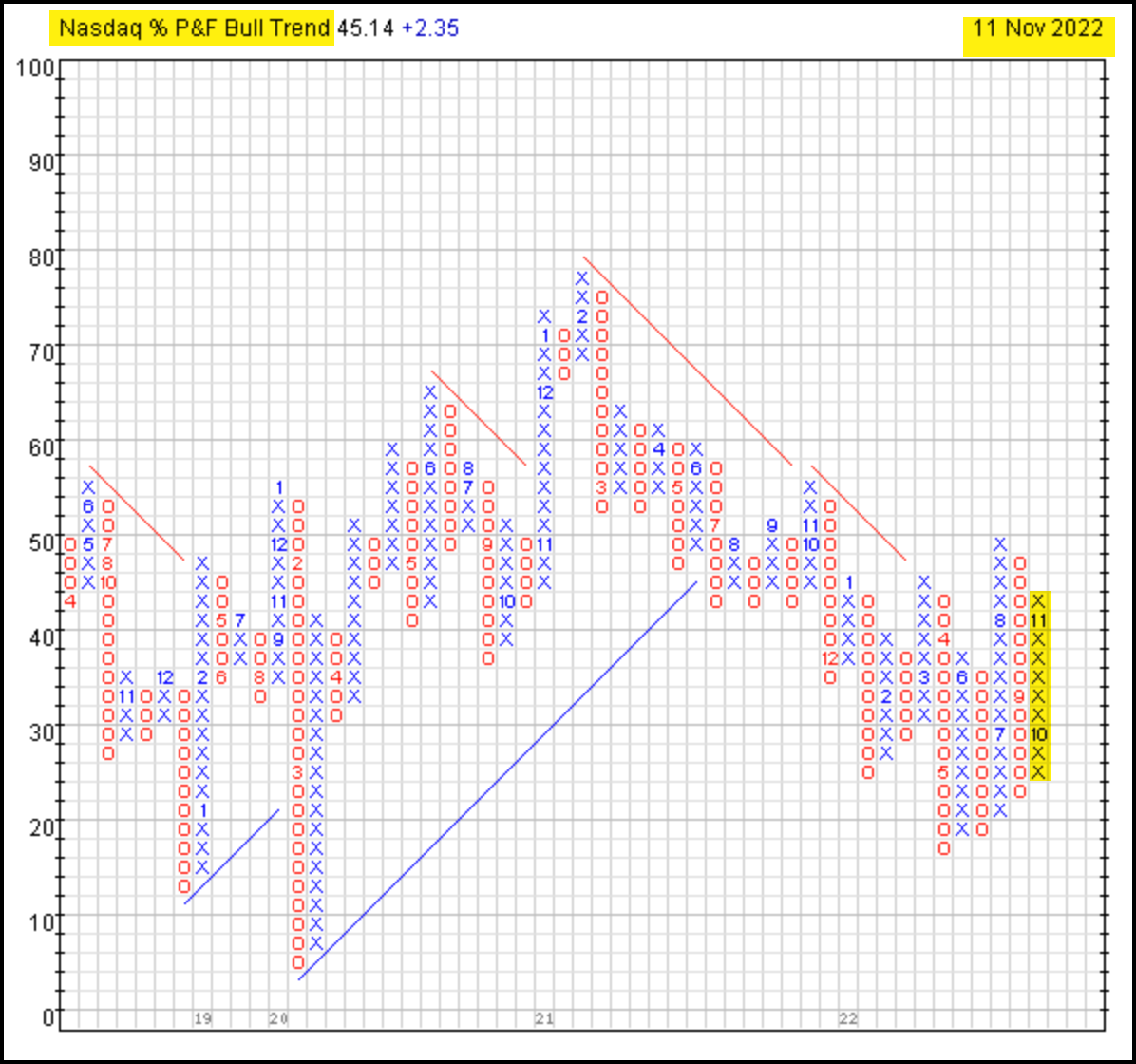 Small caps are killing it as well. Here's the Russell 2000. It's on a Buy signal. 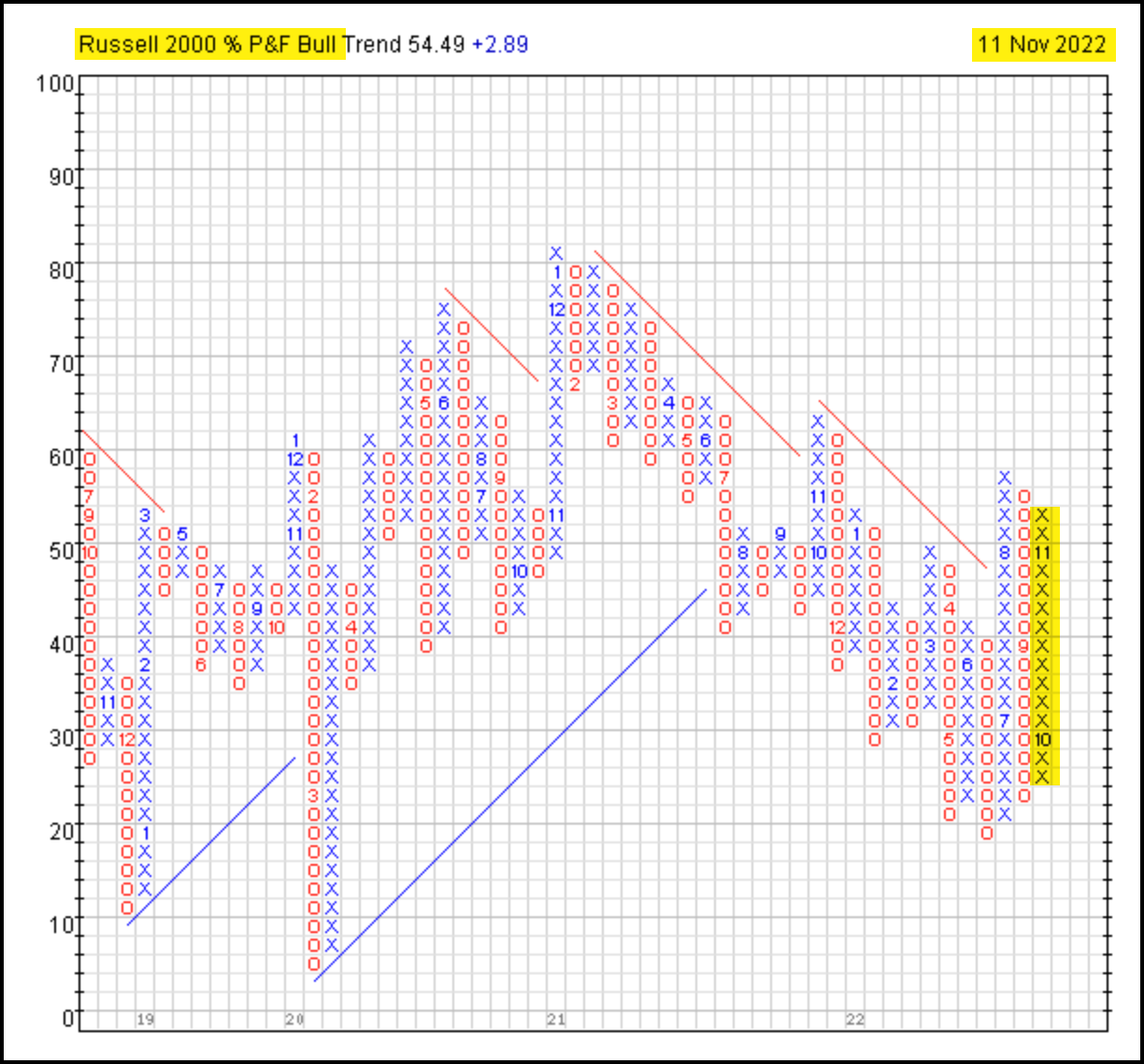 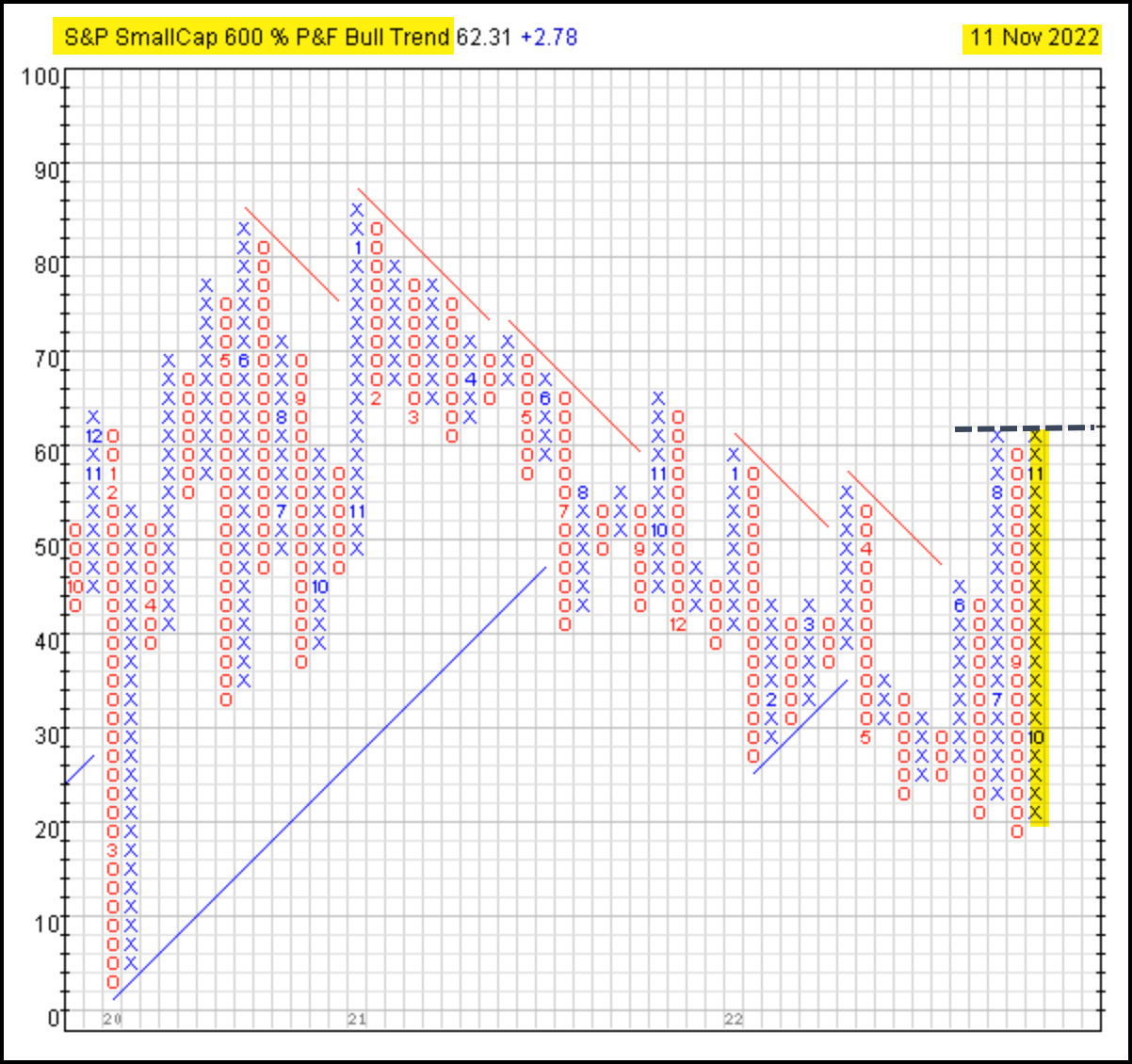 This chart needs to fill one more X-box before going on a Buy signal.

Here's another sign of strength. The US Industry Bell Curve, one of the premium tools that comes with Sector Prophets Pro, our sector research and data platform, shows that 43 of the 45 sectors we track are currently under the control of Demand (the bulls). 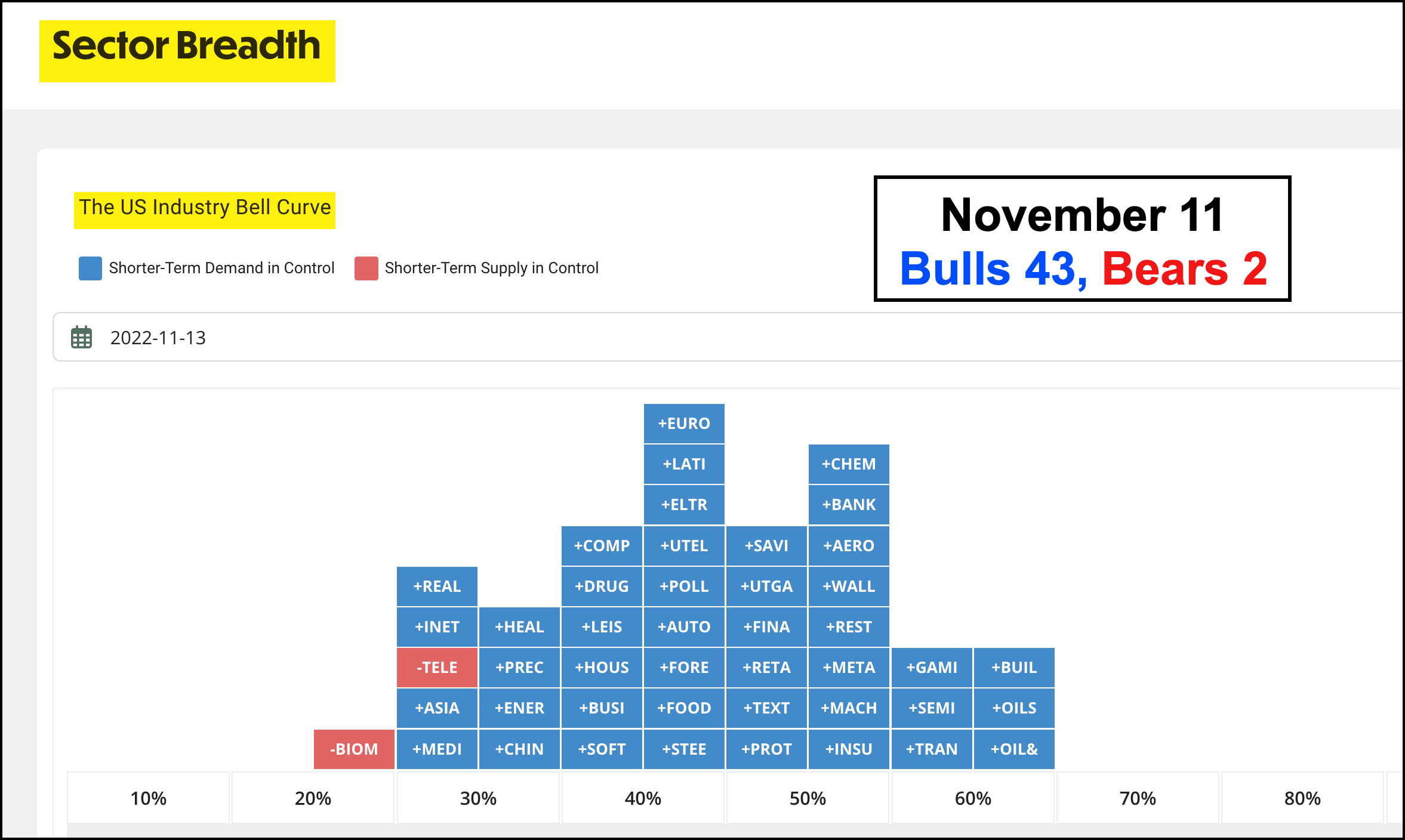 Also, the chart has moved notably to the right.This tells us that more and more sectors have moved away from the oversold region of their BPI charts and toward "midfield."

That in turn means that, more and more stocks within those migrating sectors are moving to point-and-figure Buy signals on their own respective price charts.

Clearly, institutions are accumulating stocks within a large number of groups. That's the definition of bullishness.

Now let's get back to Uranium Energy Corp. (UEC). Headquartered in Corpus Christi, TX, the company engages in exploration, pre-extraction, extraction, and processing of uranium (and titanium) in the United States, Canada, and Paraguay.

UEC’s fully operational uranium processing facility in South Texas, the Hobson Plant, is the largest and newest among all in the U.S.

Demand for electricity is growing by leaps and bounds. And as we've seen throughout the Russia-Ukraine conflict, supplies of oil and gas can be less than reliable.

The world is coming to terms with the reality that, if you want reliable clean electricity, and lots of it, the nuclear option (so to speak) is the only game in town.

When I first wrote about UES I said...

"Of all U.S.-based uranium producers, UEC holds the largest resource base of fully permitted, in situ recovery (ISR) uranium projects.

In situ recovery is where, rather than hauling the rock and ore out of the ground to extract the precious uranium... the resource is dissolved in place. Once it's in a liquid state, it can be pumped to the surface and the resource filtered out.

"This is considered the most environmentally friendly uranium recovery method."

Again, UEC is in the Metals Non Ferrous sector. Like the major averages we just looked at, this sector's BPI chart is in X's and on a point-and-figure Buy signal. So institutions are accumulating positions within this group. 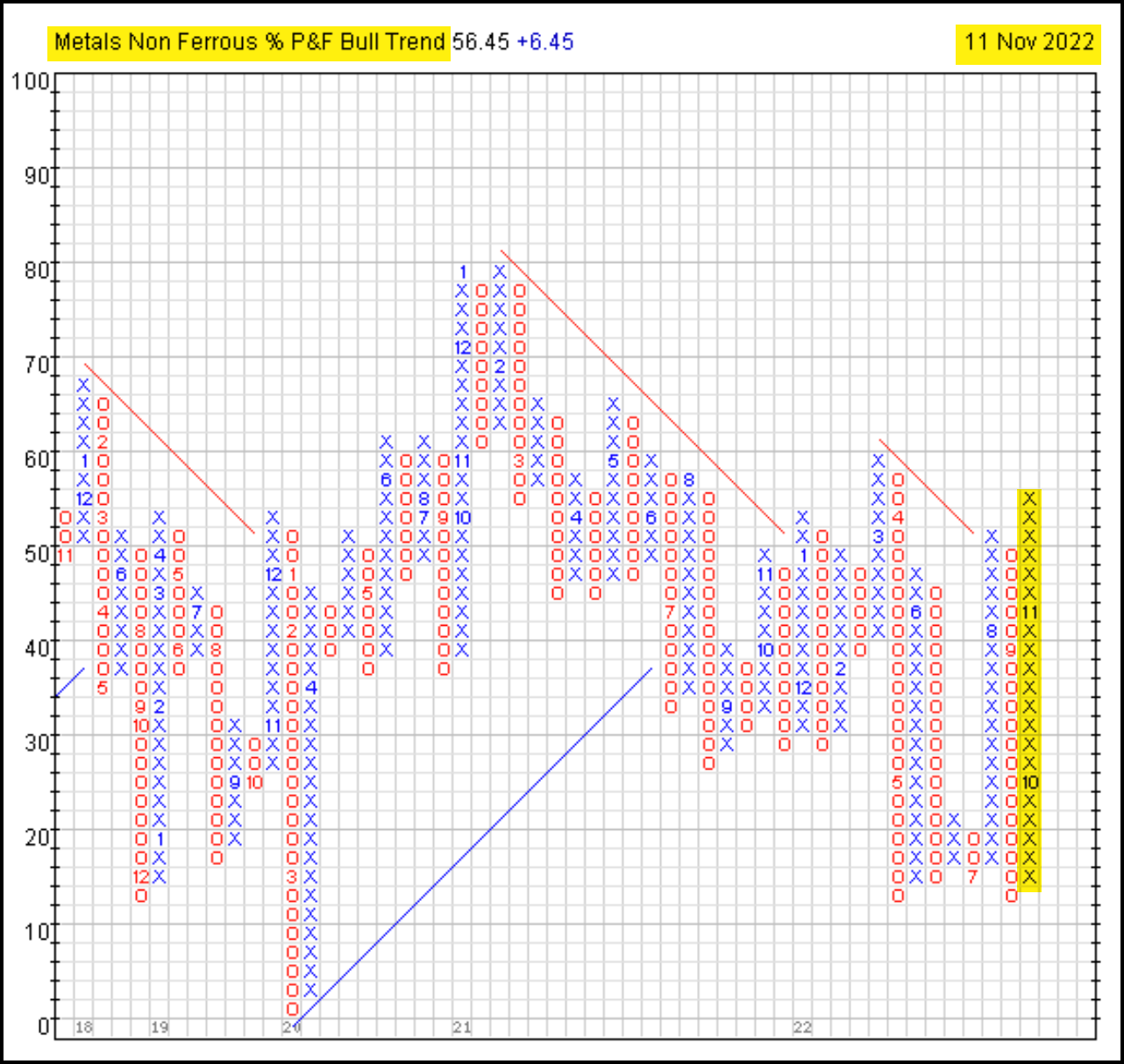 The sector is also showing short-term strength against the wider stock market (the Equally Weighted S&P 500). The Relative Strength (RS) chart below, is in a column of X's, and just needs to fill two additional boxes in order to break above the down-sloping red bearish resistance line and go on a Buy signal. 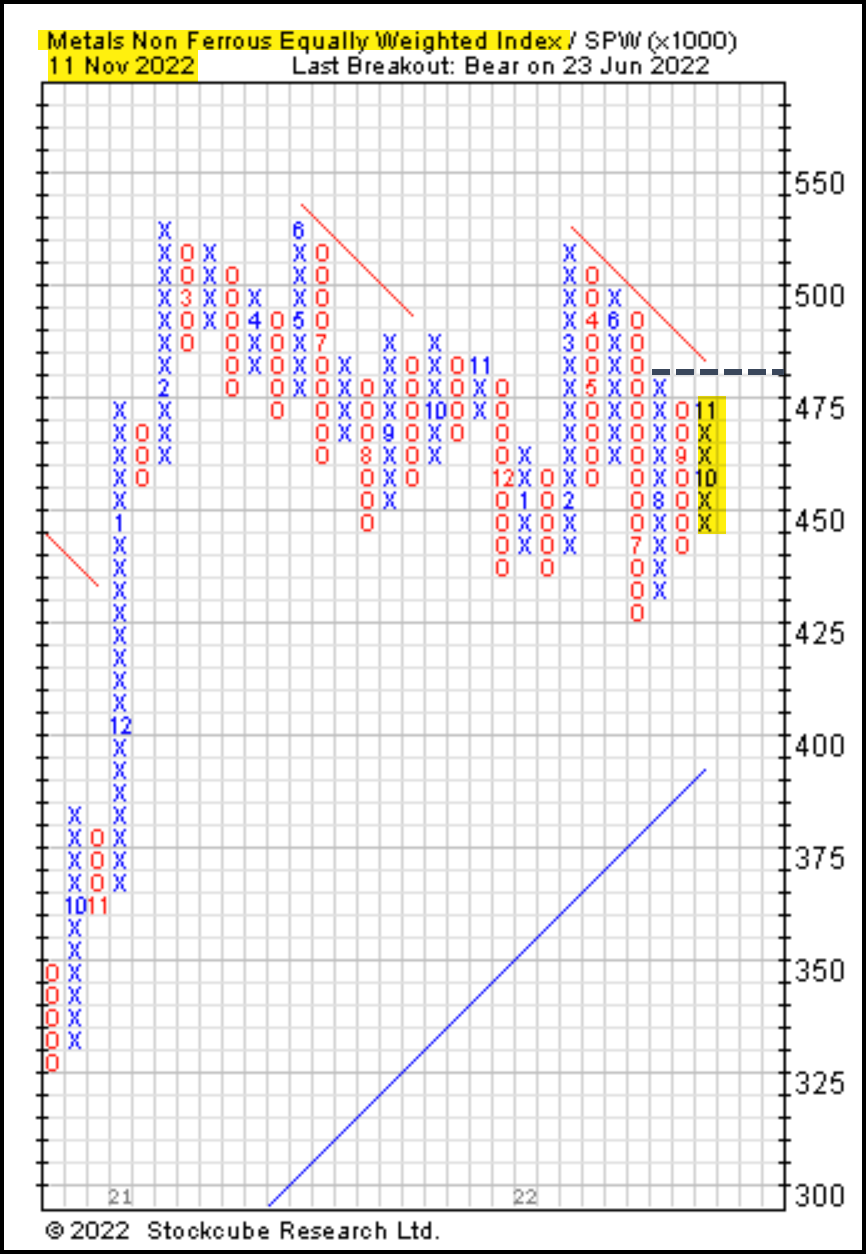 As for the stock, institutions have been accumulating shares. 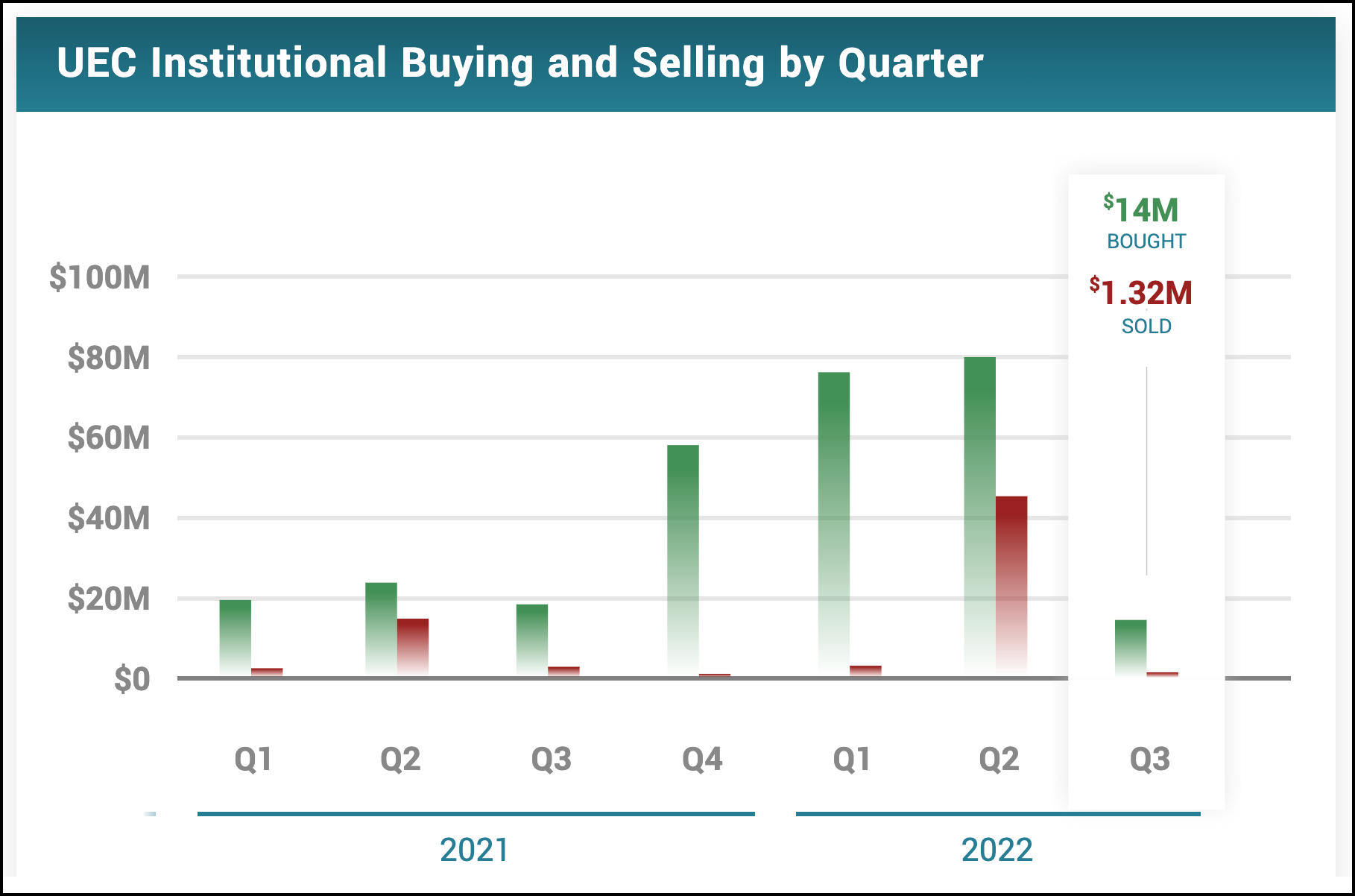 Over the past four quarters the big hedge funds have bought more than 4.5 times as much UEC as they've sold ($228 million versus $50.28 million).

The number of participating funds has grown, albeit modestly over the past four quarters -- +8.4% from 190 a year ago to 206 today.

(This image is brought to you courtesy of the fine minds at MarketSmith.) 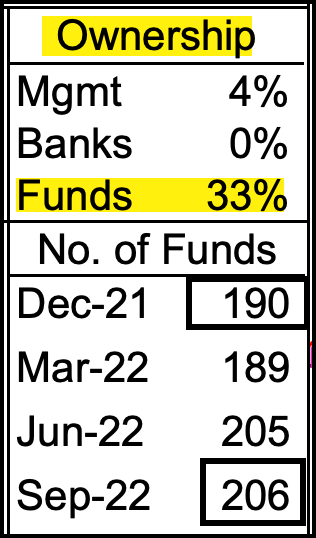 The company has met or exceeded earnings estimates for three of the past four quarters. (It is concerning that earnings expectations have been downgraded for the current quarter. That's something to keep in mind.) 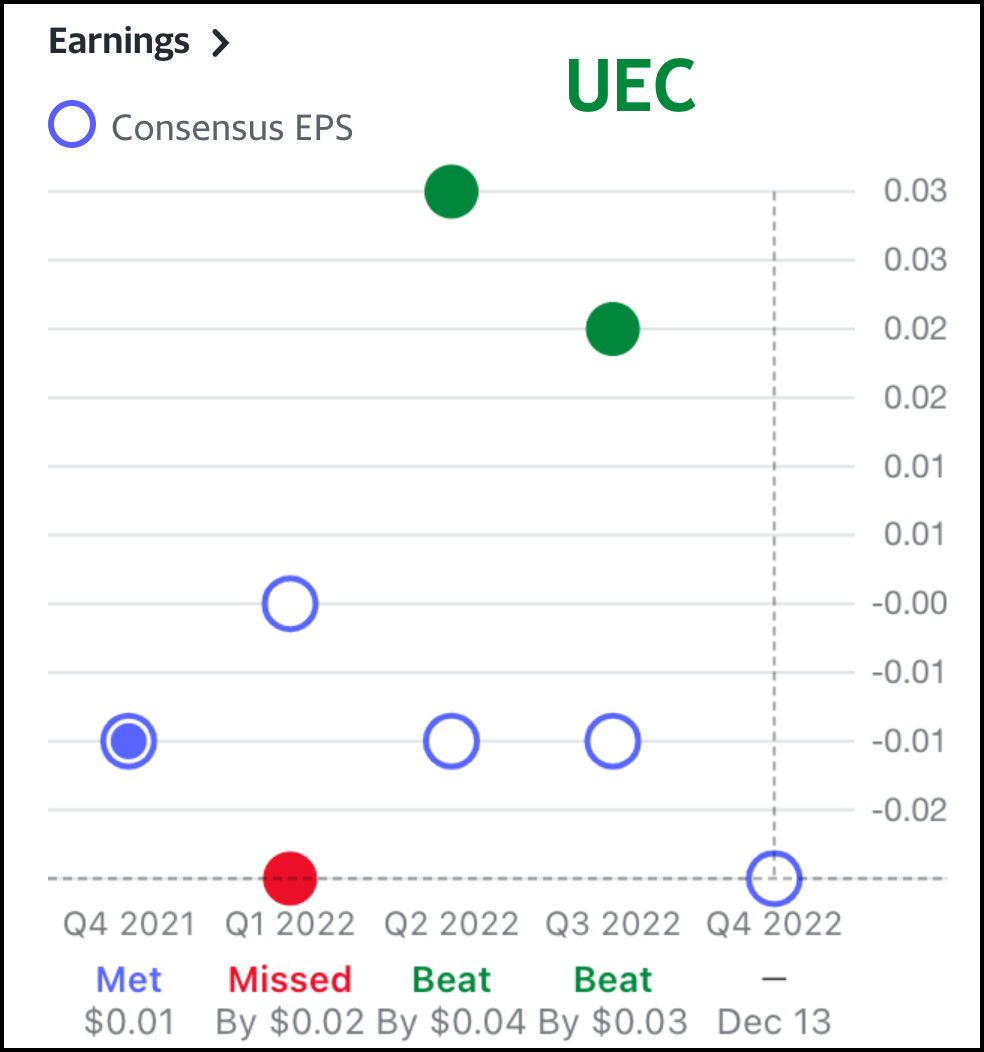 I've added Fibonacci rations to the one-year price chart, below.

Truthfully, I wouldn't look for a move to that level. A move to somewhere between the two levels is much more likely. So let's split the difference in our analysis.

Thank you as always for stopping by, and enjoy your week,