Hi there... Big Bill at your service.

Today I have something different for you. Something I think you're gonna like.

I'm no book reviewer. But I want you to know about a new, invaluable work by an ace business reporter named Christopher Leonard.

The book is The Lords of Easy Money: How the Federal Reserve Broke the American Economy.

The title is no exaggeration. In fact, it might more accurately be called "How the Federal Reserve broke the American economy not once, but five times since the 1970s." More on that in a moment. 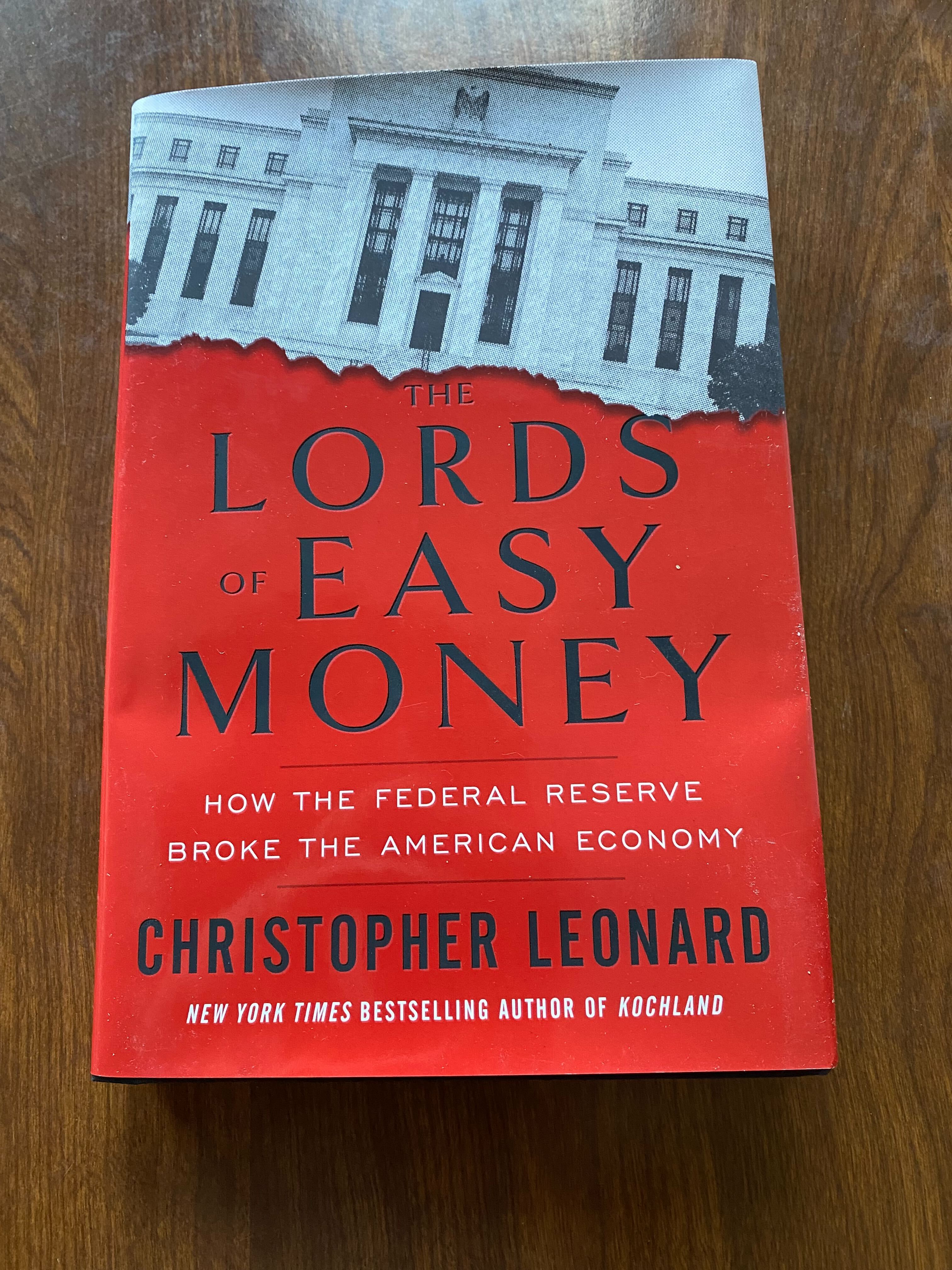 In this exciting, accessible and endlessly engaging work, Leonard shows us exactly how the Federal Reserve operates. We come to know how the Fed affects the markets, the economy, global finance and every American household.

More importantly, and alarmingly, we see how the Fed's role has changed dramatically since the Credit Crisis of 2008.

We see how the Fed, an institution that purports to be an impartial, apolitical, data-driven steward of the low-inflation, high-employment economy, instead picks winners and losers, and even causes the very calamities it's charged with preventing.

The Lords of Easy Money isn't the first book to attempt to explain the Fed's workings and ways. But it may be the only one that actually succeeds.

When you're done zipping through chapters with titles like "The Money Bomb," "The Risk Machine," and "The Overmighty Citizen" you'll know and understand more about money than anyone you know.

Leonard's explanations are simple and laid out in some of the most vivid, readable prose in all of financial reporting.

Writing about Ben Bernanke's 2013 suggestion that the Fed would slow down Quantitative Easing (QE), Leonard says...

Money travels back and forth, from end to end, on the seesaw depending on how bold investors feel. Since 2010, the Fed had been pushing money away from the safe end of the seesaw, where the 10-year Treasury bills sat.

This was the whole point of QE, to force investors to push their money over to the risky end of the seesaw because the Fed was keeping interest rates low on 10-year Treasury bills by purchasing so many of them."

What's also great about The Lords of Easy Money, given its potentially arcane, academic subject, is that it has a bona fide protagonist. We meet a central figure, and through his eyes we see the Fed as it deliberates and acts, and we feel the consequences of its actions.

His name is Thomas Hoenig, and he was President of the Federal Reserve Bank of Kansas City. He was also a member of the Federal Open Market Committee (FOMC), the body that sets Fed policy and then sets those policies into motion. 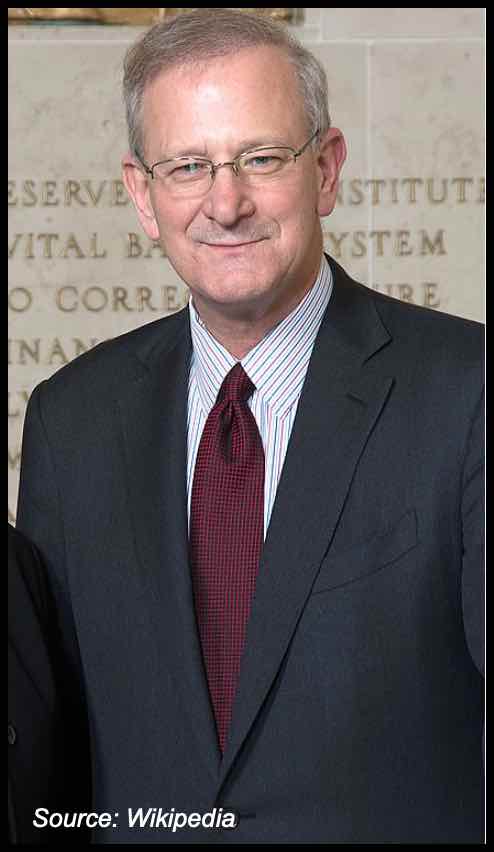 In 2010 Hoenig became famous (well, as famous as a Kansas City FOMC member can become) by defying then-Fed-Chairman Ben Bernanke and repeatedly voting 'No' on quantitative easing. In an institution that values unanimity and the united front, rebelliousness like Hoenig's is akin to treason.

Hoenig opposed QE because, as a member of the Kansas City Fed, he had seen what happens when the Fed kept interest rates too low for too long. The result was something called "asset inflation" which is not really acknowledged to be what, in fact, it is -- inflation.

The underlying dynamic here is as simple as it is devastating. When interest rates are too low for too long, capital, seeking yield, moves into assets, things like stocks or real estate, where it'll be treated better. The increased demand for those assets drives their prices higher.

We then see the familiar self-fulfilling spiral. Jones buys something and sells it for more than he paid. Smith sees Jones profit and wants in. That new demand drives prices even higher. Brown sees Smith make money, and now she wants in. Soon everyone and their Uber driver wants in.

The bust begins when rates begin to rise and capital flees those riskier assets into safer things like T-bonds, which now, thanks to higher rates, pay attractive yields. Anyone late to the party loses money. People panic and want out. The crash happens much, much faster than the rise.

It bears repeating that asset inflation comes about when interest rates -- the Fed's purview -- are too low for too long. And it's worth noting that this cycle might even be tolerable, but for a frightening feature of modern finance.

Asset inflation is an economic time-bomb because assets are used as collateral by investors to secure loans. When the price of an asset/piece of collateral is rising, borrowers can use it to support larger and larger loans. Leverage turns into over-leverage and risk runs amok.

A fourth crash happened in the 1970s in the Midwest, Tom Hoenig's home turf. The inflating assets at that time were farmland, oil wells, and commercial real estate. Banks overextended themselves. When the bust came, the banks went out of business.

And there's yet another wrinkle. Those risky loans, or portions of them, are frequently sold off to other banks or institutions who carry them as assets on their balance sheets.

You see where this is going. When the music stops, it's not just the banks that made the original loans that take a bath. In the modern banking system, more and more entities are infected. Hence, we now have as a permanent part of the financial landscape, the institution that's "too big to fail."

A trick, or quirk, of language keeps the danger of asset inflation out of mind and therefore out of sight. As Leonard puts it, "When asset inflation gets out of hand, people don't call it inflation. They call it a boom." (Italics mine.)

This is a tremendous insight -- that "booms" are thought good while "inflation" is thought bad, even though they're actually the same thing and pose the same threat. This insight could usher in a more sober, responsible monetary policy, were it fully felt and understood.

I've only scratched the surface of The Lords of Easy Money here. Leonard presents a tale peopled with colorful characters bearing colorful names, like the banker Beep Jennings ("who drank beer out of a cowboy boot to impress clients") and "The Three Amigos."

Throughout are clear explanations of actions and events people have heard about but comprehend dimly, if at all. Things like ZIRP, Fiscal Cliff, and Taper Tantrum.

And here's something that surprised me. I came away from Leonard's book with a new and deep respect and even admiration for Jerome Powell, Ben Bernanke, Janet Yellen, and pretty much all the Fed governors and FOMC members.

It's easy to caricature those individuals (I've done it myself) and to wave away the work they do as political theater or a financial dog-and-pony show, or worse. The Lords of Easy Money brings these individuals to life. We see them as super-smart, very passionate, and genuinely committed to their job -- keeping employment high and inflation low.

They all sit in very hot seats, and I don't envy them a bit. Instead I wish them godspeed in their work.

I won't spoil the ending to this story, because the ending hasn't happened yet. It's unfolding even as we speak.

We could be seeing the beginnings of a serious deflation in stocks. If we are, it'll be the fifth crash since the 1970s caused by the Fed and its relentless focus on price inflation rather than on (in Tom Hoenig's phrase) price inflation's cousin -- asset inflation.

We'll soon see how widely and deeply the current asset inflation has infected the global financial system, and what the fallout will be.

Thank you for reading, now go read The Lords of Easy Money.

And have an awesome week!