Hi there, and thanks for stopping by.

Today is August 1, 2022. And if you’re keeping score at home that means, counting down from this evening at 9PM ET, there are only three episodes left in Better Call Saul.

If you’re not keeping score, Better Call Saul (BCS) is the hit show on AMC. It’s the “prequel” to the famous Breaking Bad, which you’ve heard of and were perhaps at one time tired of hearing of.

I’ve been following Saul closely since its premier back on February 8, 2015. (Ok, I admit… I’m addicted to it.)

What got me hooked was one particular hook the show’s creators came up with. Jimmy McGill/Saul is a struggling young attorney of flexible-to-non-existent morality. He has a brother, Chuck, to whom he is devoted. And therein hangs the hook.

You see, Chuck McGill is afflicted with a condition that may or may not be real. He calls it “electromagnetic hypersensitivity,” or EHS. In plain English, the man is allergic to electricity. It’s a brilliant premise and the writers squeeze every drop of intrigue, pathos, terror and suspense from Chuck’s condition.

Because of EHS, Chuck is forced to live in pre-modern conditions within his spacious modern New Mexico home. No electric lights. No fridge. No cell phone, computer or batteries of any kind. No air conditioning or stereo.

When forced to venture out of doors, electricity in the air from nearby devices drives him out of his mind. 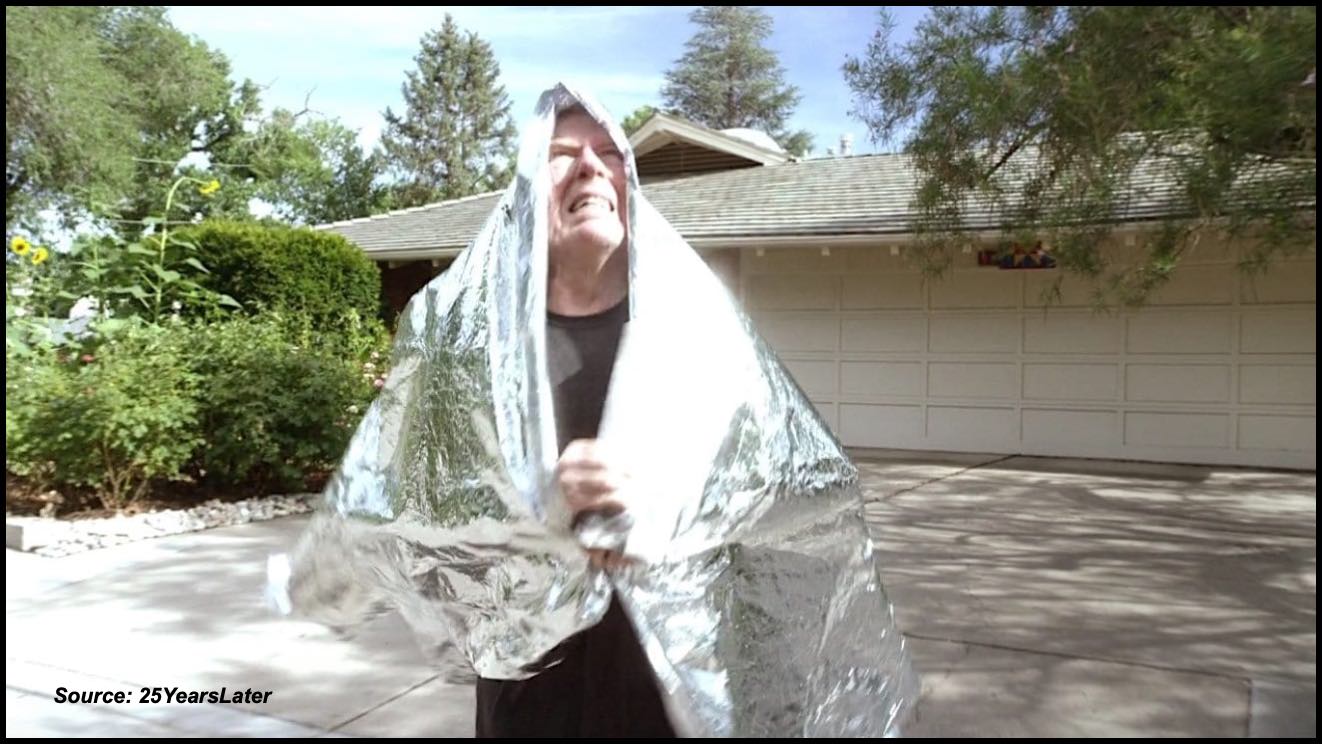 What makes Chuck’s condition/mental illness so compelling and terrifying is something all of us know but never think too much about -- electricity is everywhere. And the devices it powers are also everywhere, and they grow in number every day.

You literally cannot escape it. And that’s good news for us as investors. Because today’s mighty micro-cap is a great pick-and-shovel play on electricity.

The company is Richardson Electronics, Ltd. (RELL) out of LaFox, Illinois. The company provides, among a wide array of offerings, power and microwave technologies, customized displays, replacement parts, tubes, repair and training services for diagnostic imaging equipment and broadcast equipment.

With a $214 million market cap, this company lives within the #7-ranked Electronics sector.

It gained 37% during a period when the Electronics sector lost -14.86% and the broader technology sector as a whole lost -22.8%.

Plus, it pays a dividend yielding a respectable 1.54% annually.

As mentioned, Electronics is currently ranked #7 among the 45 sectors we track on our Sector Prophets Pro research and data platform.

The sector’s bullish percent index (BPI) chart is in a rising column of X’s and also on a point-and-figure Buy signal. This tells us the sector is strong over the short term as well as over the intermediate to longer term. 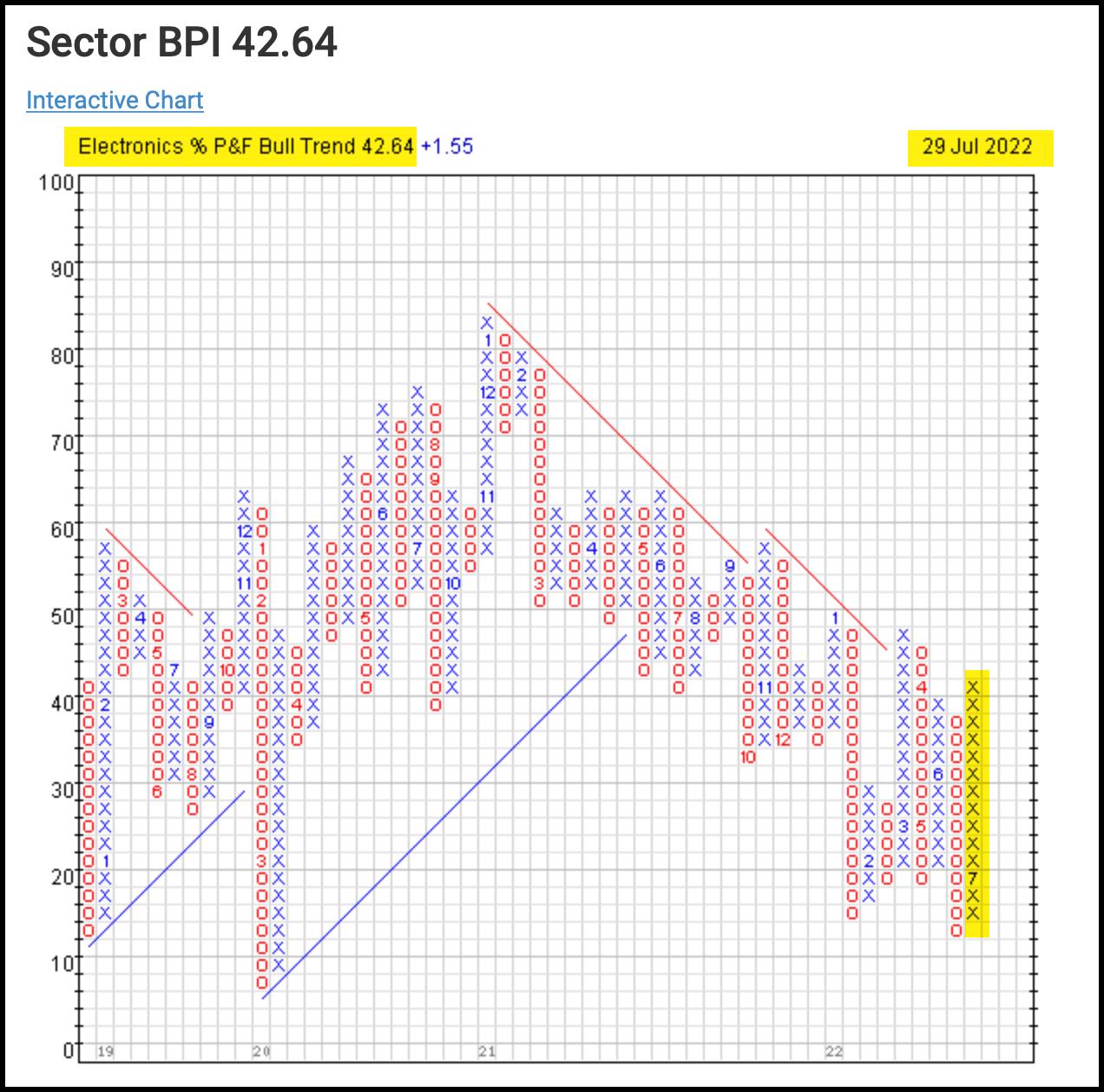 What’s more, the Electronics BPI has just emerged from oversold territory. So the sector has plenty of room to run higher, and pull the stocks within it (including RELL) higher along with it.

On a relative strength basis, Electronics is outperforming the stock market in the short term. The sector’s Relative Strength (RS) chart is currently in a column of X’s, but on a Sell signal. 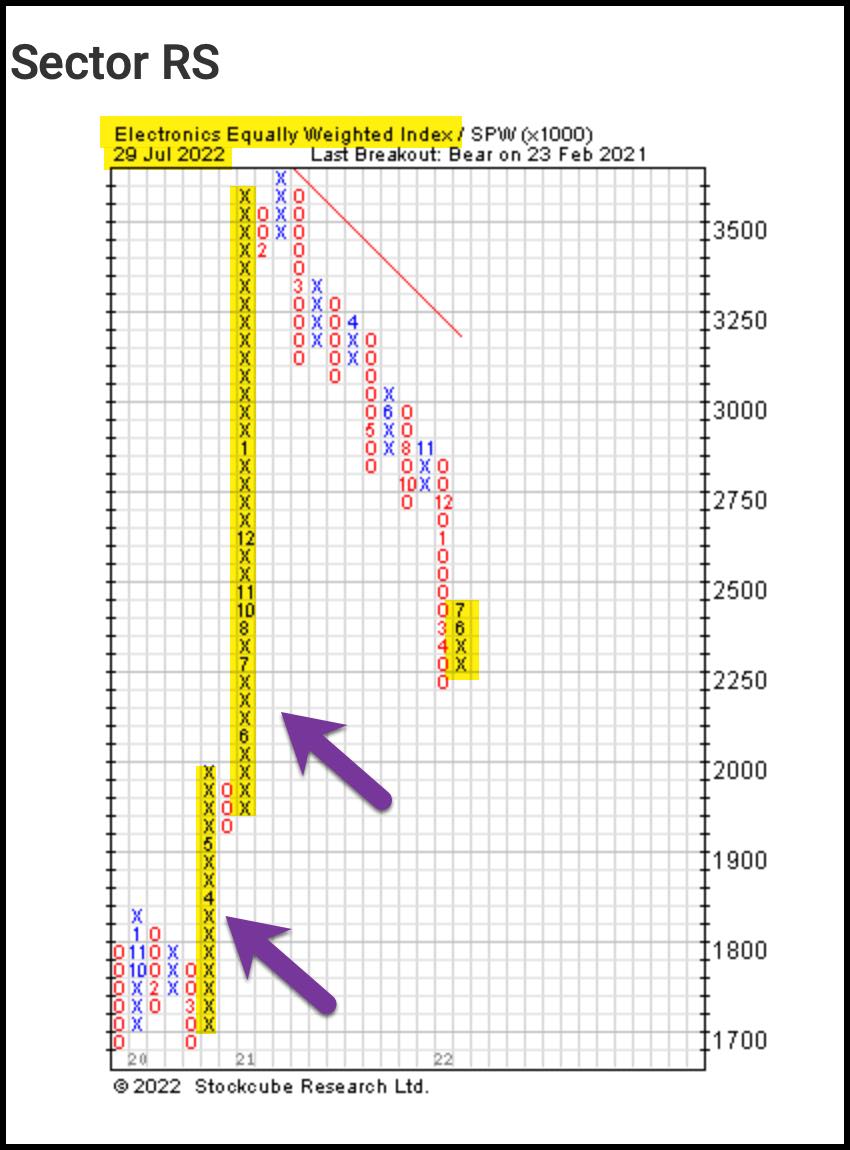 That tall highlighted X-columns on the left shows where the Electronics sector (and technology in general) crushed the market from April 2020 through February 2021. We’ll come back to that later.

First, let’s come back to the Sector Prophets Pro platform. Here’s Richardson Electronics (RELL) on our Position Key. This tool allows us, at a glance, to see the disposition of a sector and a stock within that sector.

The first two blue arrows show the status of the sector. In this case Electronics is on Bull Confirmed status (the strongest designation) and is strong against the market.

The red arrow shows that, right now, RELL is underperforming its sector peers.The blue arrow at the right shows us that the stock itself is outperforming the market.

You can see in the image below how RELL has been growing its revenue (Sales) and, especially, growing its earnings per share (EPS).

Over the past year, sales have grown on average +27.25% per quarter. EPS has grown an amazing 492% per quarter.

RELL is under accumulation right now and has been for three quarters. 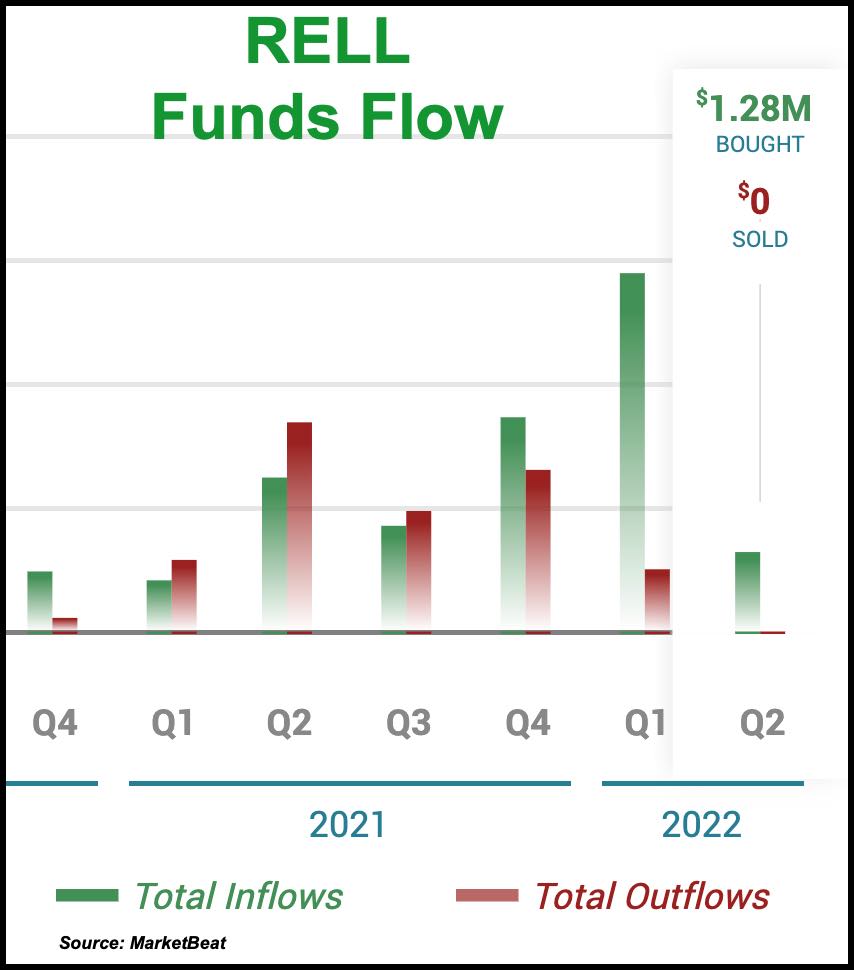 Since the fourth quarter of 2021, the giant hedge funds have accumulated (bought) $10.52 million worth of RELL, while distributing (selling) $3.61 million. That means the funds are buying 2.91x more RELL than they’re selling.

Also, we’re seeing an increase in the number of funds participating. 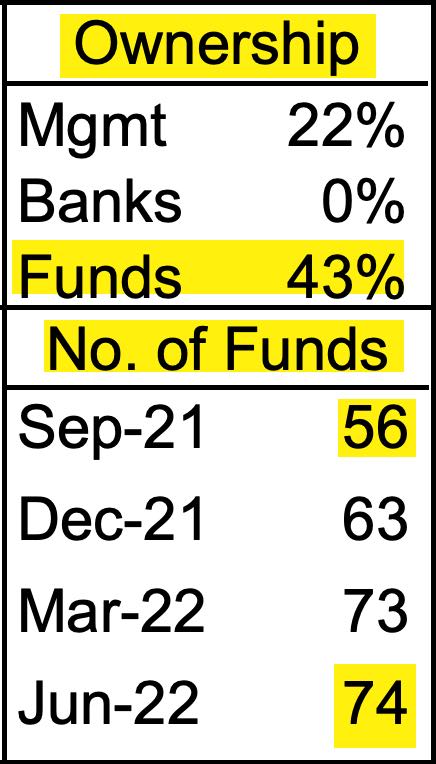 Over the past four quarters the number of funds taking positions in RELL has grown from 56 to 74 – a 32% increase.

The highlighted region shows where a cup-and-handle pattern has formed. This formation often (not always) foretells a breakout higher.

Notice from the blue dotted line how the upper lip of the cup (the gray ‘high’ bubble) is higher than the lower lip at the left. That’s what we want to see.

Also, notice how the handle moves lower gradually, rather than gapping or wedging down. Also what we want to see.

Earlier, we saw how the Electronics sector crushed the wider market until February of 2021. Since then the entire tech space has undergone a major selloff from which it has only begun to recover.

Over that same period Richardson Electronics has gained 37%.

Here you can see the performance of RELL versus on a performance chart (or “perf” chart) since February 2021, when Tech began to soften. The red line is RELL.

We just saw that over that same period RELL is up 37%.

Here’s a perf chart comparing RELL with QQQ. Again, we’re looking back to February 2021. And again, the red line is RELL.

The stock market is in the midst of a bear market rally. But the bear market is most likely not over. We’ll see prices fall again. If that happens, RELL could fall with it. And being a micro-cap, it could fall more than the market.

The stock is likely to find support near its 200-day moving average, or around $12.75. That’d be an excellent buy point. From there, if RELL retraces back to its recent high of $17.21 (the 100% Fibo level highlighted in yellow in the image above), we’ll see a return of 35%.

Thank you as always for reading, and I’ll see you next week.