Micro-Cap Monday - When Will This Market “Go Into the Light?”

Hi there. Thanks for stopping by.

This past Friday, Spencer Jakab of The Wall Street Journal offered one of those penetrating statistics that makes market junkies like me want to spring from my chair and salute. Or at least renew my subscription.

“In May, Google searches for “capitulation” hit their highest since October 2008, the month following the collapse of investment bank Lehman Brothers. The S&P 500 had by then lost a gut-wrenching 38% from its peak a year prior and it seemed like things couldn’t get much worse.”

So this past May, people were crashing Google’s servers searching for information pertaining to surrender. (If you’re new to the word, my aged roommate Noah Webster says that capitulation is “the action of surrendering or ceasing to resist an opponent or demand.”)

What was on their minds? The underdogs in Ukraine? The New York Mets? Most likely that army of cyber seekers simply wanted to answer the question everyone is asking. How close is the market to a bottom?

In investing, capitulation refers to that time when the dead-enders finally throw in the towel and stop deluding themselves that a bear market is merely a short-term dip. Their desperation selling drives the last nail into the coffin and sends the market to a long-term bottom.

If people were asking about market bottoms back in May, who could blame them? The Dow Jones Industrials made an infamous “death cross” on April 25, when its 50-day moving average crossed below its 200-day MA.

The death cross is a textbook bearish signal, whether it appears on the chart of a stock, a sector or the market as a whole.

The S&P 500 followed with a skull-and-crossbones of its own four days later, on April 29.

(The tech-heavy Nasdaq Composite rolled over much earlier, on February 22.)

Sell In May and Don’t Go Away

All three major averages put in their most recent highs on May 4. As mentioned, all three then headed lower. So again, you can get why investors were asking about capitulation.

Clearly, not everyone who sold in May went away. The rally we’ve seen since June appears convincing. For one thing, despite having a down day on Friday, the S&P managed to close above its 50-day MA for the third trading day in a row.

So did the Dow…

So did our small-cap proxy, IWM…

(The beaten down Nasdaq still dwells below its 50-day MA.)

Those recent closes in the Dow, the S&P and IWM are hardly the blast of a technical trumpet, I know. It won’t take much to send all three below that level.

The Fed is expected to announce a rate hike at its next meeting, this coming Wednesday. Odds favor a 75 basis points (0.75%) increase. But there’s about a 45% chance the Fed will go big and declare a 100 basis points hike.

That would be bad news for equities, as the Fed hasn’t raised rates by that much since 1982, during the hawkish Paul Volker era. It could send the market back to those June lows.

Pump Up the Volume… NOT

What’s more, during this latest short-term rally, volume was noticeably below average. Again, that’s not what we want to see.

Here’s a 3-month view of SPY (our proxy fund for the S&P). The volume for the most recent rally is highlighted in yellow.

The red arrow shows the last time SPY traded with above-average volume. Notice how on that day the chart shows an indecision candlestick, called a “spinning top” doji. And notice also how the price gapped lower.

The SPY did move higher in subsequent trading days, but it did so on lighter volume and it ultimately failed to put in a new short-term high. It then dipped lower on higher volume (but not much higher).

This has been and remains the most confounding market I’ve ever lived through. Confusion and indecision abound. I’m a glass-half-full kind of guy, so I’m going to leave you on an upbeat note.

Is the Market Headed “Into the Light?”

As Chris Rowe was saying just days ago, if this market can sustain a break out, it’s likely headed much higher. And we are not without bullish signs.

For one, Our US Industry Bell Curve (from our premier data platform, Sector Prophets Pro) shows that 39 out of 45 sectors are currently under the control of the bulls. You can see them colored blue in the image below. 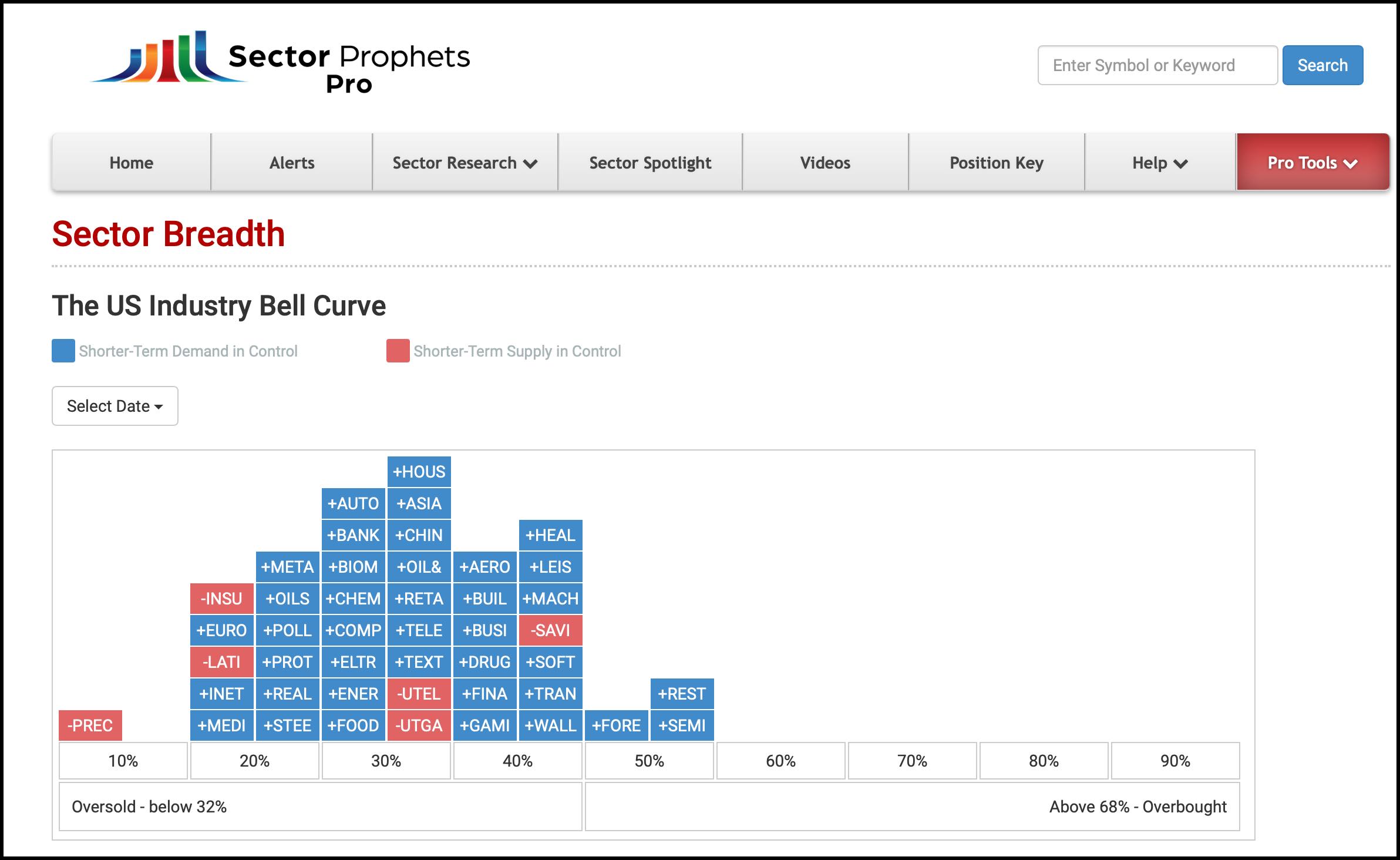 Market breadth hasn’t looked this strong since June 9, when 40 sectors were in the hands of the bulls.

Right now all six are in X’s on their respective bullish percent index (BPI) charts. That means that the bulls control all six over the short term. This is not a small development.

The lone BPI holdout over the past few weeks had been the New York Stock Exchange BPI, which we affectionately refer to as the “granddaddy of all indicators.” The NYSE BPI flipped into X’s last Tuesday, July 19. (You can read an analysis of this move here.) 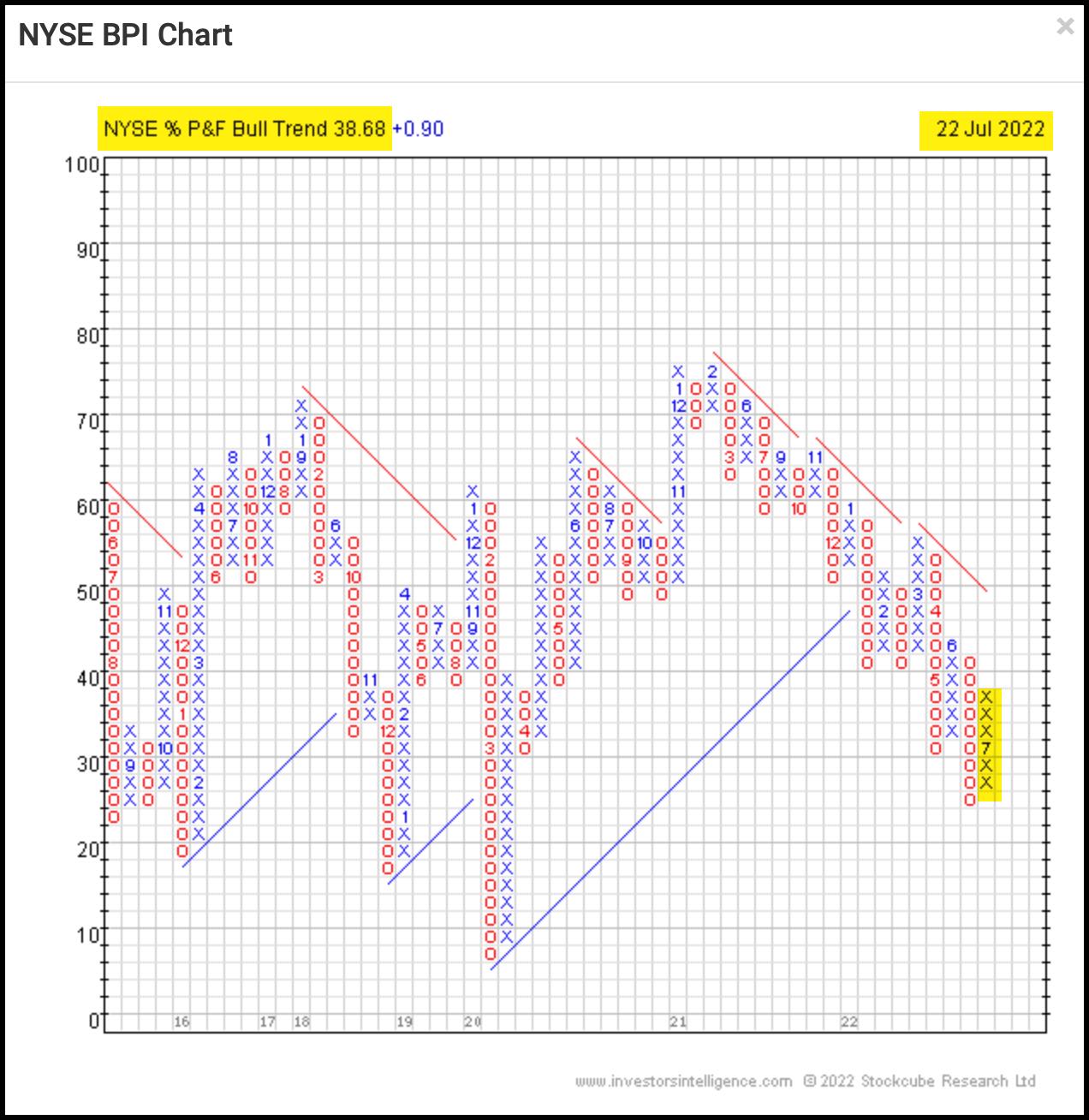 Some Zen masters teach that wisdom enters through the gate of confusion. If that’s true, we’re all going to be very wise once this market picture clears up. Not to mention very rich if we play our cards right one a long-term bottom arrives at long last.

So if you’re confused, know you’re not alone. And you won’t be confused for very long.

Thanks again for your time and attention.

Stay ahead of the heat.