Dollar Strength Spells Doom for This Stock — Here's How to Profit

You’d think news of a strong U.S. Dollar would lift investors’ spirits and give

Americans reason to jump for joy.

That certainly should be true if you buy imported goods in the U.S. or if you’ve traveled abroad, stayed in luxury hotels, ate international cuisine or purchased  souvenirs to bring back to the folks at home.

Folks who do any of that are getting the biggest bang for their buck in about 20 years.

However, many companies that rely on a large percentage of revenues from overseas sales are bracing for a painful period now that dollar strength is making their products more expensive for holders of other currencies to purchase.

The big fear is that  some exports will no longer be competitive on the international market.

We saw a similar strengthening in the dollar in 2015. Janet Yellen was the Federal Reserve Chair that year.

During that time, the U.S. Dollar Index (DXY) rose by 14.2%. (DXY is widely used to gauge the greenback's performance against the euro, the Japanese yen, the British pound, the Canadian dollar, the Swedish krona, and the Swiss franc.)

In the first three months of 2015, companies in North America lost nearly $29 billion because of currency swings, according to FiREapps, a company that advises businesses on managing their currency exposure.

Today, Nearly half (44.4%) of sales from S&P 500 companies come from overseas, according to S&P Dow Jones Indices. And many industries that America leads in, such as technology, energy and heavy equipment, get roughly half or more of their total sales beyond our borders.

After weakening during the first year of the pandemic, the dollar strengthened  in 2021 and gained even more steam after Russia invaded Ukraine in February. In just three short months, the dollar appreciated by 7%, 5.6% and 10.8% against the British pound, the euro, and the Japanese yen, respectively. 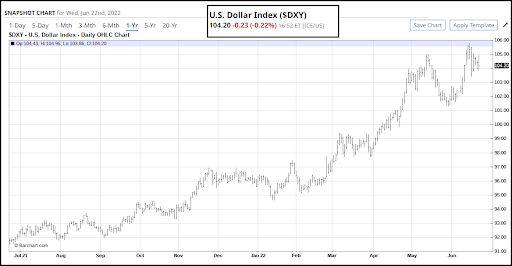 The Turbo Boost Behind the Dollar

The dollar is being boosted by several factors. The world is grappling with supply chain shortages (a hangover from pandemic lockdowns) and a resulting slowdown in economic recovery.

Global inflation has been the result of these supply shortages, and Russia's war on Ukraine is adding fuel to the fire. In an effort to try to tame rising prices, the U.S. Federal Reserve is raising interest rates and tightening monetary policy.

With interest rates on U.S.-based debt going up and the global supply of dollars perhaps getting scarcer thanks to the Fed, foreign investors are flocking to the “safe” dollar and driving its value higher.

For technology companies, when a software or server sale (or any type of sale, for that matter) is made outside of the U.S, that money needs to be converted back into dollars for the sake of financial reporting.

If the U.S. dollar gains in value against that given foreign currency, the value of the reported sale is less at the time of reporting.

During an earnings call in April, Apple (AAPL) said it expects a nearly “300 basis points headwind, or about a 3% hit to revenues (with respect to foreign exchange).” Remember, while Apple holds more than 35% of the global mobile market, that makes it very vulnerable to foreign currency movements.

Salesforce (CRM) made a similar downward revision. It had already called out foreign currency exchange rates as having a $300 million impact on expected revenue this year, but during the first-quarter earnings update, management increased that to about $600 million for the full year.

Drug companies that sell medicine and medical products in international markets have also taken a hit.

In late April, pharmaceutical company AbbVie Inc. (ABBV) said foreign-exchange effects reduced sales by 1.3% in the first quarter of this year—and that was before the dollar hit recent highs in May. For the full year, AbbVie forecast that the rising dollar would hurt sales by 1.4%.

Pfizer (PFE) said its anticipated negative impact from exchange rate changes had increased to $2 billion from $1.1 billion guided in February, but the COVID vaccine maker held its 2022 revenue projection at $98 billion to $102 billion.

Those are the headwinds many multinational companies are facing today. As you can tell, a strong U.S. dollar can be the earnings enemy for many industry stalwarts.

Betting on Nike to Drop at Least One Shoe

That’s especially true for Nike (NIKE) with 60% of sales coming outside North America. 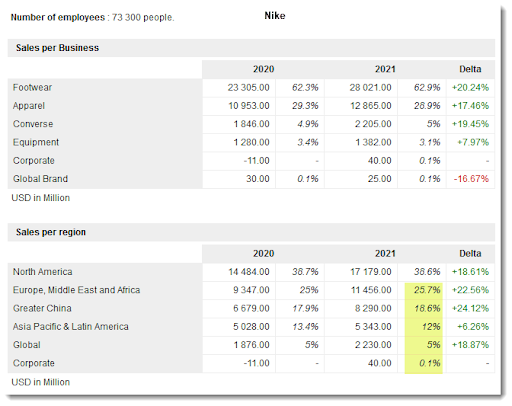 Analysts already warned investors to brace themselves for less-than-stellar results next week when Nike reports earnings for the fourth quarter on June 27.

Like other global retail brands, the athletic-wear giant has faced many challenges in recent quarters, including factory and store shutdowns in China and Vietnam, supply chain slowdowns, port congestion in the U.S., and foreign exchange issues tied to the dollar.

The company expects those factors to negatively impact sales and margins in the fourth quarter and throughout all of 2023.

Those are some fundamental factors that lead me toward recommending you buy Put options on Nike.

Technically speaking, shares have been on a downtrend since late 2021, and recently fell through a support level at its 200-day moving average. 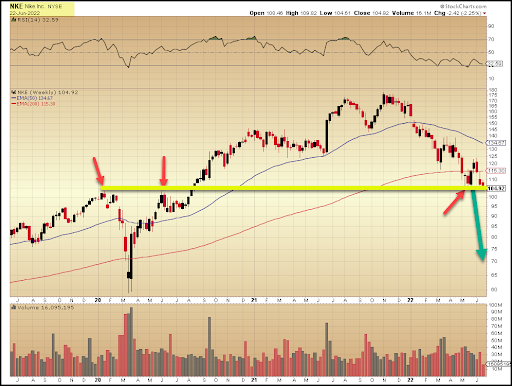 If it continues its downward trend, shares could drop to their March 2020 lows and make this trade very lucrative for those making bearish bets on NIKE.

This means you can control a 100-share short position for about $2,150, much lower than $10,500 it would cost to short the stock at its current price of $105 (and do so without a margin account). And you’re reducing risk at the same time.

Now that sounds like a good plan for investing in the downside of a strong dollar–and against a company caught in its headwinds.

Got Options? You Should!