Got Cash to Put to Work? Here’s How to CRUSH Inflation with this One Trade

Despite a painful, six-month-long market selloff, investors are still walking—not

running—for the exits and unloading equities.

Although the most recent bout of selling tells me that some have at least picked up the pace, the lack of panic and perceptions of doom suggests we’re nowhere near a bottom.

The more investors choose to make mountains out of molehills, confusing a short-lived bear market rally for a long-term bullish trend reversal, the longer this dreadful washing-out process will take.

For a technical explanation, I’ll refer to the VIX, also known as the market’s "fear gauge.” As a floor trader on the Philly options exchange back in the late 1990’s, the VIX was one of the most important symbols on my quote screens. I got to know it inside and out.

The blow up of hedge fund Long Term Capital Management sent the VIX shooting to historic highs - many firms were wiped away from the huge spike in volatility.

And I traded right through the entire ordeal, so I’m intimately familiar with volatility.

The VIX is basically a volatility index that shows the market’s expectation of 30-day volatility. It does this by using the implied volatilities of a wide range of S&P 500 index options.

So many eyeballs stay focused on the VIX because of the special status the S&P 500 enjoys in the investing world. It's the benchmark of all stock market indices with a market capitalization that now exceeds a staggering $36.7 trillion.

Here's the thinking behind this indicator...

Let the VIX Do the Talking

When investors are less fearful and become complacent, option prices tend to decline because there’s less demand for the kind of insurance that options provide. When this happens, implied volatility decreases, which in turn drives down the reading on the VIX.

Some uneasiness did creep into the equation after the recent selloff, as illustrated by options trading in the SPDR S&P 500 ETF (SPY). Bearish Put contracts outpaced bullish Calls by a ratio of 1.78-to-1. That’s the highest ratio in almost three months.

The recent VIX reading of 33 is higher than the historical mean-average of 16, the average since the VIX was created in 1993. However, it doesn’t come close to the 50% and 60% levels reached at what we now know were market bottoms during the Financial Crisis in 2008-2009 and the pandemic selloff in March-April 2020. 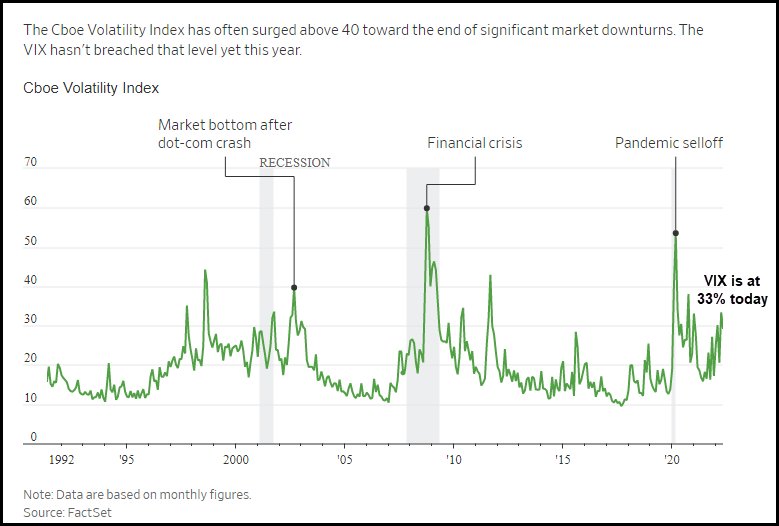 The VIX has often surged above 40 toward the end of significant market downturns, but it has yet to breach that level this year.

While it’s not necessary for the VIX to shoot higher before the markets calm, failure to climb above the 40 mark may be a sign that selling in stocks is not yet washed out, making it more dangerous for those looking to buy the dips.

You can chalk up the lack of urgency to wishful thinking, bad advice, naivety, denial, greed, distrust, and any number of other reasons.

While I hope the issues roiling the markets will miraculously disappear, I’m a realist, not a glutton for punishment. Plus, I have your best interests at heart.

The Federal Reserve just raised rates aggressively, another 75 basis points (the biggest single hike in 28 years) to try to curb inflation even though they face sending the economy into recession.

Oil prices are still on the rise and expected to continue doing so. Consumer spending is down.

Russia and Vladimir Putin aren’t pulling back, and Ukrainian forces aren’t giving up.

And we’re still suffering supply chain hangovers from COVID and other pandemic-related economic and social disruptions.

Other than those challenges, the next several months should be smooth sailing—as smooth as any Perfect Storm can be, that is.

Now, if you’re looking for ways to navigate the choppy markets and have raised capital to put to work, selling Put options is one of the best strategies for reducing risk and lowering cost, increasing the potential for higher returns, and allowing for a good night’s sleep.

When looking for candidates, you still want to focus on fundamentally sound companies. Apple (AAPL) is a great example. Since the company announced record-setting quarterly sales and earnings in April, shares have zig-zagged.

Investors rewarded the $2.1 trillion company on the news, pushing the stock as much as 6% higher intraday. It eventually closed at $166. However, market jitters leading up to the Fed’s interest rate hikes in May brought shares down to the $150 level. As of Tuesday, shares were trading around $132.

Is this sole member of the FAANG group (Facebook, now Meta; Apple, Alphabet, Netflix, and Google) that’s still outperforming the S&P 500 a great stock to own? I think so.

That makes it the perfect candidate for the technique I want to show you today, which involves selling out-of-the-money Put options on stocks that you want to own but don't own yet.

How to BUY Apple for a Discount... or Get Paid Trying

Let’s say you’re interested in buying 100 shares of AAPL but would prefer to buy them at a lower price. 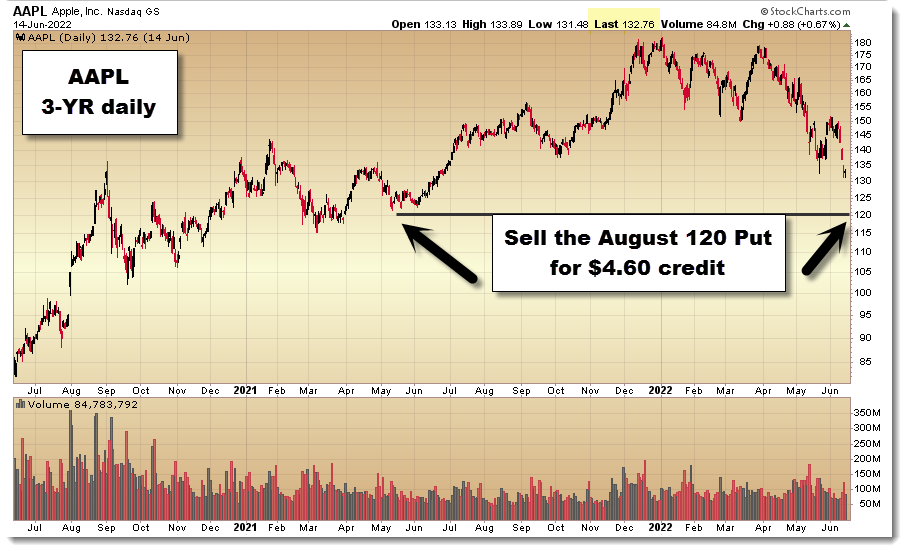 For every 100 shares of AAPL you'd like to own, you’ll sell one Put option contract. (Since we're interested in a 100-share position, we don’t want to sell more than one contract.)

You’ll also want to target a relatively nearby expiration date, typically less than 90 days away. In this case, you could look to sell ONE August 120 strike Put option for $4.60.

By selling one Put option contract, you get to immediately collect $460 in premium. That cash is yours to keep. It’s immediately credited to your account and the funds are usually available the following day.

In exchange for receiving that upfront cash, you’d be obligated to buy AAPL at $120 per share between now and the August expiration.

We’re obligated to buy AAPL at $120. Yesterday afternoon, the stock was trading around $132—or about 10% higher.

Well, we should be okay with that scenario, because our original intention was to gain bullish exposure in the stock.

Our cost basis would actually be further reduced by the $460 in cash we pocketed. So, factoring in the cash payment, you’d be buying into the position for $115.40 per share, and not at the recent market price of $132.

That would represent a price discounted about 13% from where it’s recently traded.

Now, what if the stock doesn’t fall below $120 at expiration?

In that scenario, we won’t get to own AAPL at a discount, but we have $460 in cash to show for our foresight and savvy.

That equates to an annualized return of +21.3%!, far exceeding the rate of inflation that’s, by the way, hitting 41-year highs.

Got options? You should!

See you next time,