A Timely Reminder About the Wild World of Whipsaws

Please tell me you didn’t fall for it.

You saw the markets soar on Wednesday after the Fed boosted rates more than it has in 22 years—0.50 basis points. And, like magic, give or take a tenth of a percentage here and there, the S&P 500, Dow Jones Industrials, and the Nasdaq all rose 3%.

It was as though investors took a collective sigh of relief that indeed the Big Bad Bear finally went back into hibernation, and all was right with the world once again.

You believed the positive spin CNBC put on the market, you felt the FOMO sweep through your veins, and you did it all with zero hesitation.

First, you bought the rhetoric, then you bought a bunch of downtrodden stocks and patted yourself on the back for your impeccable timing.

Now, you’re kicking yourself in the you-know-what.

On Thursday, the market made one of the widest 180-degree turns I’ve ever seen and lost even more than it gained the previous day.

I mean, it was UGGGG-ly.

And that soreness you feel in your neck? You didn’t sleep funny, you just got whipsawed along with lots of other investors.

If “whipsaw” wasn’t in your investing vocabulary before, it should be now. It’s when the price of a security you’ve just bought abruptly swings in the opposite and unexpected direction.

Let’s focus on the word “unexpected.”

Should we have expected the market to turn south?

Maybe for it to happen in less than 24 hours was a little unexpected. But one look at just about any stock chart or index would’ve provided clues that it was only a matter of time before the market gave back Wednesday’s gains.

Here’s a year-to-date chart of the Nasdaq Composite where we’ve seen the worst carnage. 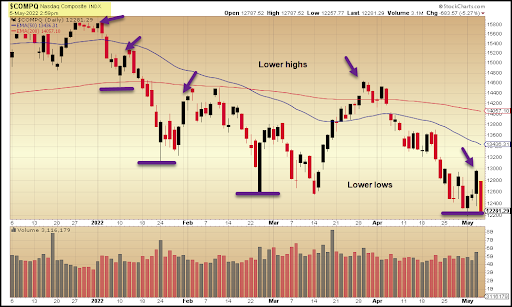 The purple arrows are pointing to lower highs, the purple lines the lower lows. It’s been showing this pattern the entire year. The other indices pretty much mirror that of the Nasdaq although perhaps with drops that were not as steep.

The same issues bringing down the market—rising interest rates aggressively to counter the loose monetary policy that lasted far too long; inflation near 40-year highs; wages not keeping up with inflation; crimped supply chains and, oh, I almost forgot: A war between Ukraine and Russia that’s adding fuel to all the fires.

Right now, it’s like we’re in the middle of a firestorm and trying to put out the flames with a squirt gun.

It’s hard enough watching all the turmoil in the world, but to unnecessarily subject yourself to an unforgiving bear market and watch your money evaporate can be exhausting.

We were in a bull market from the end of the financial crisis in 2008-2009 until the pandemic struck, at which point we experienced the shortest bear market in history from March 2020-April 2020.

I get it. It’s easy to grow complacent and develop a false sense of security in bull markets when money is being made and volatile periods are few and far between.

However, when things do go against your expectations, it’s critical not to panic and freeze or react in ways you’ll later regret.

Emotions have no place in investing. You must look to the technical attributes to gauge stocks. Numbers don’t lie and when they paint an ugly picture you can trust what you’re seeing.

But bear markets go far beyond typical ups and downs. The tech bust is the one that always comes to mind first for me.

With the Internet as the new-fangled technology, many start-ups took advantage of low interest rates in 1998-1999 to invest in and become part of the new revolution. Technology stocks became so hot that between 1995 and the March 2000 peak, the Nasdaq rose 400%. 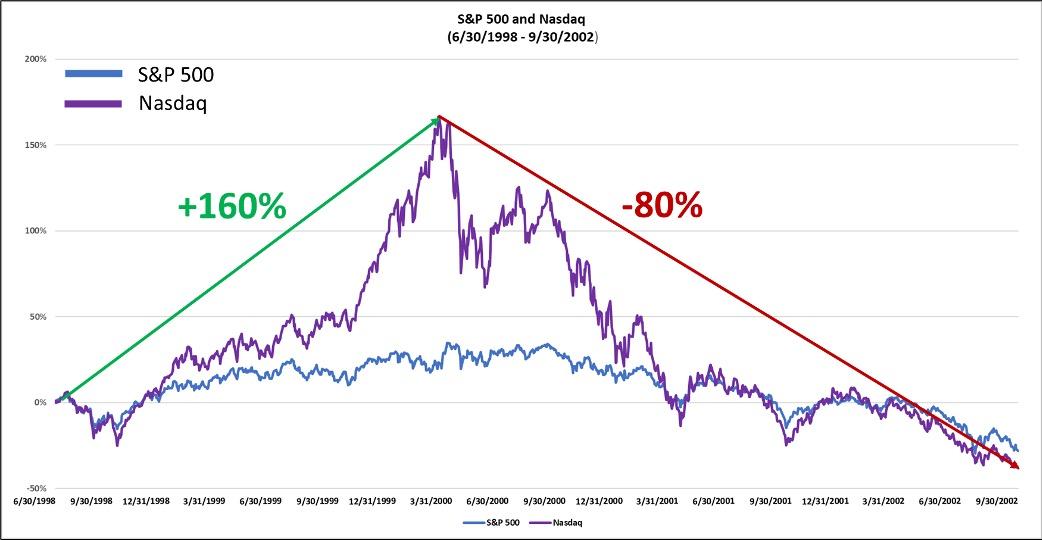 However, when investors started to realize that many companies had little or no value, they began pulling their money out of the market.

The bubble finally burst when the Federal Reserve tightened its monetary policy, limiting the flow of capital. Technology stocks fell 78% from their peak by October 2002, giving up all of their previous gains. And the Nasdaq did not regain its 2001 peak until almost 15 years later.

I don’t know about you, but I’m feeling more than a hint of déjà vu right now.

Bear markets are a whole different animal and call for a different playbook—one that emphasizes capital preservation.

At TMI, we have specific recommendations for how to switch from offense to defense and mitigate risk.

We rely on technical indicators to tell us which sectors are strong and worthy of investing in, and which are weak and should be avoided.

See all that red on the U.S. Industry Bell Curve (just one of many tools on TMI’s Sector Prophets Pro data platform)?

That’s telling us that Supply is in control across most market sectors. The big institutions that move the market needle are unloading, not buying, stocks. You want to follow their lead.

On the contrary, sectors in the blue boxes are attracting big money, and may be worthy of your investment dollars.

It really is that simple.

For all the mothers out there, hope you have a great Mother's Day!