As Tech Tanks, Use This Options Strategy for a Bearish Trade

Here’s what the U.S. Industry Bell Curve looked like back on April 6.

It’s a rather healthy distribution of Red and Blue boxes, with the majority of sectors showing Demand in control (Blue) over the short-term.

But a severe selloff on Friday left the market in really bad shape.

Sometimes we refer to this specific state of the Bell Curve as a “sea of red” or even more appropriately, as a “bloodbath.”

We don’t like to sugarcoat things here at TMI.

So, call it what you want, but this chart from May 2 shows that 44 of the 45 sectors we monitor on our Sector Prophets Pro data platform have Supply in control (red boxes equal Supply, blue boxes equal Demand).

In other words, the big institutions that typically move markets are dumping stocks left and right and everything in between.

Forest Products Paper was the lone survivor, a Commodities-related sector that moved from #39 on April 4 to #1 on April 22 on our Sector Relative Strength Matrix.  Today, it’s at #2 behind Transport Non-Air.

April was not kind to the markets. Investors were rattled by uncertainty, fear, and anxiety in anticipation of the Fed doing something it hadn’t done in 22 years—raise interest rates aggressively–by 50 basis points—which it did on Wednesday.

The S&P 500 is off to its worst year-to-date start since 1939, and the Nasdaq fell 13% in April, its worst monthly performance since the fall of 2008— the height of the financial crisis. The tech-heavy index is down 21% for the year and is now firmly entrenched in a bear market.

Stocks, however, weren’t even the worst performers last month. That unenviable crown goes to crypto king Bitcoin, down 17.8%.

And don’t get me started on bonds. With the yield on the 10-year U.S. Treasury logging its biggest monthly increase in more than a decade (yields rise when bond prices fall) and finding a place to run, hide, or profit seems impossible right now.

Except, of course, for Commodities which Chris Rowe and I have been touting since late 2021. 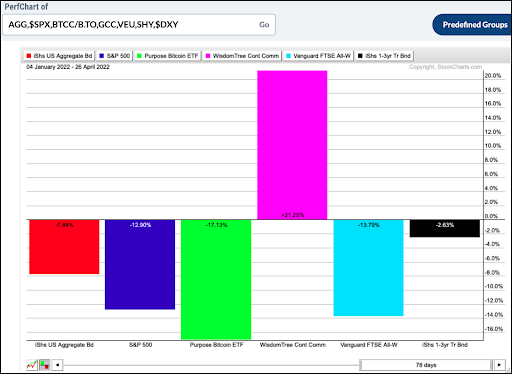 As mentioned, the markets deteriorated last week. But you can still expect continued volatility and additional selling.

There are more rate hikes to come—as many as four in 2022—as the Fed finally aggressively attacks spiraling inflation.

The Fed has also announced the start of its program to reduce its $9 trillion balance sheet, which is made up mainly of U.S. Treasuries and mortgage agency bonds.

Reducing those holdings will further reduce liquidity and raise borrowing costs, helping to accomplish what the Fed is setting out to do: stifle spending and slow economic growth by making loans more expensive for individuals and businesses.

The hope is, of course, that the Fed can slow down the economy just enough to tame inflation, but not so much as to cause a recession. That’s a chancy and challenging balancing act, and it’s not at all clear how it will play out.

In the meantime, don’t get complacent with your investments and just do nothing. And don’t get over eager and begin to snatch up stocks just because they look like bargains. At least not yet.

We’re in uncharted territory, the likes of which few investors, even the savviest have ever navigated.

To repeat, that doesn’t mean you should remain idle. There’s still time to invest in what I believe will be a lengthy Commodities super cycle. And if you haven’t sold your losers and raised cash for the next bull market opportunities, be sure to do that.

Another move you can make is to find a sector or stock you think is going lower and take bearish positions on it.

I think the Technology sector—a decade-long king of relative strength that began to fall out of favor in late 2021—will continue to face stiff headwinds with rising interest rates.

The fastest-growing companies that continue to operate at a loss are the ones impacted most by the sharp rise in interest rates.

Take a look at the U.S. Industry Bell Curve today.

As you can see, Computers, Internet, Software, and Telcom are all shaded in Red boxes with Supply in control. The lone Technology subsector with Demand in control is Semiconductors.

If you are considering a bearish trade, take a look at this chart of $9 billion IT consulting company Globant (GLOB).

Trading around $205, GLOB has fallen below a key support level and could see further downside.

If you just shorted the stock, you would have to commit a lot of capital and open yourself up to unlimited losses should the stock rip higher from here.  You'd also need a margin account with your broker.

Or you could limit your risk and capital by purchasing a Put option (they go up in value when the stock goes lower).

This way you could control a 100-share short stock position for about $1,600, much less than outright shorting the stock.

Better yet, you can greatly reduce the cost of the trade even further by selling a lower Put option against it, say, the June 180 Put, for $7.00.

That reduces the cost by more than 40% and allows for a maximum profit potential of 122% should GLOB trade below $180 at June expiration.

That's a smarter way to make bearish bets and with less cost and less risk.

Those are the types of trades subscribers to my Profit Skimmer options service are privy to.

Got Options? Got Profit Skimmer?  You should!