The 7 Most Important SEC Filings Every Investor Should Know

Across the entire month of April, my fellow True Market Insiders and I have been celebrating National Financial Literacy Month.

To that end, we’ve written 12 articles and four bonus reports for you. We’ve covered topics such as inflation, risk management, seasonality, market indicators, as well as ETFs, stocks, bonds and options.

Today, I have the pleasure of the mic drop… The final April Financial Literacy article.

And that’s fitting, because your investment buck should start and stop with today’s topic, the Securities and Exchange Commission (SEC) and the filings every investor should know.

After all, every publicly traded company, as well as investment banks and huge institutional funds must all report their activities to the SEC.

That means a treasure trove of vital information for smart investors like you.

Now, some might say these filings are dull, dry and boring to read. Nothing could be further from the truth.

As you’ll learn, they’re actually the key to understanding any company with which you entrust your hard-earned capital.

Once there, you can do one of two things: One, enter a company’s name (the green arrow), and see a listing of all that company’s filings.

If you choose the Filings option, you’ll be taken to the SEC’s Edgar website, aka “Electronic Gathering Analysis and Retrieval” system. 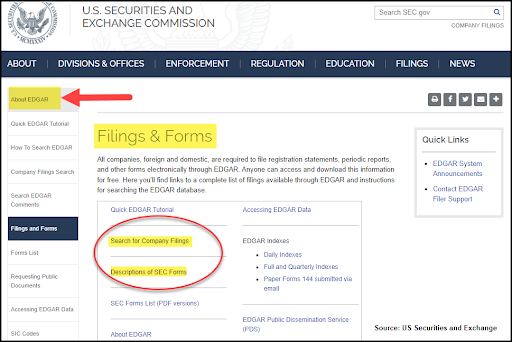 Once on the Edgar site, you can learn more about the Edgar system (red arrow). You can go straight to search for company filings. Or you can even view a list of all of the SEC filings and their uses – the red circle. And there’s a plethora of information that goes on from there.

But today, we’re focused on the most important forms that we investors access most frequently.

Once every quarter, public companies must file a financial statement, accompanied by their Management Discussion and Analysis (MD&A), and several other items. That’d be a 10Q.

And at the end of a company’s fiscal year, management files a 10K, or annual report. It’s somewhat like an expanded version of the 10Q. (Here Apple, Inc. (AAPL) is used only for illustration.)

In both of those filings, you’ll want to look at the financial statements.

Those start with the balance sheet - a picture of the company’s health.

Among other things, the balance sheet allows you to look at a company’s assets and liabilities. Of those, cash, current assets and long term debt are often highlighted.

Generally speaking, you want to see if the company took on too much debt (you’ll usually focus on long-term debt), and if it holds a healthy cash position. Those determinations can help you understand if a company can finance future operations without needing a cash infusion, and if it can service its existing debt.

The statement of operations looks at how well a company is utilizing its money. It also speaks to whether the company is growing, via its top line or revenues.

And at the end of each quarter, you’ll see if the company made a profit or a loss. That’s also where you’ll find the company’s final earnings per share.

In the 10Qs and 10Ks, you’ll also want to read through the MD&A that we mentioned earlier. Like its name suggests, the MD&A is literally management’s rundown of the company’s operations and other pertinent happenings for the quarter or fiscal year.

Lastly, you want to take a quick peek at the Legal Proceedings section of any 10Q or 10K. After all, if management has exposed the company to any legal issues, you’ll want to know about it.

Speaking of management, there are two SEC forms that allow investors to get some great insight into just what the board of directors, chairman/woman, president and CEO, CFO and others, are up to.

Form 4 addresses beneficial ownership. That tells you the number of a company’s shares held by management and any other insiders.

Insiders include anyone who:

As well, Form 4 details when and how they acquired or disposed of those shares.

We often say that we like to see management with “skin in the game.” In other words, we want a management team whose ownership in the company gives them greater incentive to outperform.

One of Wall Street’s favorite 'green lights' (on Form 4) flashes whenever a member of management buys shares of their own company in the open market.

And by the way, when we see management selling, it’s not always cause for concern.

Sometimes, those folks deserve to take a gain after a job well done. Other times, they may need to sell shares in order to pay for a new home, a sudden medical emergency, or a child’s college education.

But, investors want to watch out for systematic selling. That’s especially true if the company is struggling, or if more than one insider is disposing of shares in any given timeframe.

Next, we look at Form 14A, the proxy statement. Proxies are filed prior to a company’s annual meeting. Inside the proxy, management is really soliciting shareholder votes. 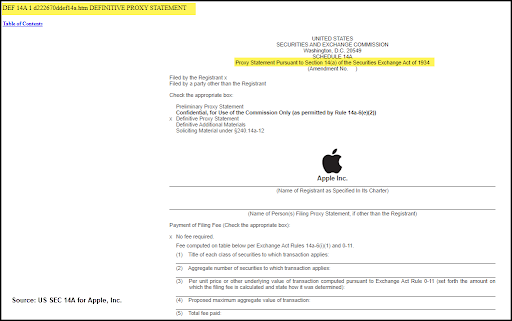 Really, the proxy is worth a read any time you’re considering investment in a company.

Individual investors always want to know what the vastly larger investment crowd is up to. I mean the huge institutional funds. And here’s why:

For starters, the institutional-sized funds control about 80% of U.S. stock markets. Examples of such funds include Berkshire Hathaway, Inc.; Blackstone, Inc.; The Vanguard Group, Inc., BlackRock and Renaissance Technologies, LLC.

So needless to say, the institutional funds move markets.

By looking at their 13F filings, and usually the 13F-HR (Holdings Report), you can learn about the investments those funds are making. (Sometimes, you’ll see a Combination Report when a portion of a fund’s holdings are listed on someone else’s Report.)

So, although the funds usually wait as long as they can to file on the stocks they acquire, minimally, you can get some great investment ideas from their lists of holdings. Also, it’s quite the eye opener seeing the immense size of the holdings these funds own.

You can find the big funds’ Forms 13F by searching each fund name via the SEC’s website:

Form 13F-HR shows a page, often a lengthy scrolling affair, that lists all the fund’s holdings during any given quarter.

Have you ever looked at a stock chart, seen a gigantic spike in volume and wondered, “who’s buying up (or selling) all those shares?” 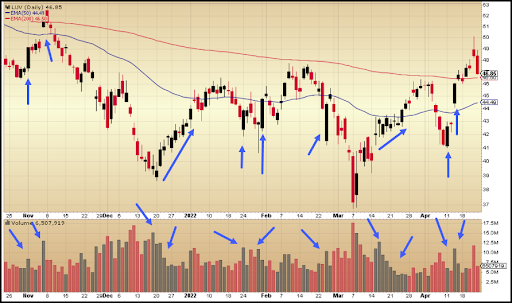 If you have, then pay attention to what follows.

To find out who (or what) is unloading (or loading up on) that stock, go back to the SEC’s website and enter the company name or the stock’s ticker symbol.

When a fund buys 5% or more of a specific class of a company’s outstanding shares, but with no intent to vote those shares, they’re filing as a passive investor.

Once the fund reaches that threshold, it must file with the SEC within 45 calendar days.

Once filed, the fund must also file ownership amendments if their position moves above 10%. That must be done within 10 days of the end of the month in which the purchase is effected.

Then, if their ownership increases or decreases by 5%, they must also file again in that same time period.

If their ownership reaches 20% of the outstanding shares, they must file within 10 days of the purchase, and also include the purpose or intent of that purchase. Such large ownership positions can indicate an ulterior motive, such as a takeover.

And that brings us to the last filing, Form 13D. Some investors think of Form 13D as the “Danger” zone. It’s really all about the filer’s intent.

Anytime a beneficial purchase of 5% or greater is filed with the intent to influence the issuing company, especially by votes, the Form must be filed within 10 days.

This is the one to really watch if there are any rumblings of shareholder dissatisfaction or of a takeover attempt - especially if by a hostile party.

Again, being able to understand who owns what in the markets could give you a major leg up in your trading. In fact, most investors don't know it, but one-in-four merger and acquisition deals involve insider trading.

So you can imagine the advantage you'd gain by being able to spot a "tell" that shows when a deal might be imminent.

And there you have it. That’s the story of the most important SEC filings that you, as a smart investor, want to be in “the know” about.