Is the Trump Rally Overdone? Here’s How to Play it Right Now

Who needs a Santa Claus rally when you have the Trump bump?

Yes, while it’s true that this time of the year is generally considered to be the strongest for equity returns, this year feels more like president-elect Trump not only hijacked Santa’s sleigh, but equipped it with a turbo charged engine.

Since Election Day, the stock market has taken off.

All the major indexes hit new record highs, including the Dow Jones Industrial Average, which is on the verge of eclipsing 20,000 for the first time ever!

Just eight weeks ago, it was an entirely different story. Nearly everyone was sucking on a bag full of sour lemons.

They weren’t the only ones either.

The percentage of professional financial newsletter editors who were bullish on stocks hit the lowest level since the summertime reported by Investors Intelligence Advisors Sentiment.

Even the average individual investor was downright gloomy.  According to the American Association of Individual Investors (AAII) sentiment survey results for the week ending October 12th, only 25.5% of the respondents were bullish on the stocks.

While nearly everyone was bearish on stocks, that wasn’t the case for readers of True Market Insider.

In fact, in the October 20th edition, we actually embraced the broad pessimistic view because, for one, it tends to be a contrary indicator.

Moreover, through our relative strength analysis, the data continued to highlight the fact that domestic equities were the strongest asset class, led by the Technology and Energy sectors.

We argued that using any weakness was an opportunity to buy or accumulate stocks in sectors that were demonstrating positive relative strength.

And last month, we alerted you to another sector that began climbing the ranks with respect to relative strength.  In the November 17th edition, we told you about the financial sector, including several securities that were demonstrating positive relative strength.

As we fast forward to today, many of the stocks and ETFs that we’ve recommended have gone on a yuge run.

But has it gone too far, too fast?

There are definitely warnings signs flashing that suggest stocks are overbought in the short-term and that a pullback may soon emerge.

First, the sentiment readings have reversed from overly bearish to highly bullish.

The bullish to bearish spread among professional financial newsletter writers is the highest since May of 2015, which happened to mark the top of the market for the remainder of the year.

Individual investors have also turned excessively bullish.  According to the AAII, over 40% of respondents polled are bullish on the stock market for the fourth consecutive week in a row for the first time in two-years.

As I mentioned, sentiment readings tend to be contrarian.

Second, there are technical signs that an overbought condition is building.  Momentum indicators such as the Relative Strength Index (RSI) are now at levels that are considered to be overbought.

Also, when you look at the percentage of stocks in the S&P 500 that are trading above their respective 50-day moving average, you’ll find that nearly 80% of the constituents in the index are above the 50-day MA.  Readings above 70% are considered to produce an overbought condition.

And finally, a general sense of complacency has set-in among investors.  Simply looking at the CBOE volatility index (VIX) otherwise known as the “fear gauge” is scraping around 13, a very low reading.  When the volatility reading is low, it implies that option premiums or market protection is very cheap because investors are not fearful of a market decline.

Again, like sentiment, volatility readings tend to be contrarian in nature.

But here’s the thing that Chris Rowe always professes when we’re seeing a market setup like this:

In other words, just because the market keeps moving higher and higher, it doesn’t necessarily mean that it can’t continue to move even higher before eventually alleviating the overbought condition.

That said, there are ways to remain bullish while protecting gains in a market that appears to have run too far, too fast.

One technique that’s effective in this kind of market is a stock replacement strategy.

With volatility historically low, purchasing options is rather attractive because premiums are cheap.

So in essence, we’re going to replace the stock position by purchasing the equivalent amount of call options.

The idea is to sell stock, raise cash and use a small portion of the proceeds to maintain the bullish exposure through the leverage of purchasing Call options.

Here’s how it works.

Take JPMorgan Chase (Symbol: JPM), an investment idea we shared with you in the November 17th edition that we touched upon earlier. 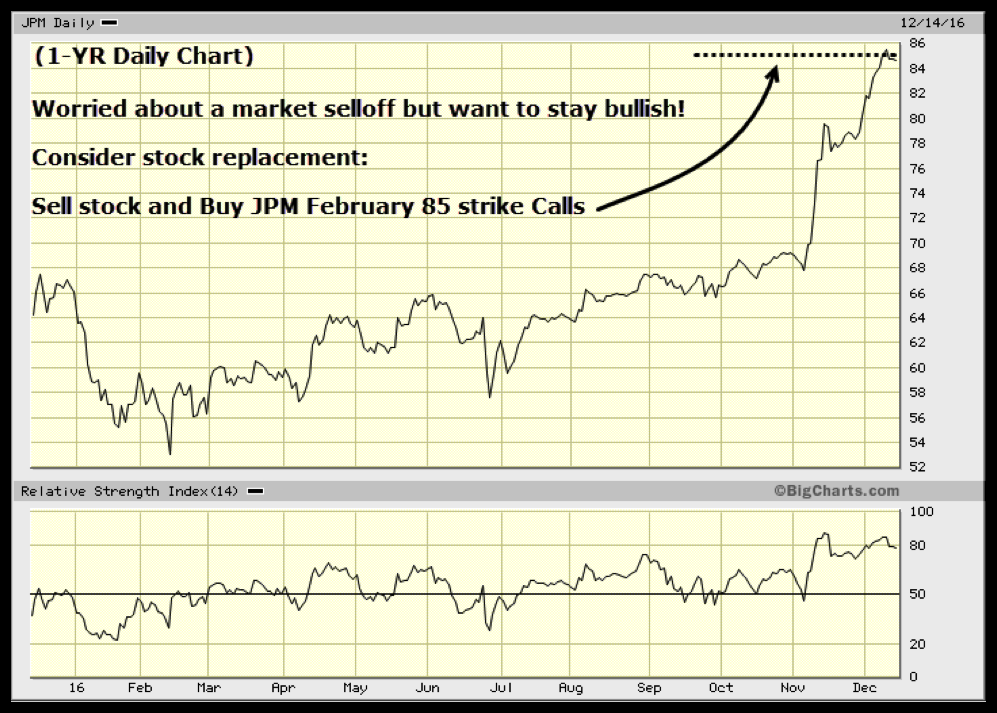 Since Election Day, the stock has gone parabolic, up about 21%!

That’s great news if you own the stock.

But if you’re concerned that the stock is vulnerable to a selloff, you could consider this strategy:

For every 100 shares of JPM that you sell, you’ll want to purchase one Call option as a replacement.

Then, you’ll look to use a small portion of the proceeds to purchase three Call options to replace the stock.  In this example, you could buy three February 85 Call options for $2.80 each.  The three option contracts control 300 shares that cost $280 each or $840 total.

In essence, you’ve spent a little over 3% of the cash to control the same amount of stock.

The Call option gives you just over two months of unlimited upside exposure that happens to cover the next earnings release on January 13th and Trump’s Inauguration on January 20th.

The most you could lose is what you pay for the options, and the upside profit potential is unlimited just like owning the stock. In fact, if the stock continues to trade higher, you’ll profit dollar for dollar above $87.80 (the breakeven price in the call option) between now and expiration.

In the case of a selloff, you now have plenty of cash available to redeploy in JPM or other securities at lower prices.

The stock replacement technique can be a very effective strategy when you want to maintain bullish exposure but become concerned about an overbought market condition.