How to “Bank” on Trump’s Victory

Since the election, markets have been scrambling to reprice a Trump victory.

Domestic equities, commodities, fixed income, currencies and international equities have all been on the move.

You see, leading up to the election, markets were positioned for a Clinton win and a Republican controlled Congress (at least in the House).

That outcome was widely expected.

Buy hey, that’s why they “play the game,” to borrow a sports analogy.

And since the upset, we’ve suddenly seen a significant uptick in dispersion within and among all the asset classes.

In other words, investment capital has been quickly adjusting to the perceived policies of a Trump Administration.

On Tuesday, Chris Rowe and I recorded a short video discussing the impact of a Trump victory and the widening effect that dispersion is having on the markets since the election.

And in the video, we highlighted the fact that the Financial Sector has benefited enormously from a Trump win.

In fact, since the election, the financials have gained 11%, far outpacing the S&P 500 (+2%) and any of the other nine broad sectors that comprise the index during that span.

If you recall, shortly after the first presidential debate between Clinton and Trump, we began the discussion of the probability of a Trump win by applying relative strength analysis using price data from the Iowa Electronics Markets (IEM), a real-money futures exchange where people could wager on the outcome of the election.

And through the analysis, it was clear that Clinton held the advantage.

But that was forty days before the election.

So I went on to say…

“For sure, there will be plenty of twists and turns leading up to Election Day.”

That obviously turned out to be a huge understatement, and the days leading up to the election were filled with more drama than an Emmy winning daytime soap opera.

Yet even though we argued that Clinton may have been a big favorite at the time, it’s wasn’t impossible for Trump to pull off an upset.

So I went on to say…

“But if you think Trump can pull out the victory, there’s probably some very good value in the banking sector ahead of the election because of his pro-banking policies such as reducing the regulatory burdens associated with the Dodd-Frank Act.

One way to get diversified exposure to the banking sector is by purchasing a broad based exchange traded fund such as the Financial Select Sector SPDR Fund (Symbol: XLF).”

Now if we fast forward to today, you can clearly see on the price chart how the financials have benefited from a Trump victory.

(Financial Sector is favored.  But too far, too fast?) 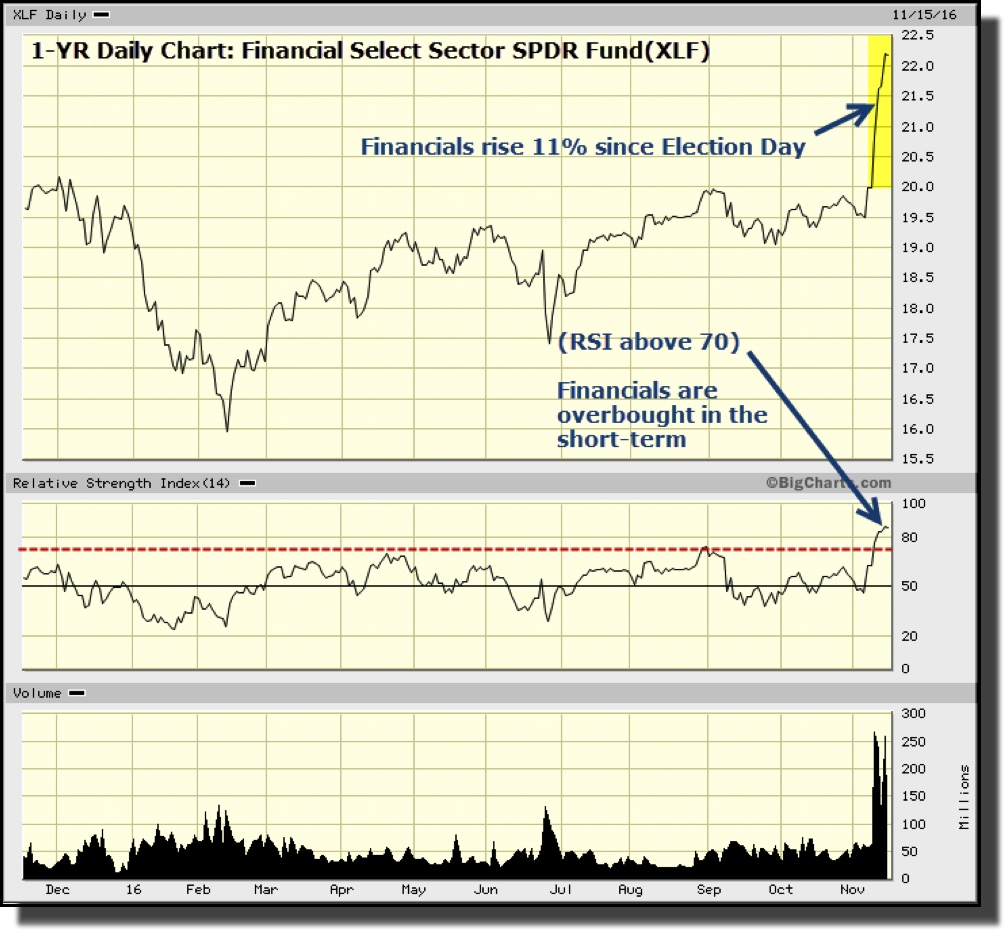 In addition to the Financial Select Sector SPDR Fund (Symbol: XLF), we also shared with you three individual U.S. centric regional bank stocks that were demonstrating high levels of relative strength with respect to the market and versus their sector peers: Bank of Hawaii (Symbol: BOH), CenterState Banks (Symbol: CSFL) and First Republic Bank (Symbol: FRC).

And like the XLF, all three recommendations have seen double-digit gains since Election Day.

If you did not foresee a Trump victory and missed out on buying financial stocks ahead of the election, I certainly can relate.

But now that Trump will be running the show for at least the next four years, the Financial Sector will likely continue to be a favored sector.

A steepening yield curve in interest rates, a roll back in banking regulations and the expectation of higher economic growth under a Trump Administration should all benefit the banking industry.

And the individual stocks that are demonstrating the highest levels of positive relative strength should be the ones on your radar.  The three mentioned above continue to be highly ranked with respect to relative strength.

I also took a look for other highly rated individual banking stocks that are demonstrating positive relative strength.

And finally, you could consider Flagstar Bancorp (Symbol: FBC), a small community bank ($1.6 billion market cap) based in Troy, Michigan.  Flagstar is an under-the-radar savings and loan that’s been steadily growing its share price over the past five years.  The stock continues to demonstrate high levels of relative strength versus the market and against its sector peers.

(Small-Cap community banks should do well under a Trump Administration) 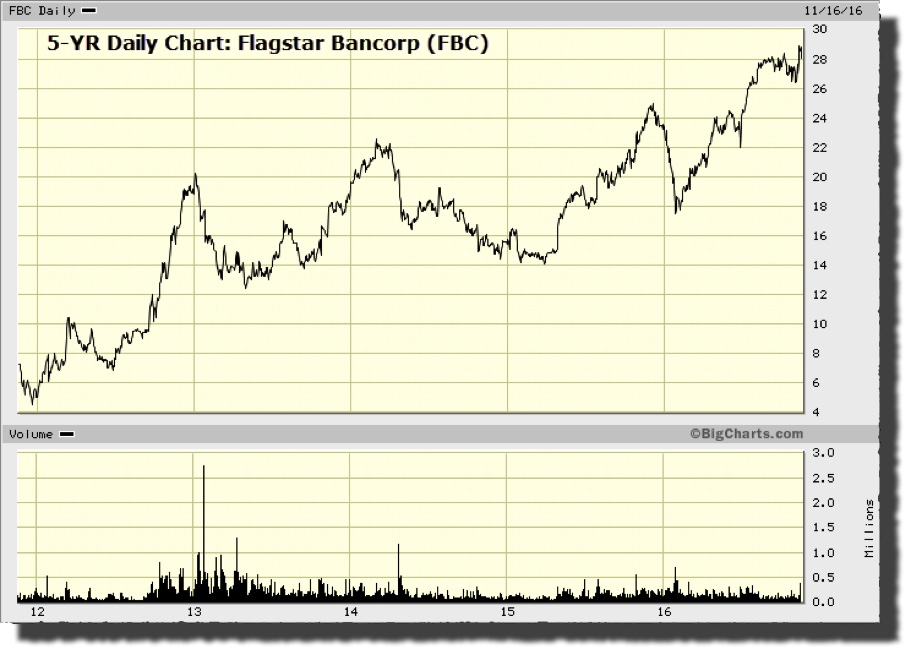 Indeed, investors have been scrambling to reprice the Financial Sector in the wake of a Trump victory that caught practically everyone off guard.

But like the above chart on the Financial Select Sector SPDR Fund (XLF) shows, many of the stocks within the sector are also considered overbought in the short-term, as measured by a popular momentum indicator called the relative strength index (RSI) — not to be confused with relative strength analysis.

When the indicator is above 70, like it’s been recently, trading conditions are considered to be excessively frothy, implying that a near-term pullback is probable.

And that could be great news for investors that missed out on the quick gains but are now interested in adding exposure in the Financial Sector.