In what has to be one of the biggest political feats in history, Donald Trump upset pretty much all of the projections and will become the 45th president of the United States.

“They” said it couldn’t happen…

But it did.  And it clearly caught the markets by surprise:

S&P futures fell more than 100 points overnight when it became clearer that a Trump presidency was going to become a reality.

Then, in a stunning reversal, the S&P 500 not only recovered all the losses… But it’s gunning higher and is within striking distance of hitting all-time record highs as of yesterday afternoon.

Investors tend to be emotional actors.  And when traders realized that Clinton was going to lose, they panicked, fearing a global financial meltdown was about to erupt.

Mr. Market really didn’t care who was going to win.

Instead, it simply wanted a clear winner.  And in the late hours of the election, that is exactly what it got.

Only this time, it just so happened to be the longshot underdog that came out on top; hence the knee jerk reaction.

You see, a Trump victory is a no worse of a result than a Clinton victory, at least in the eye of the market.

The difference is an ideological political preference, nothing more.

The reality is that this country has thrived under the leadership of both the Republicans and the Democrats over the course of our history, and this election is likely to be no different.

There are nuances, of course.  And in this election, we saw the Republicans retain both houses of Congress, which could be viewed as another positive for the markets.

For example, next month the government will need to pass a spending bill and raise the debt ceiling.  Now that the president-elect is a Republican, a lame duck President Obama will likely acquiesce to whatever Congressional action is taken until Trump is sworn in.

And in his first 100 days, Trump should have an easier path working with a Republican Congress.  Corporate tax reform, deregulation and an infrastructure spending bill are some of the things on the table that could give the economy a boost.

Also, a tax holiday to repatriate foreign cash may finally come to fruition under a Trump Administration.

U.S. corporations are holding more than $2.5 trillion in profits overseas.  And because the U.S. has the world’s highest corporate tax rate at 35 percent, American companies have been reluctant to bring the cash back home.

So by offering a one-time reduced tax-rate on foreign profits, we will see a huge amount of cash filter back into the domestic economy.

The government can use the tax proceeds to fund the infrastructure spending.

And corporations can use the free cash to buy back stock, pay out dividends, make acquisitions and invest in plants and equipment.

It’s viewed as a win/win situation for the economy and a positive for equities and risk assets.

With a Trump Win, What Should Investors Do Now?

Maybe the election turned out the way you hoped it would.  Maybe it didn’t.

But the reality is that Donald Trump will be the next president of the United States for at least the next four years.

Nothing’s going to change that.

So as investors, we should focus less on elephants and donkeys and more on what the price action is telling us.

And right now, domestic equites and commodities continue to be the two strongest asset classes with respect to relative strength.

In last week’s article, we told you that the Steel & Iron Sector sat atop the rankings of our relative strength matrix.  It not only continues to maintain its top rank, but several of the stock recommendations within the sector that we recently featured in our monthly Sector Focus newsletter have already produced double-digits gains.

(To learn more about Sector Focus, and for access to premium research -- including the specific investment recommendations -- click here.)

Also, two weeks ago, we reiterated the positive relative strength that the Aerospace & Defense Sector has been demonstrating.  This sector has been steadily climbing the rankings in our Relative Strength matrix and is now in the top decile of the more than 40 sectors that we track.

We argued that whichever candidate happened to win the presidential election, the Aerospace & Defense Sector would benefit from increased military spending.

If you recall, we recommended purchasing the iShares US Aerospace & Defense ETF (Symbol: ITA) on any near-term weakness.

Yesterday, the exchange traded fund gained five percent and is breaking out to a new all-time record high. 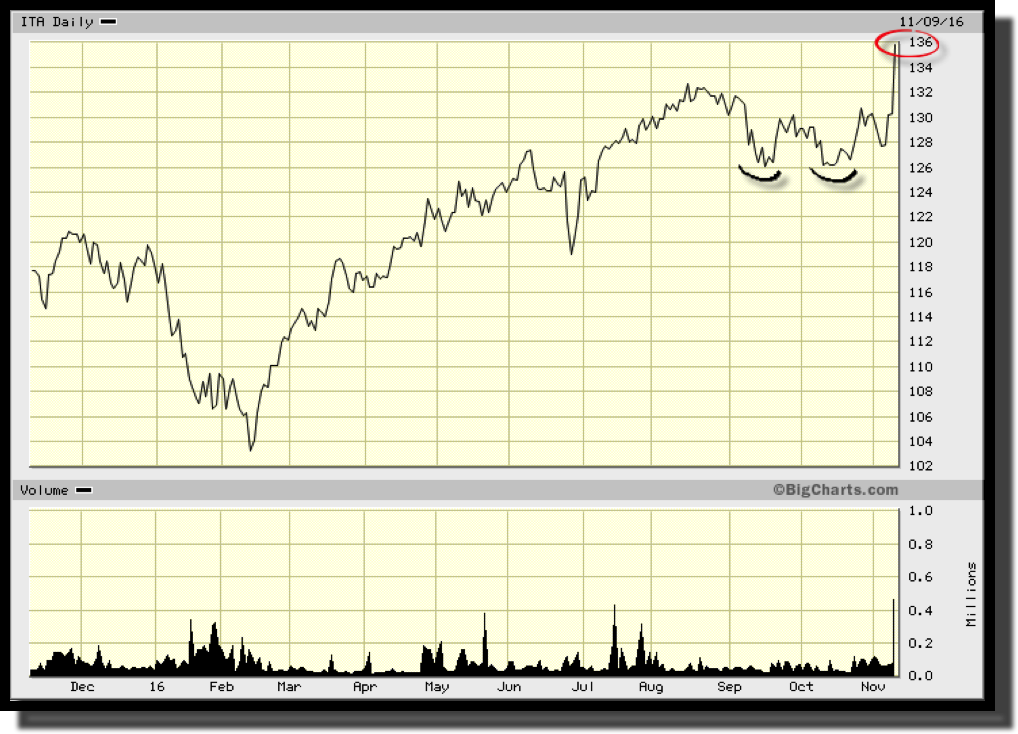 With the contentious elections now behind us, I’m hopeful that the country can unite around the new leadership and move this country forward in a positive fashion.