The Mother of All Rotations is Happening Now 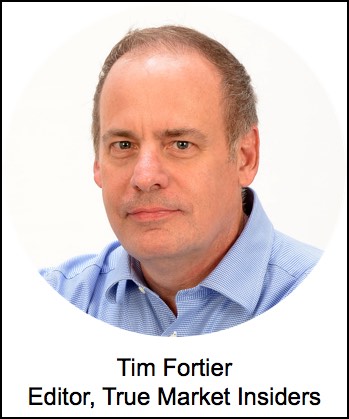 Here we are just two weeks into the New Year and the market is getting very interesting.

By very interesting, I mean, the mother of all rotations is underway.  If you get this wrong, it will cost you a fortune.  Get this right, and you can make you a fortune.

Let's take a look at what I am referring to.

It was almost a year ago that I first cautioned you about rising interest rates.  At the time, the Ten-Year Treasury rate was approaching 1.75%

I followed that up with another article that urged investors to be especially careful buying tech stocks in a rising interest rates environment.  I pointed out the stocks with high valuations would be extremely vulnerable if interest rates were to continue to rise,

With the Fed doing it's best to dismiss inflation as "transitory", interest rates paused their ascent until more recently, when the rising costs of goods and services could simply be no longer ignored.

In December, Federal Reserve Chair Jerome Powell, announced that the FOMC will double the rate at which it reduces monthly assett purchases, thus increasing the "tapering" at double the expected rate.

This was the catalyst for the worst calendar week total return in at least 49-year history as the  30-Year long-bond lost 9.35%! 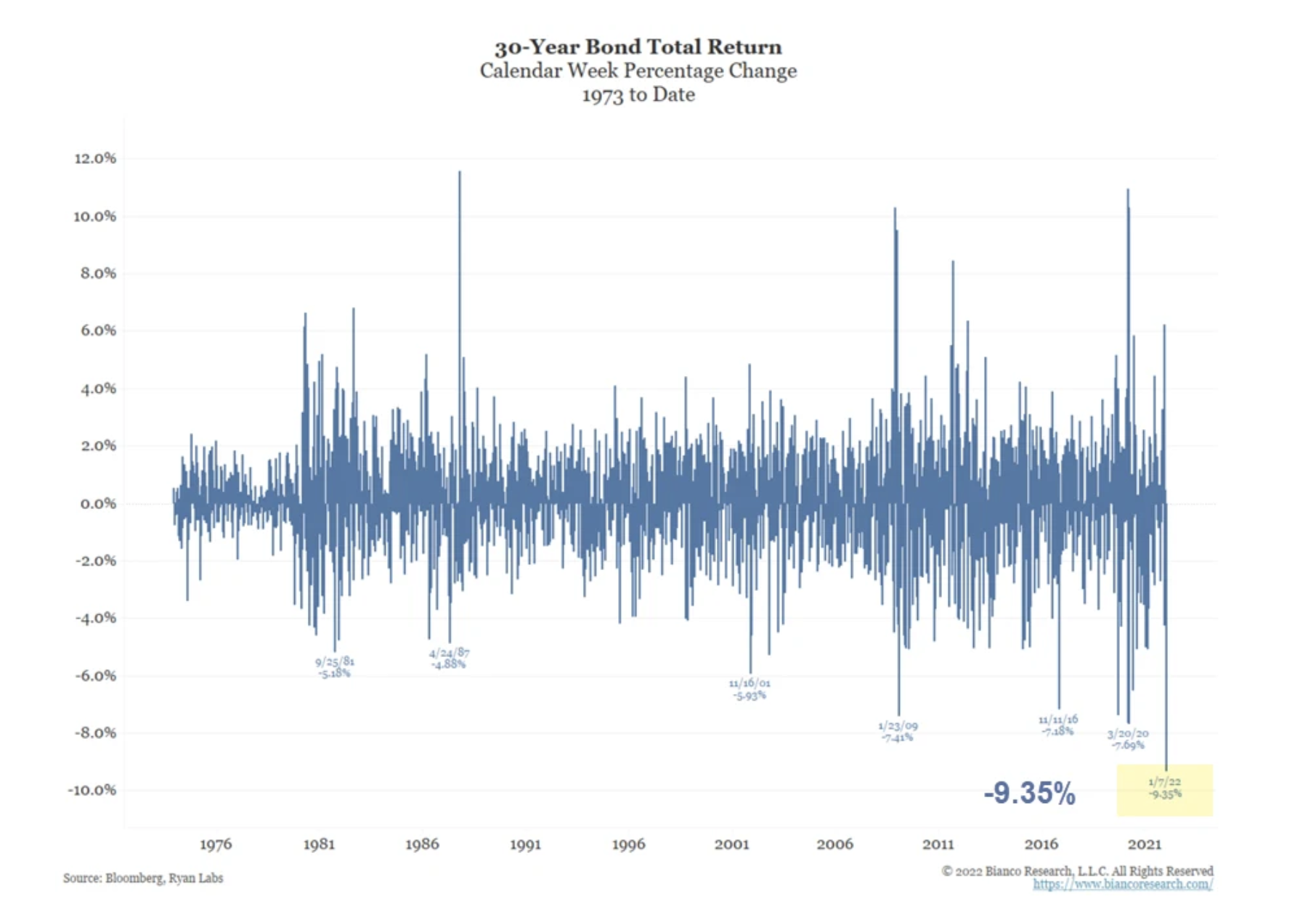 The 10-year note finished it worst week in 42 years, with a total return loss of -4.24%. Only Feb 1980 saw a bigger loss for a calendar-week loss (the Volcker inflation panic, when the funds rate headed to 21%). 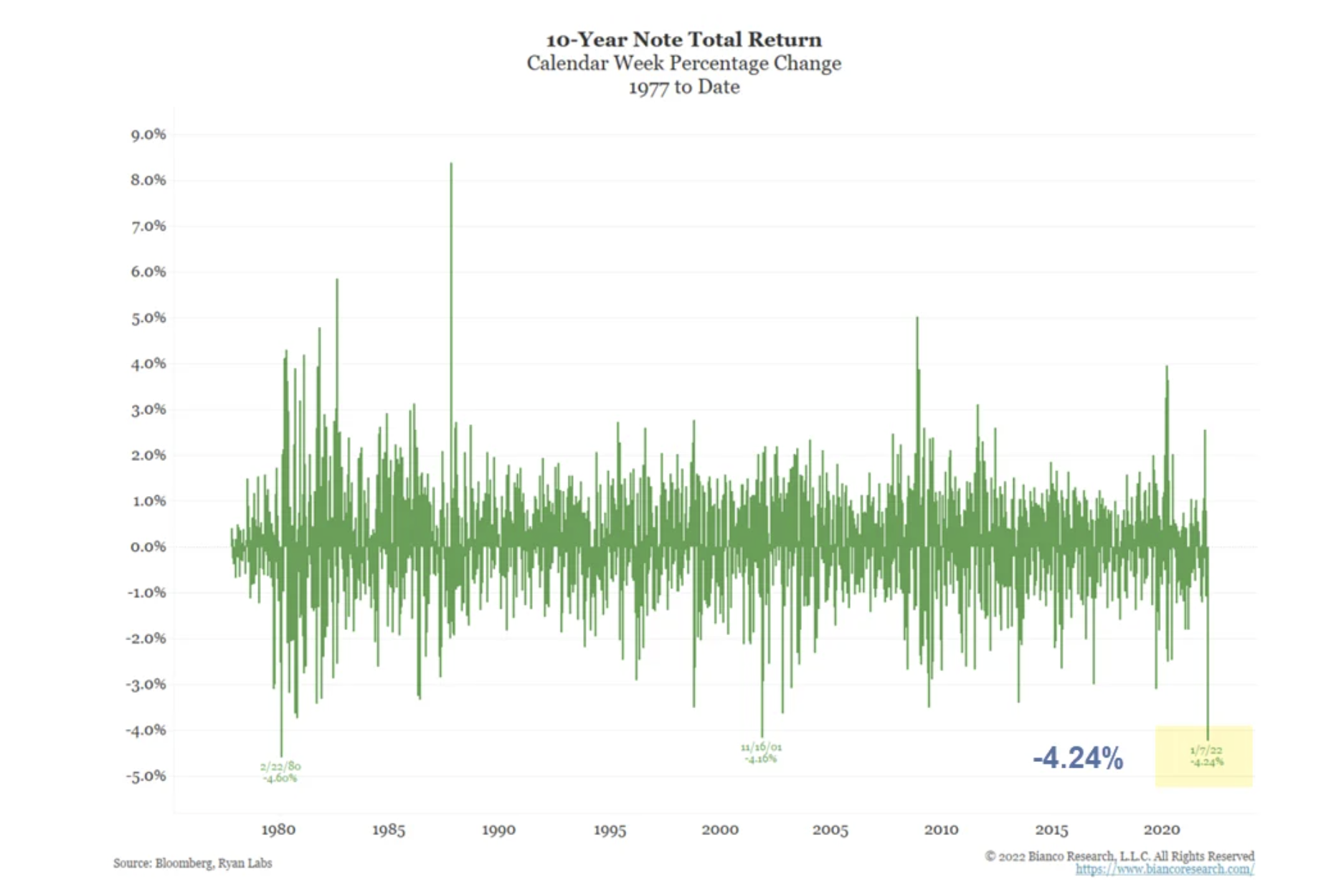 Why is this so epic? I believe the whole bond market finally realized that easy money is over and that QT is coming. For weeks many bond players argued that the Fed would do fewer than four hikes and that there would be no QT. Not after the last December FOMC minutes. 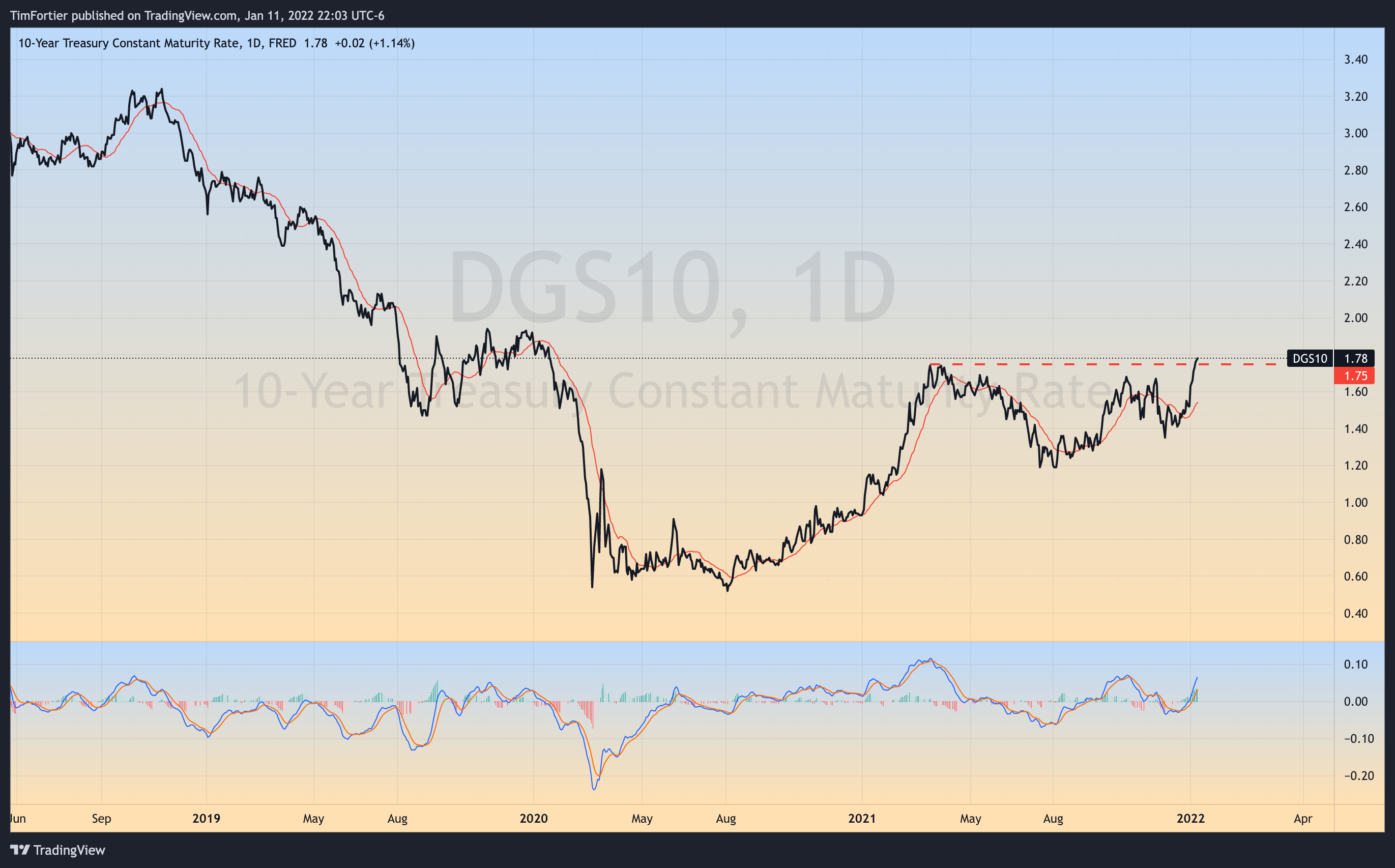 And considering that after subtracting inflation the return is actually negative, it's reasonable to project rates to be even higher still.

In case there was any doubt, during his confirmation hearing yesterday before the Senate Banking Committee, Mr. Powell's stated that the central bank will use its tools “to prevent higher inflation from becoming entrenched."

Which brings us to "the great rotation."

As I've noted on many occasions, over the past year we've watched breadth deteriorate within the market.

Within the Nasdaq Composite index (but masked by the outperformance of a handful of mega-cap stocks) significant losses are taking place.

As the following graphic shows, there is no precedent for so many stocks being in a bear market when the index itself was not. 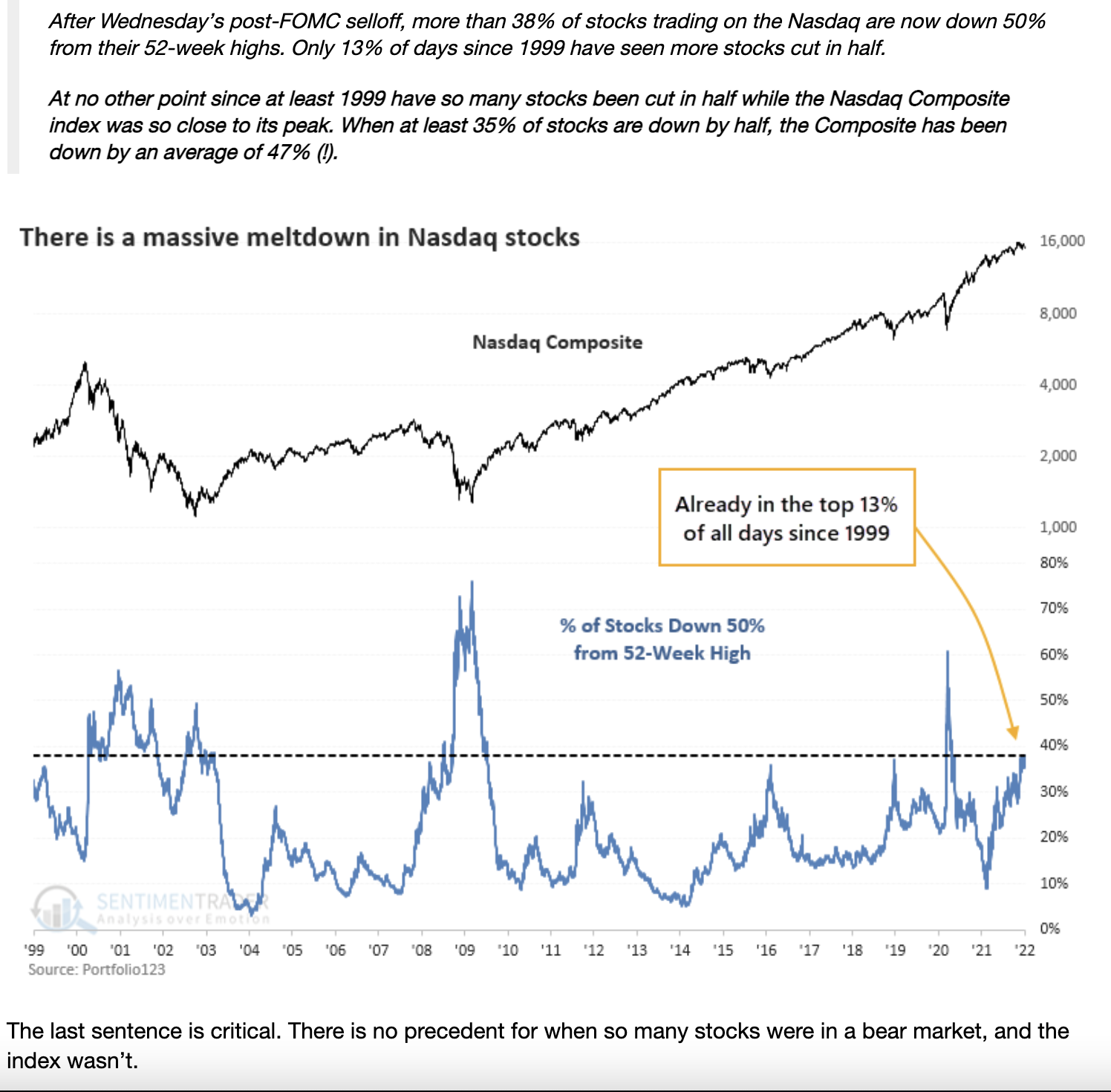 Well, friends, it looks like the party is officially over.

During the past several days, the Nasdaq 100 has broken below the sideways consolidation it has been in since early November (when Powell began to hint to change in Fed policy). 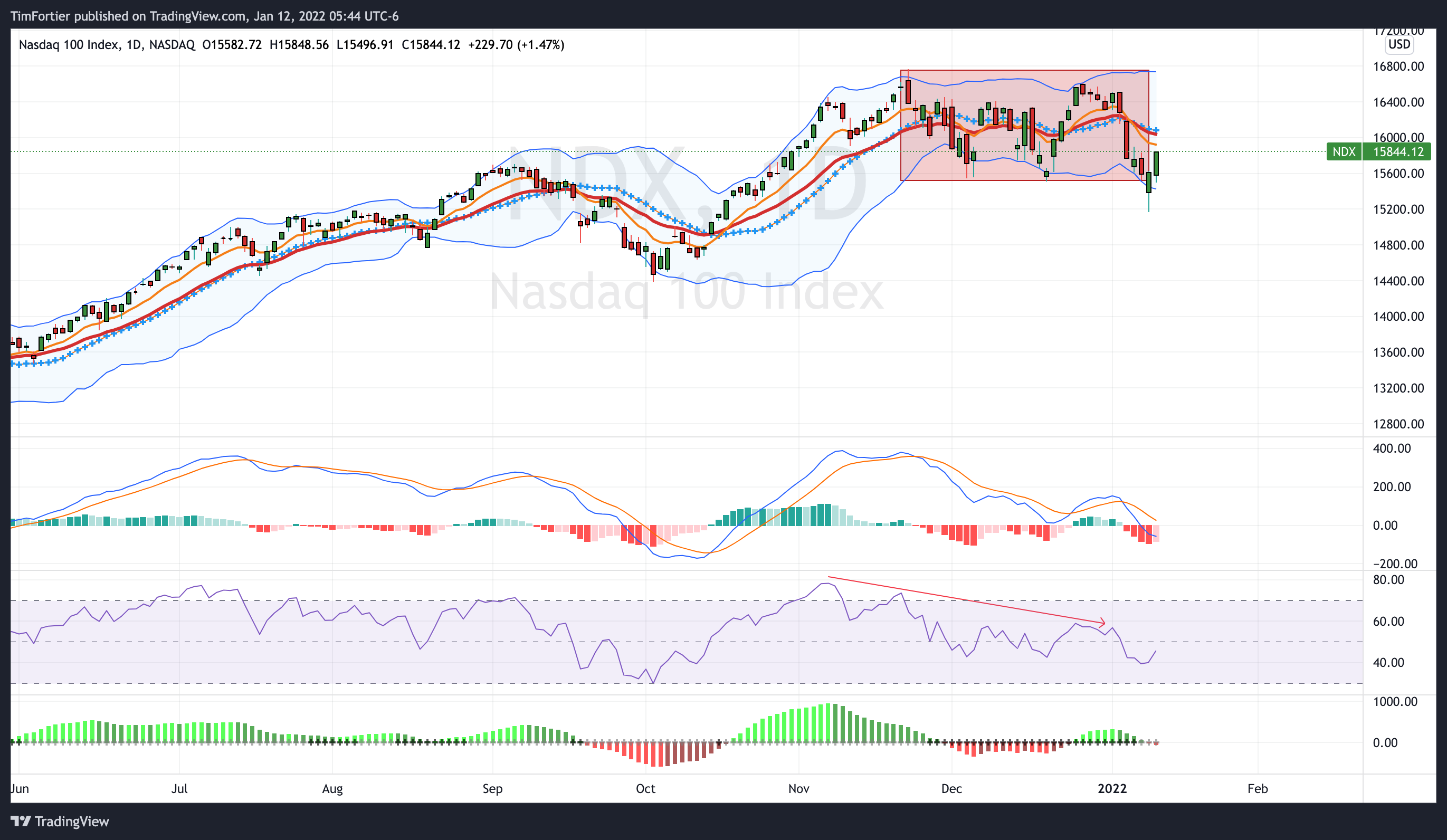 This means that selling has now begun to include the handful of names that have helped elevate this index.

And when the current bounce is over, I expect the downward trend to continue.

The good news for investors is that money is not leaving the market per se, but rather is rotating into different themes.

Here is the evidence...

In the chart below I compare the performance of value stocks (the purple line) to both growth stocks (the blue line) and long treasuries (the red line). 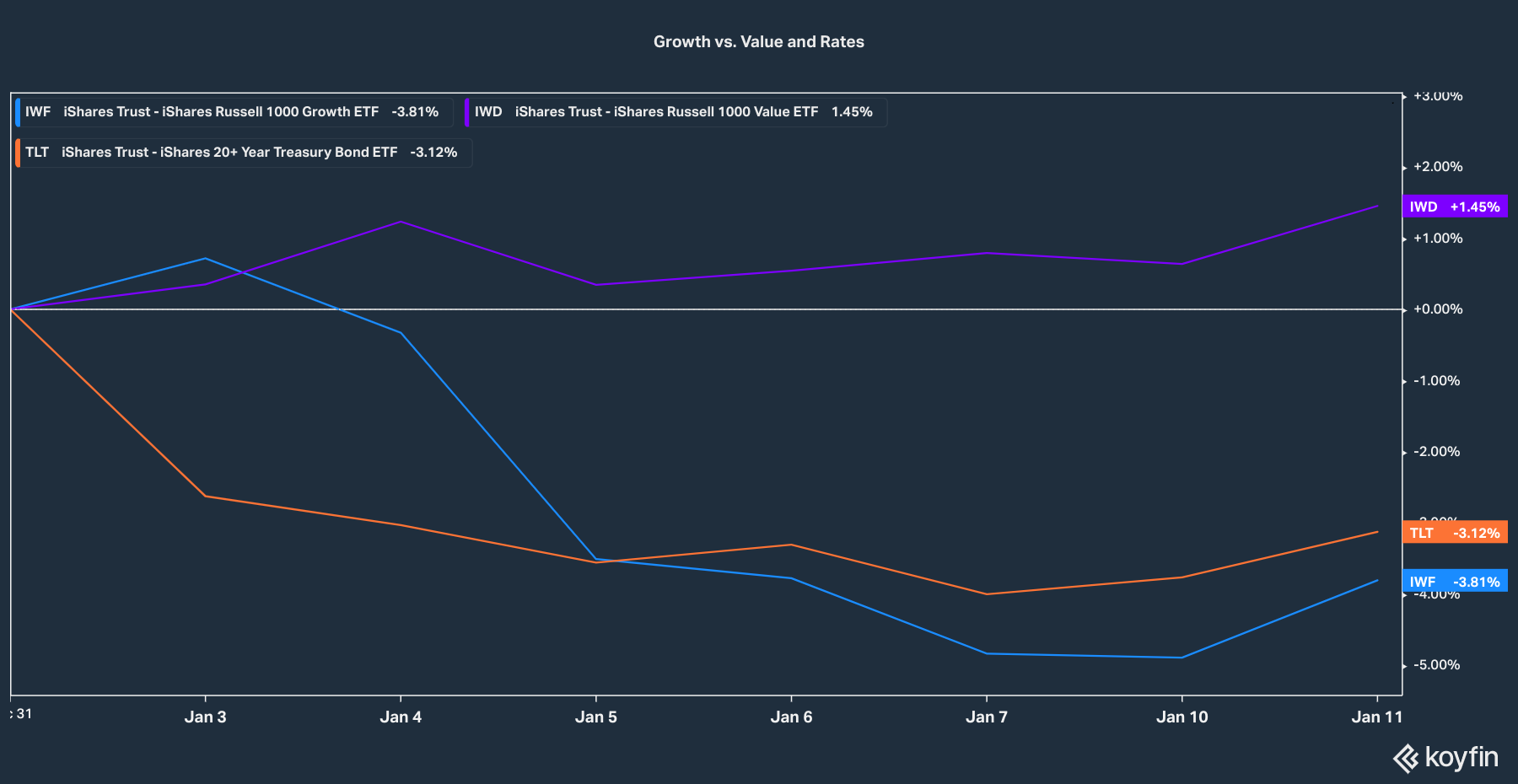 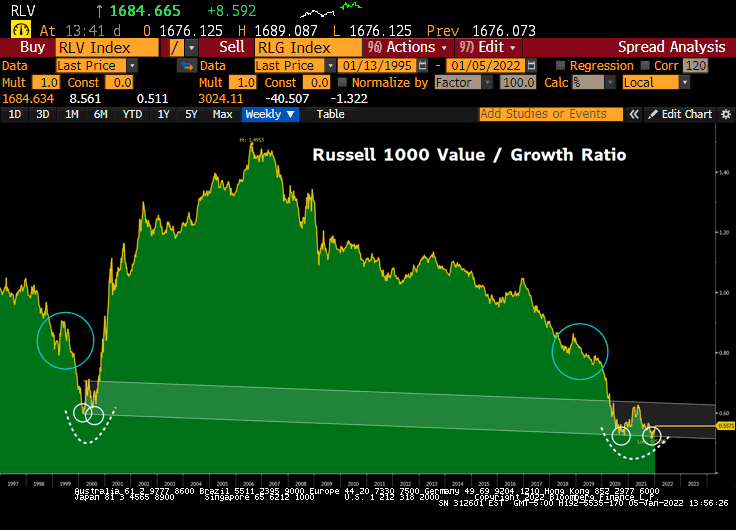 The Russell 1000 value/growth ratio (large caps) has doubled-bottomed and is now heading higher (value outperformance). As you can see by the curved dotted lines on the left and right of the chart, this is very similar technically to the bottom in the ratio we saw during the peak of the infamous dot-com bubble.

A month ago, there was $18 trillion in the Nasdaq 100 -- significant amount of capital available to be reallocated.

To start 2022, money is flowing out of financial assets and into hard assets. Commodities (and commodity exposed equities) are rallying as global long-end yields grind higher.

The market is telling us Covid is rolling-over which is therefore sparking an increase in global growth expectations.

Thus, it is no surprise that Oil & Coal, Oil Service, Utility Gas, Steel & Iron, and Metals Non-Ferrous are among our top-ranked sectors as we head into 2022.

I will wrap up with a quote Tomorrow's Gold by Marc Faber...

A large bowl of water that shifts on top of a pivot. The water is never flat, it splashes from one side to another. The water represents money, and the money moves from one sector to another - often violently when people have lopsided positioning.

The hammering in technology stocks that began to spread into the broader market Wednesday is being fueled by one of the most intense bouts of selling by professional speculators since the financial crisis.

Hedge funds, which spent December unloading high-growth, high-valuation stocks, began the new year with additional furious selling, that according to Goldman, is at a pace we haven't seen for ten years.

Rather than fight the tidal wave of selling in growth and cap-weighted indexes, investors may want to seek relative safety in value and natural resource holdings that are performing much better.

Thanks for reading, and I'll see you soon.