Car Prices Driving You Crazy? Here’s How to Stay Sane

There seem to be two mindsets when it comes to cars.

Enthusiasts are as passionate about them as they are about anything—or anyone else in their lives. They grow emotionally attached to their cars, call them Betsy, or Ruby, or Bertha. Whisper sweet nothings to them when no one’s looking. They coddle and cuddle them like babies.

Others simply look at them as pieces of metal that they hope will get them from point A to point B. Style means nothing. They ignore the red “idiot” lights (do cars even have them anymore?), that beg for more oil. They call them names, too, names I can’t repeat in polite company.

I happen to be of the former variety of car owners. A car to me is much, much more than a mode of transportation to just use and abuse. I care what it looks like, drives like, and I make sure to treat it with TLC.

I’ll even admit the ones I own often reflect my personality. 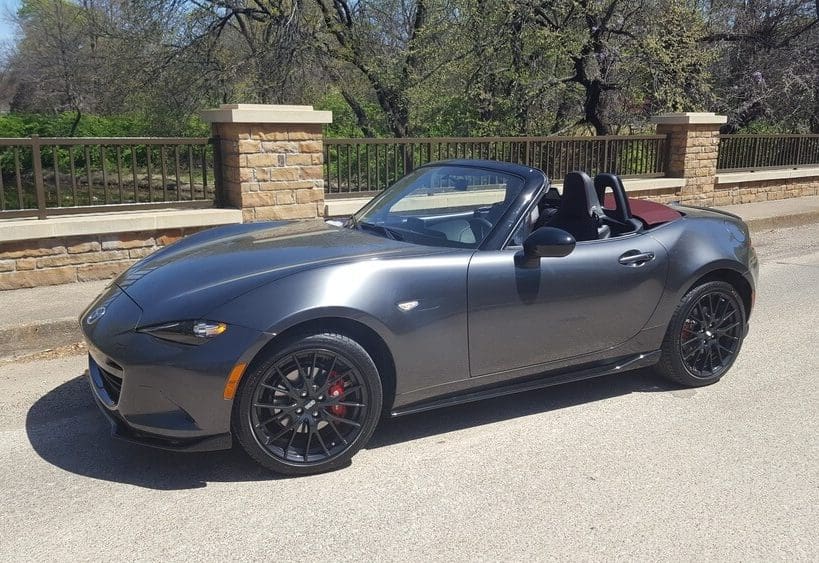 And, it has a manual transmission to boot.

Anyway, I bought it three years ago with about 3,500 miles on it. I’ve only added 12,000, and, as you probably figured, pampered and kept it in great condition.

I’m not looking to sell it or anything. But all this news about the cost of cars—particularly used ones—had me curious about its retail value. So I went to Kelley Blue Book, punched in the pertinent information, and discovered that it is now worth more than I paid for it, even as a trade-in.

I’m thrilled, but for people looking for a used or new car—regardless of where you sit on the “enthusiast” spectrum—it’s not so great. In normal times, once you drive a car off a lot it immediately depreciates. That’s no longer necessarily true.

And some cars—like mine—are worth even more than they cost when they were new or slightly used.

The reason is simple. The shortage of computer chips due to pandemic-related supply chain issues has resulted in low inventories of new cars, and higher demand for used ones.

When chip factories shut down early in the pandemic, it caused a shortfall of an estimated eight million vehicles in 2021, says Consumer Reports. Those that could be found sold for record prices.

In fact, autos were one of the biggest drivers of inflation last year. According to my go-to source, Kelley Blue Book, used car listing prices in November 2021 averaged $27,569, an increase of 27% from a year ago.

Interestingly, for most automakers, none of this equates to greater sales or revenue. New vehicle sales rebounded slightly last year from 2020′s dismal numbers but were still about two million shy of pre-pandemic levels.

The real winners in this current price environment? Car dealers. Used car sales are more profitable with service and repairs accounting for the most lucrative part of the business.

Before I delve into possible stocks, understand that while this is one of the more significant trends that developed last year, the Auto & Parts sector is not as strong technically as I'd like it to be.

It's currently ranked #30 out of 45 sectors on our Relative Strength Matrix on TMI’s Sector Prophets Pro data platform.

The good news is, two other indicators show that demand is returning to Auto & Parts. Notice the right hand side of the Sector Relative Strength Matrix History chart, below. 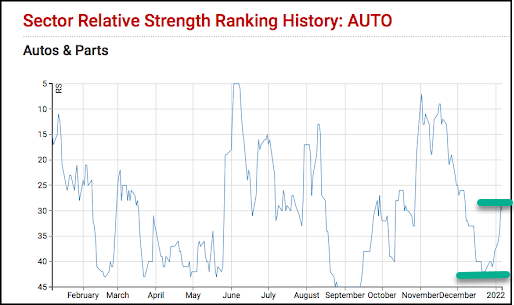 The green lines show where the sector has been heading higher in the rankings since December 21, when it was ranked #43.

And, as you can see from the US Industry Bell Curve, the sector is in a blue box (circled), indicating that it is in a column of X's on its Bullish Percent Index (BPI) chart.

That tells us that demand is in control.

As the technical picture improves, I’ll revisit the sector and the three stocks I see as future contenders. (If they don't measure up, I'll bring you others.)

Here are three future contenders: AutoNation (AN) is the nation's largest auto retailer, with roughly 2% of the US market.

The $7.3 billion company is expected to deliver record earnings in its February report.

The company also announced a big push into the used car market with its new AutoNation USA used car brand. It opened its fifth such store in early 2021 and expects to open another 12 this year and well on its way to 130 used car-only locations by 2026.

Like AutoNation, Carmax (KMX), is making more than ever as the nation’s largest used-car only dealership. In the third-quarter fiscal 2021 financial report, it revealed record net revenues of $8.5 billion, up a whopping 64% year-over-year.

Retail and wholesale sales rose nearly 30% that same quarter, largely due to its online buying opportunities. Its popular trade-in program also helped the company to increase inventory. About 194,000 of the cars came through that program, which is tied to its instant appraisal service.

According to J.D. Power, the auto market has been in uncharted waters since the beginning of 2021 and expects the used car shortage to continue and worsen possibly through 2024.

CARS joined the S&P SmallCap 600 index in December 2021, a move that should attract more institutional money.

I’ve been following this trend for some time, and it’s not one that’s going away any time soon. Once the technical picture improves, I’ll revisit the sector and stocks.

In the meantime, if you’re not the type to take care of your cars, now might be a good time to start. The longer it lasts, the longer you can avoid this crazy car market.

Drive carefully out there (and Go Bills!)