Take a ‘Cheaper’ Bite Out of This $3 Trillion Company

Apple (AAPL) has never really been consumed with being first at anything,

although the Macintosh computer and iPhone certainly fit that bill.

For the company’s original CEO Steve Jobs, and his successor Tim Cook, it’s always been more about taking a concept—be it one of Apple’s or a competitor’s, a new or an existing—and making it bigger (or smaller), better, and cooler.

That’s what’s behind the celebrated passion or even fanaticism that makes the company seem larger than life.

Think about it. Team Apple managed to pick off BlackBerry, Nokia, and Motorola, all in short order.

Even Kodak failed shortly after the iPhone debuted because film lost its relevance.

Apple created the concept of an “app” and broke down long-held barriers to direct consumer access.

Not firsts. Instead, these were all devices or technologies that made life that much easier and enjoyable to consumers of its product.

Ironically, all that ingenuity since its inception in 1976 has led to another historical first—for any company in any industry.

A Bearer of Big Fruit

Just a few days into a new year, Apple became the first company in history to reach a $3 trillion market capitalization. That’s a huge milestone, eclipsing the $1 trillion point the company hit in August 2018, and the $2 trillion mark it achieved two years later in August 2020.

This gargantuan growth is the result of keying in on consumers’ needs and wants and thus fulfilling its promises year after year.

That was especially apparent in the first quarter of fiscal 2021, where Apple reeled in $111.4 billion in revenue for the three-month holiday period for a year-over-year increase of 21%. That $100-billion-plus figure represented a “personal best" for revenue in a single quarter.

Like most Big Tech companies, Apple benefited from pent-up demand for technology during the pandemic. Of course, that begs the question: Will that rapid growth slow down once the pandemic eases further?

And will “sticker shock” set in as inflation rises and interest rates finally move upward?

The answer to those questions are more far-reaching and pertinent than you might think.

Some might say, “as goes Apple, so go the markets,” because the company makes up 7% of the S&P 500 and is the single most liquid, largest publicly traded stock in the universe.

So, with the wind at Apple’s back pushing the broad indices to higher highs—70 record closes in the S&P 500 in 2021 alone—it was “same as it ever was” until Wednesday when investors took profits from the table. The tech-laden Nasdaq lost 3.34%, while AAPL fared slightly better, down 2.66%.

On Dec. 30, the New York Stock Exchange Bullish Percentage Index (BPI), our granddaddy of all indicators, made a move from a column of O’s to X’s—hinting at short-term bullishness. 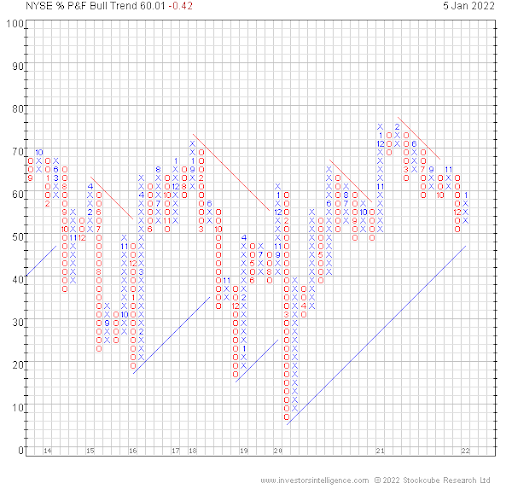 We’ll have to wait and see how that movement plays out. Until then, be sure to check out Bill Spencer’s analysis on the BPI here.

As for Apple, it’s heading into a new year with its usual fan-pleasing devices and gadgets. More importantly, the company aims to make waves in a number of other industries like Telehealth, and Electric Vehicles.

Rumor has it that Apple’s next devices will take advantage of LEO (low-earth orbit) satellites.

This is a company experiencing the kind of growth you may want to own, especially if  you can own shares at a lower, discounted price.

And if you can’t, how does earning a fat, double-digit, +16.3% annualized return on your investable cash sound?

We can do this using one of my favorite options techniques.

The technique I want to show you today involves selling out-of-the-money Put options on stocks that you want to own but don't own yet.

How to BUY Apple for a Discount... or Get Paid Trying

Let’s say you’re interested in buying 100 shares of AAPL but would prefer to buy it at a lower price. 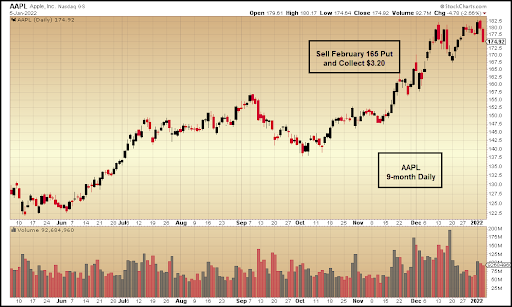 You’ll also want to target a relatively nearby expiration date, typically less than 90 days away.

By selling one Put option contract, you get to immediately collect $320 in premium. That cash is yours to keep. It’s immediately credited to your account and the funds are usually available the following day.

In exchange for receiving that upfront cash, you’d be obligated to buy AAPL at $165 per share between now and the February expiration, which is in 43 days.

We’re obligated to buy AAPL at $165. Yesterday afternoon, the stock was trading around $177—or about 7% higher.

Well, in that scenario, we should be okay with that because our original intention was to gain bullish exposure in the stock.

Our cost basis would actually be further reduced by the $320 in cash we pocketed. So, factoring in the cash payment, you’d be buying into the position for $161.80 per share, and not at the recent market price of $177.

That would represent a discounted price of about 10% from where it’s trading.

Now, what if the stock doesn’t fall below $165 at expiration?

In that scenario, we won’t get to own AAPL at a discount, but we have $320 in cash to show for our foresight and savvy. That premium we collected equates to a +16.3% annualized return over the life of the contract.

That might be the easiest money you’ve made on a trade, but hopefully it won’t be the last.

Got options?  You should!

See you next time,