Micro-Cap Monday - Here's an Undervalued Gem from an Overpowering Sector

Hi there, Happy New Year to you!

I hope you had a restful holiday.

Back in my wanna-be-rock-star days, I spent many a New Year's Eve on stage in one club or another with one band or another.

Some years we got to perform to packed rooms -- it's New Year's Eve after all.

But on other years we played to empty rooms and to the sound of crickets -- drunk crickets at that.

I began thinking of that 50/50 New Year's Eve thing as I was putting this column together. You see, today I have a very attractive micro-cap stock that lives in the Semiconductors sector.

If you've stopped by this space regularly since September, you'll be familiar with the sector. That's because we've looked to the Semis for trading ideas on four separate occasions.

Our most recent play on Semiconductors is AMPG, from December 20. The stock rose 16.5% before falling back a bit. It's currently up 8.24%.

In the intermediate-term I think we'll see all four of those stocks – plus the one you're about to read about – post significant gains. And the reason is – the sector.

When we talked about AMPG on December 20, the Semis were ranked #29 out of the 45 sectors we track at True Market Insiders.

I wrote, "We shouldn’t expect this sector to stay at #29 for long." Sure enough, just seven days later Semiconductors was ranked #1, and right now it's ranked #5. 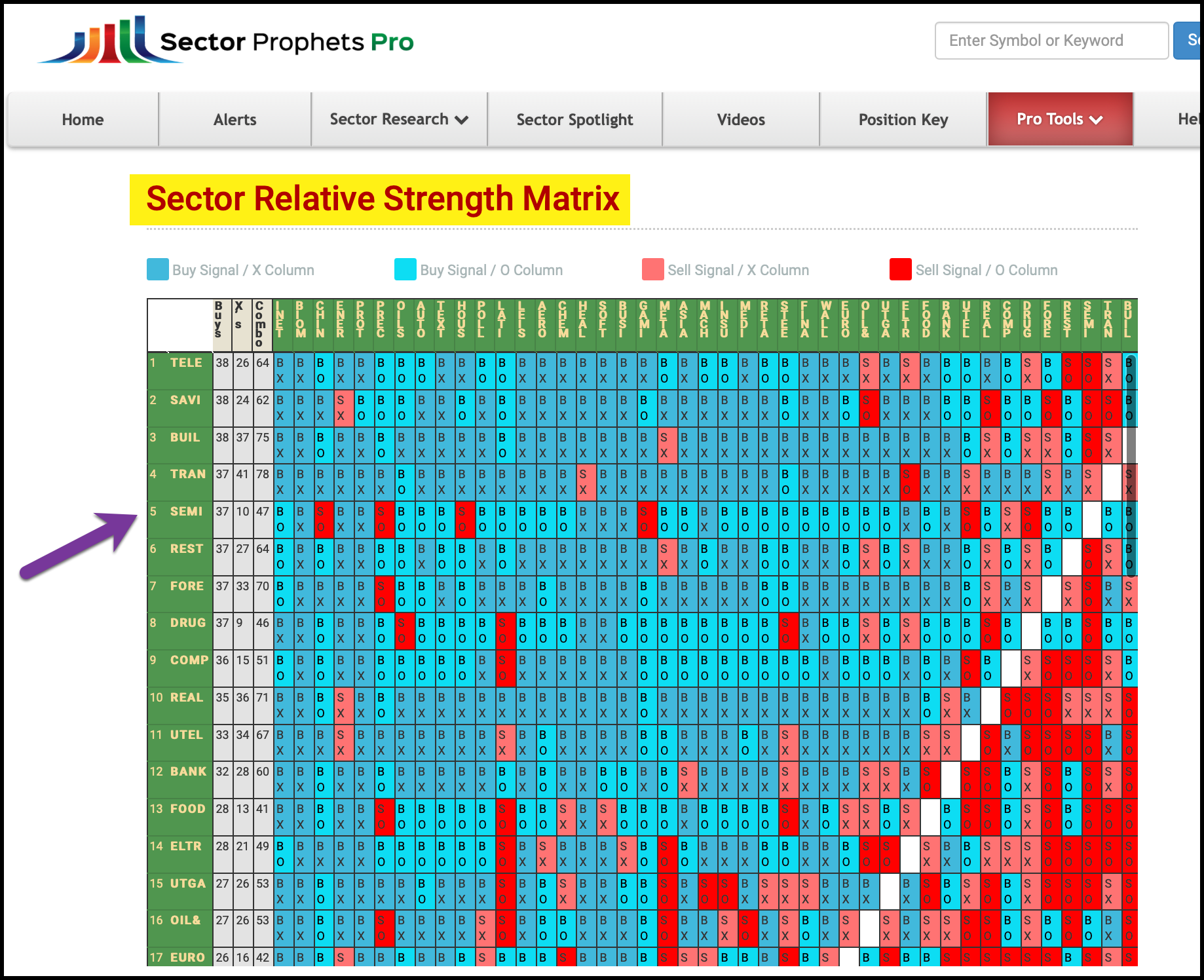 The Semiconductors Sector Gets Stronger

The sector's Bullish Percent Index Chart (BPI) is in a rising column of O's and just went on a point-and-figure Buy signal when the current X-column (highlighted in yellow, below) got higher than the previous X-column. 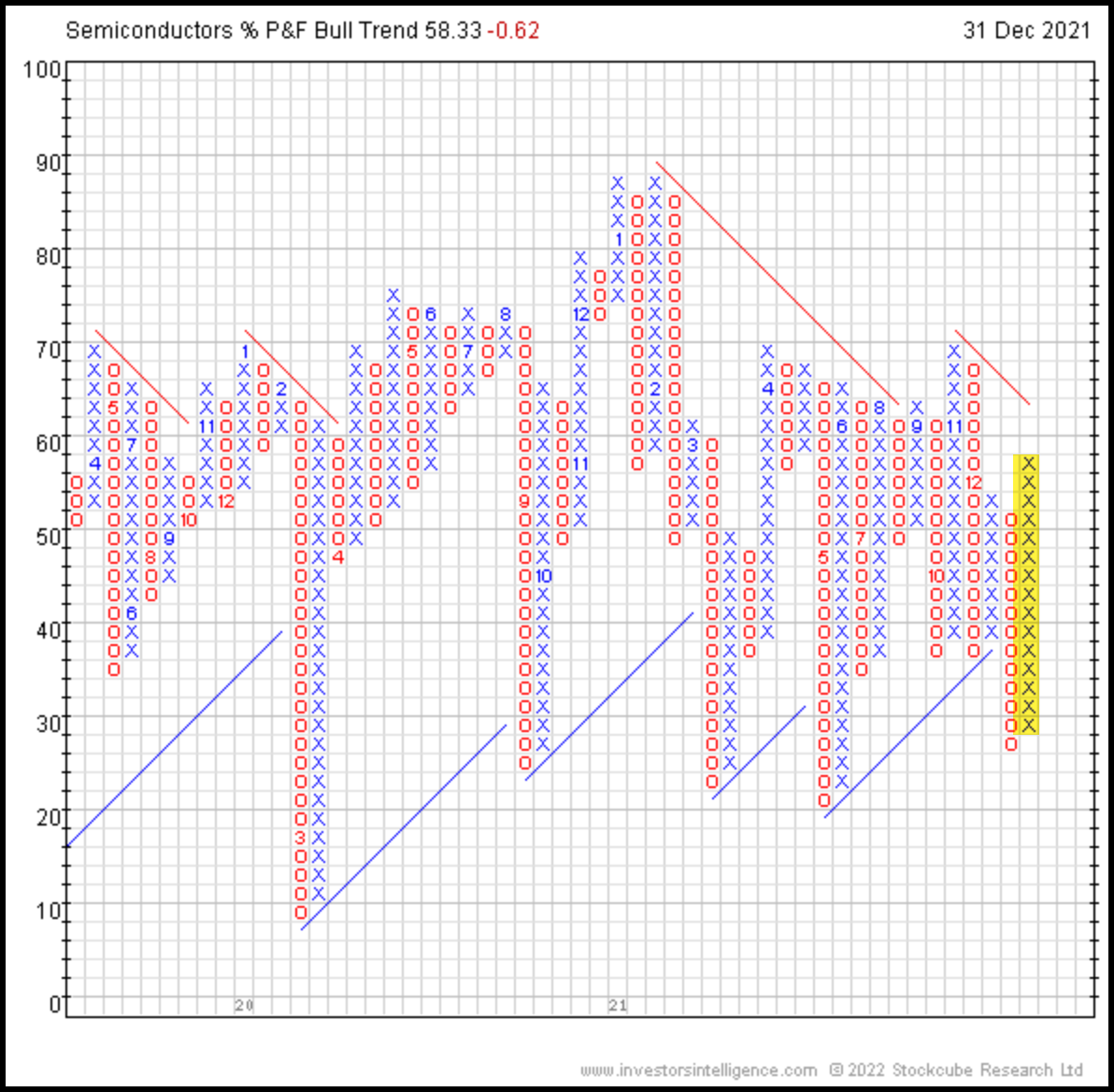 That tells us that Semiconductors should be considered strong over both the short- and longer-term.

The sector is outperforming the wider market (the Equally Weighted S&P 500). Its Relative Strength (RS) chart recently flipped from O's back into X's and the chart has been making higher highs and higher lows since August.

If the RS chart chart can fill an additional X-box, it will go on it's fifth Buy signal. 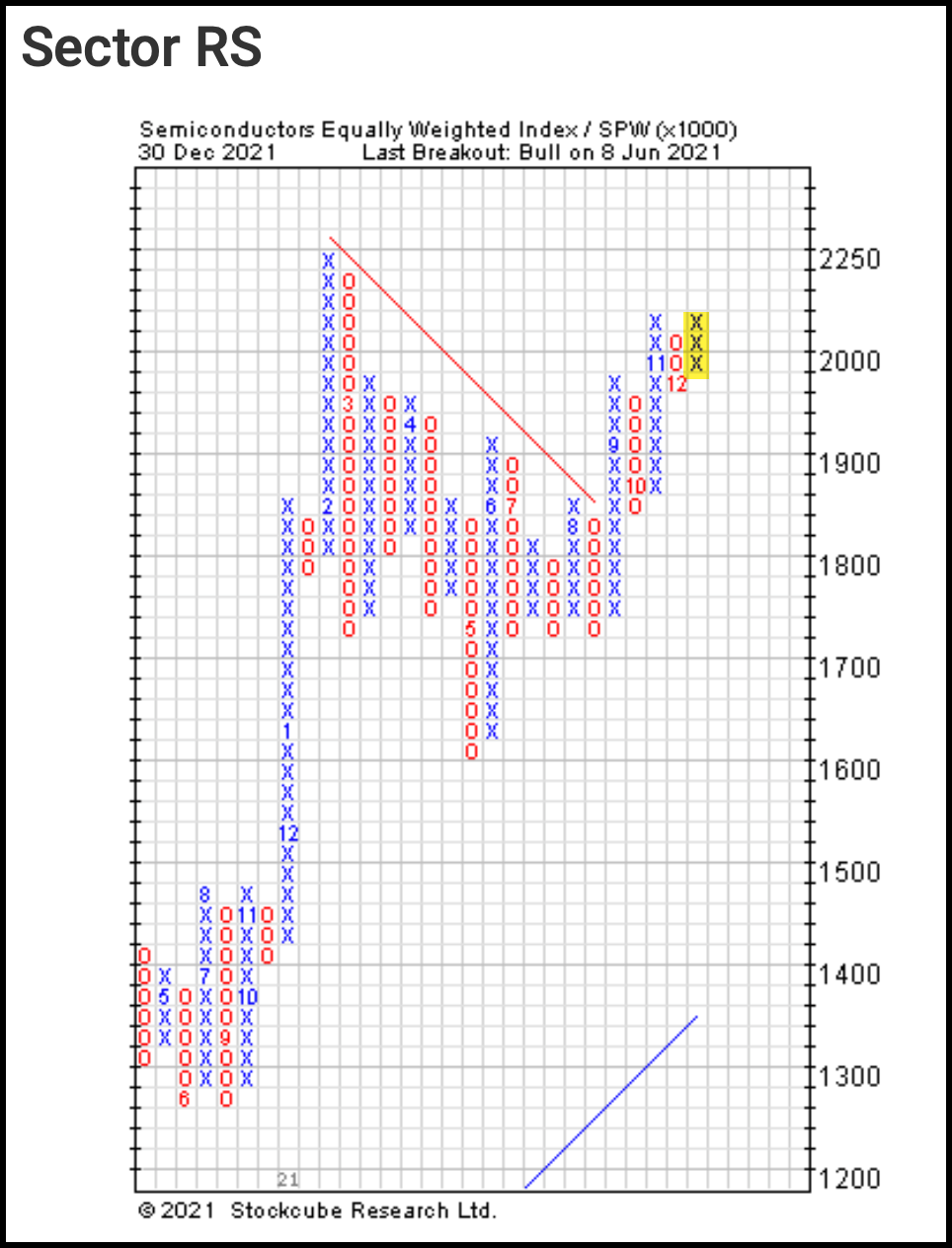 Now let's move from the sector to the stock...

If you've ever shopped for a computer or laptop, you know that 'RAM' is one of the key features you look for. The more RAM the better.

With an intellectual property portfolio of more than 600 active patents and applications, Everspin leads the market in development of this critical technology.

What's so special about magneto resistive RAM? Well, certain industries and uses require that RAM be much faster, more stable and more secure than normal. Everspin's MRAM fits the bill. 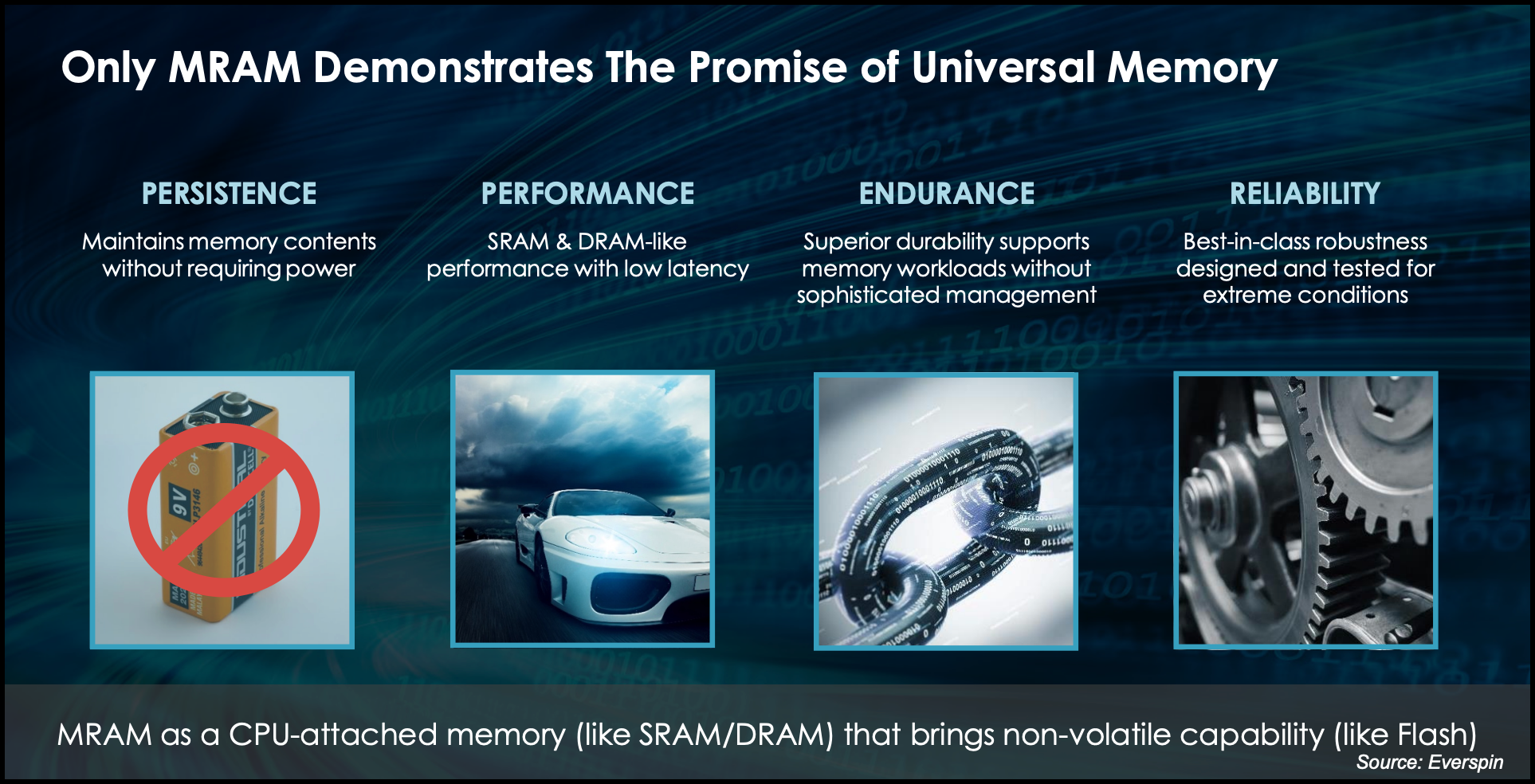 Everspin has over 120 million of its  MRAM-type  products deployed in data center, cloud storage, energy, industrial, automotive, and transportation markets. That means this $221 million company has built the strongest and fastest-growing base of MRAM users on the planet.

Everspin’s product lines are driven by demand fields such as aerospace, robotics, 5G Wireless, the Internet-of-Things (IoT) and automotive. Lucid (LCID), a leading maker of electric vehicles is a lead customer).

The company also provides MRAM for medical ventilators, which as you know play a key role in COVID care.

All told, MRAM services a total addressable market (TAM) that's expected to reach $3.4 billion by the end of next year. 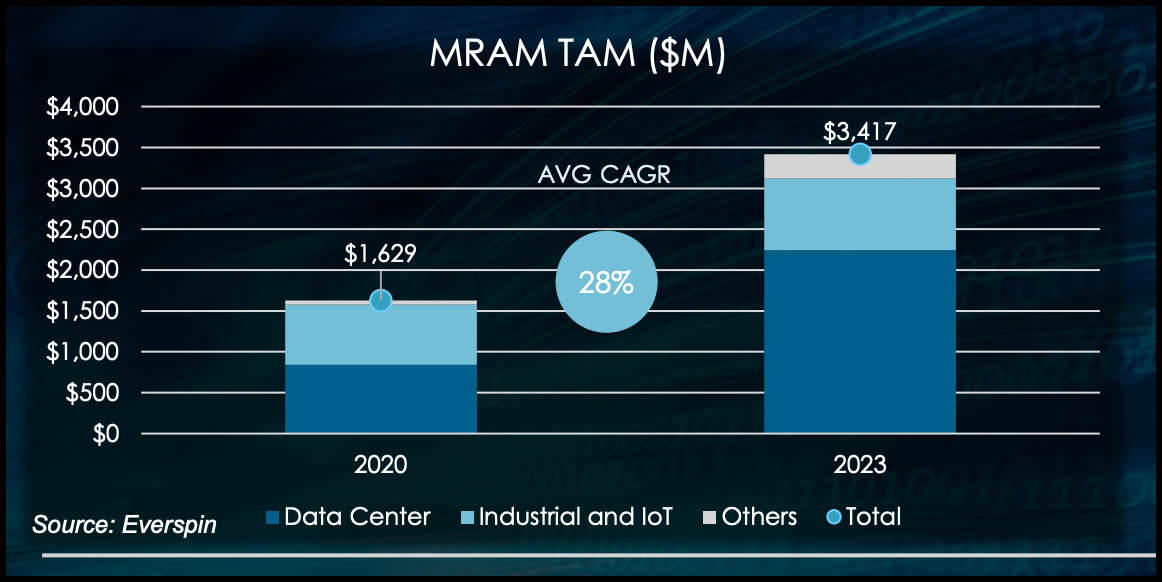 Everspin has been beating the pants off of Wall Street earnings estimates for a solid year. 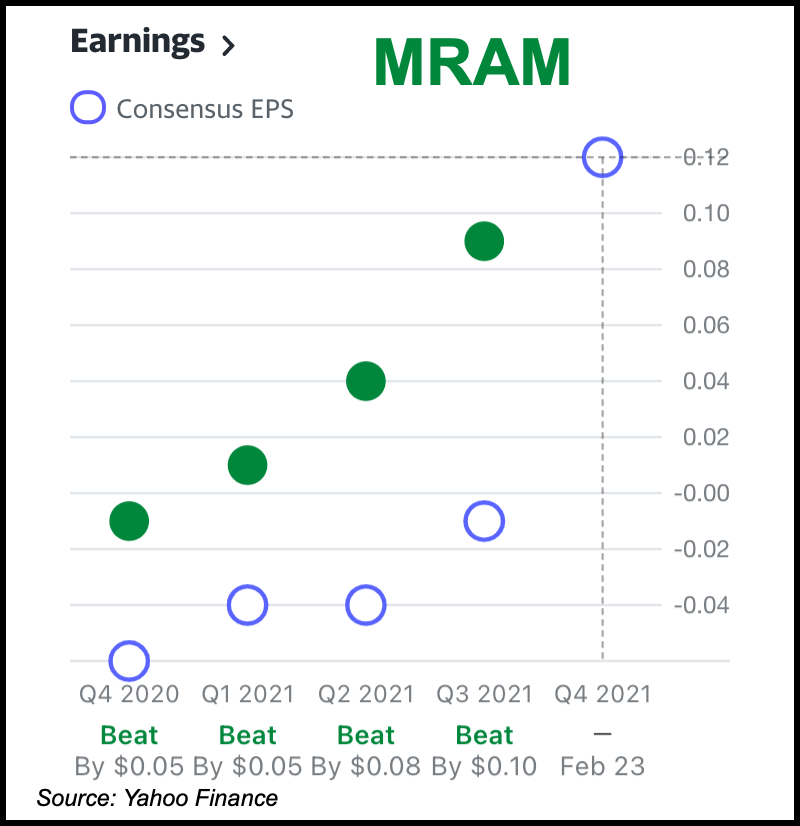 Over the past two quarters the company grew its earnings per share (EPS) by 150% and 119% respectively.

In its most recent quarter it grew its revenue 46%.

The big hedge funds have begun increasing their purchases of the stock. In the second quarter of 2021 the institutions purchased $.909 million against $1.49 million sold. But in quarter three they upped their purchases to $1.12 million while selling just $.410 million. 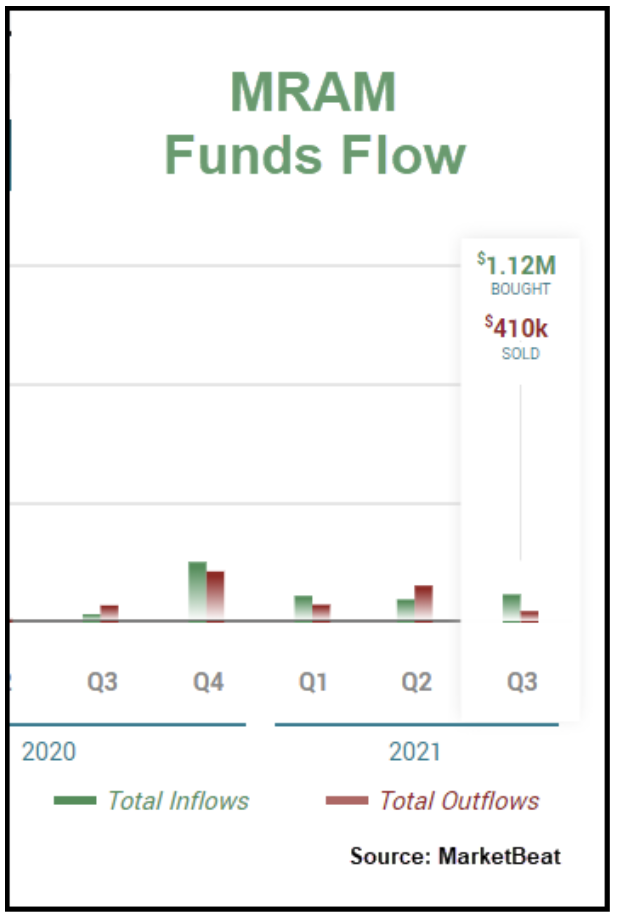 On its price chart below, the stock shows what's called a "flag formation." The "flagpole" is highlighted in yellow.

That giant blue volume spike shows where MRAM climbed that pole, springing up 102% beginning on November 12. The green arrow shows where the price, after pulling back from a high, held support at the 50-day moving average before resuming its upward momentum.

According to classic technical analysis, if a stock breaks out from a flag formation, you can expect it to gain an amount nearly equal to the size of the pole.

That would suggest that MRAM could gain as much as 102%, which of course uncertain. What is more certain is that right now MRAM is undervalued in the market.

Were MRAM to trade with a similar P/E multiple, the stock's price would be close to $16. That would give us a return of nearly 42%.

Buckle up for another year in the world's greatest arena -- the stock market!