Thanks for stopping by for this “Cyber Monday” edition of “Micro-Cap Monday.”

On November 1, Laurie Roop we looked at the P/S and P/E ratios that we find on a company’s Statement of Operations.

Today, she’ll explore the two additional Fundamental ratios --  the P/B and D/E ratios. It's all part of our “Knowledge is Power and Profit” series

On Monday, October 25, we talked about Four Numbers That You Should Know Like The Back of Your Hand.

Those numbers are truly important because they deal not only with a company’s financial health, but also its stock’s performance in the marketplace.

The four numbers are all ratios:

Once you determine those four ratios for your favorite stock, you’ll want to compare your stock’s performance to others in the same industry segment.

P/B and D/E are derived from the company’s Balance Sheet, which gives an accounting of what the company owns, (its assets) and what it owes, (its liabilities).

Assets and liabilities appear in any discussion of a company’s Book Value.

An easy way to think of book value is that it’s the final value shareholders would receive if the company were sold -- all its assets minus all its liabilities.

When we compare a stock’s per share Price to its Book Value, that’s called the “P/B ratio.”

How do you compute a P/B ratio?

And when we compare book values to share prices, we’re really looking to see if a stock is being fairly valued according to its strength of assets, liabilities and thirdly, its ability to generate income for shareholders.

In order to effectively interpret the P/B ratio of your stock, you’ll need to find a reliable average P/B ratio for the sector, or industry group your stock belongs to.

To do that, I always turn to the online NYU Stern School of Business’s (NYU Stern). There, I find tables of 94 industry groups broken into various studies.

In this case, we’re looking at the NYU Stern’s P/B Ratios. 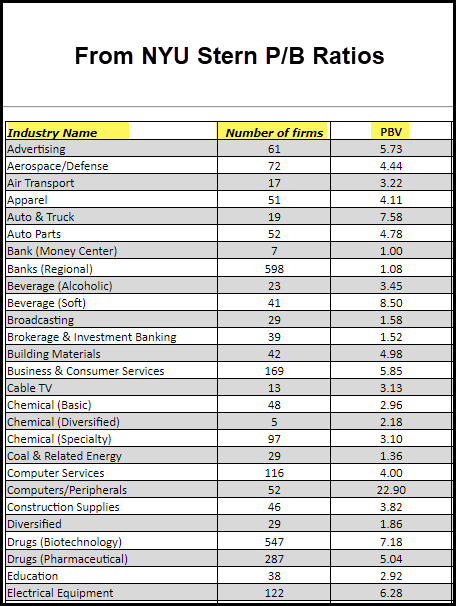 As you can see highlighted above, the industry groups are easily located in alphabetical order. You can see the number of firms included in each sector group, as well as the average “PBV” or (Price-to-Book Value) or P/B ratio.

If your stock’s P/B ratio is trading below its industry average PBV that can indicate that the stock may be undervalued.

It’s important to note that in some industries, Book Value is more meaningful than in others.

Generally speaking, P/B ratios are most accurately used when comparing very mature businesses, which you may not often see among the micro-caps.

But, it’s important to note that the businesses where P/B ratios are relied upon more often include heavily weighted assets, like capital equipment in industrial-type businesses such as manufacturing or even heavy construction.

You’d likely want to overlook P/B ratios when looking at a consulting company or those in the Internet or Software sectors, as those industries rely most heavily on intangible assets.

Now, we just said that Book Value represents what a company owns versus what it owes.

So, let’s reverse that view, and look closer at what a company owes, its debt, versus what it owns, its assets or equity.

In order to quickly index those figures of what a company owes versus what it owns, we look at a company’s Debt compared to its Equity — It’s D/E ratio.

You calculate the D/E Ratio by dividing Total Liabilities by Total Shareholders’ Equity. 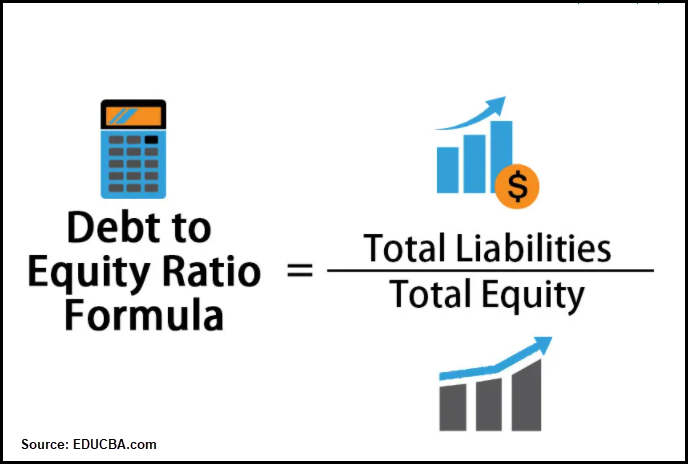 This study is particularly important because it gives us an estimate of a company’s future ability to survive.

Generally speaking, when a company acquires too much debt in comparison to its assets, and more importantly, its ability to make timely payments in order to “service” that debt, it may be flirting with disaster.

Long-term debt usually carries a higher impact on a company’s health. That’s because longer term debt obligations are usually much larger than short term debts, and they’re usually paid off over longer terms ranging five to 20 or more years.

With D/E ratios, there are three general keys to look out for.

Firstly, in general terms, a reasonable D/E ratio should stay well below 2.0, and even as low as 1.0.

But, that can vary by industry segment.

As examples, members of the Banks sector, the Utilities and other groups from the broad Consumer Non Cyclical sector often carry higher D/E ratios.

Those industry groups usually represent very slow, but remarkably stable growth. They can leverage or borrow very cheaply and know that they can make consistent payments over very long periods of time.

It’s also important to remember that as companies are undergoing emerging growth, our favorite feature in micro-cap stocks, they may acquire a little more debt in order to better “leverage” or finance their higher growth periods.

There’s nothing wrong with leveraging, provided the company can service its debt or, better yet, pay it off in large chunks.

And that can happen when the company brings in higher sales and positive earnings, through its high growth that was financed by the debt it acquired.

That brings us to the second key to D/E ratios.

If you have a company with very large cash and total assets, but nearly zero liabilities (debt), and if that company isn’t growing, that may not be a good sign.

It could indicate that management isn’t making good use of its ability to leverage for greater growth.

In other words, the healthy use of leverage is a good thing.

The third key to watch out for is a company with a negative D/E ratio.

A negative D/E ratio indicates that the company holds no shareholder equity. That is, its liabilities are greater than its assets. And that, my friend, suggests a very risky situation that could be headed for bankruptcy.

All things being equal, when comparing two stocks of the same industry segment, with similar P/S ratios and even P/E ratios, the one with a lower D/E ratio is probably the better choice.

Finally, remember that the study of ratios in fundamental analysis is only one part of your total analyses.

You’ll want to bring in technical analysis, as well, before pulling the trigger on a trade.

But, ratios are certainly key guideposts to making well-informed and wiser choices.

And with that, I wish you great success in your path to gaining greater knowledge and profit in investing.