Thanks for stopping by.

While it might be true that “not all that glitters is gold….”

The fact is that gold itself does glitter, and certain gold stocks glitter as well.

This year, one gold (and silver) exploration company muscled its way through an initial listing on the Over-The-Counter Pinks...

... to a fully reporting OTCQB listing.

And since its trading opened in February, this mighty micro has gained over 100% a month. That’s a phenomenal clip. Year-to-date, it has shot up 884%.

Propelled by a powerhouse management team… Plus strong sector tailwinds... This stock could move another +162% — at least.

More about this glittering ticker in a moment. First, here’s what happened in the markets this week.

Compared to the previous week when all the major indices made notable gains...

All Major Indices Are Down 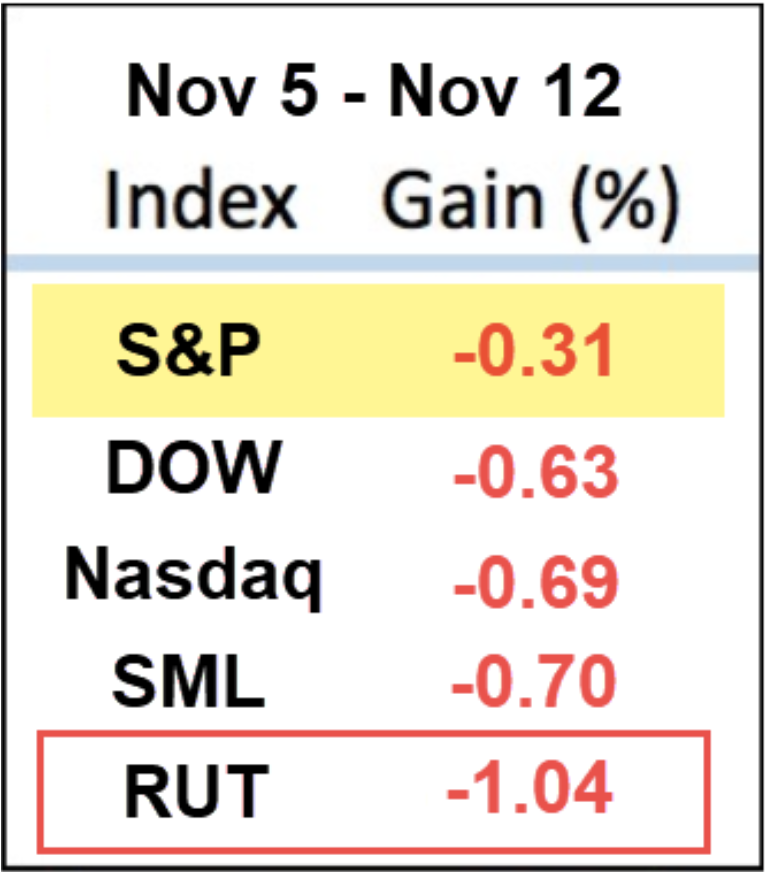 Let's look at the ‘true market’ internal view by using one of our Sector Prophets Pro tools, the US Industry Bell Curve.

The image above was generated after the close on Friday, November 12. You can see that the Curve shows mostly blue boxes, or sectors.

This Sector Is In the Hands of the Bulls

As of Wednesday, November 10, the sector’s Bullish Percent Index (BPI) chart is in a current column of ascending X’s which tells us the Demand is in control of this sector over the short term.

Also, that X-column has gotten higher than the previous X-column. That tells us that Demand is also in control over the intermediate to longer term.

The bottom line is that more and more stocks underlying the Precious Metals sector are moving to Buy signals on their own price charts -- a very bullish sign. 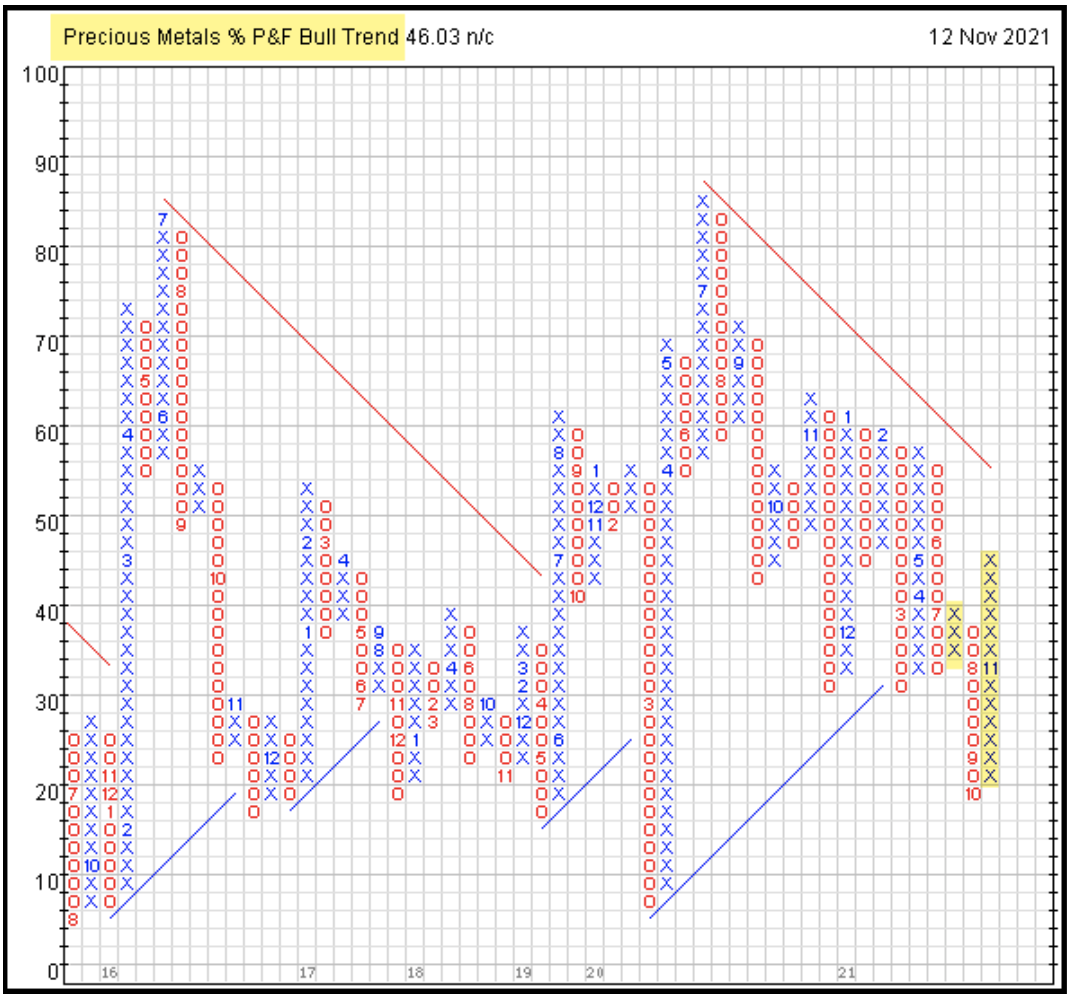 In fact, using another of our Sector Prophets Pro premium tools, the Sector Relative Strength Matrix, we can see that the Precious Metals sector is ranked #6 of the 45 sectors we monitor. That makes it stronger than the 39 other sectors. 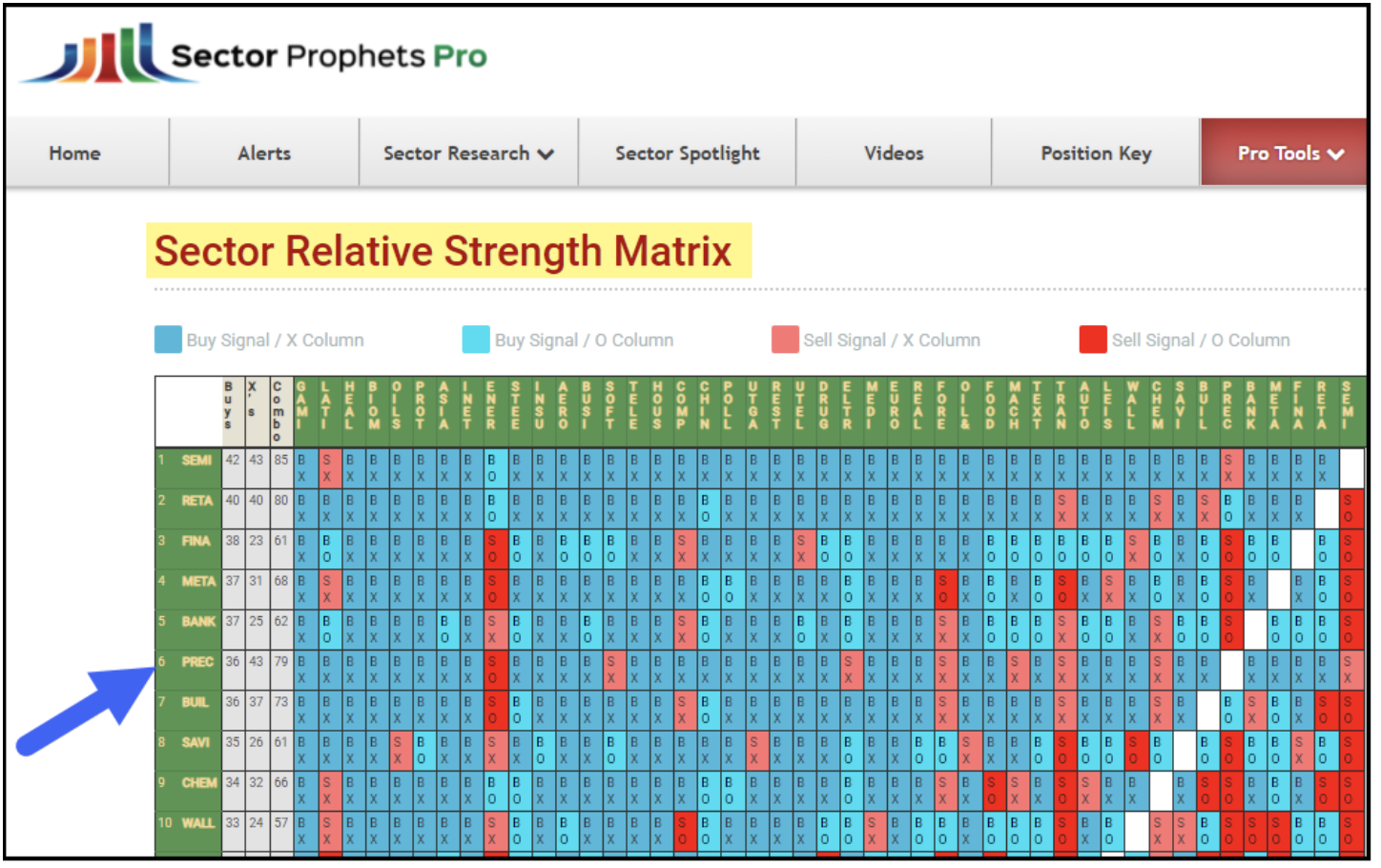 And one member of the Precious Metals sector is Colorado-based Fortitude Gold Corporation (OTCQB: FTCO).

Previously a subsidiary of Gold Resource Corporation (NYSE/AMEX: GORO), Fortitude was spun-off on December 31, 2020. Incorporated in 2020, and now operating on its own, Fortitude is still a new junior gold and silver exploration, mining and production company.

The company is led by management who previously directed Gold Resource’s production for a decade (guiding over $1 billion in revenue with nine consecutive years of profitability and $115 million in dividends).

This gold producer’s mission is to target projects with low operating costs, so as to produce strong returns on capital with high margins. But, it also works to grow organically, remain virtually debt-free, and enable the distribution of substantial dividends.

Fortitude closed on a private placement of $500,000 on January 11. Once its management team was in place, the company became fully reporting and was uplisted from the Pinks to the OTCQB, a much more orderly and vibrant market.

Fortitude’s first financial report, for its year ending December 2020 (pre-spin-off), was made on March 24. Then, the company reported $10.2 million net income, or $0.48 earnings per share on $54 million in sales.

Not a full month later, Fortitude increased its dividend to $0.36. CEO Jason Reid told investors, “We believe that earnings are opinion, cash is fact.”

By the time Fortitude announced its third quarter on November 2, the company had raised its full year gold recovery outlook to a full 45,000 ounces.

At the end of its first nine months, Fortitude produced 37,593 ounces of gold at an average cost of $574/ounce after by products credit, and $596/ounce before the credit. That was nearly a 66% reduction in production cost versus its 2020 results.

At the end of its first nine months, the company produced revenues of $67 million and  EPS of $0.64.

Despite Fortitude’s continued development of its gold bearing properties, the company closed the third quarter with a very healthy balance sheet, including a $44.3 million cash position. That was up 25.8% from its first quarter.

As mentioned earlier, FTCO opened trading at $0.75 on February 19. It closed that trading session at $3.19.

After making a strong uptrend since its third quarter earnings release on November 2, FTCO is trading well above its 20- and 50-day Moving Averages.

Currently, FTCO is trading at only 1.94 times sales.

For the Precious Metals industry, the NY University Stern School of Business (Stern) lists an average P/S ratio of 4.64.

And FTCO is also trading with a trailing earnings multiple of 11.5.

The Stern average trailing P/E ratio for the Metals and Mining group is 30.21.

So, either way we look at this mighty micro-cap, it’s undervalued among its sector peers.

If it were merely trading according to its industry average sales multiple, it would be at $10.76.

The company owns proven gold reserves... enjoys stellar management... and holds a very strong balance sheet, and is able to produce from its own cash.

The Precious Metals sector is strong on both a short- and longer-term basis. That makes for a very strong tailwind further propelling FTCO.

Plus, for interested investors, the stock offers a nifty 6.5% dividend. But hurry, the ex-dividend date is Wednesday, November 18.

Here’s to your “glittering” investment success.