Skimming Profits Off The Infrastructure Bill

I want to start by acknowledging all our veterans. Thank you so much for your service! Happy Veterans Day!

Government contractors across the country are pulling on their construction gloves in anticipation of the work to come from the $1.2 trillion national infrastructure package just passed by Congress.

(Not up to reading? Watch the video version, below, instead.)

Companies that represent stocks in the Industrials and Basic Materials broad sectors live for moments like this.

That’s true for traders too! The “Calls” really couldn’t get any easier.

The amount of business coming to these companies means everything to their future stock price. 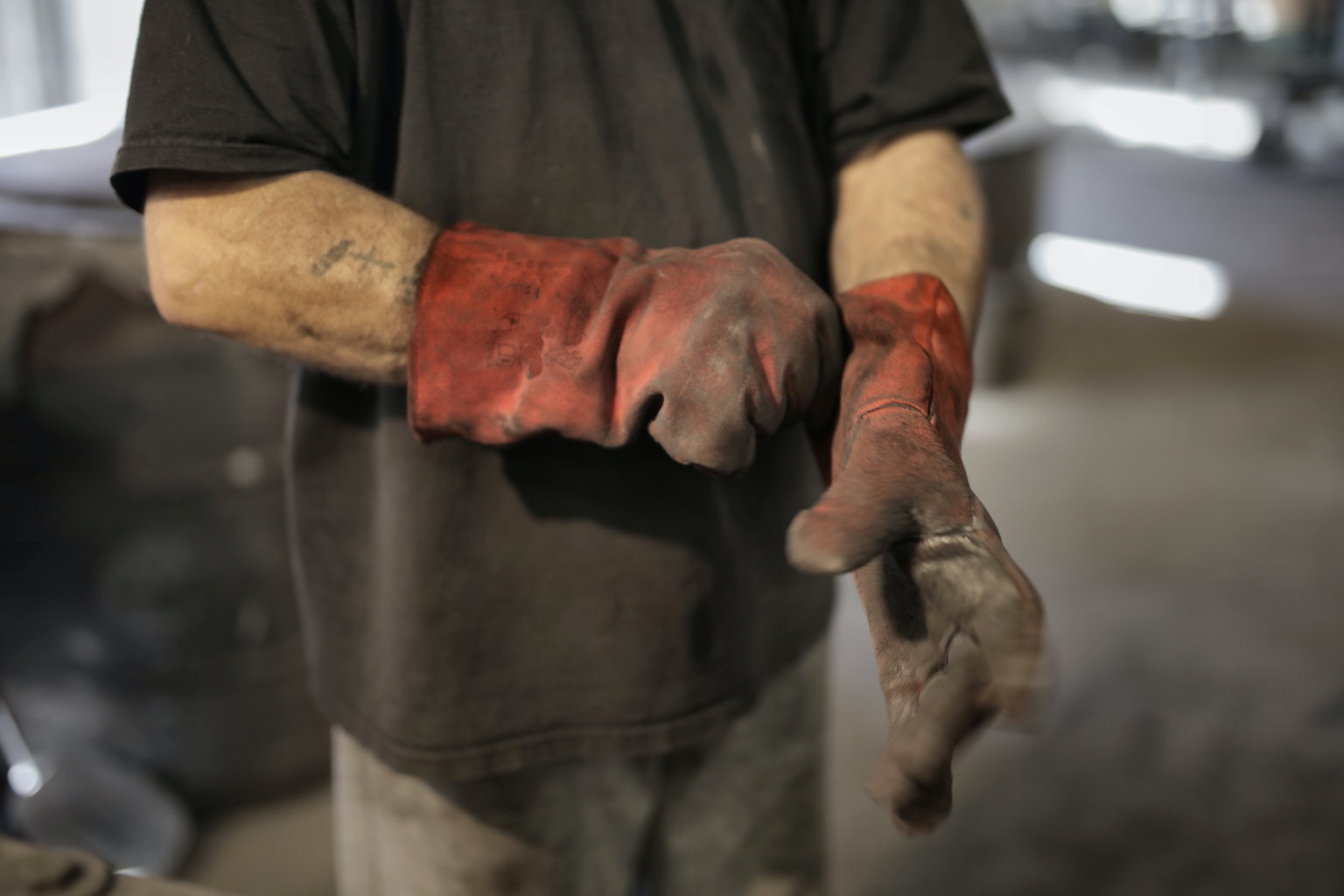 Just look at some of the monetary allocations to the different projects for the infrastructure deal:

✅ $66 billion in passenger and freight rail

✅ $25 billion in airports to address repairs

✅ $65 billion to rebuild the electric grid

And you can see below, the Metals Non Ferrous sector in position #7 on the Sector Relative Strength Matrix. 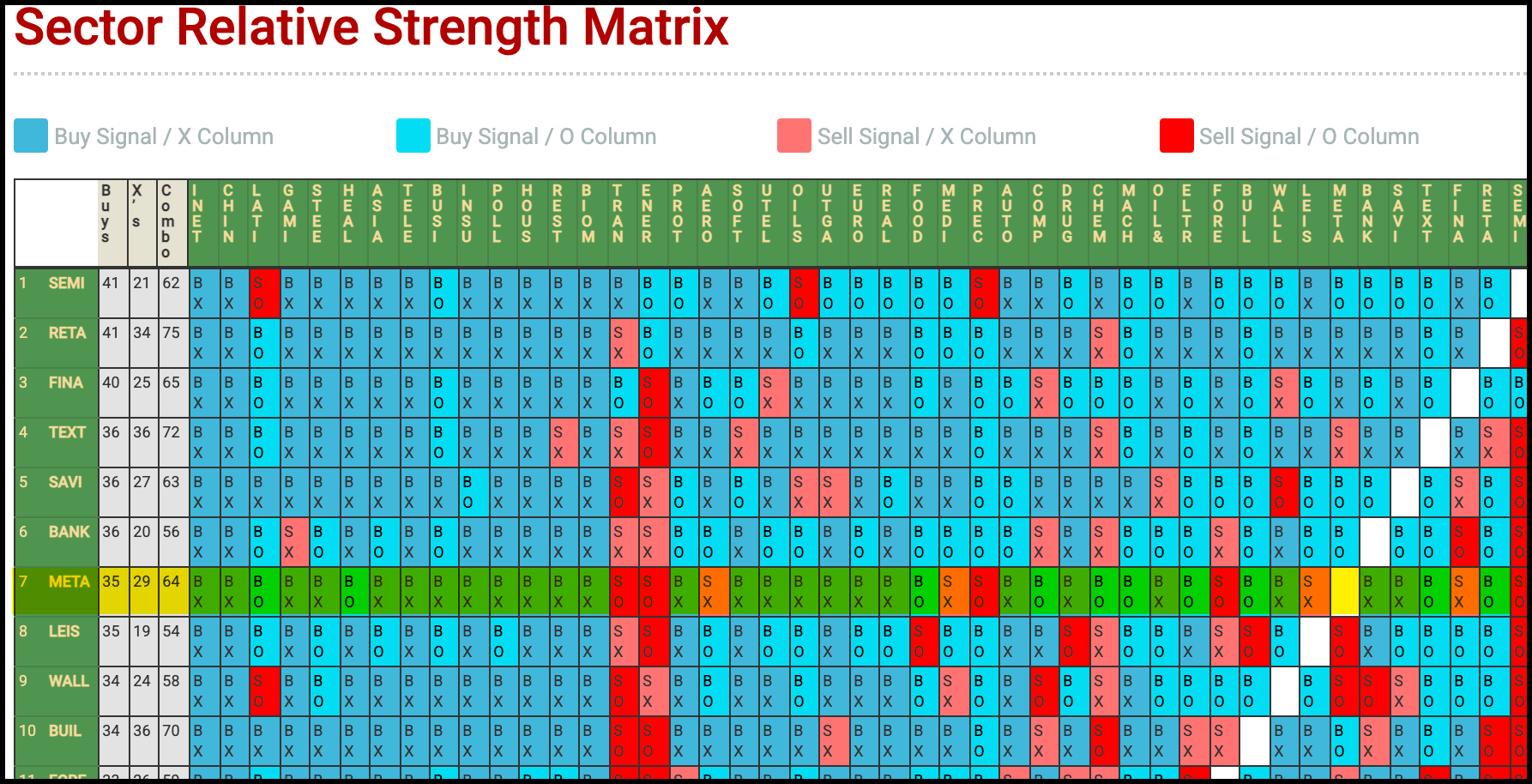 Now take a look at the Metals Non Ferrous Sector Relative Strength Ranking History below. Notice how it’s surged upward since September in anticipation of the infrastructure bill. 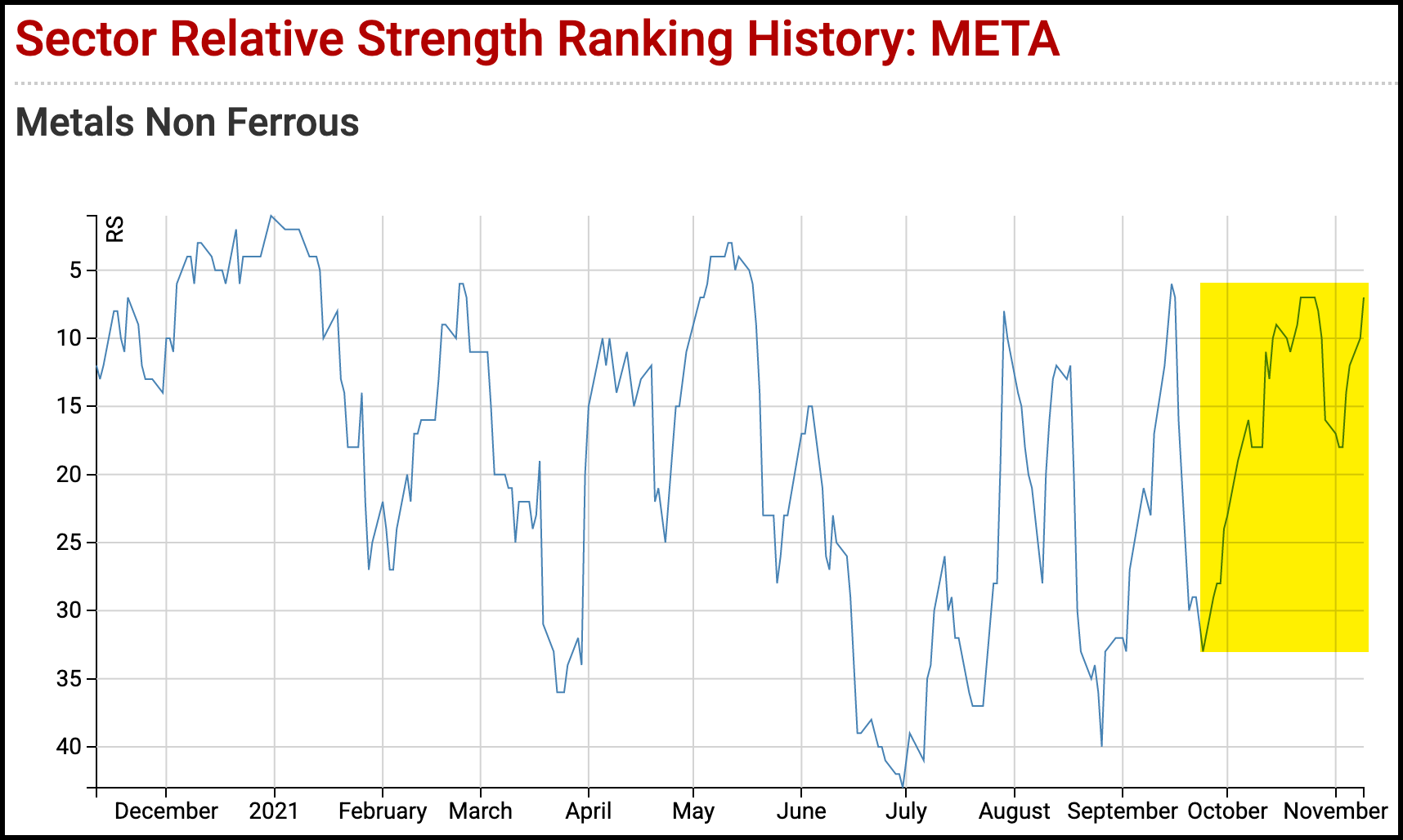 So, while companies like Alcoa Corporation (AA) and Nucor Corporation (NUE) get busy making the coming infrastructure buildout a reality, by providing the materials for all those bridges and trains, we’re gonna keep building investment portfolios.

Many of the companies we can capitalize on are already on the move. That’s because government contractors are in a bidding war right now to land these contracts before they’re all gone.

So, the time is now for us to move as well. In fact, I’ve already started raking it in.

And I’m doing it with limited risk.

For example, I launched Profit Skimmer more than 10 years ago.

My Profit Skimmer readers have been wringing out profits all year long using my signature vertical spread strategy.

And we’ve been extracting profits left and right during the lead-up to the passage of the bill. Profit Skimmer will likely be a hotspot for wringing profits out of these companies moving forward.

We’ve already booked a fat juicy skim in a Nucor (NUE) Bull Call spread. My readers were able to book gains of +47% or greater on a recommended trade that we closed in August. 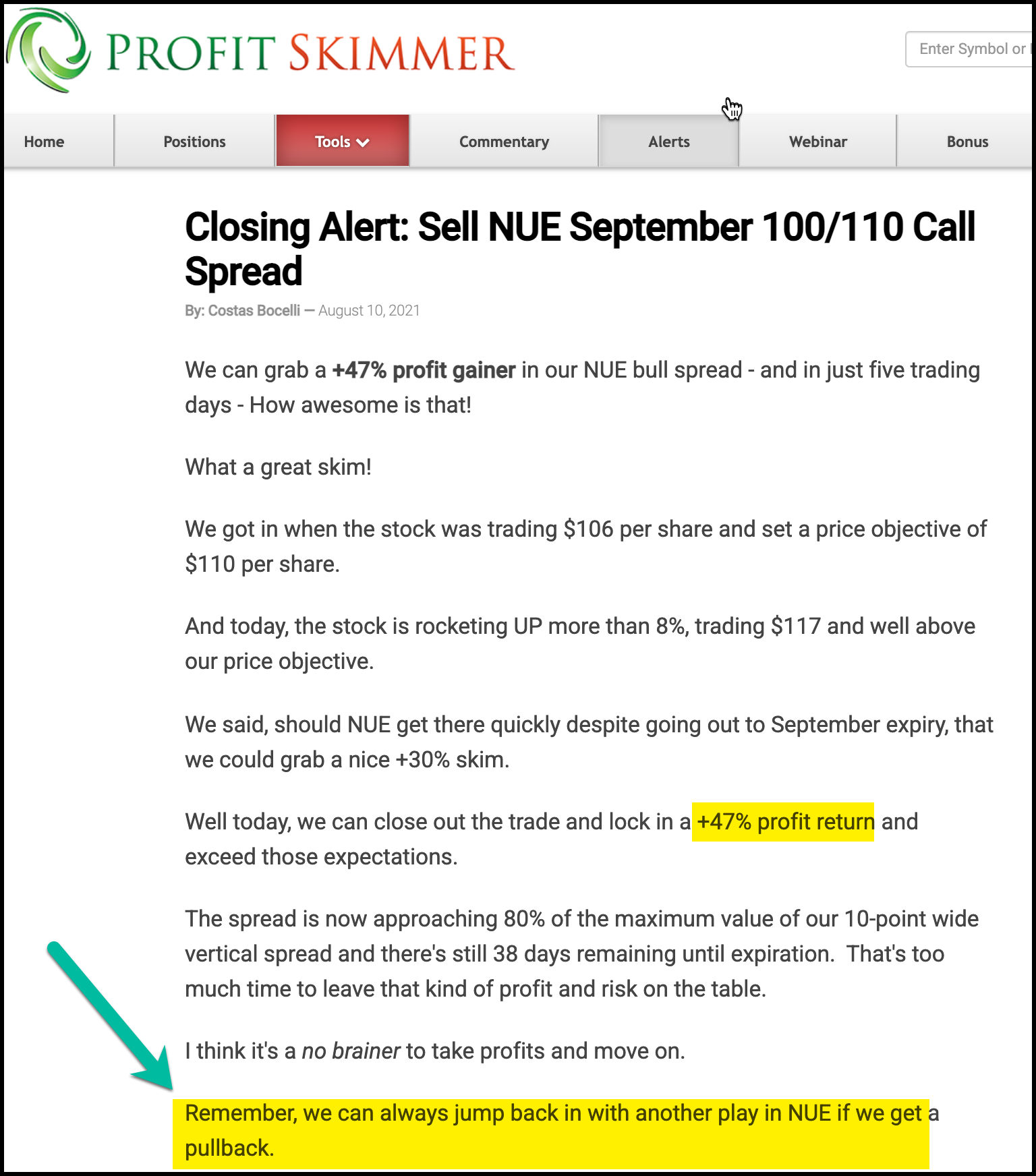 You can see highlighted in yellow in the above image that I suggested to my readers that there may be another opportunity in NUE if we saw a pullback.

It was a different trade, but with an even better result. My readers were able to extract +75% profit gains or more when I sent out the closing alert in late-October.

AND IN 2 WEEKS TIME. Fantastic, isn’t it?

I recently told my readers that a bullish skim is setting up in Alcoa Corporation (AA). I recommended another option spread that can generate a profit return of +178%.

The trade is already up +20%. But I think there’s plenty more gains to come in this one.

My signature Profit Skimmer strategy is perfect for individual investors because every trade is fully hedged with risk defined on every trade.

You can even bet against stocks and profit from bearish trades. We’ve been doing that as well

Like the The Walt Disney Company (DIS) bear spread I recommended in September.

We ended up taking that trade off in October and my readers were able to generate a profit of +65% or more by betting against Mickey Mouse. How awesome is that? 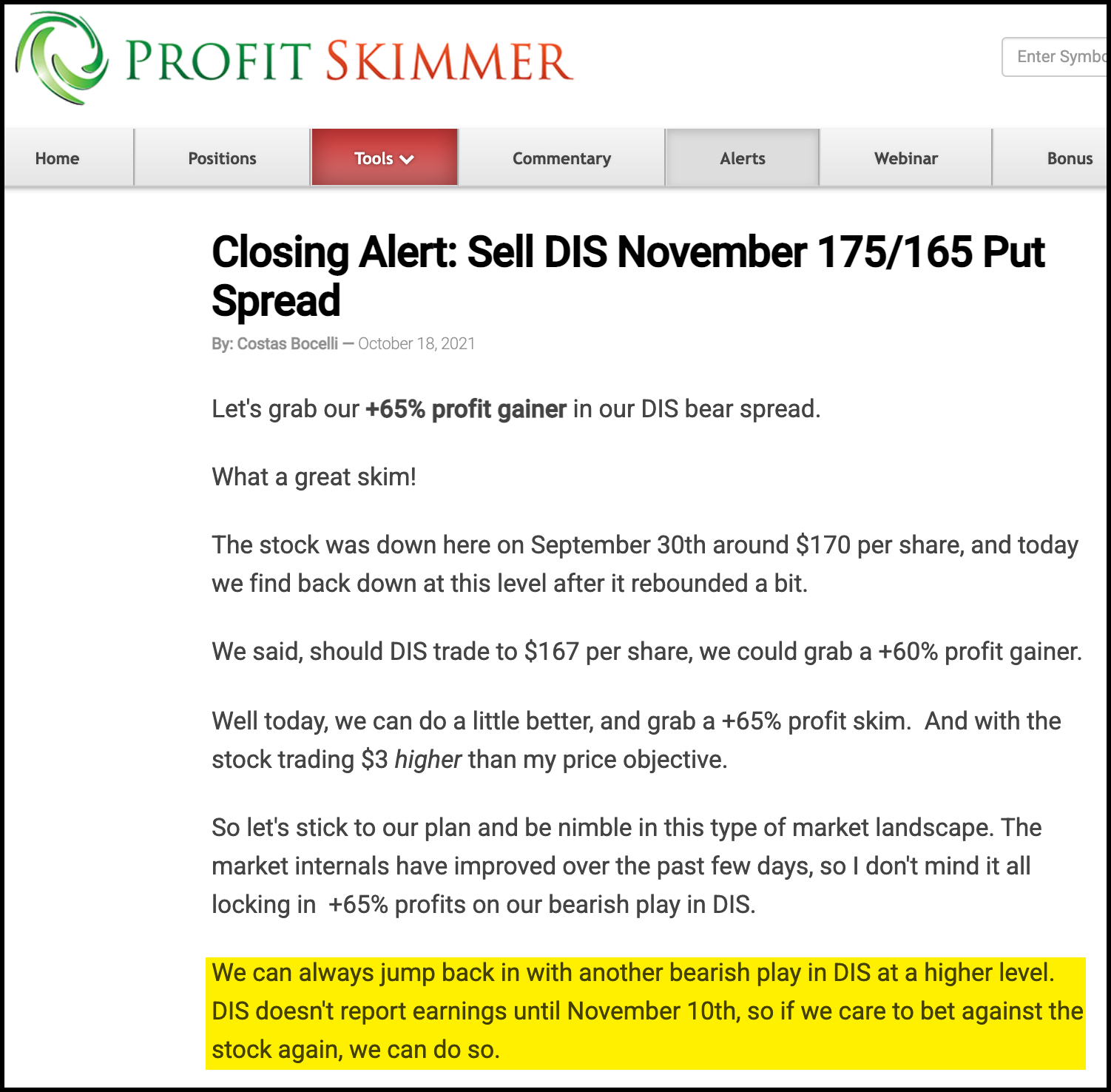 One of my readers told me that she made enough profit on that trade that she’s taking her family on a trip to Disney World during the upcoming school fall break! Hahaha!

And the best part is… Option investing has never been better than it is right now.

Volume continues to grow and commissions and fees have been slashed to ZERO by many of the leading on-line brokerages.

If you’re not taking advantage of all the benefits of options, you’re doing yourself a huge disservice

When I pull the trigger, my readers get a text notification and an email alert with clear and simple instructions on how to get in on the action.

Got Profit Skimmer? You Should! 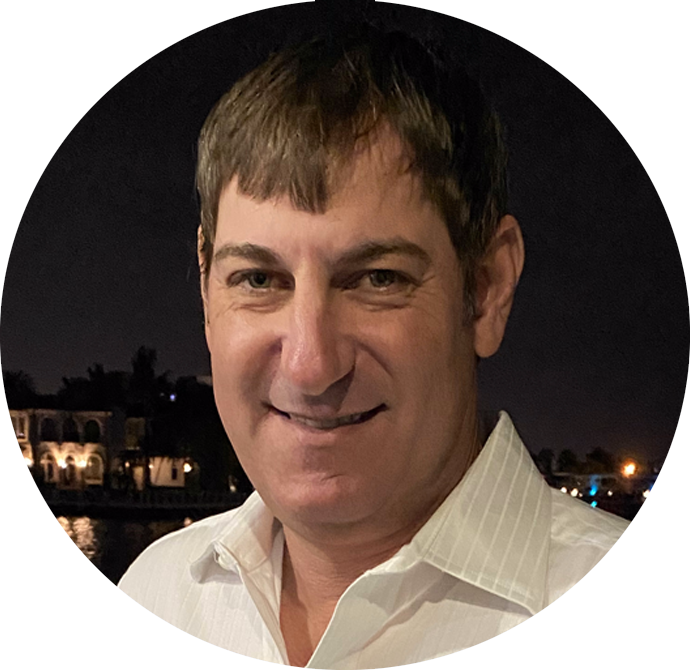