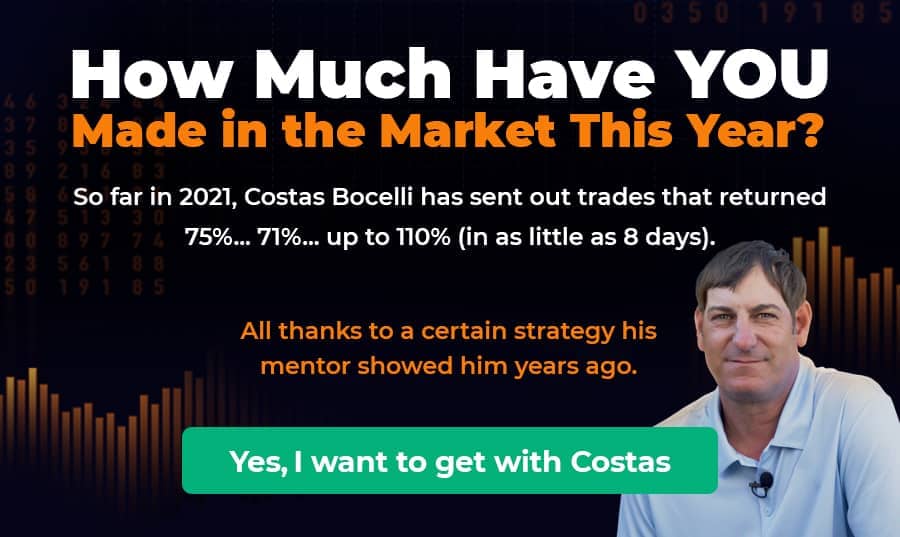 Thanks for joining me on this first Monday in June.

The summer season is in full swing, and so, it seems, is the gaming world.

In the post-pandemic rush back to gaming houses, the world famous Nevada hotel casinos reopened to full capacity less than a week ago.

It’s going to be very interesting to see the kind of business these establishments do in the post-pandemic world.

I say that because last year, as coronavirus swept the globe, the online gaming industry outperformed even movies and sports as entertainment’s top dog.

And spurred by further growth across the industry, Research and Markets expects global gaming to nearly reach $300 billion by 2026, displaying a CAGR of 9.24%.

I’m not much of a gambler, I have to confess, I find slot machines (or “fruit machines” as our British cousins call them) to be downright addictive. 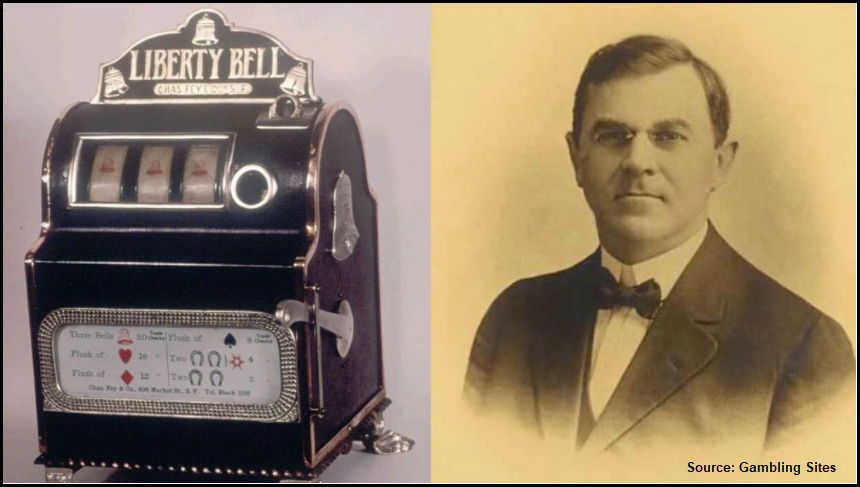 In fact, Forbes recently noted that that number tops 80% in Vegas casinos.

And based in Vegas, American Gaming System formed its roots in 2001 and was formally established in 2005.

Still in its publicly held youth, this company achieved its IPO only five years ago, and was uplisted to the NYSE in 2018.

Today, PlayAGS (NYSE: AGS) is one of the world’s leading gaming equipment suppliers. It serves the slot, gaming tables and interactive gaming segments.

The company also has entered a segment of the gaming market that’s grown nearly 500% in the last five years.

After several years of comprehensive research and development, and now coming out of its pandemic fueled slump, PlayAGS slashed its Q1 losses by nearly 200%.

In a moment I’ll show you how AGS could climb an additional 65%.

First, here’s a look at the U.S. stock market performance this week. 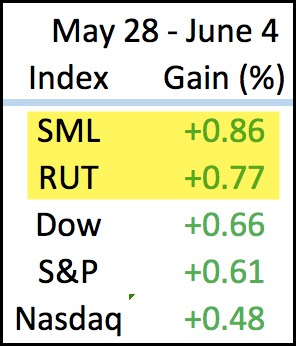 The tech heavy Nasdaq finished last, but it was still up +0.48%.

You can see a clearer picture of the U.S. stock market by looking at the “internal market,” which focuses on sectors and sector breadth.

To do that, we turn to a special tool we’ve designed, called the US Industry Bell Curve.

The image above was generated after the close on Friday, June 4, 2021.

And the Gaming sector happens to be one that the bulls control. In fact, it’s ranked #7 (lucky seven for the gamblers among us). That makes it stronger than 38 other sectors.

To illustrate that, we use another of our premium Sector Prophets Pro tools, the Sector Relative Strength Matrix. 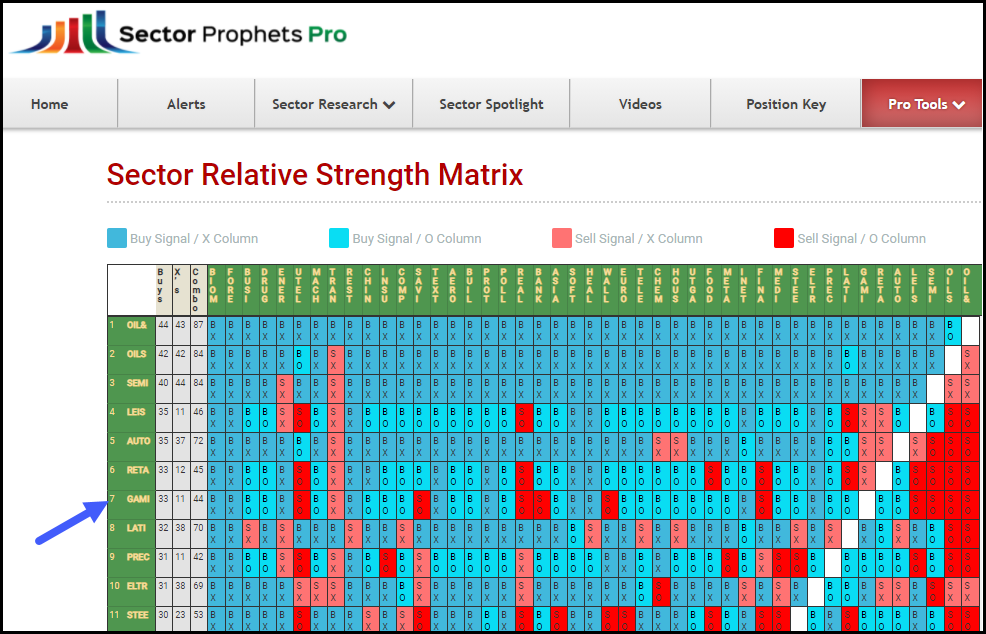 When we look at the Gaming sector’s Bullish Percent Index (BPI) chart, we see that it's in an ascending column of X's. That means the sector is showing short-term strength. 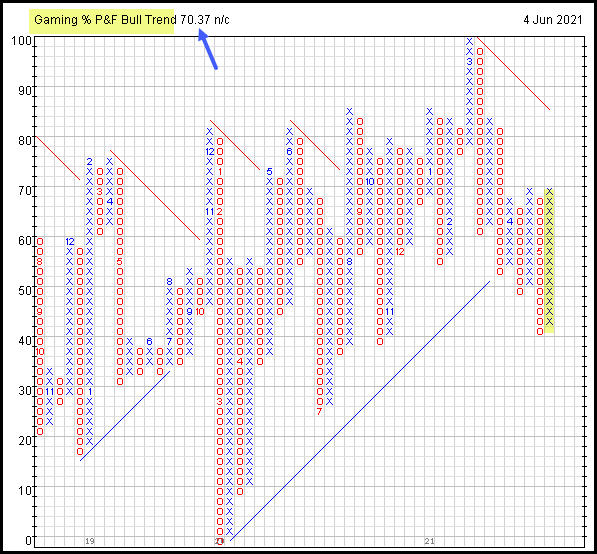 The BPI tells us the percentage of stocks within the sector that are currently on "Buy" signals on their own price charts.

The blue arrow at the upper left points to the exact percentage -- 70.37. So nearly three-quarter of stocks in this sector are on Buy signals.

This next chart shows the Gaming sector's performance as compared to the Equally Weighted S&P 500 Index. You can see it's in a rising column of X's. That means it’s increasingly outperforming the wider market. 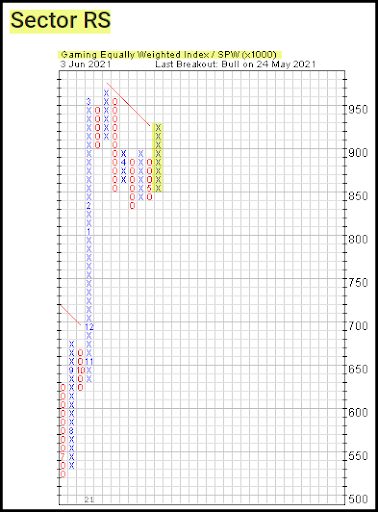 As mentioned earlier, AGS is one of the stocks riding the Gaming sector’s strength.

With a market capitalization of $375 million, AGS is a micro-cap stock. But we think its improved performance makes it a ‘mighty micro-cap,’ and here’s why:

AGS’s CEO, David Lopez, had this to say in the company’s Q1 earnings call. “Never underestimate the spirit of the gambler. Judging by our first quarter financial performance, the gambler spirit is alive and well.”

The company reported improvements in all three of its business segments.

Its domestic electronic gaming machine (EGM) revenue was up nearly 30% from its 2020 first quarter, and 17% from its fourth quarter ending December.

Its international EGM revenue didn’t perform quite as well, and probably due to the slower COVID recovery in some countries. Nevertheless, the segment still saw a 15% improvement over its fourth quarter.

AGS’s table gaming segment’s revenue was up 11% from its first quarter a year ago.

Yet, its interactive gaming segment saw a whopping 41% revenue improvement over its 2020 first quarter. Supported by that improved revenue performance, the segment also returned positive EBITDA for the fifth consecutive quarter.

Looking for ways to accelerate the pace of its post-pandemic EGM recovery, AGS has broadened its historical horse racing or HHR game presence, especially in Virginia and Kentucky.

The popularity of HHR slot machines is overwhelming. The Louisville, Kentucky-based Courier Journal said that betting on HHR slot machines has grown 463% in the last five years and will total approximately $3.6 billion this year.

Although management has yet to provide full year 2021 guidance, it anticipates “further and better than a modest improvement” in its upcoming second quarter results, and for the overall year.

In the chart below, we can see that AGS’s institutional ownership is back on the rise since 2020’s pandemic-fueled slump.

AGS is a bit of a chameleon, because it also competes in the miscellaneous manufacturing industry, where it's also an outperformer.

After falling from a July 2019 high of $21.59, AGS traded sideways until COVID. It then lost 93% of its value during the worst of the pandemic.

In the chart above, I've drawn the Fibonacci retracements from the pre-COVID high to the March 18 low -- the blue horizontal lines. I've highlighted one of them.

The lower series of six blue lines shows that AGS has retraced 100% of its pre-COVID decline and is finding resistance at the 100% Fibonacci ratio.

If the stock can penetrate above that level it should have a shot at the next Fibo level -- the 161.8%, highlighted in yellow and indicated by the blue arrows.

You can see how the 161.8% ratio corresponds perfectly to where the stock gapped down in 2019.

That was a previous level of support. You can see the stock bouncing off that highlighted yellow line before it gapped down.

It frequently finds support or resistance at or very near one of the blue horizontal lines.

Here’s a six-month view showing that when the stock moves higher, it tends to do so on heavy volume (the green arrows).

Although I’m not saying that AGS will move higher in precisely this way, as you’ve just seen, there are certainly sound reasons why it could.

Here’s to your investing success,