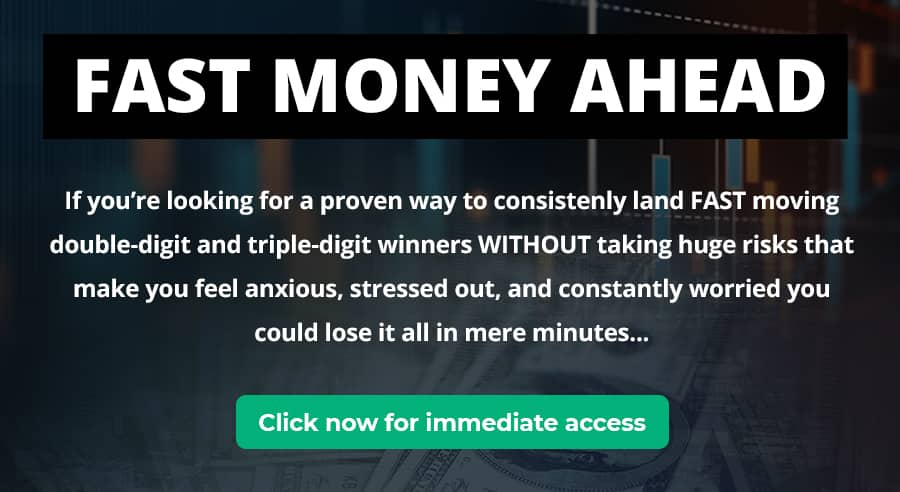 Hello and welcome to Micro-Cap Monday where we go big... by going small.

Today is Memorial Day. I'll be sending the afternoon in Whitestone, NY with family and friends.

That's much better than last year, when we all had to settle for an online get together thanks to COVID-19.

The column below ("In Praise of Heroes and Giants") was published the day before Memorial Day last year and attracted a fair amount of comment.

One email that stayed with me was this one, by a wonderful reader named Craig who said...

"Beautiful and moving message, Bill. Thank you for writing about your family heroes. Makes me stop and recall mine as well--my Dad was a Tar Heel, and I was born in 1945." ~ Craig C.

I hope you enjoy the article below. and I hope it brings to mind heroes of your own.

Thanks for stopping by...

Tomorrow is Memorial Day in the U.S. and the "lock down" is still in place (at least officially) here in New York City.

So for the first time in decades my friends and family won't gather around the barbecue.

Instead, this year we'll be holding a "Zoom-B-Q". We'll meet on the Zoom platform and raise a glass to heroes who have fallen in the service of our country.

And let me say -- If you happen not to be American, please know that you and your native heroes are included in our gratitude.

Heroes are heroes. Every nation has them and every nation is better for it.

If you are veteran, if you have served in any capacity -- Thank you for your service. You have our deepest gratitude.

But you don't have to fight in a war to be a hero, as the coronavirus has made clear.

Every minute of every day healthcare workers the world over stand at the viral perimeter and declare with steely eyes: None shall pass.

My family has heroes of its own, as perhaps yours does as well.

My nephew Wayne is the CEO of a very successful financial publishing company in New York. His paternal grandfather was a test pilot for the Air Force.

He met his end one foggy night in Houston in 1958 when a new jet he was flying crashed into some hills.

And I have a brother-in-law who is a 25-year veteran of the Coast Guard. These days he trains different agencies in emergency response.

Today's conversation is for and about another great and good man -- my grandfather and namesake. 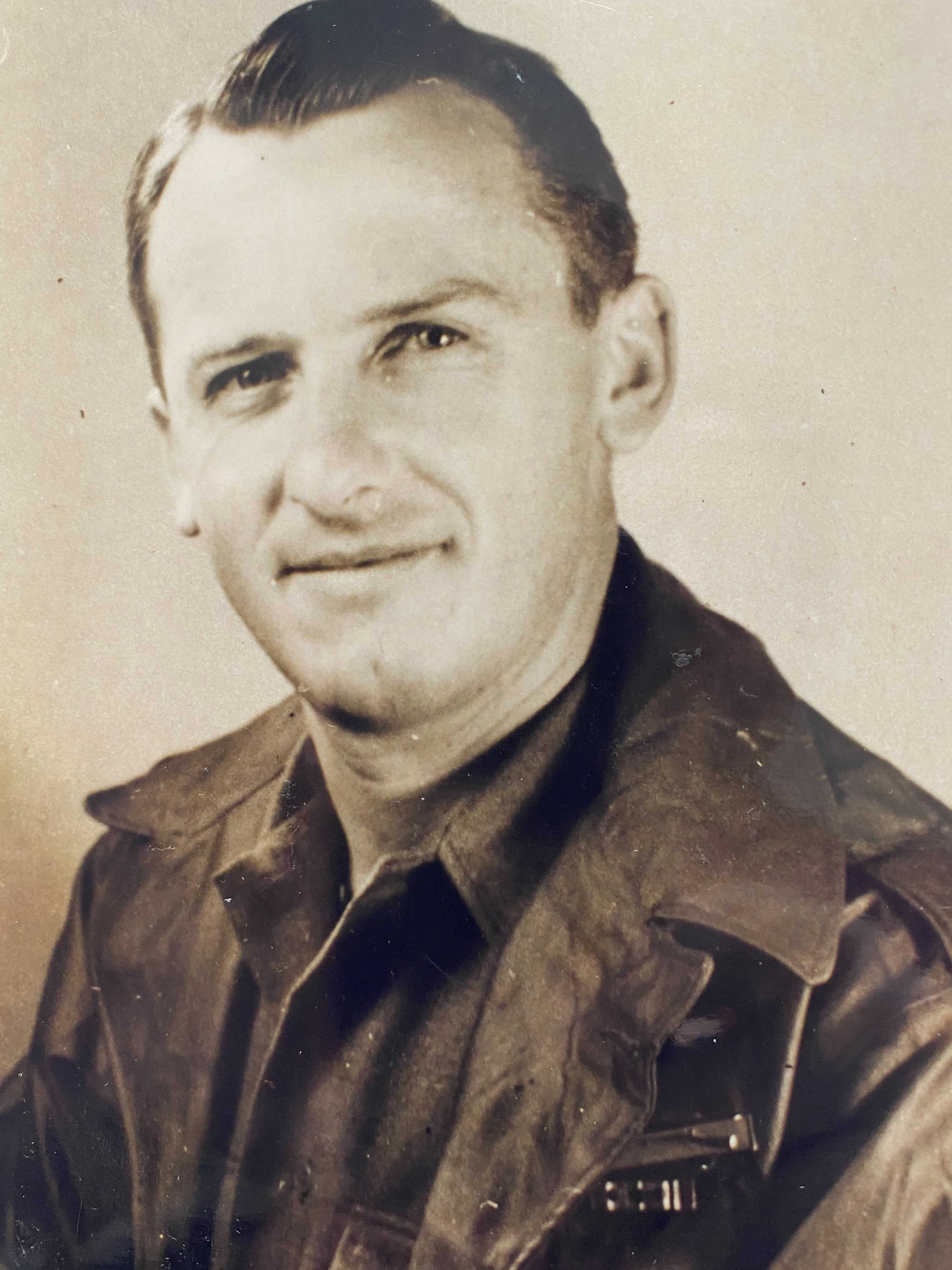 Like many Americans I'm a hybrid. My mother's family hails from Northern Italy...

... while the people on my father's side came from England by way of the Carolinas and (on his mother's side) from Eastern Europe.

I'm named after my Granddad on my father's side -- William Carl Spencer.

When America entered the Second World War, he was 33 years old with a wife and four children to support.

The great war had yet to pull the country free from the Great Depression, so Mason City Iowa was at that time a poor community of 28,080 souls.

Because of his age and because he had a family, Grandpa Spencer was never drafted, so he enlisted.

Friends tried to talk him out of it. He acted like he never heard their words.

He spent Christmas of 1944 in northeast France fighting with the 369 Engineer Company in the Battle of the Bulge.

He finished out the war with his infantry unit, but was killed in a freak train accident at Culmont-Chalindrey, France on October 24th, 1945 -- 187 days after VE-Day.

My Dad says Grandpa had a "wry" sense of humor, so I think he would have easily seen the irony in that.

He's buried with numberless others at the United States Military Cemetery at  Epinal, France. 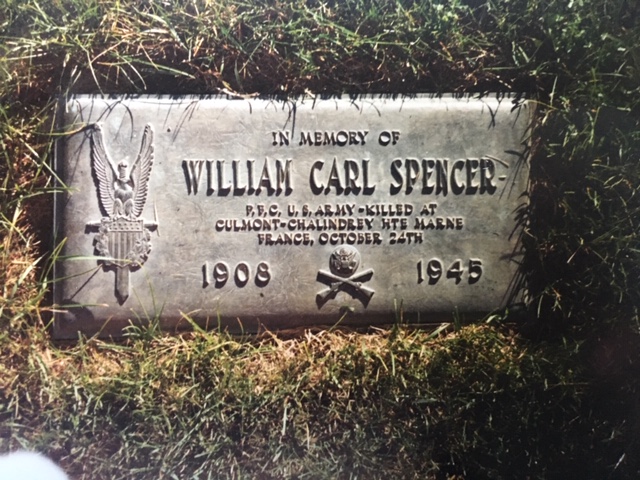 I have some letters my grandfather wrote to my Dad from overseas. Nowhere in them does he say where he's stationed. (Army censors would have blacked that information out anyway.)

What strikes me every time I read those letters is how ordinary his concerns appear... and yet how important he makes them feel.

There's nothing approaching braggadocio or macho or anything like that. He doesn't wax patriotic or vow to make the world safe for anything.

Instead, there's this quiet voice talking in simple, assured sentences to a 12-year old boy he calls "Tar Heel".

He writes about mundane things like studying hard and how important it is to complete homework on time.

He says he is very sorry to hear that "good old Dan's" wife is in the hospital.

At one point he writes, "Are you practicing your Clarinet?" Because "music is also a very fine career".

And he advises Tar Heel to "Make sure the bat is level when you swing. I don't have to tell you that ball players get paid a lot of nickels for getting base hits", and that one should "never grandstand or try to show off for the crowd".

He reminds my father to "Help your Mom around the house" and to "Take care of your sisters".

In other words -- keep your eye on the ball and look after the things that really matter. The things that these annoying World Wars have an uncouth way of interrupting.

And more than once he promises, "I'll be home soon." And "We'll all be together".

My Grandfather never won any medals. I have no way of knowing if he ever performed any feats that would have earned him one.

I never got to ask why he left home to fight in the snows of Europe. He didn't have to after all. At his age and with his responsibilities no-one would have thought him a slacker, or worse.

Was it a sense of simple duty? Was it just that that's what a man did? Did he feel the weight of that moment in history?

But there's something in the tone of those letters...

Something in those simple cursive sentences, pages of them, that make driving in a run or walking a little sister to school feel like they carry all the weight of the world.

I think those letters reveal my Granddad's deepest motivation.

He didn't fight to make the world safe for democracy or any other high ideal. He fought so boys could play baseball and play the clarinet (and enjoy the opportunity to make "a lot of nickels" doing it).

I think he was personally offended that the schemes of some tinpot Hitler would dare infringe upon any of those things. (To win what? World domination? Who needs that?)

I'm so damn proud my grandfather took offense and went on the offensive.

And I'm so grateful so many other ordinary people take offense when bad actors threaten good things.

And that every last Monday in May we set a day aside for him and his kind. The quiet men and women willing to stand at whatever perimeters there are and say to any would-be aggressors: Don't even think about it!

And then back their words with that priceless collateral -- their lives, their fortunes and their sacred honor.

Where do we find these giants? How lucky we are. 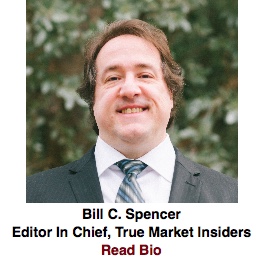