How Uncle Sam is Stealing From You - Unless You Do This

I know what you're thinking.

"Uncle Sam is my trusted uncle.  He would never do that."

Isn't that always the case?

Looks like a strong bull market.  Heck, just this morning I opened my conversation with our very own analyst, Tim Fortier (referring to the strength of this bull market) by saying "It's the late 1990s out here".

You might be skipping down the street, filled with euphoria after buying one of my Alternative Energy recommendations from my November 17 issue of True Market Insiders. 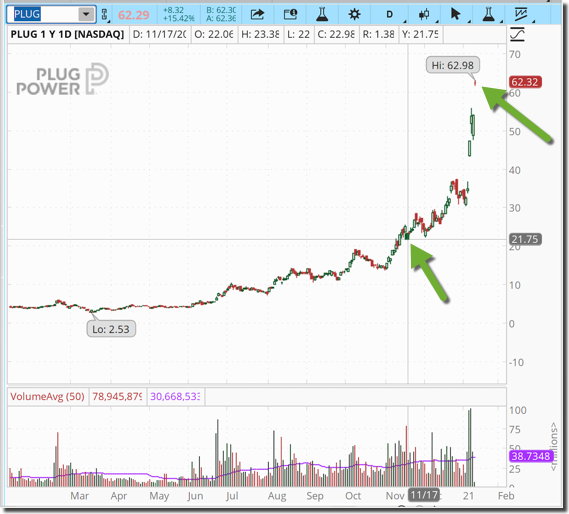 But most individual investors have little discipline and no framework for making their trades.  Your next door neighbor who bragged about doubling his account will assuredly be the one whose account is slashed in half later on.  (Hint: He won't update you when that happens.)

But it's not the U.S. government's fault your neighbor decided to put 1/2 of his investment account into a single Call option.  That's simply your neighbor being high on dopamine.

The government thievery that I'm referring to is one you've definitely heard of and almost certainly don't fully understand.

You see, the country just got whacked with a sledge hammer that's as big and as heavy as a $4 trillion pile of hundred-dollar bills.

But there's a small hand full of sectors you can use to numb the pain.

I grabbed this next chart from the Federal Reserve's own website.  It shows their balance sheet.  When the Fed creates new money out of thin air, and then pushes that money into our monetary system by purchasing existing mortgage backed securities and Treasurys, those actions reflect on their balance sheet. 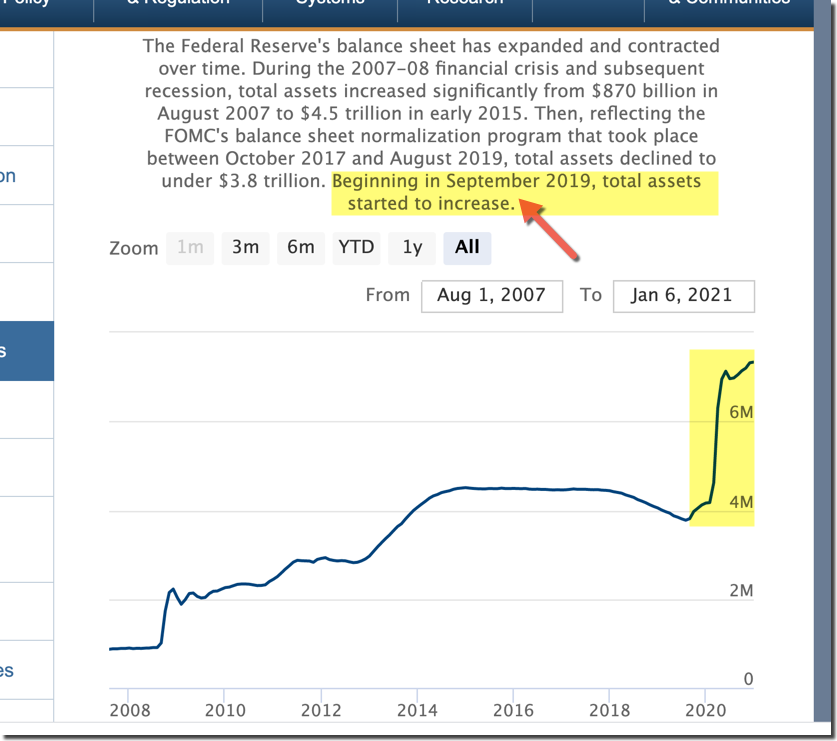 They failed to address the additional $3.7 trillion they created out of thin air and dumped into our monetary system.

For those who'd fall asleep if I explain what this does, I'll make it nice and simple.

If you slice a pizza pie into four pieces and eat one piece, you'll likely be pretty full if you're in a nice, family-run New York City pizza parlor (not some nasty ass Papa John's or Little Caesar's).

But if I wanted to turn that into a pizza pie with 100 slices (you know... so that I have more slices of pizza to feed people with) then one slice would only be a tease.  Little Teasar's.  (sorry).

That's way oversimplified but I did it in two paragraphs so let's keep it moving... 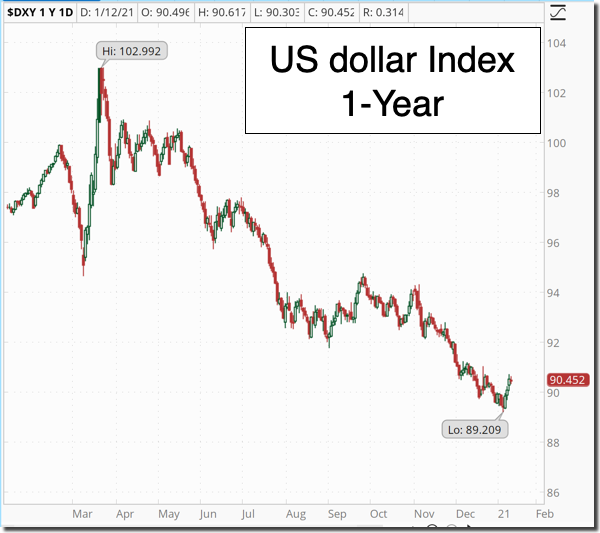 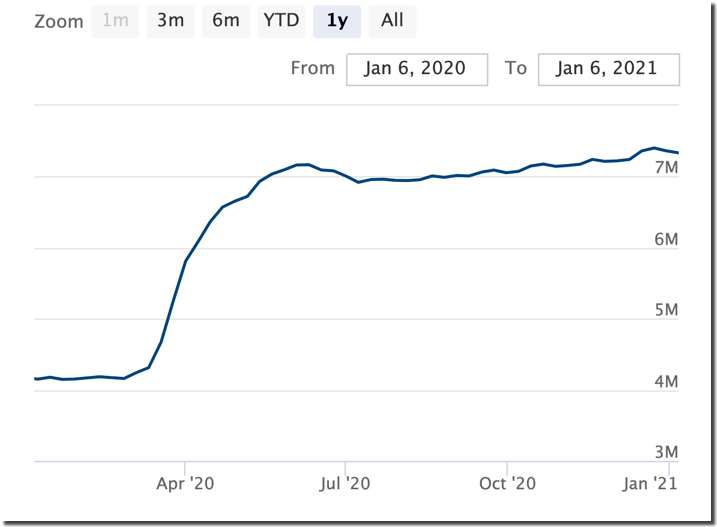 If you've ever seen the 2001 version of the film Ocean's 11, there's a scene where the owner of the casino being robbed, Terry Benedict (played by Andy Garcia), is in the security video monitoring room looking at his vault, which holds $160 million.

He doesn't realize they had rigged the monitoring system with an old video so he wasn't watching the vault live.  He thinks his money is still there. After all, he can SEE IT with his own eyes.

But when prices go up (said differently, when the value of your dollar goes down), you can't buy as many goods and services with it.

It's a "slow boil" so you barely feel it happening. 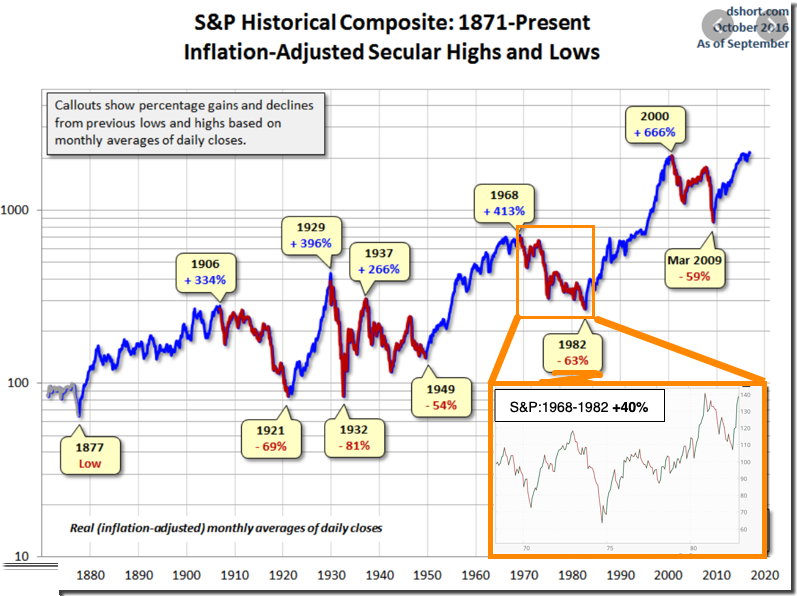 I grabbed the above chart from Advisor Perspectives.

It shows the inflation-adjusted stock market.  I layered on top of it a chart of the regular S&P 500 from 1968 - 1982 so you can compare that shiny object people are focused on to the real value of an investment in the stock market.

From 1968 to 1982, when you adjust for inflation (which makes your dollars lose value), instead of the 40% gain everyone else sees, you experienced a 63% decline!

So you do have more dollars... but they actually buy you less stuff.

So what the heck can we do about it?

You might think this only affects people who aren't investing their money to keep up with inflation.  While sitting in cash was even worse, throughout the inflationary 1970s, this chart proves that stock market investors still get hit hard. 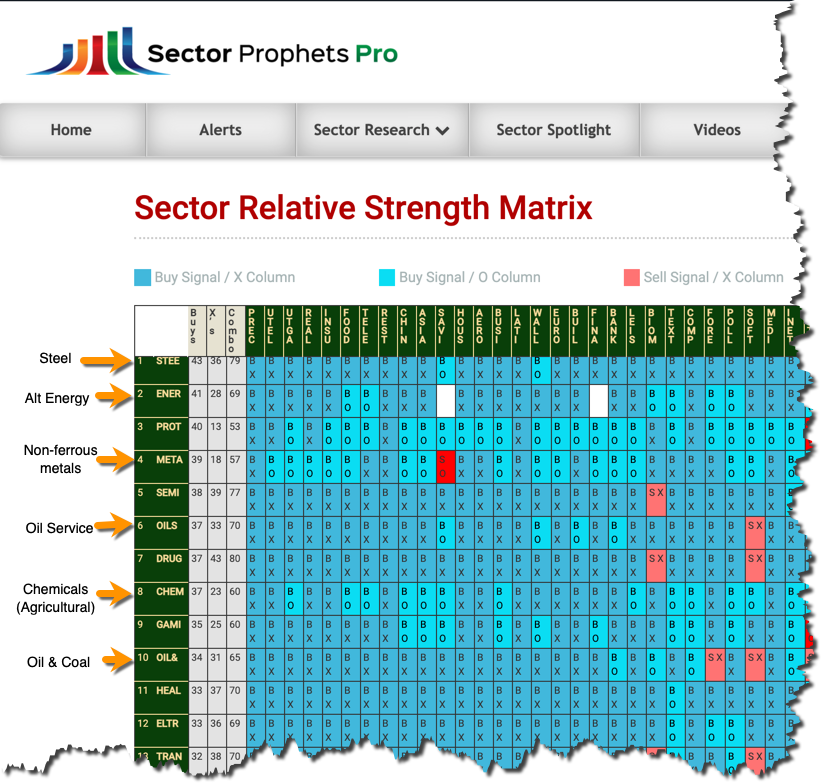 Here's a screen-shot I snagged from our platform, Sector Prophets Pro (currently closed to new members).

It breaks the market down into 41 sub-sectors (and also tracks 4 international groups).  It then ranks each sub-sector against every other group, one-by-one, in terms of relative strength.

Based on those relative strength comparisons, it ranks the groups from 1-45.

The power of this platform can't be overstated.  It told us to buy these sectors a long time ago.  The relative strength of sector prices trends just like stock prices trend. In other words, whatever is super-strong now is likely to stay super-strong for the foreseeable future.

And based on the Federal Reserve's creating all that new money and pushing it into our system, diluting the value of our currency, I just don't think you can put that genie back in the bottle.

The best way to play it is not to own a balanced portfolio that mimics "the S&P 500".  Unless you want to experience what investors experienced from 1968-1982.

Instead, overweight your portfolio in commodities-based stocks and ETFs. Keep a decent cash position too, so you can buy the dips.  Buy steel stocks, energy stocks, alternative energy stocks, chemical stocks, metals stocks -- or their sector ETFs.

If you're afraid of buying at overbought prices, then sell naked puts to back into the positions and collect income. The uptrend is far from over.  In fact, it's just beginning.

Remember what happened to real estate and commodity prices when the Fed lowered rates from 2000 - 2003?  Commodities multiplied many times over until May 2008. The dollar declined, commodities went up and China built their country.

Considering how much of a windfall China is receiving from our small-businesses being evaporated (pushing customers to Walmart and the like), I'm guessing they'll start building more, adding even more demand to commodities.

Of course, I'm just being a speculative grumpy old man. What do I know?

The sad part is, the only way it's possible to pay back China and Japan the U.S. debt they're owed is to do so with inflated dollars.