We’ve Scheduled a “Do Over” For You

Hey – If you missed your chance to have Chris Rowe show you how to spot the PERFECT trade (out of 30,000 stocks)... Great news. We’ve released a recording of the event, full and uncut.
Click here for a ringside seat

What's In YOUR Index?

Editor's Note: We have something special for you today. It’s the “kick off” column from guest editor Tim Fortier.

And you’re in good hands. Because Tim has spent his entire 30+ year career in the financial markets. He's an award-winning entrepreneur, author, money manager, and Chief Investment Officer.

The man’s a true market expert. He’s mastered nearly every type of investing  strategy. From William O’Neal’s C.A.N.S.L.I.M method… to the quantitative style of James O’Shaughnessy… to the “true market” relative strength approach.

Tim is also quite the outdoorsman. He’s an accomplished fly fisherman who loves hiking, snowboarding, and mountain biking with his wife and two children.

We’re proud to have Tim with us today.

Today, investors have put over $4.3 trillion dollars into passive index funds, equaling the amount invested in active funds, according to Morningstar.

Index funds are popular because of their simplicity and low costs. And with the major U.S. market indexes trading near their highs, performance has been superior to most active funds.

For investors, investing in a fund like an S&P index fund seems easy enough. One investment... 500 stocks... and the appearance of a diversified portfolio.

Yes, I said appearance... for as you're about to learn, investing in an index fund isn't as diversified as you may think.

Indexes like the S&P 500 are capitalization-weighted, meaning they're weighted by the total market value of a company’s shares outstanding.

Today, Apple, Microsoft, Amazon, Google, and Facebook (AMAGF) are the five largest U.S. companies and collectively account for 22.59% of the market value of the index.

Note that all five of these companies are technology companies. There's never been another time in market history where so much wealth was concentrated in just one sector.

To really grasp the significance of this, these five names -- which account for just 1% of the names -- have a total market capitalization of $6.84 trillion. This equals the total market value of the bottom 367 companies in the S&P 500!

To understand how this impacts investors, consider the following: 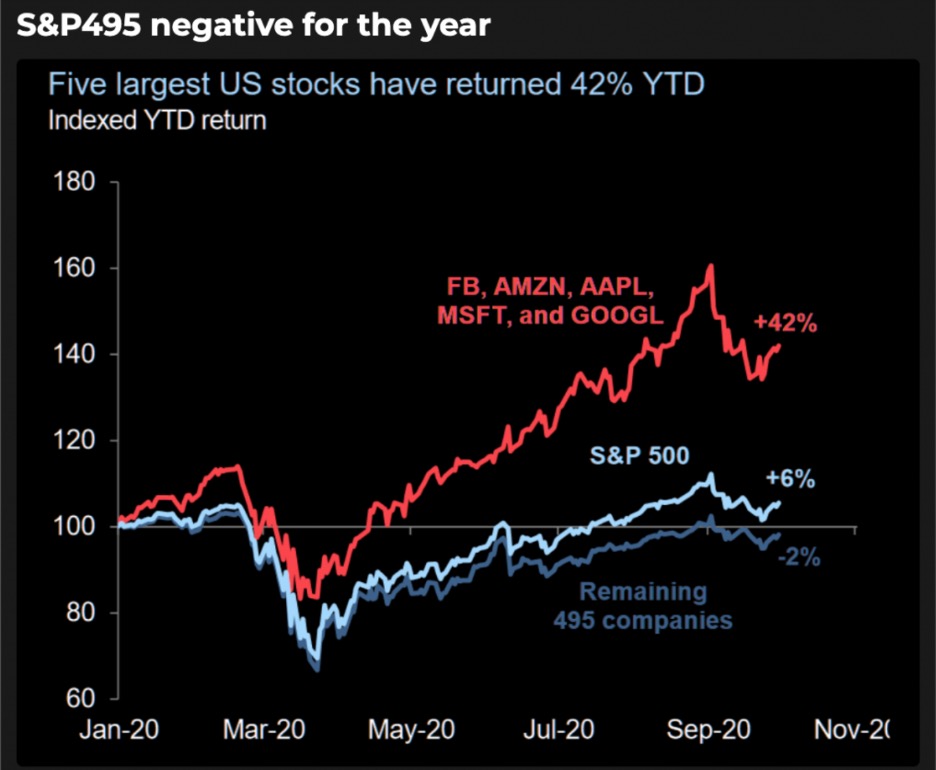 Year-to-date, the S&P 500 was up about +6% as of the end of September. Within that +6% return was a 42% return contribution by the five largest stocks.

The other 495 stocks had delivered a net contribution of -2%, which would be the S&P 500 return if those five stocks weren't included.

Another way of understanding the significance of market capitalization weighting is to compare it to an equal-weight index calculation. In the latter, every stock contributes equally to the performance of the index. 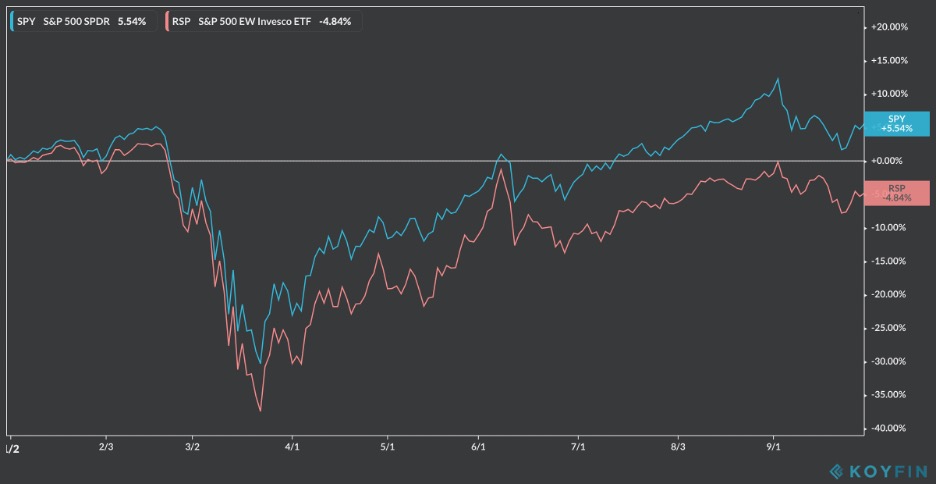 Since very few individual investors would cap-weight their own portfolios, the equal-weight S&P 500 makes a better comparative benchmark.

These are the exact same stocks -- just a different way of calculating their performance.

So, in essence, what this is saying is that the average stock has a loss for the year despite what the widely reported, cap-weighted number reflects.

The dispersion in returns of the handful of leading technology stocks and the rest of the market points to narrowing breadth. In other words, few stocks are actually participating in market rallies.

And we can see this too when we plot the NYSE Bullish Percent, our favorite indicator, agains the market average itself. 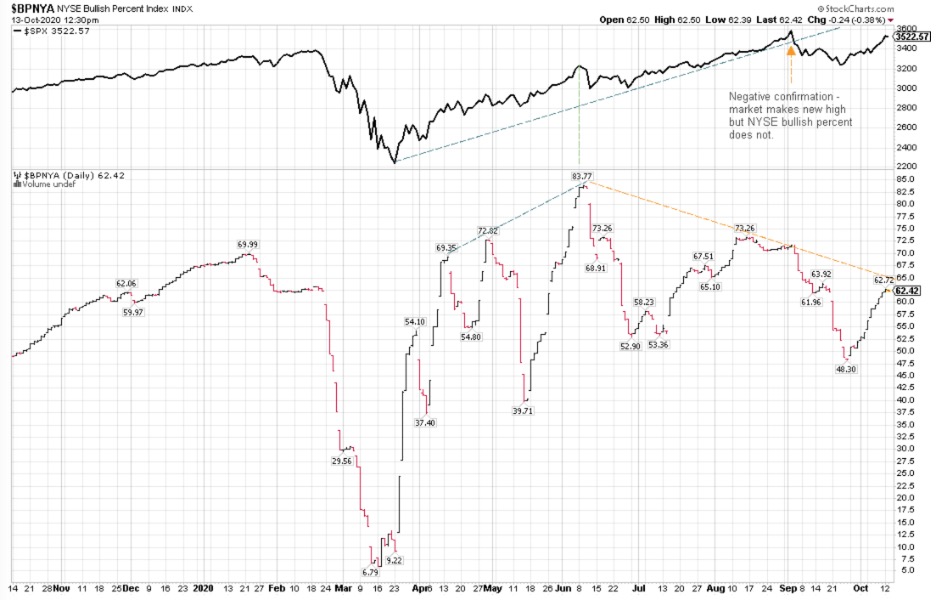 Now, you might be wondering why any of this is important?

The previous time when market concentration rested in so few stocks was in the period leading up to the dot-com bubble. As was similar then, the biggest companies were growth stocks commanding steep price/earnings multiples.

Michael Burry, the hedge fund legend whose prescient bets on the subprime mortgage crisis led to a silver screen depiction by Christian Bale in “The Big Short,” has publicly expressed his concerns over passive indexing.

As money pours into exchange-traded funds and other index-tracking products that skew toward big companies, Burry says smaller-value stocks are being unduly neglected around the world.

A second important takeaway from this, is the performance cost of indexing.

In a market where so few stocks account for so much of the performance, dollars allocated to an index are automatically allocated to underperforming stocks.

And as I will explore in next week’s topic, as much as 15 cents of every dollar invested in an index fund is allocated to dead and dying industries caused by Covid-19.

Selectivity is highly important in a market environment like we are in today.

For market-cap-weighted indexing to continue to reward investors, it becomes important to examine the sustainability of earnings and revenue for the top holdings.

At the consensus estimate of 18%, how large would the five stocks be in the five-year projection period?

If their prices rise on a 1:1 basis with revenue (roughly a constant P/E ratio), then their aggregate market capitalization will expand from the current $6.84 trillion to $15.64 trillion.

This seems highly unlikely, as all five companies are dealing with increased market saturation and economic headwinds.

Google and Facebook, who get most of their revenue from ad spending, are facing single-digit expected growth by 2022.

There remains regulatory risk as well.

Google, Facebook, Netflix, Microsoft, Amazon, and Apple account for 43% of all internet traffic. The infrastructure to support this is provided by the likes of Comcast, Verizon, AT&T, and T-Mobile.

In the past year, the telecom industry has spent $64 billion upgrading and maintaining those networks.

Meanwhile, the mentioned companies that consume all of the aforementioned bandwidth have spent very little in comparison -- essentially outsourcing the development to the telcos for no compensation.

There's economic impact to this. T-Mobile hasn't generated free cash flow since 2012, since all of its cash flow and more has been reinvested into its network.

If the primary users of internet bandwidth are ultimately required to pay for their use of the infrastructure, the impact upon their profitability would be consequential.

And none of these factors speak to the increasing likelihood of a slower-than-expected economic recovery as a result of Covid-19.

Nor do they speak to the record high valuation being assigned to the current market leaders.

The insanity of paying 12x sales for large-cap stocks speaks to the "greater fool" theory. You really need the next guy to come in and lift you out of your shares at an even higher price. At nosebleed valuations, that’s your ultimate investment philosophy.

At 10x revenues, to give you a 10-year payback, I have to pay you 100% of revenues for 10 straight years and dividends. That assumes: shareholders approve, zero-cost goods sold, zero expenses, no taxes, zero R&D, and we maintain the current revenue growth run rate.

Do you realize how ridiculous those basic assumptions are? You don’t need any transparency, any footnotes. What were you thinking?

If Michael Burry is correct in his call, as he was with subprime mortgages, then the next decade will reward investors for taking a different approach rather than simply blindly buying passive index funds.

Selectively will be key, as will having a proven and systematic approach to discovering winning stocks.

Fortunately, True Market Insiders is well prepared for this. We've been providing investors with the tools and the education to succeed in the market for years.

When we meet again next week, I'll have more to say about all of this.