We’ve Scheduled a “Do Over” For You

Hey – If you missed your chance to have Chris Rowe show you how to spot the PERFECT trade (out of 30,000 stocks)... Great news. We’ve released a recording of the event, full and uncut.
Click here for a ringside seat

How to Tighten the "Nuts and Bolts" of Your Investment Strategy

When you invest in the sectors that are outperforming the market, you dramatically increase your odds of picking stocks that will outperform the market.

And you can drill down even further...

Essentially, you’re tightening every "nut and bolt" in your investment strategy.  You're selecting the right investments, all the way down to the level of the individual stock.

Full Disclosure: You don’t even have to take that last step because you don’t have to invest in individual stocks.

When you see that a sector starts to outperform the general market, you can buy an Exchange-Traded Fund (ETF) that focuses on that particular sector.

This approach eliminates many of the risks that come with owning an individual stock, because ETFs are generally well-diversified baskets of stocks.  (We'll talk more about that in future conversations.)

They pull up a chart of a stock with an overlapping comparison of that stock to the S&P 500 Index.

Here’s the wrong thing to do.

You can see in this old chart, below, that both the stock (PJC) and the market (S&P 500) start at the same point. This chart merely shows that the S&P 500 (brown line) moved up 5%, while in the same time period, PJC moved down about 12%. 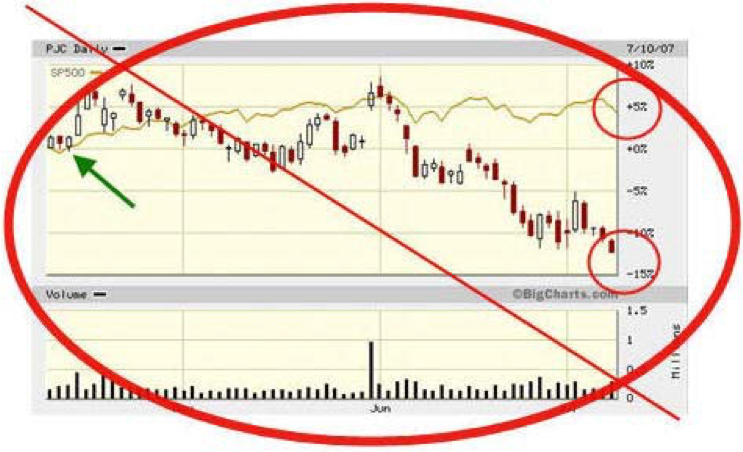 You can see, below, that if you changed the time frame from three months to six months, the chart would look very different. 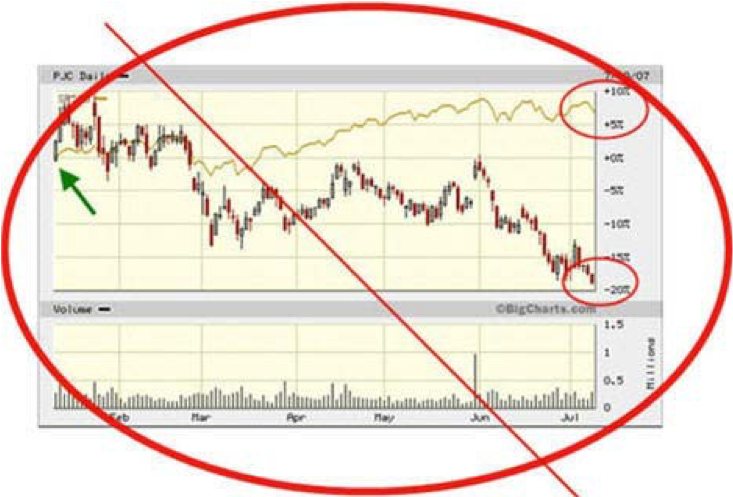 My point is that these are NOT relative strength charts.

Strong relative strength just means that one investment vehicle outperforms another. It performs better, which includes performing “not as badly”.

This can happen in one of two ways:

When the market moves higher -- A stock with strong relative strength moves up more than the market does.

2) When the market moves lower -- A stock with strong relative strength either moves up or loses less, on a percentage basis, than the market does.

Weak relative strength just means that one investment vehicle underperforms another. It performs worse, which includes performing “not as well”.

This can also happen in one of two ways:

1) When the market moves higher -- A stock with weak relative strength either moves lower or moves up less than the market does...

2) When the market moves lower -- A stock with weak relative strength loses more, on a percentage basis, than the market does.

When we can identify the current RS situation, we have a much clearer picture of the current and future situation. And when a change in that trend occurs, we can easily see it happening, giving us time to react.

By keeping bullish positions in positive relative strength stocks and sectors, your investments will be much more resistant to stock market declines, and will likely snap right back up once the market rebounds and moves higher again.

That’s why it’s important, when the market is moving lower, to pay close attention to the areas with strong relative strength. That’s how you’ll develop the best “shopping list” of potential new positions.