Avoid These 5 Energy Stocks at All Costs

Energy is one industry that I’d consider for bearish positions (positions that have an inverse relationship and advance when prices decline).

The average market player might disagree. Brent crude oil spotted prices averaging $45 per barrel in August, and that’s up $2 per barrel from July’s average.

So why be bearish on Energy?

Partially as a hedge against potential decline against your other stock positions. After all, the “True Market” is showing us that “the supply side” of the market currently has control.

But because the stock market had been extremely oversold (“washed out”) as recently as mid-March, the following bull market is likely to be resilient for some time. So, we aren’t looking for a huge follow-through to the downside when it comes to the recent market turmoil…

At least, not when it comes to the major market averages.

But certain sectors of the market will have a tough time going higher — and Energy is certainly one of them.

So, primarily, I’d consider Energy as a place to look for a bearish hedge. Reason being, from the perspective of relative strength, the Energy sector just moved from a ranking of #3 down to #7.

A four-spot decline in relative strength, out of 11 sectors, is a pretty significant decline.

Interestingly enough, one of the world's most well-informed Energy insiders just made the bold prediction that oil consumption has already reached its all-time high.

If I told you just one year ago that someone had suggested this, you’d have said that this insider was Looney. And you would have been dead right.

BP’s chief executive officer, Bernard Looney, said oil use may have already peaked as a result of the pandemic, stricter government policies, changes in consumer behavior, increasing efficiency, and electrification of road transportation.

Most senior executives at the Energy giants disagree, as do the ministers from OPEC states. They think the exact opposite — that oil consumption will see decades of growth.

But Bernard Looney outlines three scenarios, and all three point to a decrease in demand in the coming decades. 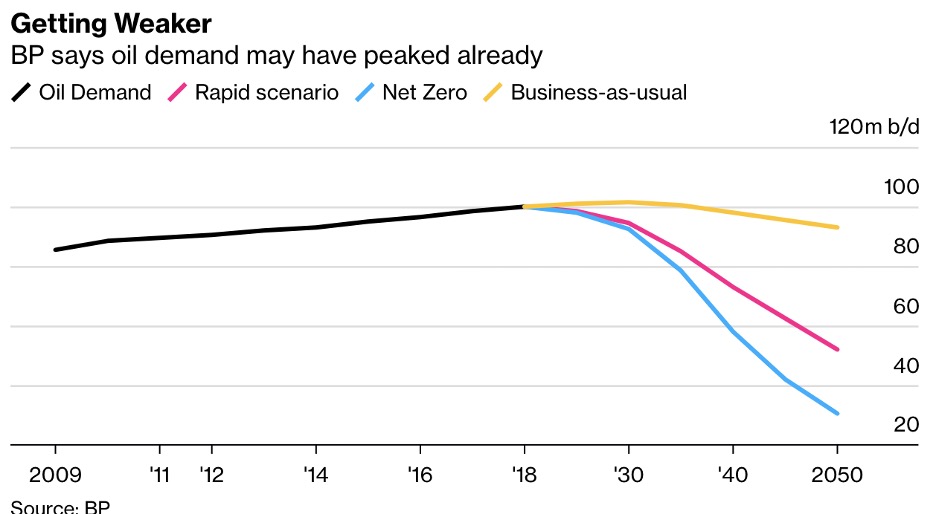 I’ve seen market pundits claiming that BP’s prediction explains the reason it recently aligned its business with the Paris climate accord, which is in stark contrast to the other oil giants. But is BP really going to have its day in the sun, while the others stay mired in the muck?

It certainly seems to be putting its money where its mouth is.

Looney said he’d “shrink oil and gas output by 40% over the next decade and spend as much as $5 billion a year building one of the world’s largest renewable-power businesses.”

He says oil’s supremacy is challenged and will ultimately fade.

This may sound insane to… well, almost every other oil expert. But so would the idea of Peabody Energy, a.k.a. “King Coal” filing for Chapter-11 in 2016 had anyone made that prediction back in 2008 when Fortune Magazine named it one of America's Most Admired Companies.

Coal used to have one of the biggest lobbies in the U.S., producing 50% to 60% of electricity. And the perception was that there was zero chance it'd be eclipsed by electric production.

At the time, natural gas was expensive and “it was clear” that “coal was forever”.

I’m only discussing this story because it happens to be in the news, and it’s fun to read. But at True Market Insiders, we’re not so concerned with the “why”.

Here, we focus on the “what”. And what’s happening right now is that large investors are dumping Energy stocks.

In my opinion, some of the weakest-looking Energy stocks are:

I’ve added some Put options to these bearish plays so that you can either sell short the stock or buy the Put (both plays profit from declines, or lose value when the stocks advance).

I wouldn’t want to be in an option that expires in fewer than 90 days. So keep that in mind and consider rolling the position out when the expiration gets too close (like the January Puts one month from now).

Also, please note that options are a highly leveraged instrument and they’re super fun when they work out, but can be just as painful when they don’t. (I’d buy 1.3 - 1.5 Put options for every 100 shares I would have otherwise sold short.)

Also, I’m not going to guide you out of these positions. So use reasonable loss-protection strategies.

These are to be used as a hedge against losses on your bullish positions. So keep reading True Market Insider, because we’ll report when the True Market has demand taking control back, and when the fund managers end their sell programs and reinstate their buy programs.

When demand comes back, we’ll no longer need the hedge.

I hope this helps you to hedge against risk as opposed to you taking an outrageous bearish bet.

The most important part of money management is “Risk Management,” and market timing is among the least important factors. Always remember that what counts the most is risk management and sector focus!