Small-Cap Saturday - Deep In the Heart of the "Internal Market" 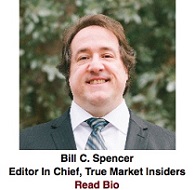 Thanks as always for stopping by.

Today, in the spirit of the lockdown that has recently been lifted -- and good riddance to it -- we're going to "home school".

But instead of the A-B-Cs were going to dive into the P-N-Fs (That'll make more sense in a moment, I promise.)

Just know that we're going to look into one of the most essential tools in all of trading.

This week the market pulled back the way a noisy bull pulls back out of a china shop. It made a lot of noise and left a pile of broken dishes in its wake.

It also broke a streak of three winning weeks in row for the market.

Major average declines ranges from -2.29% for the Nasdaq Composite... 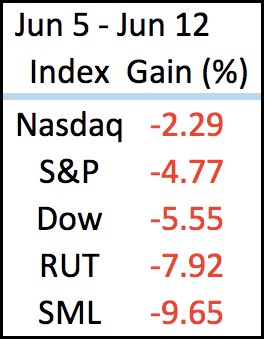 That the market pulled back was hardly a surprise.

A glance at the market "internals" showed that we were in an overbought state and that the market was ripe for a corrective decline.

Following the market close last Friday, the bears "held" just two of the 45 sectors that make up our stock market universe. You can see those two bearish sectors in red, above.

(The Bell Curve shows whether a given sector is in an 'X' or an 'O' column on its respective Bullish Percent Index (BPI) chart. Blue means 'X' -- strong in the short-term -- while red means 'O' -- weak in the short-term.)

Fully 39 (86%) of those blue/bullish sectors were to the right of the 50% "mid-field" position. That means their BPI charts were edging closer to the overbought region of the chart (70%).

And fourteen of those sectors (31%) had actually invaded the overbought region. Those are the ones lying to the right of the vertical yellow line in the image above.

And notice how few sectors now lie to the right of that red vertical 70% line.

The pullback on June 11th caused our primary indicator, the New York Stock Exchange Bullish Percent Index (BPI) to reverse from a column of X's into a column of O's. 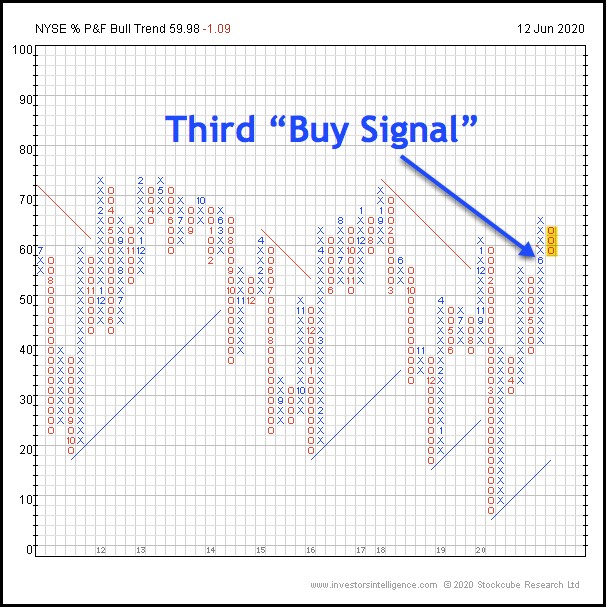 It had also just put in its third Buy signal. And while it hadn't reached the "official" overbought level past 70%, it was coming close.

(I've posted a commentary all about this latest reversal onto our free "BPI Page". you should bookmark that page and refer to it often, as it goes into more detail about NYSE BPI reversals and "signals".)

Today I want to dive deeper into the very heart of these BPI charts we talk about so frequently in "Small-Cap Saturday".

To do that, we'll focus not just on what these charts tell us... but on how they tell it.

Which brings us to the workhorse of the BPI chart -- the "Point and Figure (P&F)" chart.

WHY USE POINT AND FIGURE CHARTS?

I think you'd be hard-pressed to find a technical trader who didn't use and even swear by P&F charts.

For one thing, because of how they're put together P&F charts tend to smooth out much of the noise you see on many line charts, OHLC bar charts and candlestick charts.

To see what I mean, compare this view of a 5-year chart of Provident Financial Services (PFS).

... with the corresponding data shown on a longer-term P&F chart of the same stock.

Both the first chart and the highlighted section of the P&F chart, below, extend from June 2015 through to June 2020. 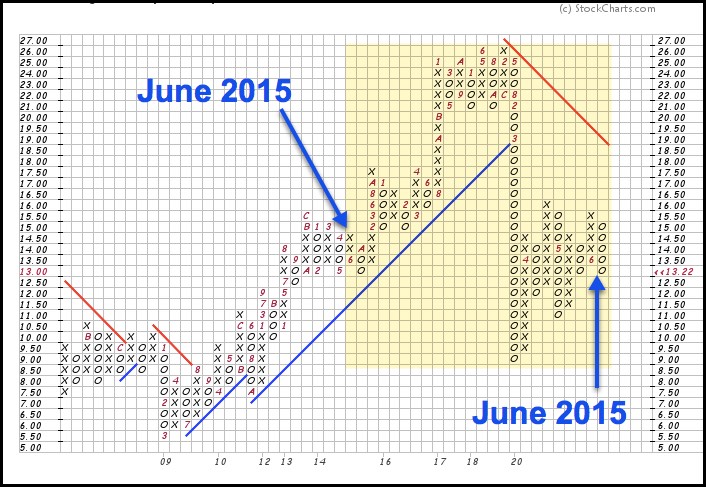 As you can see, the P&F view is much cleaner. And as you're going to see, that makes the chart's signals very easy to spot.

When the most recent column on the chart (the one at the far right) is filled with X's -- that's considered bullish. If filled with O's it's bearish... in the short term.

To discover the longer-term disposition of the chart we need to determine the "signal", and doing so is refreshingly straightforward.

That's because a P&F chart is always, unambiguously, on either a Buy signal or a Sell signal. No in between.

But remember, we said a P&F chart is always on either a Buy or Sell signal. So the chart can only "go on" a Buy signal when it's already on a Sell signal, and vice versa.

... the chart is considered to still be on a Buy signal. The same holds true for a flip to a new X's column from an O's column when the chart is on a Sell signal.

Another reason P&F charts are so valuable is that they remove time from the consideration. As you saw in the PFS example above, a P&F chart can stay in one X or O column for months at a time.

Only when there's a substantial shift in the relationship between the bulls and the bears will you see a "flip" from that column to its opposite.

Does all this mean that P&F charts can't show you what's happening in the market at a very deep level?

Not at all. They can and they do.

I say more about that in a week or so when we go deeper into the NYSE BPI.