Did the Bear Trap Just Spring a Summer Rally?

If there was ever a time to slay a bear, this was it!

Just last week we hoisted the caution flag up the pole and alerted you to a couple of big warning signs.

The basic message was that it’s probably better to be in wealth protection mode than wealth accumulation mode.  We suggested that you lock-in some profits, raise cash

Those can be very smart things to do when your technical indicators are flashing warning signs, as they were last week.

For instance, we noted how long it had been since the broad market indices had made new highs – the S&P 500 had not made a new high in more than 13 months, and until it could break above that significant level of resistance, it was better to maintain a cautious outlook.

Well, thanks to a strong jobs report on Friday, Japan’s coalition government winning a super majority in parliamentary elections over the weekend and the UK quickly finalizing a replacement for Prime Minister a few days ago, the large-cap index smashed that glass ceiling of resistance and sent a rather large shard right up the bear’s big ol’ behind. 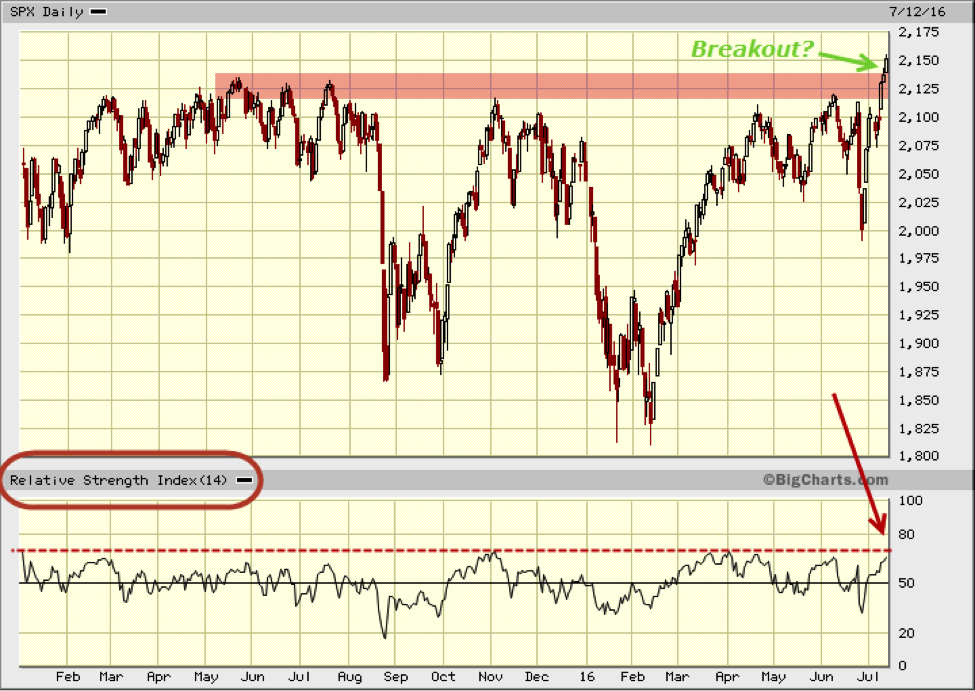 The second technical observation that had us urging caution was the fact that the NYSE bullish percent index (BPI) flipped to a column of O’s shortly after the Brexit selloff. If you’re familiar with the BPI, or have been reading True Market Insider for any length of time, you’ll recognize this as a bearish development.

Well, in a remarkable turnaround, the NYSE BPI just flipped again, to a column of X’s!

In other words, the bulls retook control, essentially pulling the rug right out from under the bear’s feet.

And what makes this so remarkable really has to do about speed, because it only took nine trading days to reverse back to a column of X’s!

You see, since the NYSE BPI is an internal strength indicator over the medium to longer-term, it’s not unusual at all that the current column can remain intact for weeks or even months at a time.

That’s what we call a classic bear trap!

Demand is back in control:  NYSE BPI flips to a column of X’s 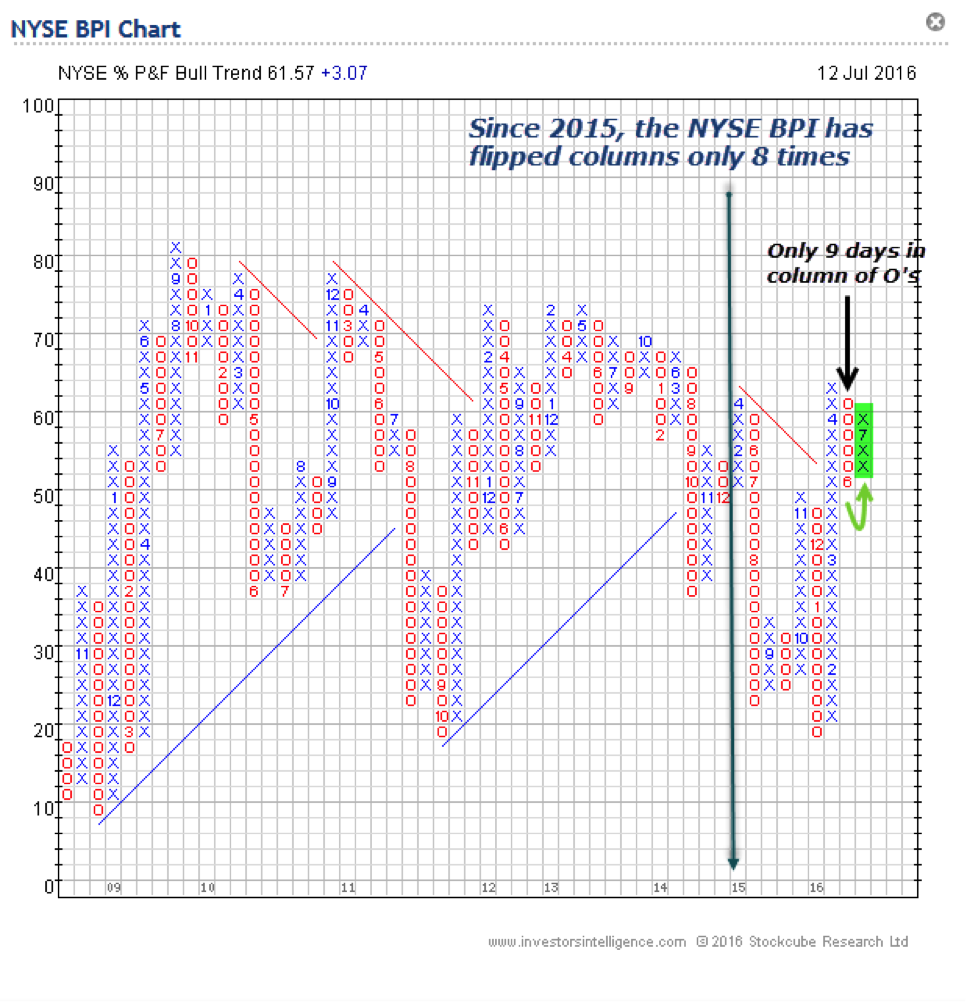 Now, I know what you may be thinking…

“Costas, you just warned me to be cautious a week ago.  Now, you’ve completely changed your view.  You probably should throw your hat in the upcoming presidential ring because you can flip flop your positions with the best of them.”

I can understand if you might be feeling a bit frustrated or confused.

So let me explain…

We’re not flip-flopping at all, we’re adjusting.

You see, we take on a completely objective view of the market, and when our indicators clearly signal a significant shift, we shift.

We utilize a top down approach, first analyzing the broad markets…

Then, we employ a Relative Strength strategy in an attempt to generate superior returns versus the broad averages.

You see, buy dissecting the markets into tiny pieces, or narrow sectors, we can identify the strongest parts of the market that give us the best chance to outperform.

And now that our indicators have shifted to a positive position, we should change our sentiment to a more bullish stance, right?

While it’s true that our medium to longer-term outlook has notably improved, it’s also important to pay attention to what’s currently going on in the short-term.

You see, while the S&P 500 has indeed finally broken out to a new high, keep in mind that it’s gained 7.6% in the past 10 days!  In other words, trading conditions are becoming overheated and the probability of a pullback in the short-term has increased.

If you refer back to the S&P 500 chart above, notice that I included a 14-period Relative Strength Index (RSI) technical indicator.  Basically, this is a momentum oscillator that measures speed and change in price movements.  And when it moves above 70, the RSI is considered to be overbought, meaning that trading conditions are vulnerable to a short-term selloff.

As you can see, we’re not too far away from meeting that threshold.

Another indicator that can help identify an overbought condition is to look at the S&P 500 %10 Week Moving Average.

This indicator tells us how many stocks (expressed as a percentage) in the index are trading above their respective 50-day simple moving averages.

And when the tally rises above 70%, an overbought trading condition has materialized.

After Tuesday’s close, it hit a frothy 85%. Yikes!

Longer-term market conditions returned to positive, but a potential short-term pullback is likely 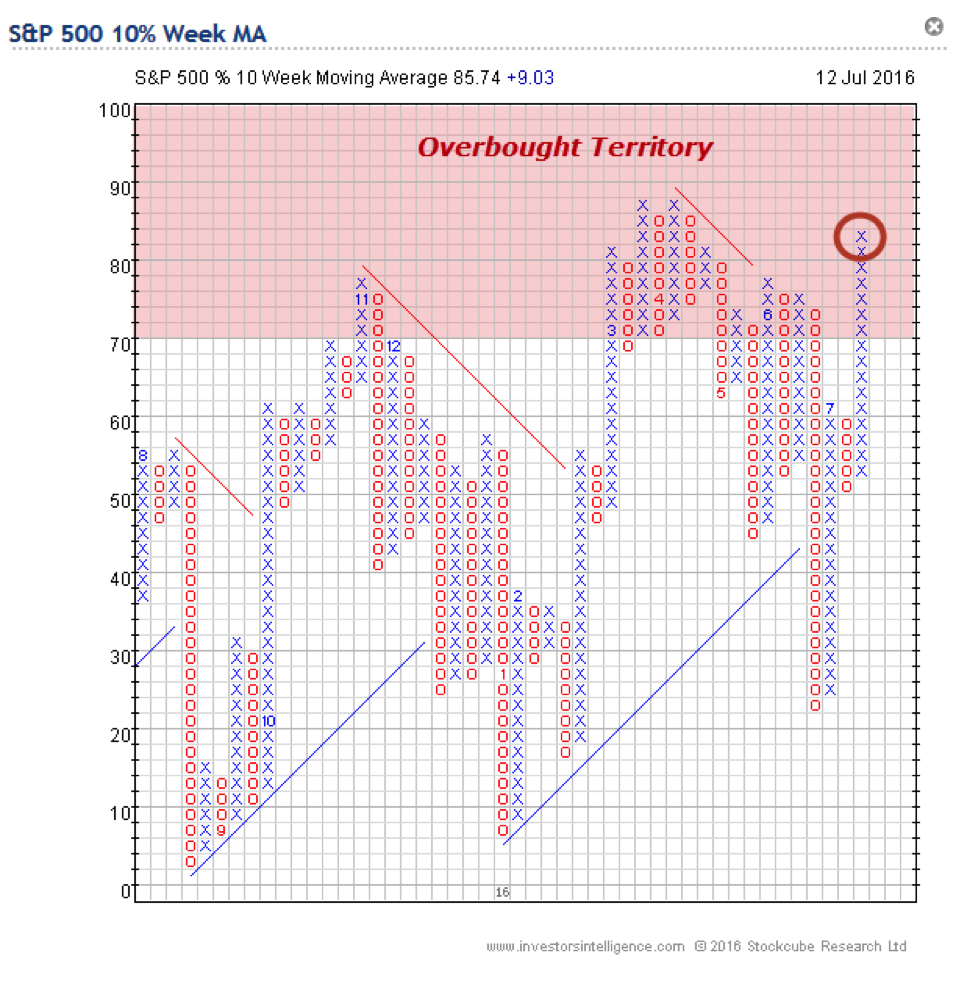 Since demand has retaken control, we should now look to buy or accumulate bullish positions on short-term weakness.

So actually a near-term pullback to clear the overbought condition should be considered a welcome development.

In terms of which sectors are demonstrating the most positive relative strength, we can refer to our sector matrix comprising over 40 narrow sectors.

Think of it as a giant round robin tournament, pitting every sector against every other sector.

This analysis allows us to easily identify the strongest sectors relative to all the others.

Not much has really changed since the rally off the Brexit bottom.

Precious metals, Steel & Iron, Utilities, Household Goods, and Medical Devices are all sectors that reside at the top of our Relative Strength leaderboard.

But one sector has been quietly making a move up the ladder with respect to relative strength and could be a good place to put fresh money to work, especially on any near-term weakness.

One way to get bullish exposure to this strong sector is through the First Trust Dow Jones Internet Index fund (Symbol: FDN).

It’s been in a steady, positive price trend and has been demonstrating positive relative strength versus the broad market.

At a recent price of $75 per share, it sits five points above its 200-day moving average and roughly three points away from breaking above its previous all-time high.

Some of the biggest components of the fund include high quality companies such as Amazon (AMZN), Facebook (FB), Salesforce (CRM), PayPal (PYPL), Alphabet (GOOGL), and EBay (EBAY).   In other words, you can get diversified exposure to the some of the best and strongest companies in the sector via the exchange traded fund.