Has the Market Bottomed? Find Out Here...

Everyone wants to know if the stock market has bottomed. 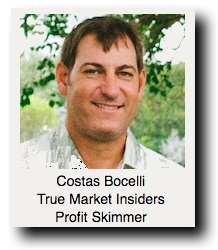 From the February record highs, that’s a decline of -35% from peak to trough. 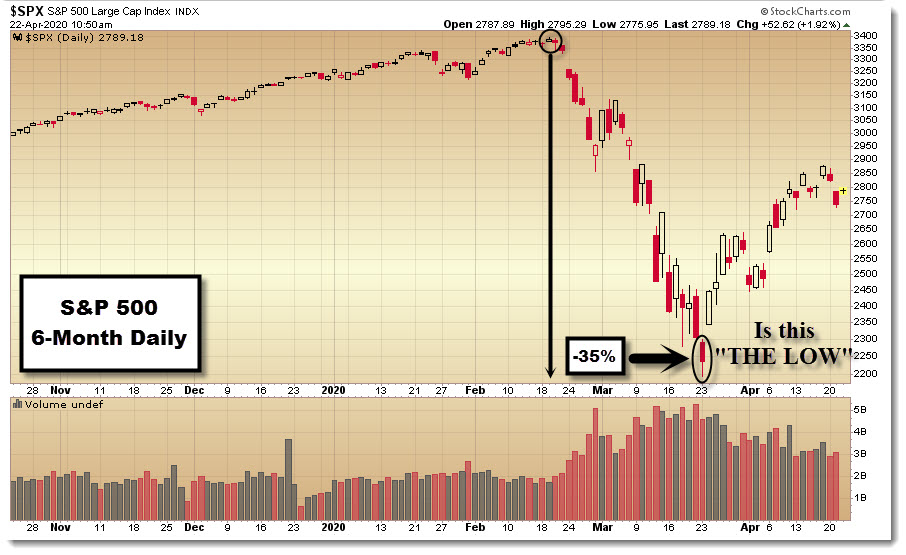 On that very same day, the two other major stock market averages (The Dow Jones Industrials Average and the NASDAQ Composite) also hit their respective lows.

And since, the indices have rebounded, gaining back a good portion of the losses.

But they all trade well below the February record highs and still considered in correction territory (a decline of 10% or more from the peak).

Some technical strategists believe that the bear market has only begun.

Others are less bearish, but are still skeptical of the bounce. They believe that the next bull market phase cannot begin until we see a retest of the March lows.

Often, it’s that second wave of selling that truly washes out the last of the weak hands and gives birth to a new bull market.  In fact, this is what occurred in early 2016.

While a retest of a major low is a typical bottoming pattern, it doesn’t always happen.

There is the V-shaped bottoming pattern too, like what had occurred in late 2018. 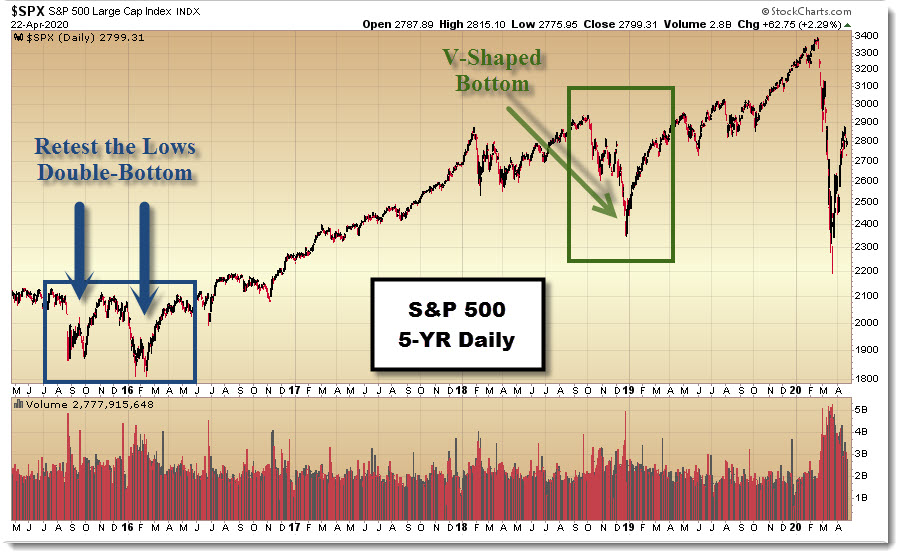 The stock market hit a major low on December 24th (the Christmas Eve massacre), then rallied and never looked back.

So far, this selloff is tracing the V-shape pattern.

But that doesn’t necessarily mean another selling tsunami is about to hit, or that we’re headed for a retest of the recent lows (or worse).

So which is it? Obviously no one can say for sure.

But there is one technical pattern hidden in the charts that points to the March lows as being THE "low” in the cycle.

I’m referring to a chart pattern known as an Outside Reversal.

What Is An Outside Reversal?

An outside reversal is a price pattern that indicates a potential change in trend on a price chart.

On a daily chart, the two-day pattern is observed when a security’s high and low prices for the day exceed the high and low of the previous day’s trading session.

Since the stock market has been declining and in a bearish trend, we’ll be looking to spot a bullish engulfing pattern. This is pattern you'll find on candlestick charts.

Generally, this is what a bullish engulfing candlestick chart pattern looks like. 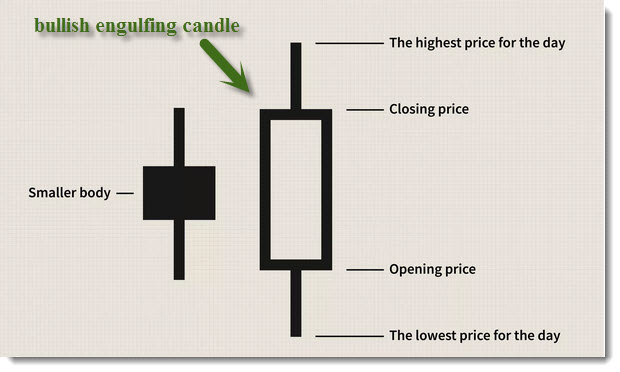 When the bullish engulfing candle pattern occurs at an extreme low it’s considered to be an “outside day” reversal – a bearish-to-bullish change in trend.

Do you see the candlestick in the black oval circle?

Does this ugly red candlestick look like a bullish engulfing candlestick?

The S&P 500 managed to finish well off the lows, but still closed down more than -3% on the day.

Now let’s make one simple adjustment to the price chart.

Instead of the viewing a daily chart, let’s look at the weekly chart in the S&P 500. 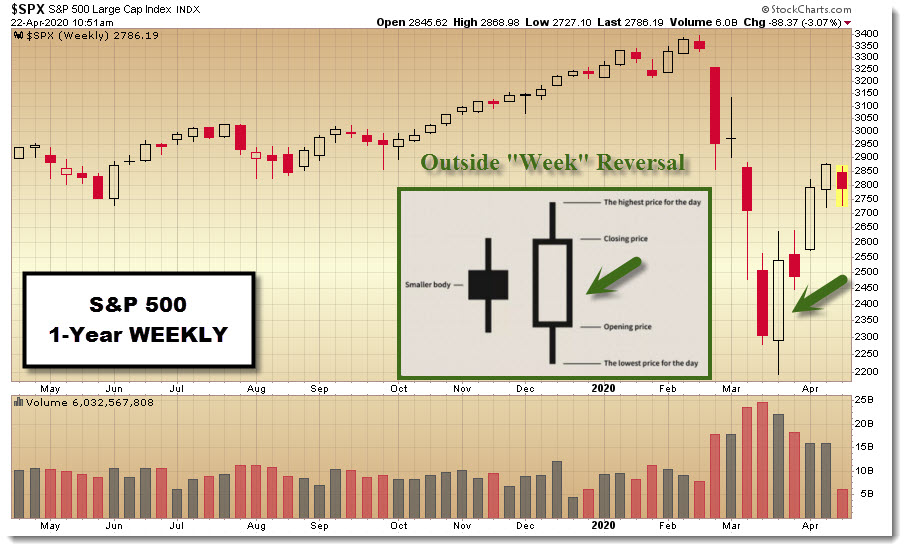 Look at the price action during the week-ending March 27th (the green arrow).

We see the S&P 500 finishing the week higher than the previous week while making a lower low and a higher high.  That’s a bullish engulfing candle.

And when it occurs after a major selloff (the S&P 500 declined -35% from the February record high), it’s considered an outside reversal.

And in this instance, we’re looking at an “outside week” reversal.

And let me tell you, “outside week” bullish reversals have been rare of late.

In fact, over the past four years, there have only been two other instances of this pattern formation.

And in both cases, the “outside week” reversal turned out to be THE LOW and a signal that the stock market was a screaming BUY! 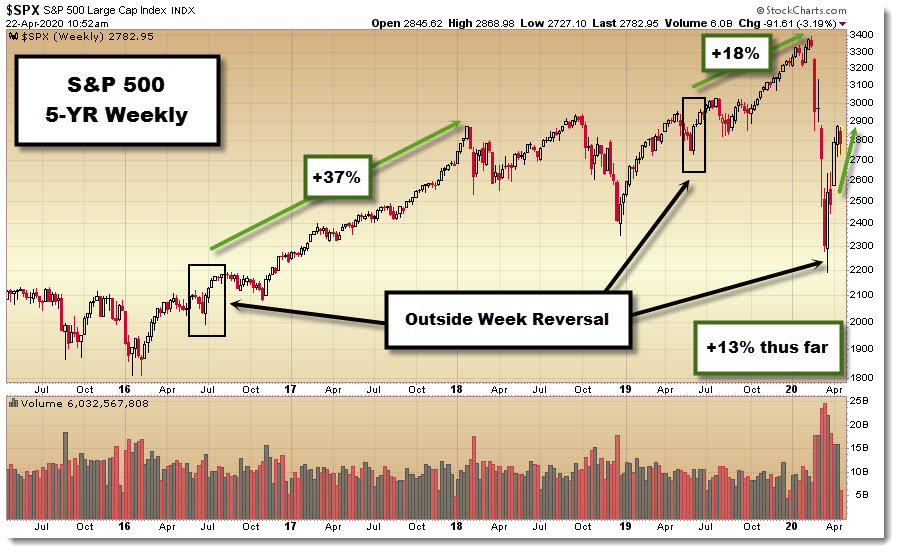 The previous outside week reversal was in June 2019.

And the one before that was in June 2016. This one happened to occur after the retest and double bottom low we mentioned earlier.

After that outside week reversal, the S&P 500 went on an 18-month rally, gaining an additional +37%.

This brings us to the recent outside week reversal in March 2020 For the week ending March 27th.

Time will tell if this outside week reversal marked THE LOW…

…and whether this corrective phase turns out to be V-shaped recovery, a double-bottom retest, or perhaps simply one pattern in a deeper bear market correction.

That history has yet to be written.

But what I will tell you is that global central banks and the government have taken extraordinary measures to pump massive amounts of liquidity into the financial system.

Should stocks again pull back, it will likely be a tremendous buying opportunity, and excellent news for those that have missed the rally off of the mid-March lows.

That's it for now.

In next week’s column, we’ll take a look at three strong sectors and three strong stocks that are beating back the coronavirus pandemic.

Until then, be well and stay safe!