Your Next 350% Profit Opportunity

There’s no better feeling for me than recommending trades that turn into huge winners.

Maybe a better feeling, even, than placing profitable trades in my own account.

Of course, not all of them are going to play out exactly as planned. It comes with the territory.

I mean, anyone who boasts that they’ve never recommended a losing trade is either a boldface liar or downright delusional.

But in the brief time I’ve been writing this weekly column in True Market Insider, I’m happy to report that both actionable options trading recommendations I’ve shared with you turned out to be highly profitable.

Back on May 5th, I recommended selling the Home Depot (Symbol: HD) May 130 strike Put option for $1.50 per contract. The option expired worthless, netting readers a tidy 28% annualized return on a cash secured basis (the most conservative ROI calculation by the way) in about two week’s time.

And on May 26th, I alerted readers to the fact that Tesla Motors (Symbol: TSLA) was showing poor relative strength versus the market and against its sector peers. So I shared a very powerful premium collection strategy called a vertical spread that was structured in such a way to profit in three out of the four possible scenarios between then and expiration.

And last Friday, the TSLA June 230/235 Call spread expired worthless. Readers who participated netted the entire $1.35 credit collected from the trade. The result yielded a very high return on investment of 37% in about three weeks, or roughly 640% annualized!

So on the heels of those trades, today I’ve got another actionable trade idea that I’m equally excited about.

We’re going to open up my options playbook once again.

Only this time, I’m going to show how you can take a bullish position in a stock while only dishing out a fraction of the cost.

In other words, we’re going to use options as a substitute for purchasing a stock or ETF.

But since we’re using only a fraction of the funds needed to purchase a stock or ETF, the returns on investment are amplified because you’re allocating fewer investment dollars.

And that means less risk, too.

So let’s get into it, shall we?

At True Market Insider, we take a top down approach when it comes to trading and investing.

In other words, we evaluate the overall market and then begin to peel back the layers and identify the strongest and weakest sectors of the market.

We call it relative strength analysis.

It’s a highly effective approach to analyzing the supply/demand relationship in the financial markets.

And just recently, we’ve seen a compelling shift in the longer-term relative strength among the major investment classes.

For quite some time, fixed income has been the strongest asset class, and the weakest has been commodities.

Heck, even sitting in cash, earning practically zero interest, has beaten the pants off commodities.

You see, the commodity asset class has vaulted past domestic equities, and now sits in second place with respect to longer-term relative strength. 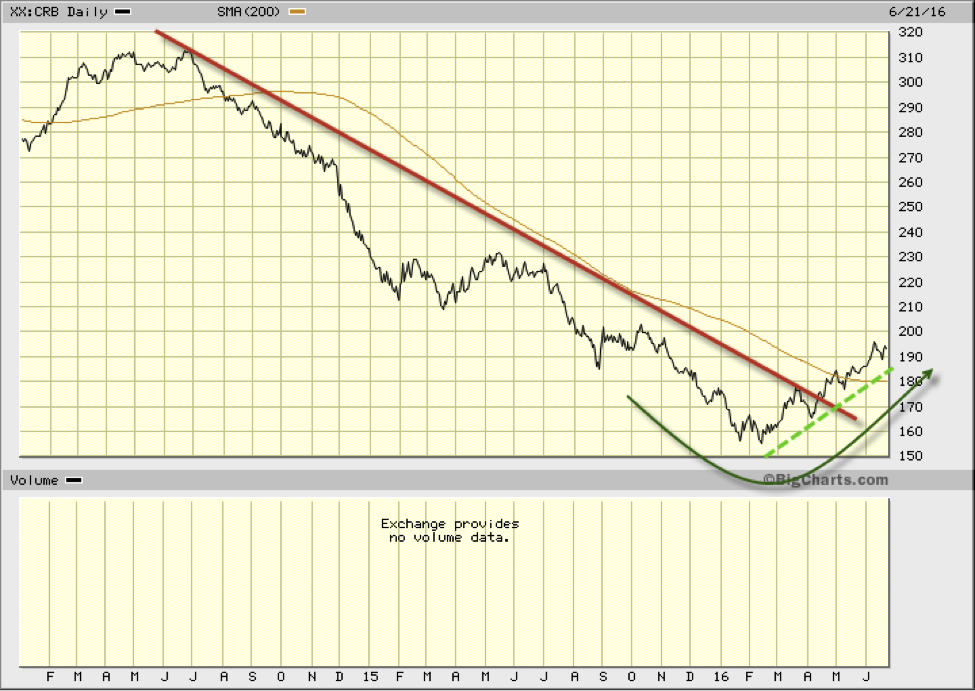 After a protracted downtrend, you can see that the trend turned from bearish to bullish earlier this year.

These long-term shifts don’t happen overnight, and when they do, it’s time to take notice.

You see, commodities and commodity-related stocks and ETFs have been some of the top performers of 2016. It’s hard to argue that this asset class has seen the highest returns in the short to intermediate-term.

Now, it’s important to note that many investors believe that this reversal is largely due to short covering, and that weakness will soon resume.

But when you see this monumental shift in relative strength with respect to the longer-term, it’s likely signaling that a significant shift in leadership is taking hold.

How long is impossible to forecast, but as long as the commodities asset class remains favorable, it’s become a compelling development that simply can’t be dismissed as transitory anymore.

Now, when we dissect the market into 41 narrow sectors, you’ll find that several commodities-oriented sectors are lurking near the top of our relative strength rankings list.

We’ve alerted you to several of them, such as the Gold Miners and the Oil & Gas producers, in previous issues.

But recently, we’ve seen one in particular hit the top spot — the Steel/Iron sector.

And this development could provide your next opportunity to profit.

There are few ways to get bullish exposure to this sector.

The most conservative approach would be through an exchange traded fund on the sector, such as the Market Vectors Steel ETF (Symbol: SLX): 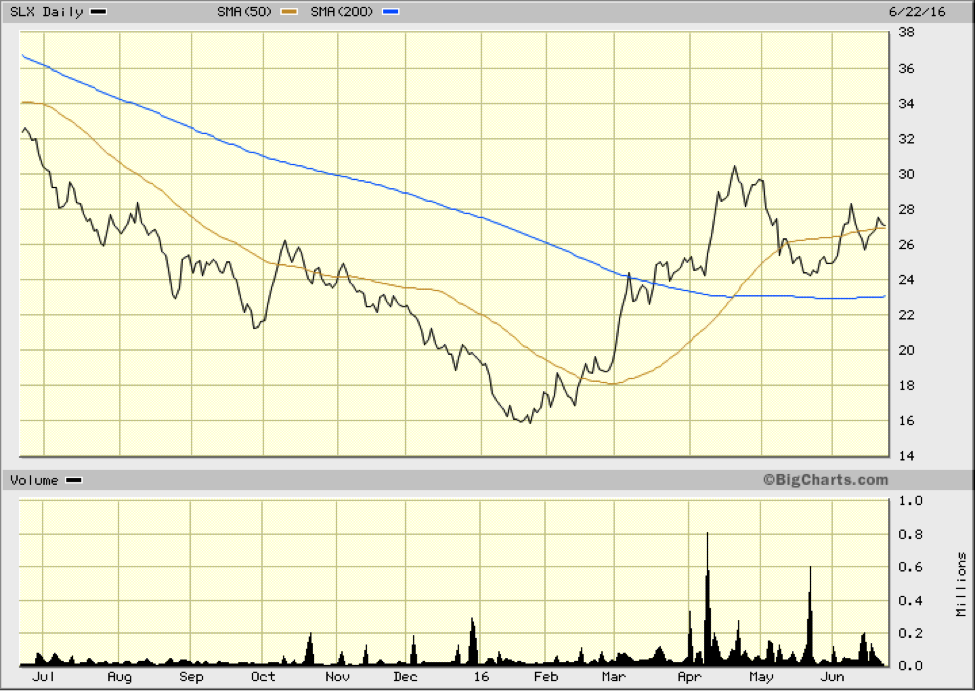 Another approach you could take is to identify the strongest stocks in the sector that are demonstrating positive relative strength.

But one stock in particular sticks out to us as “best in class” with respect to relative strength.

On a technical basis, the stock is hitting on all cylinders with respect to relative strength analysis. And as long as these positive attributes remain intact, the stock should continue moving higher from here.

With the stock recently trading around $25.25 per share, the stock is now testing a major resistance level. If broken, we could see the stock climb to its previous all-time high of around $40. 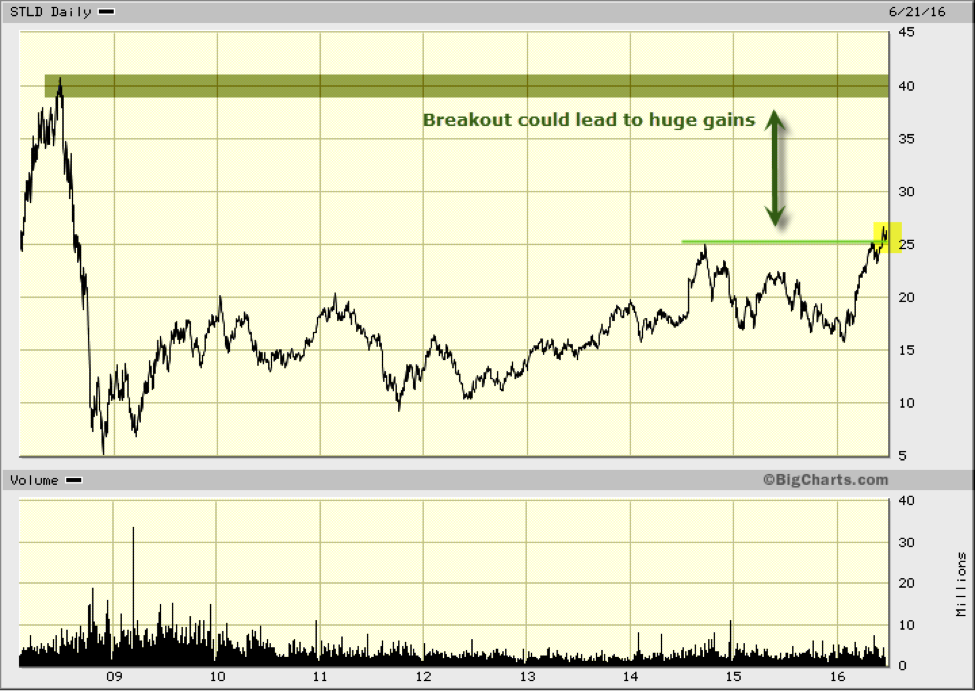 For every 100 shares of STLD you would normally consider buying, it would cost you $2,525.

Or, you could consider purchasing the STLD November 22 strike Call option for $4.00, or $400 per contract instead.

Each contract controls the same 100 shares of stock, but your cash outlay is 85% less!

What this means is you’ll still get unlimited upside exposure, but at a fraction of the cost.

That’s the power of leverage — creating a similar sized position, but with less risk.

And if the stock should indeed move higher from here, the break-even on the trade is $26.00 — or only $0.75 from the recent market price.

So that means you’ll gain dollar for dollar from that point higher.

In other words, from $26 and above, your option will gain in value just like the equivalent stock position.

So you can see how the stock replacement strategy can be a superior approach to make your money work harder for you.

We’ll keep an eye on the trade and revisit it in a subsequent issue.