Big Bill here - thanks for stopping by.

In last week's conversation I introduced you to what I think will be one of the biggest stories of 2020.

As you saw last week, that's more than just my opinion.

Since November I've been in contact with shipping magnates... CEOs... Senior VPs of tanker companies... product brokers... and analysts at hedge funds.

Nearly to a man the word is: the industry is in for 12 -18 months of increasing revenues and general good times.

In a nutshell, demand for refined products is increasing in the short-term thanks to the colder months. And it's increasing globally in regions like Latin America.

Plus, the Saudis (and others) are bringing more refining capacity online which translates into greater demand for clean product tankers.

And the U.S. is about to become a net exporter of energy.

In lockstep with all of that we have (in the short-to-intermediate term) a decreasing number of vessels capable of transporting that product.

On top of that we have a new environmental regulation called IMO 2020 which is putting a host of shippers at a competitive disadvantage. (For more detail refer to last week's briefing.)

One executive told me last month that “Now, when we look at supply it’s the lowest it’s been in 20 years. Each day that goes by that people don’t order new ships, we get pretty positive on the supply side.”

So how do we play these developments?

I'll answer that after a brief market overview.

The market is still strong in the longer-term and still overbought in the short-term.

The New York Stock Exchange BPI (NYSE BPI) filled a new, higher box (purple arrow) in its current X-column, bring the indicator that much closer to overbought territory (the light red region above 70%). 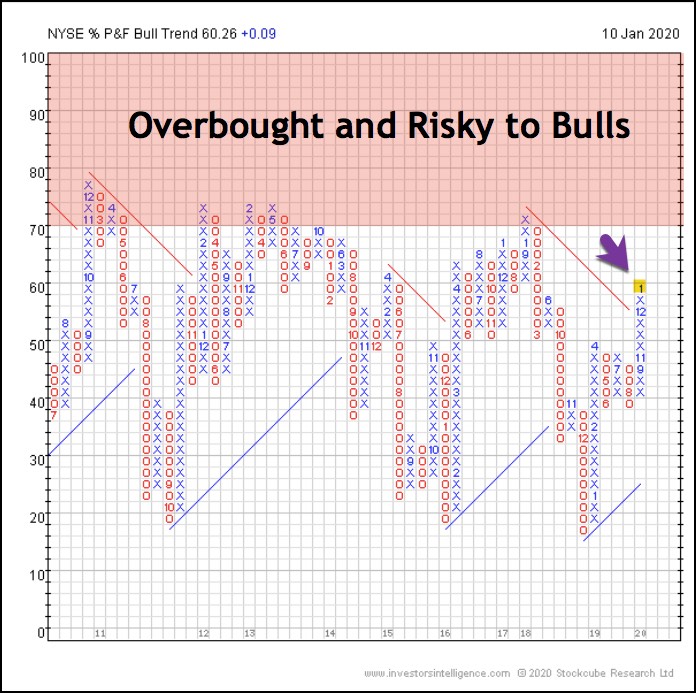 At the same time, the shorter-term (faster moving) indicator -- the NYSE %30-Week -- is now slightly less over bought.

Here's this week's view of the %30-Week. The arrow shows the current highest X-box that's been filled. 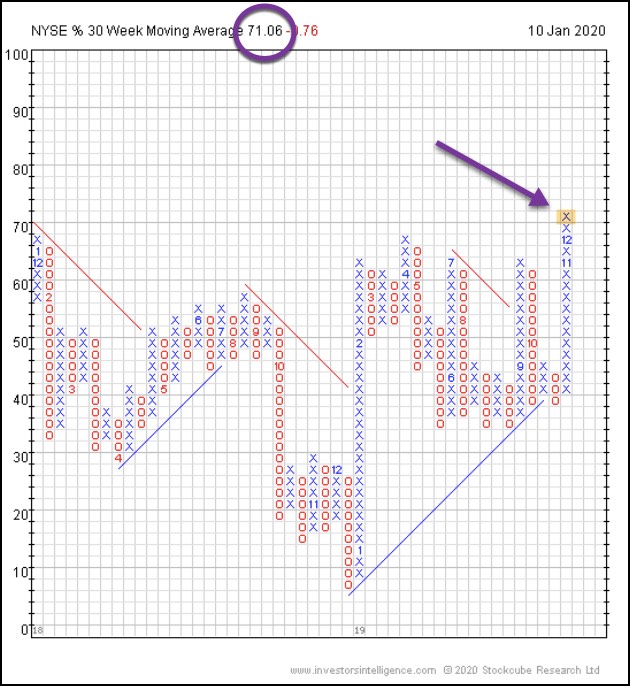 As you can see from this screen grab of last week's chart, they're the same. 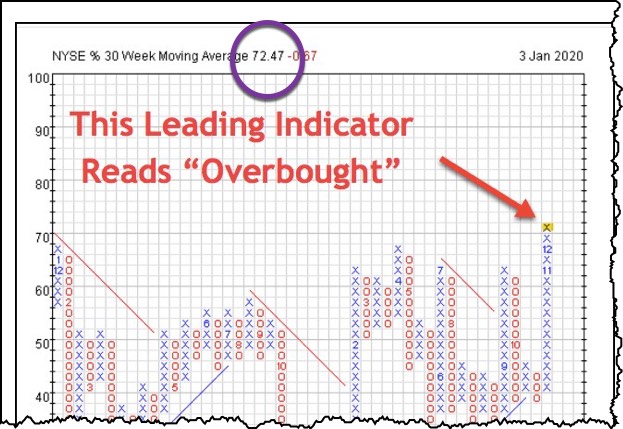 But notice the purple circles in both charts. Last week the reading was 72.47, meaning that 72.47% of stocks on the NYSE were trading above their 30-Week moving averages. Overbought.

When the market is strong in the longer-term (like this one), pull backs represent buying opportunities because they allow traders to get in at attractive prices.

International Seaways, Inc. (INSW) is one of the largest tanker companies worldwide. It owns and operates a fleet of seagoing vessels that transport crude oil and refined petroleum products.

In addition to the 42 tankers the company maintains, it also has ownership interests in 4 liquefied natural gas carriers.

INSW has gotten ahead of the cyclical curve that characterizes the tanker industry.

For one thing, it used the recent downturn to acquire newer vessels and to sell off older ones. It also sold some non-core assets (primarily a liquid natural gas or LNG joint venture) and used the proceeds to pay down debt.

And it is well-poised to capitalize IMO 2020.

Shipping companies face two choices when it comes to complying with the regulation: either stock up on new, compliant low-sulfur fuel or outfit their vessels with "scrubbers".

INSW did both. During the autumn, the company stocked up on low-sulfur fuel before the price rose...

And it has already installed scrubbers on 10 of its vessels.

Here's a daily chart of INSW. The stock is up 92% since August 8th.

After gapping 15% higher on October 7th on heavy volume (blue arrow), INSW gained 32% before pulling back about 7%.

When the stock gapped, it pierced a years-long historical resistance level near $24. You can see that on the 3-year daily chart.

Right now the stock trades at $29.08 and we're NOT going to buy in right away.

Reason being, the market is overbought in the short term, so pull backs are expected. And a we said a moment ago, because the market is strong in the longer-term, we're going to use any selloff as an occasion to acquire assets at a discount.

The fundamental story in the tanker industry is rock solid -- it is entering a bull market.

That said, we're seeing elevated tensions in the gulf and the so-called "war premium" that shippers pay to acquire insurance are elevated.

Finally, the Farmer' Almanac says we're having a "milder than normal" winter, which can suppress demand for refined products.

So let's watch this stock and not get in until it reverses higher after settling down. It could test support at its 50-Day MA (currently $27.39).

If it bounces off that support level I think it easily goes back to the recent high above $31. That's a nice 13% gain in a very short time.

See you next week,