Do Retailers Spell Doom for the Economy?

The retail sector has been taking a beating this earnings season.

You see, the retail and textile apparel sectors have been two of the weakest sectors in the market, and until these groups re-emerge with relative strength, it’s best to stay away from the group.

Yesterday, another big box retailer whiffed badly on earnings and even lowered its profit forecast for the current quarter. This, of course, is Target (TGT) and as of this writing, the stock is being punished, dropping more than 10% on heavy volume.

Today, WalMart (WMT) reported and, based on what we’ve already heard from Target, it too has likely posted underwhelming results ahead of the opening bell. Yesterday, the stock was trading lower by 3% as if it knows it’s going to get punched in the face.

Perhaps knowing in advance that you’re going to get hit can take the sting out of today’s session.

So with so much carnage among the retailers, what is it saying about the health of the consumer and the overall economy for that matter?

I mean, with gas prices dropping significantly and non-farm payrolls adding 150,000 or more new net jobs on a monthly clip, you’d think folks would have flocked to these stores in the first three months of the year.

But the “buyer’s strike” in this sector really seems to have spooked market sentiment of late.

Could this be a harbinger of a nasty economic downturn?

Will we begin hearing the chatter of the nasty R word?   (Recession)

But from our perspective, it’s too early to make that call.

You see, the consumer is indeed vital to a healthy and vibrant economy.

That’s undeniable, because consumer spending makes up about two-thirds of total U.S. output as measured by Gross Domestic Product.

And while the retailer and textile apparel sectors are showing relative weakness, it doesn’t necessarily mean that consumers are not spending.

Last week, I mentioned that the strongest broad sector in the S&P 500 was Utilities when measured against the other eight sectors.

The next strongest sector is Consumer Discretionary.

So in a sense, folks might not have been rushing to the retail outlets snapping up a bunch of suits, sweaters and coats.

But they are opening their purses.

And in contrast to the apparel retailers, these two companies not only exceeded earnings and revenue expectations for the quarter, but raised earnings guidance for the full year.

Two weeks ago I alerted you to the fact that the price action in the chart of Home Depot was demonstrating strong relative strength versus the market and its sector.

I even recommended selling the May 130 Put option for $1.50. As of yesterday, the option contract was trading for less than $0.25, netting you a very healthy return. If the stock remains above $130 by the end of the trading day tomorrow, the contract will expire and you’ll realize the entire premium, which turns out to be 28% annualized gain.

Earlier this week, we received two economic data points that support the relative strength we’re seeing in the sector.

The first was the Housing Market Index, which is a sentiment indicator based on a survey from members of the National Association of Home Builders. And the current reading was positive, holding steady at 58 in May. Readings above 50 reflect optimism about the industry among the home builders.

The second was the reading on Housing Starts or residential dwellings (both single family and multi-unit) that began construction last month. And in April, new construction rose 6.6% to an annualized rate of 1.172 million new homes. The pace of new home construction is within a few thousand units of hitting a new recovery high since the housing crash eight years ago. 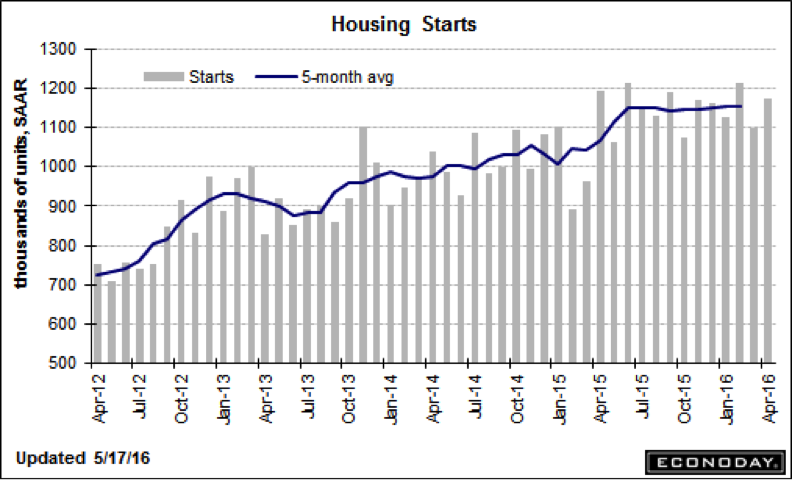 Here are three ways to play the Home Builders

One way to get bullish exposure to the sector is to buy a basket of home builders through an exchange traded fund.

The iShares US Home Construction ETF (ITB) is currently exhibiting positive relative strength versus the overall market as well as a constructive bullish trend in the price chart. It’s been a big performer since the correction lows earlier this year, and the short-term pullback from its recent high can provide an attractive entry point. 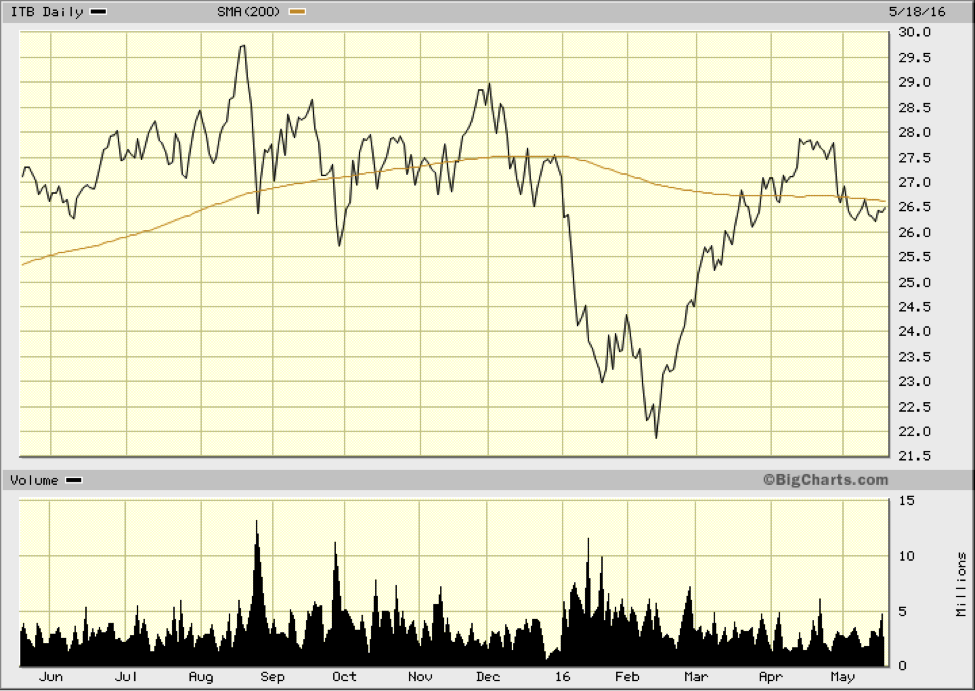 Another way is to target a specific company within the Home Building sector. If you’re inclined to pick an individual security, then you could consider D.R. Horton (DHI).

The company is one of the largest residential home builders in the U.S., operating in 27 states and over 79 metropolitan markets.

And right now, DHI is exhibiting very favorable relative strength characteristics versus the market as well as against its sector peers.

D.R. Horton is “best in class” in the Home Builders sector 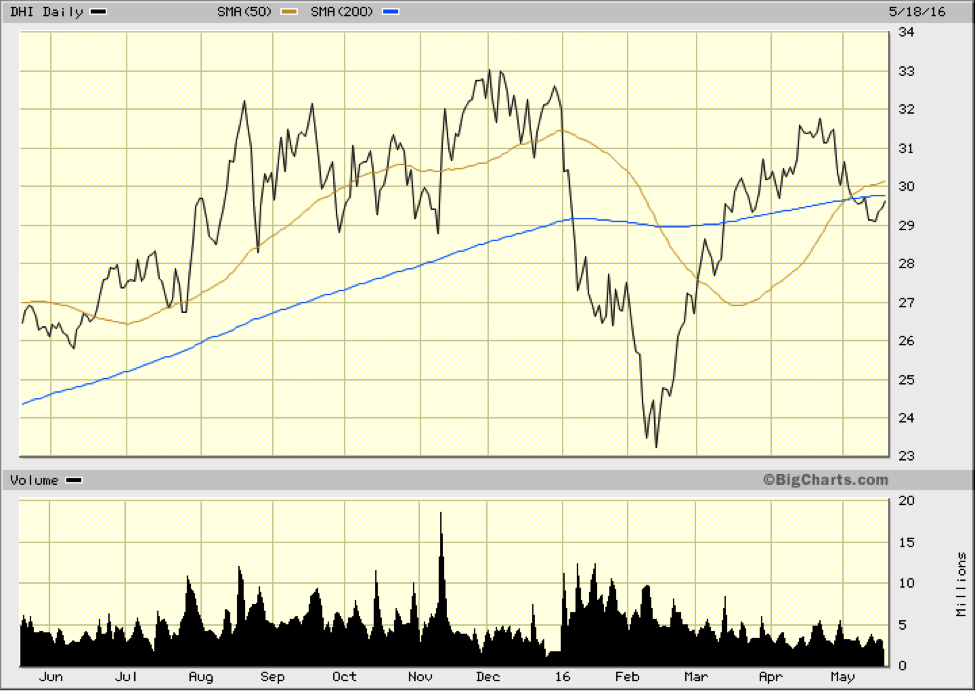 The company is not a home builder, but rather a manufacturer and distributor of building materials. It makes products such as wallboard, ceiling tiles and roofing components — pretty much all things that are needed to build homes.

So if new construction and the housing market continue to gain traction, then USG should directly benefit and maintain its positive relative strength. In that scenario, there’s plenty of upside on the price chart from here. 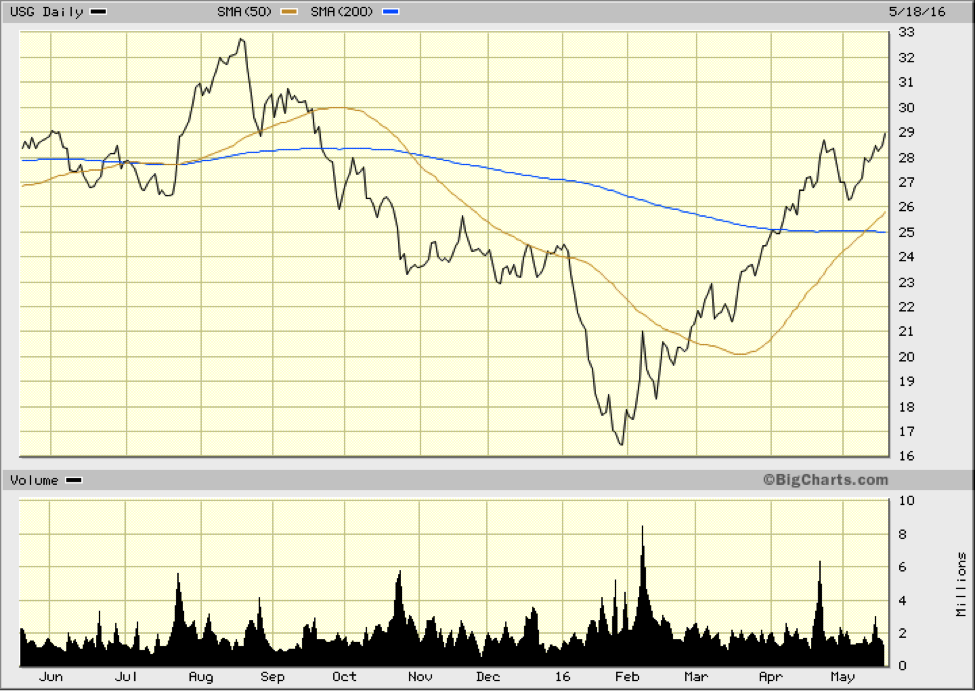