This Market is Clearly Overbought - Here's how to play it

It's the end of the decade!  Happy New Year. 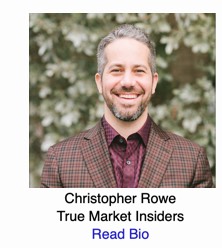 Hopefully you're reading this Monday Morning and not before a big market selloff. People tend to forget about the market in the last couple trading days.

The market is clearly overbought so I'm publishing a day early to get the word out to start hedging your positions.

You want to KEEP the money you've made with us.

To get the complete picture, let's start with going back to September 10th, after the stock market was done having a month-long temper tantrum.

Investors sentiment was fearful and so I sent you an article saying "The Results Are in: Be Bullish". 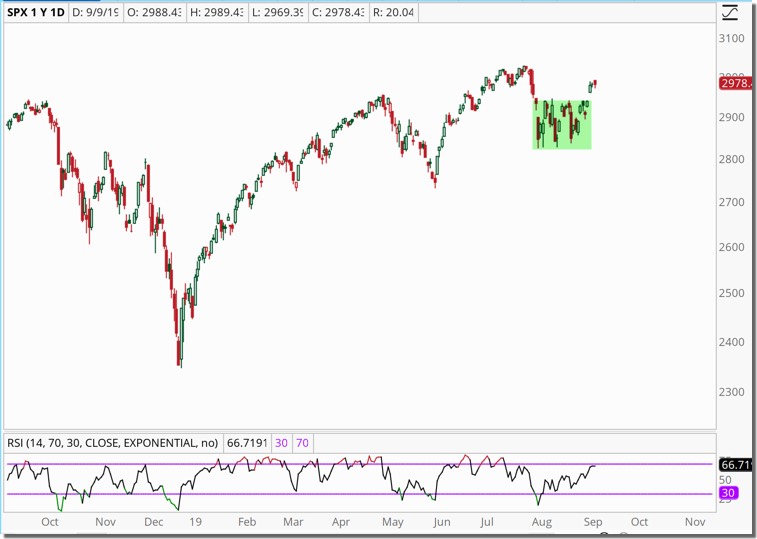 I posted this chart of the stock market, at the time.

Since then the stock market gained another 9% and the sectors we've recommended to our members have tripled that return.

Why is the stock market technically overbought and due for a pullback? 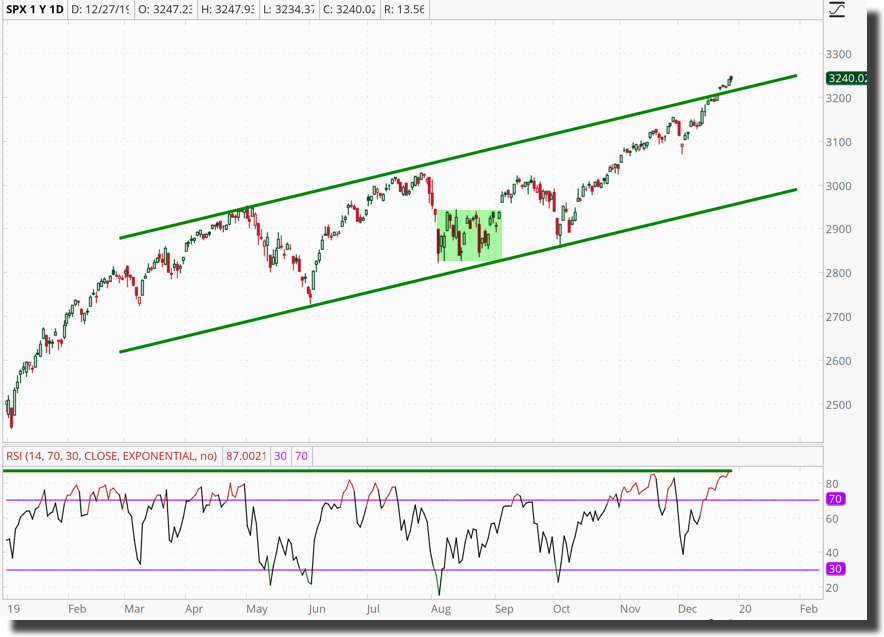 For one thing, the stock market is now above its upper channel-line, which chartists refer to as the "return-line" for good reason:  It's usually the point where the stock or index reverses and returns to the mean (average price range).

The technical implication, when this happens:  SOMETIMES it means the uptrend has decided to steepen, adding more upward momentum to the price-chart.

But the majority of the time, it indicates that prices are exhausted and need to either reverse lower or move sideways in a zig-zag pattern to digest the recent gains.

The way to gauge whether the penetration of the return line is more likely to result in increased upward momentum (steepening of the upward move) or a price reversal is to consider how steep the uptrend already is.

The steeper it is, the more likely it's ready to reverse lower/sideways.  And in this case, the uptrend was already pretty steep. Look for a reversal.

I'm just saying it's a great time to start hedging your stronger positions and definitely selling positions that have underperformed the stock market's recent returns.  Those are the stocks that tend to be punished the most during market selloffs. 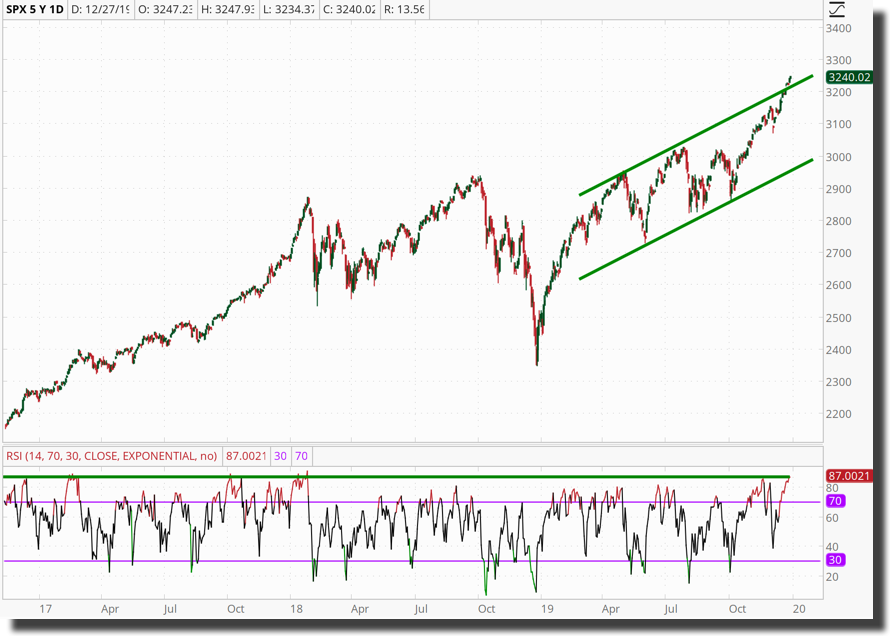 Above is a 3-year chart of the stock market.  At the bottom you'll see the exponential RSI where I drew a green horizontal line from its current level on back.

2017, was a but of an exception.  Everybody got a little crazy in terms of market sentiment. Trump had gotten elected and everyone knew it was good for the economy (though not everyone would say it out loud).  And you'll see that the RSI reached high levels but the stock market kept going higher.

The overbought RSI is merely a red flag and not always followed by a price reversal. This is the exception and not the norm. 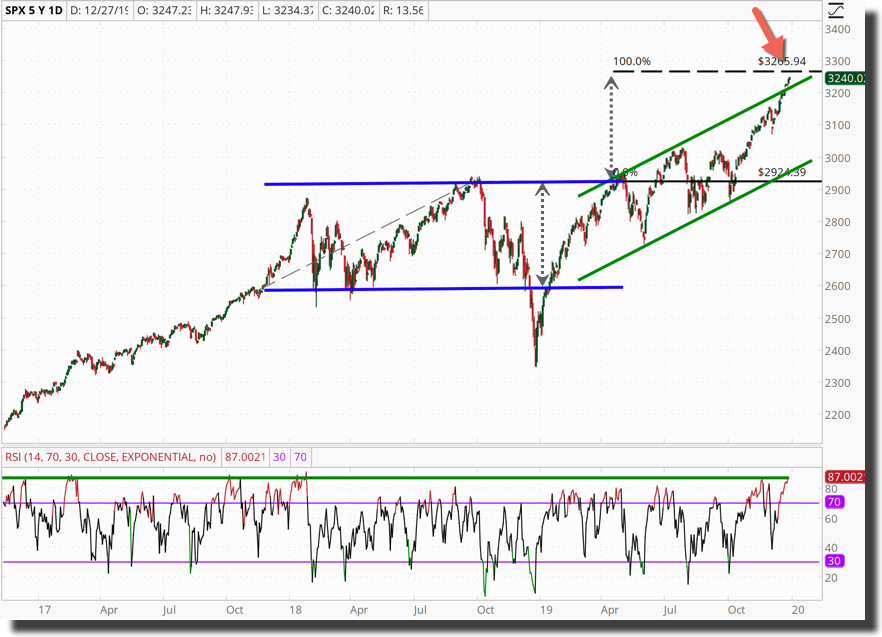 Also, when we measure the general trading range from October 2017 through April 2019 (blue lines), we can measure that same distance from the breakout point (black double arrows), which is usually going to be where an index finds resistance.  We have just about reached that point.

There are many other technical reasons the market is overbought but I'll be showing the rest of them to our paying members.

This was just a small taste for the True Market Insider free e-letter.

The bottom line is we are technically overbought.  I'm not at all interested in the fundamental arguments being made, such as the popular theme about lowered earnings estimates.

They can be countered with positive fundamental stories like the U.S./China trade deal and lower interest rates.  What matters to your investment portfolio is the physics of the market (the technical picture).

The way to play the current situation is to exit any stocks that haven't been performing well, so that you have some cash on the sidelines to redeploy when prices of the strongest stocks do pull back.  You'll want to buy into the stocks that showed the best performance in this upswing.

You want to also sell covered calls to take some income from your existing positions without selling them.  And you may want to consider buying small put option positions, either as a way to protect your current bullish positions or on separate stocks that you think are likely to trade lower, even in the face of a continued bull market.

The key here is to stay safe and to have cash when the market sells off.  We are still in a long-term bull market and the pullback or dip is not going to be the beginning of a new bear market.  It's just going to be a buying opportunity.