Here’s Why This Leading Sector Has Staying Power…

The 142nd running of the Kentucky Derby was this past weekend.

And the favorite, Nyquist, claimed victory by capturing the first leg of the “Triple Crown”. The three-year old colt is actually off to a great start, having won all eight of his races thus far.

Had you wagered $2 on these two horses finishing first and second respectively, the “exacta bet” would have returned $30.60 on your investment – not too shabby.

Turning to the financial markets, one particular sector has been on its own kind of winning streak, racking up big gains since the beginning of the year.

And you’ll probably be surprised to hear that it’s the Utilities Sector.

No joke; the often perceived dull and boring sector is actually blistering the pack.

In fact, the Utilities sector is up 13.5% year-to-date and is outpacing the next best gaining sector by more than five percentage points.

And aside from absolute price performance, the Utilities Sector is the top rated with respect to relative strength versus the other eight broad sectors that comprise the S&P 500.

So in a sense, the Utilities sector has been the “exacta bet” winner for 2016 thus far.

But as they say, “past performance is not necessarily indicative of future results.”

And while that statement is an undeniable truth, what we’ve also found to be true is that individual securities and groups of securities that exhibit the strongest relative strength tend to continue to outperform going forward.

And right now, the Utilities sector is performing like a thoroughbred.

Utilities tend to be a defensive sector. So it’s no real shock that the sector got a big boost at the start of the year as money rotated out of risk assets during the January/February correction. Utilities are an attractive safe haven during times of heightened volatility because of the predictable business model and relatively high dividend distributions.

However, after the broad markets bottomed, the March/April period produced a huge bullish reversal off those lows and propelled the major stock averages to within a couple of points of the previous all-time record highs achieved last year.

The Utilities Sector also participated in the rally, right along with the risk-on associated assets such as technology, industrials and commodity related sectors.

The answer lies in the relationship that Utilities have with interest rates.

You see, the Utilities business is capital intensive and reliant upon debt to grow its business and fund the generous payout distributions to shareholders.

And right now, it seems as though the Federal Reserve is blowing with gale force winds at the backs of the Utilities.

As you’re probably aware, the Federal Reserve raised interest rates by 25 basis points at its December meeting. It was the first policy move to begin the process of normalizing interest rates after keeping the benchmark rate pegged toward zero percent for seven years.

And at that meeting, the rate-setting committee had forecasted that interest rates could be raised another 100 basis points by the end of 2016.

The prospect of rising interest rates, although still considered relatively gradual, is not the best outcome for Utilities, and is likely the reason for the sluggish sector performance leading up to and shortly after the December FOMC meeting.

But as I mentioned, the market sell-off at the start of the year changed the dynamic as money shifted into the Utilities sector.

And the follow through in relative and absolute strength since the market rebound are what is most compelling.

You see, when the Fed met again in March to decide on interest rate policy, the meeting actually turned out to be a real game changer and a boon for Utilities.

Not only did it not raise interest rates, but the committee made a major forecast change by reducing its expectations of where interest rates will likely be for this year and next. It made significant reductions to the outlook, which sent long-term interest rates lower and rate sensitive assets like Utilities higher.

Currently, the 10-year US Treasury bond is yielding 1.75%, which is just about 40 basis points from the generational low achieved in 2012.

After the Fed essentially sat on its hands and held interest rates steady in April, the committee will meet again in June, which also is accompanied by updated interest rate forecasts.

But with the incoming weak economic data like the lackluster jobs report last week, Q1 GDP growth below 1% and inflation running meaningfully below target, the Fed is likely to hold off on another rate hike. That leads to September as the next opportunity to move on interest rates, but comes within weeks of the presidential general election. Raising interest rates that would affect millions of (voting) consumers is a circumstance it would prefer to avoid if possible.

So that would leave December as the most likely meeting for the next interest rate adjustment, providing the economic data warrants it. In other words, we should expect lower interest rates for longer.

How to take advantage of the Utilities sector:

The broadest way to get bullish exposure to the Utilities sector is through an exchange trade fund. You could consider the SPDR Utilities Select Sector Fund (Sym: XLU).

The XLU has a positive price trend and could be purchased on subsequent short-term weakness. The ETF also distributes a periodic dividend distribution that is currently yielding 3.27%, nearly twice the yield of a 10-year US Treasury bond.

The price trend remains intact unless it falls below $45.50, which would likely coincide with a sector relative strength reassessment. 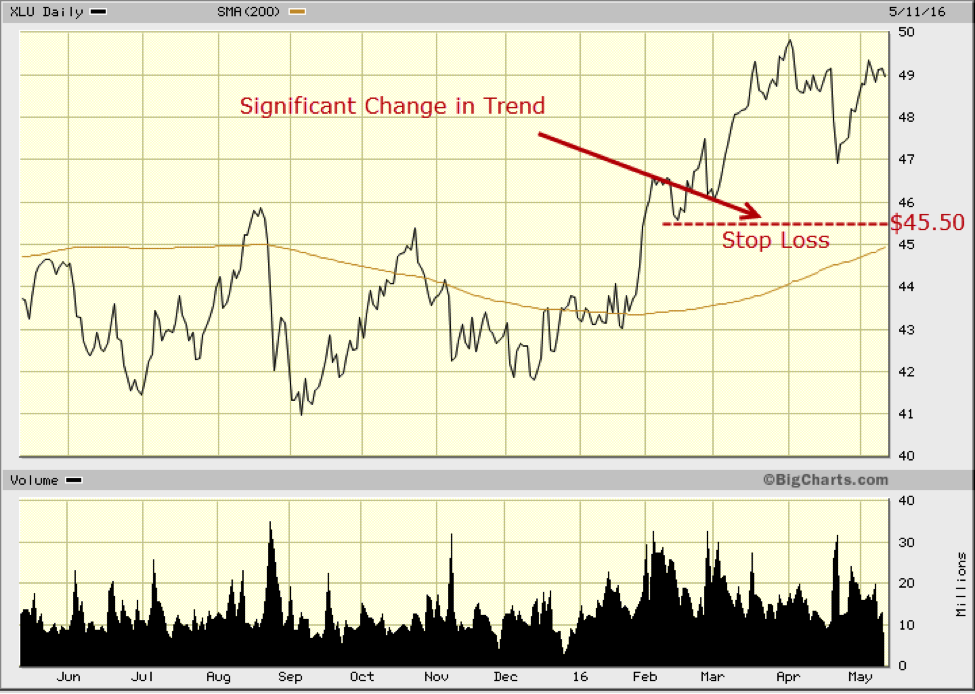 Digging a little deeper within the sector, you could consider taking long positions in individual securities within the Utilities sector.

According to our research, there are a few standouts that are exhibiting positive relative strength across several attributes we like to track.

NextEra Energy (Sym: NEE) and American Electric Power (Sym: AEP) are among them. Both companies recently reported earnings results on April 28, and the price action on both has been positive. They both distribute dividends with an annual yield around 3%, which adds value to the investment.

Nyquist will go for his ninth straight win and try to capture the second leg of the “triple crown” at the Preakness Stakes on May 21. Will he keep the winning streak alive or be denied?

We’ll know for sure in less than two weeks.

As for the strength in the Utilities sector, we don’t have the luxury of a definitive date and time, but what we do know is that we have metrics and access to data points that will tell us when it eventually falls out of favor.