Is THIS why you THINK the market's overbought?

Do you think this market is overbought?

Before I write my piece, take a look at this one year chart of the stock market (S&P 500) and submit your opinion in the poll below it. 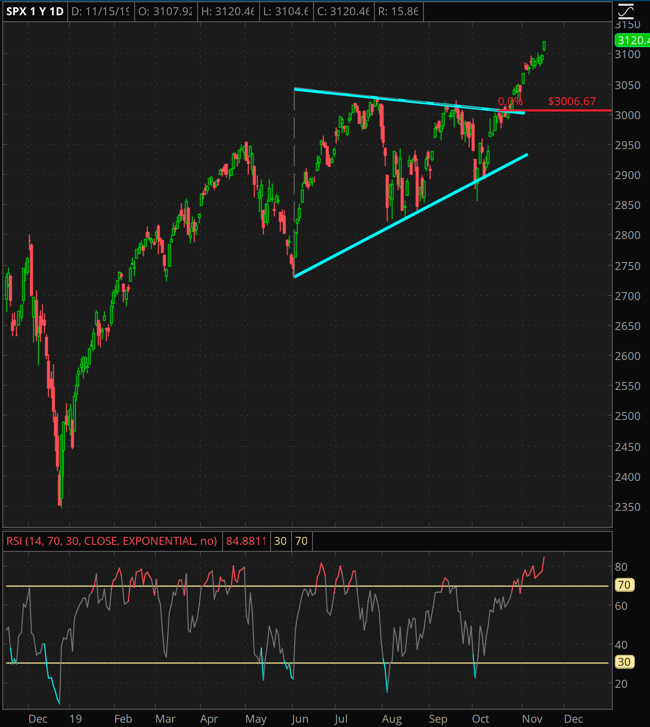 Do you think the stock market is overbought?

This is our first article poll.  Hope it's fun!

By the way, you probably know Investors Intelligence and a few other organizations take a weekly poll, asking the same question.  And it's used as a contrary indicator.

So if more people say we are overbought then we likely aren't and vise versa.

If you're a technician, then you've noticed the RSI, at the bottom of the image, below the price chart of the S&P 500.

If you're a good technician, then you know the RSI being overbought is definitely not a sell signal.

The sell signal is when it moves from above 70 to below 70.  More importantly, the RSI is best used for entry signals in the direction of the trend.

The trend is up at the moment.

That means an "entry signal" is to buy the stock (as opposed to sell it short).

At this point an RSI a sell signal wouldn't be considered anything to worry too much about.

The caveat is if we were to see a "negative divergence" before a sell signal, that would be a big warning sign. (Negative divergence is when the price chart makes a higher high as the RSI makes a lower high.)

So the answer to the question - from MY perspective anyway - is "yes"... technically we are overbought... but overbought doesn't mean over.

"Overbought" can be a tricky term for those who aren't into technical analysis. The word is scary. So investors get scared and sell out of their stocks and miss a nice run higher.

Markets make the biggest, fastest, strongest price advances while they are overbought.

Let's just go back a couple of years for context.

First, above is the chart we've already seen.  And below will go back to 2017. 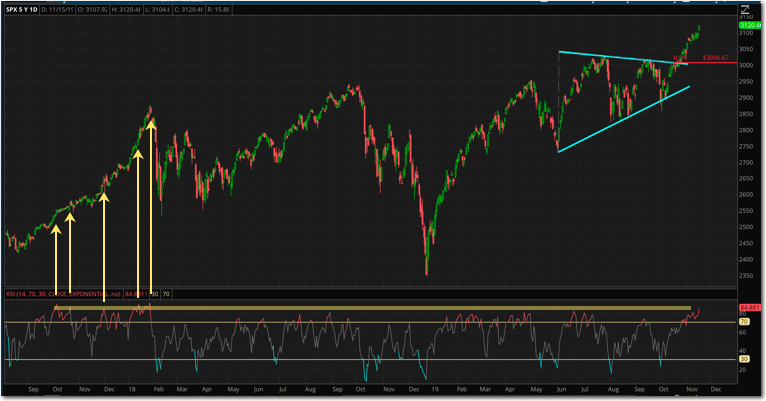 Look at when the RSI moved up to the level it currently is at, back in 2017.  I drew yellow arrows to show you where the market was at the time.

It looks like the RSI being overbought is actually a signal to buy!  And it is, depending on the type of investor you are.  You just have to know the game you're playing or the market environment you're playing in.

I wrote an article a few weeks back about the triangle before we broke out (blue recent).  And I said the minimum price objective was 10.5% higher and the chart formation means the expectation is that it happens within about 5 months. 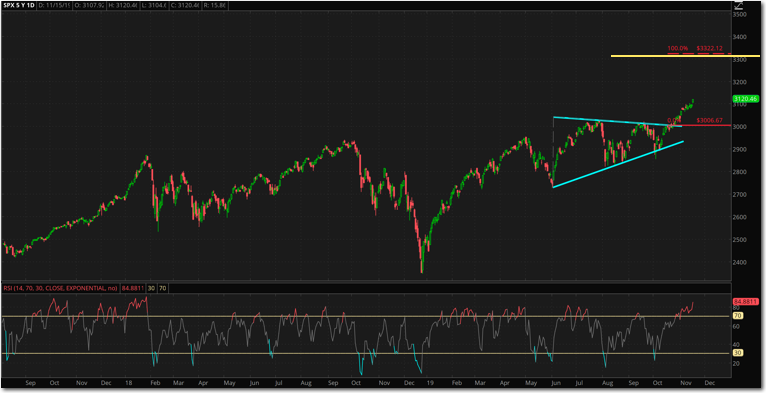 Here ya go. I made a similar chart.  You can see the price target a little better since I drew the yellow line.

I think the stock market has a great chance of hitting that... approximately... in 4-5 months.

I'll Prove That This is What You Should Do

Dorsey Wright Nasdaq, a great technical analysis based firm, conducted a back-test study regarding buying leaders (stocks that outperform the market and other stocks, verses laggards).

I'll discuss it below, to prove why you should be buying things that are outperforming the stock market.

It's definitely the cornerstone of my personal investment philosophy. And it's been proven more than any other "factor" in existence.

A stock or sector showing relative strength means what it sounds like - strength relative to something else.

It then tallies up the number of other issues that "issue-1" is stronger than, and it assigns "issue-1" a score.

It tallies up the same thing for issue-2 and assigns issue-2 a score.

Basically it allows us to rank the sectors by relative strength.

Dorsey entered 30 State Street sector funds into a relative strength matrix.  So again, it compares all of the 30 sectors to each and every one of the other sectors, one by one.  They are ranked 1 - 30. 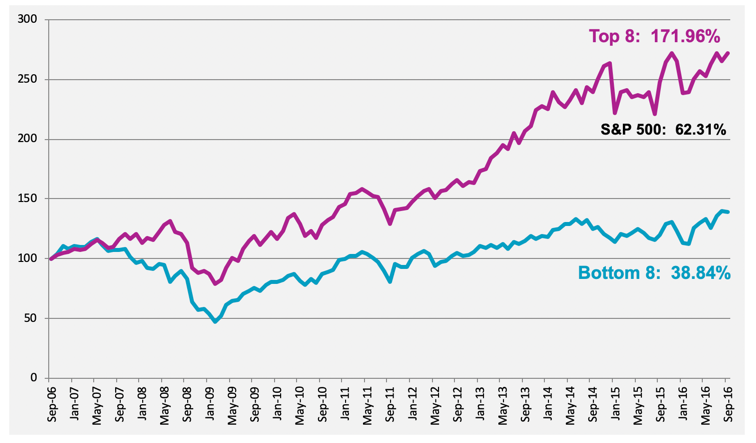 The back-test, as you might have guessed, creates two "portfolios" and charts the performance.  One of the two portfolios owns the 8 highest scoring sectors and the other owns the bottom 8 scoring sectors.

The universe of 30 sectors were evaluated monthly.  So the theoretical "portfolios" are rebalanced so that each month they own the top 8 and bottom 8 even after the rankings change throughout the month.  The data range is from 9/29/2006 – 9/30/16.

I don't know if I even have to continue typing.  You get the point, right?

I only said "almost every single time" just to be safe. I can't remember a time when it wasn't exactly like this.

The market is breaking all time highs.  You just have to focus on the specific issues (stocks of funds) that have been outperforming.

But yes, the general market IS overbought. Here's a neat little trick you can use...

I drew a long-term trend line from the Feb 2016 low.  That's the last time the market was what we at True Market Insiders call "washed out", since it was washed out last December 2018.

We start there because it's a MAJOR historical situation for the stock market. (If you want, you can start the line in November 2016 when Trump got elected).

We connect the higher lows and extend it further out.

Notice that, once it's violated in October 2018, the market rises again and it becomes the new resistance level.

So expect it to continue to be a major rising resistance level.  I hope this helps your investing and trading. 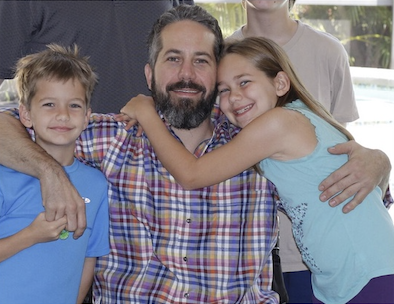