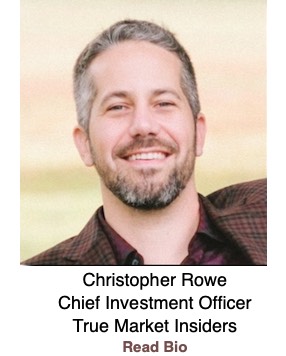 I'm writing this on his behalf because he's quite busy preparing something else for you, which I'll share a minute.

Bill brings you investment ideas in companies that he gets to know pretty well.

Today I'll come at you from a technical perspective and speak generally about small-caps.  Then I'll give you an update on Bill and share what he told me about his next big stock idea.

If you're interested in focusing your investment capital on the strongest part of the market, you should be watching the indicators that paint the clearest picture.  Not just the popular stock indexes.

Our internal indicators show us the small-caps are more likely to advance and they're getting stronger, faster. 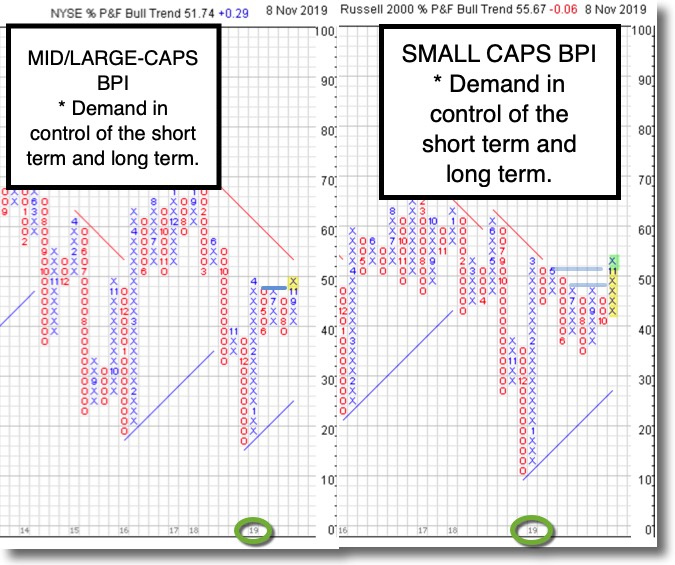 Let's check out the The True Market picture (market breadth/internals) of small-caps and the rest of the market.

I won't type out an entire lesson on the indicators.  You can learn more about the BPI at truemarketinsiders.com/bpi and majorbottom.com.

When the indicator is going up, it means more and more stocks are joining the bullish camp and the market is getting stronger and stronger.  More and more people agree stocks should go up.  The uptrend becomes more and more difficult to reverse.  (We have seen this more in small-caps than the others.)

I circled the year "19" in green (bottom) for perspective.  And within the chart you'll see numbers representing months.  In the current columns you'll notice an 11, for November.    The current/most recent column is the far right column and X-columns are created when the indicator is moving up significantly.

Both small-caps and others are showing demand in control of the short-term and long-term. While the short-term indicators say we are overbought, the long-term picture, as seen in the two BPIs, shows we still have a long ways to go before the bull market becomes exhausted.

These indicators tend to top out when they reach the 70s.  They're currently in the 50s.  So do note that there's a lot more long-term bullish upside to go through before the market starts to get exhausted.

The small-cap BPI shows a stronger picture than large-caps, which is not something that can be seen by comparing the popular stock market indexes.  If you compare the S&P 500 (large-cap) index to the Russell 2000 (small-cap) index, you'll find the S&P 500 has performed better.

(Same Charts for your convenience)

But using the BPIs allows us to see the true market.

The Russell 2000 small-cap BPI has crossed well above it's July high (notice the "7" and the horizontal blue lines).  That means, when it comes to the small-caps, there's a much larger number of stocks participating in the current upswing than had participated in the upswing that led to the July high.   That's a very positive sign.

But the NYSE BPI (mid-caps and large-caps), you may notice the chart has merely matched the July high.  That means approximately the same number of large-cap stocks are participating in the current upswing that had participated in the last one.  So this is not as strong as the small-cap situation.

Now lets look at the price indexes of small-caps verses large caps.  They actually paint somewhat of an inaccurate picture - the opposite. 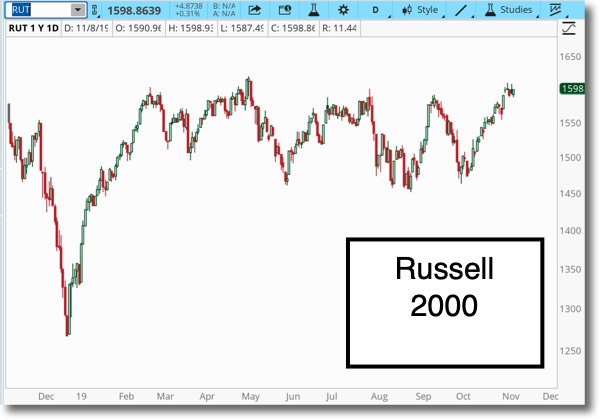 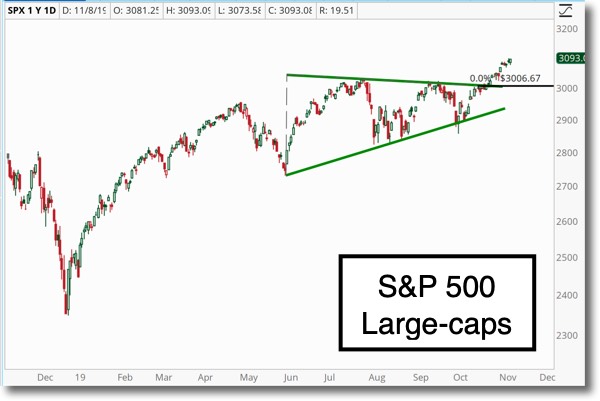 The large-cap S&P 500 broke above the July high.  But the small-cap Russell 200 remains in a sideways channel.

Do you see why it's important to view the True Market?

Now you know you'd rather be in small-cap stocks, assuming you're okay with the volatility.

I know what you're thinking. What about he S&P 500's Bullish Percent Index. 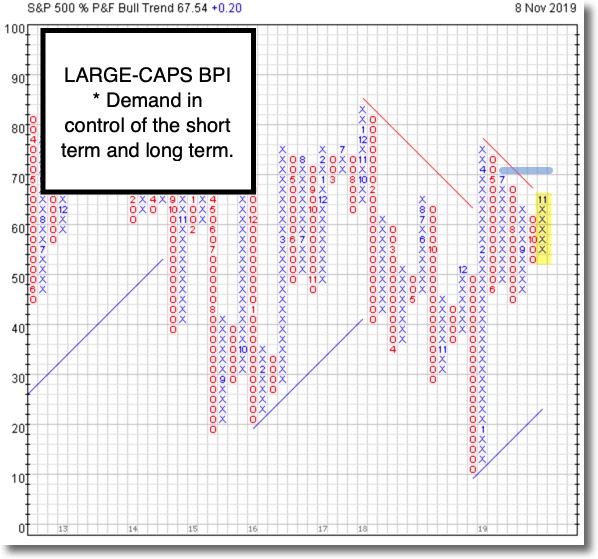 It hasn't even REACHED it's July high.  So it's even more of an opposite picture from what the S&P 500 price index shows.

So stick with small-caps if you're okay with volatility.  Stocks like Sapiens come to mind.  Remember in late July, when Bill Spencer recommended this in Small-Cap Saturday?

He spoke to management, he liked the fundamental picture and he liked that it formed a bit of an extended "flag". 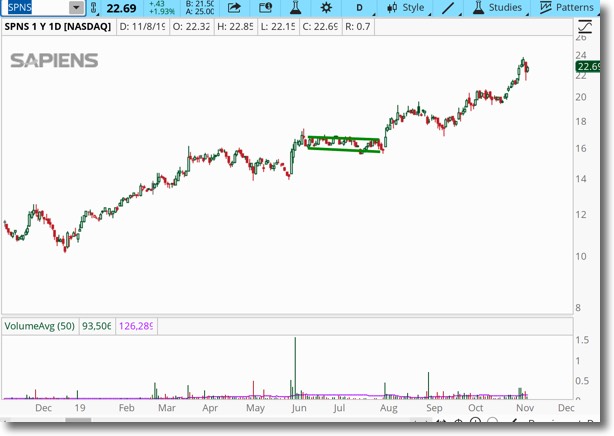 The stock popped before the market even opened the nest trading day, on an earnings announcement.  Bill said it would keep going for the next couple of weeks, and it did. He said to stay in the stock... I did.  It's gained 50% in under 4 months.

Bill's going to continue discussing small-caps with you but his investment ideas are moving to something called Founders Forecast. Currently it's only available to those who sign up for Tuesday's summit. So register even if you're not able to make it.

He's going to show you how to find amazing swing trades (time frame being days to weeks) and new earth shattering technologies on Tuesday's Technology Crossroads 2020 Summit.  (If you haven't signed up, then do so here.).

If you've opened any emails from me lately you already know...

Back in September, we sent out a short survey asking what you'd like to see from True Market Insiders.

The single biggest response said something like, "Please get Big Bill on the air".

I must confess that I did keep nudging Bill to share more of what he's doing.

He's given me some of my biggest winners, over the years.

In January, he gave me two stocks to buy call options on..

Bill always told me to keep his trades a secret because he isn't the type to want to go public with these things.  Otherwise I would have sent them to you, of course.

So over the years I've been asking him to start writing to you... and to start giving trade ideas.  He always said "Chris, stocks also decline. And I don't want to be the guy who gives a hundred thousand people a stock that goes down".

But his track record is impeccable.  I can't share it still, but I will soon. I am just auditing it to be sure it's 100% accurate.  But if you've been reading his "Small Cap Saturday", you already experienced Bill's capabilities.

His big fascination, lately, has been on small-cap stocks. More specifically, stocks of companies that are making technological breakthroughs.

He's what we call a swing trader and he also makes long-term investments that multiply his wealth every year.  It's crazy.

And so what I had done is, first, convinced him to write "Small Cap Saturday" to give you quick trades.  Since he started that in July, the S&P 500 gained 3%.

And second, I finally got Big Bill to "go public".

On Tuesday, November 12th Bill Spencer is holding an online investing event exclusively for my readers.  It's called the "Technology Crossroads 2020 Summit".

It's FREE and you can sign up for it by clicking here.

During the event Bill will reveal three groundbreaking technologies that are transforming he lives of people all around the globe.

Bill just got back from St. Petersburg finishing some cyber security research.

We sent him to "St. Pete's" because of something "Shark Tank" star Robert Herjavec told us at the Acronis Cyber Security conference in Miami Beach about a month ago.

Robert said, "We [the Cyber Security industry] are one of the few industries that has massive growth and extreme fragmentation. There is no 800 pound gorilla in this space”.

As sure as night follows day, SOMEONE is going to emerge as "king of the hill" in this soon-to-be $300 billion market.

And early investors in that particular company will see their lives change forever.  You just need to figure out who that 800 pound gorilla will be -- and then position ourselves to profit.

That's where Bill comes in...

Here's what he told me in an email form St. Petersburg:

"I already have a very good idea who that 800-pound ape will turn out to be.  I've been digging deeply into a small-cap firm that handles threat detection and response.

"Their clients are in everything from technology to energy, as well as manufacturing, finance, media and entertainment, healthcare, real estate, retail, government... you name it Chris.

"I'm very excited about this stock. The chart looks fantastic.

"Again, Cyber Security is turning into a gargantuan industry.  The fruit is hanging so low you could eat it off the tree without raising a hand.

"And it's just one of the technologies transforming the world right now.

"My contacts have put me onto a bunch of others."

I pressed Bill for more, and he said that, as an example, that some of the biggest companies in the world are rolling out technology that could completely change air travel as we know it.

We're talking about technology that'll give ordinary air passengers a way to fly "point-to-point" from their homes to their destinations, completely safe and hassle free.

I can confirm that every word of what Bill say's is true.

Electricity could soon become so cheap you'll cover 100% of your household energy needs with just a tiny monthly fee, like a Netflix subscription.

Bill alluded to this in "Small-Cap Saturday" two weeks ago.  Let me quote him...

He said that at the recent Mobile World Congress in L.A., "People are discussing these things in hushed tones".)

As I said, Bill is going to give you the lowdown on each of these developments on November 12th during his Summit.

I've spent 8 years encouraging him to swing out like this.  And believe me, you definitely need to be there when he presents his findings.