Small-Cap Saturday - This Biotech Is Up 135% (And Rising) 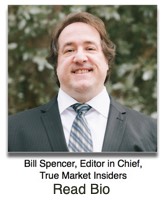 Thanks for joining us for today's "Small-Cap Saturday", the one thing on the calendar more fun than "Night-Cap Friday".

If you're new to this feature, thanks for looking in, and we hope you stick around.

The big news this week is, of course...

... that the American League again beat the National League in the Major League Baseball All Star Game.

And that's not all.

Because today you're going to discover a $1.3 billion biotech that's "doing well by doing good".

Thanks to this company's technology, more and more patients are being spared from painful, expensive and time-consuming procedures.

The stock (under $30) has already gained more than 130% this year -- and more than 400% in barely 15 months.  And as you're about to see, their price chart resembles an upward-climbing juggernaut.

Before we dive in to details, here's this week's...

The major market averages marched into record-setting territory this week.  On Thursday the Dow broke above 27,000 for the first time ever.  Wednesday the S&P hit an intraday high of 3002.88, and on Thursday closed at 2,999.91.

For its part the Nasdaq visited a new all-time high on Wednesday and finished the day at 8,202.53. 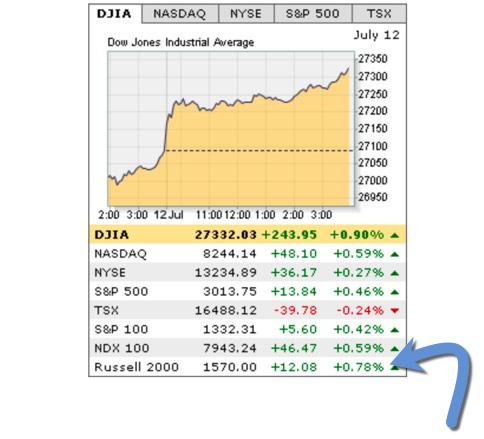 The major indices presented a bi-polar posture, with the mega-cap Dow and the small-cap Russell 2000 beating out everything else.

If you follow the markets, your inbox is probably filled with stories about how small-caps are underperforming.

With the small-cap Russell 2000 outperforming every index but the Blue Chips, we'll probably be seeing fewer stories like that.

And in an upcoming column, I'll show you why reports touting The Decline of Small-Caps are probably exaggerated.

Known as "Genomic Sequencing Classifiers (GNCs)", the three products are...

When used at an optimal point in the diagnosis/treatment pathway, Veracyte's tests can put patients on a much better treatment path.  This often means that patients do not have to endure frightening surgery and other painful and expensive procedures.

For example, each year more than 525,000 patients undergo a particular type of biopsy (called a "fine needle aspiration" or FNA)  to assess potentially cancerous thyroid nodules.  For 30% of patients, the tests prove inconclusive.  Until now, it was common for those patients to receive diagnostic surgery even though in 70% to 80% of cases the nodules turned out to be benign.

For lung cancer, which is difficult to diagnose early, as many as 80% of biopsies can give inconclusive results.  Veracyte's technology is getting better and better at weeding out those false negatives.

And as the costs of its tests get lower, the number of patients who can benefit from them will expand.

It bears repeating, this is the kind of company you want to get into early -- a company looking to unlock massive value by disrupting "the way things are".

According to Veracyte, "We believe the global market opportunity for our products is over $30 billion annually".

Bonnie Anderson, chairman and CEO told investors, "We delivered excellent results in the first quarter of 2019.  Product revenue and genomic volume both grew significantly in the quarter, and our biopharmaceutical service revenue exceeded our expectations.  We also demonstrated financial discipline, improving our cash used in operating activities by 86%.”

Anderson added that the company expects to achieve operating cashflow breakeven by the end of this year.

This small-cap stock has friends in high places.  Institutional investors have been buying in bulk, something every small-cap investor loves to see.

According to Reymerlyn Martin at Insider Monkey (a website that tracks hedge fund buying and selling), "There exists an 'upper tier' of noteworthy hedge fund managers who were upping their stakes significantly (or already accumulated large positions)" in Veracyte.

There's more good news. Since most of a stock's performance (or lack thereof) is due to the sector it resides in, it's great for us that...

Veracyte Is In A Top-Ranked Sector

Currently, the Healthcare sector is ranked #4 in our sector rankings, just below Oil Services, Internet and Precious Metals.

Healthcare's BPI is currently in a column of X's, a sign of short-term strength...

And it's on a point and figure (P&F) Buy signal -- a sign of longer-term strength. 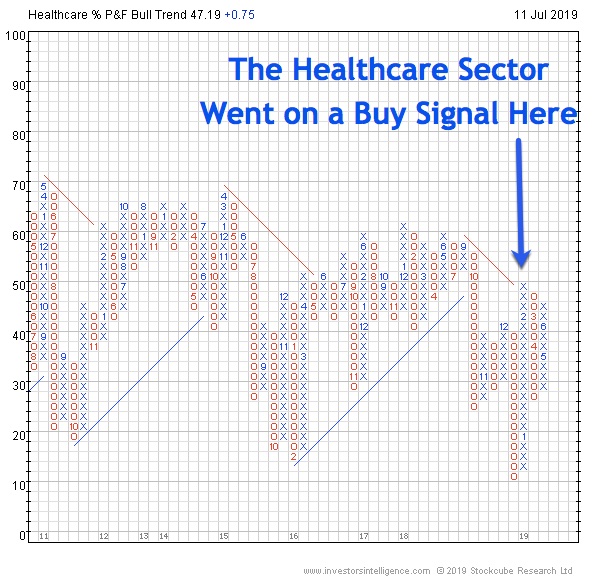 The sector is also outperforming the wider market.  Here's a chart comparing Healthcare to the equal-weighted S&P: 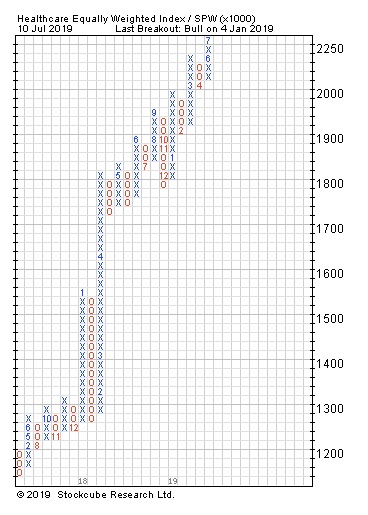 Not only is this RS chart in a column of X's, but in June it put in its third Buy signal.

While there's a lot to like about Veracyte's story, and a lot to love about the company's probable future...

At True Market Insider, we place our fullest faith in price action.

So, how does today's Small-Cap All-Star measure up?

The stock broke out in April of last year, after building a six-month base inside a horizontal channel (the two blue lines) of between about $5.40 and $7.25.

Then, after piercing below its 10-week moving average (a.k.a. 50-day moving average), it broke back up through "the 10-week" on massive volume (green arrow), on just its second attempt.  And when we say "massive volume", we're not whistling Dixie.

Look again at the green arrow.  Total volume traded between October 30th and November 1st came to 7,298,000 shares, or more than ten times the volume of previous sessions.

That's the kind of bullish conviction you want to see as your stock moves higher.  And notice how, when the stock did dip (before and after the green arrow), volume was practically non-existent.  When it comes to VCYT, bears are timid and bulls are roaring.

For almost all of 2019, VCYT has traded well above its 10-Week MA, and the stock has climbed an additional 90%.  And as you can see, whenever it dips below the blue line, a herd of bulls rushes in to propel it back up.  And while it's closer to the 10-Week than it was in the spring, notice that it's moving further away.  That is, the stock is putting in higher lows.

As of this writing (10AM on Friday) Veracyte is trading just 6.6% below its 52-week high of $30.25.  But I'll bet my Merle Haggard records this stock pushes well past that.

Some Concluding Thoughts And Catalysts

Demand for Veracyte's products (from both physicians and patients) will grow as more and more insurance providers add its tests to their list of reimbursable services.

One of the "Fours R's" of Veracyte's "first-to-market/first-to-coverage" strategy stands for 'Reimbursement'.  The company's sales force deploys a focused, disciplined plan for achieving contracted relationships with payers.

Veracyte's Envisia classifier has received a final Medicare "coverage determination".  That means the test is now "a covered service for nearly 60 million Medicare beneficiaries nationwide".  The test has also received regulatory approval from the New York State Department of Health.  So the test is now available to the people of that state.

In addition, Its Afirma GSC has now become a covered service under the U.S. Department of Defense's TRICARE healthcare program.  That means more than 9.4 million servicemen, retirees and their families can now be reimbursed for the test.

On January 3rd the company announced it had entered into a strategic collaboration with Healthcare behemoth Johnson & Johnson (NYSE: JNJ).

Under the auspices of JNJ's "Lung Cancer Initiative" the firms are out to accelerate development of the world's first nasal swab test for early lung cancer detection.

You read that right.  Veracyte wants to make it so that your doctor can swab your nose... and then tell you if you have (or are likely to get) lung cancer.

CEO Anderson said, "With the acceleration of our product pipeline, we believe this collaboration expands our addressable lung cancer diagnostic market to a $30 billion to $40 billion global opportunity.”

As we saw earlier, Veracyte estimates that 2019 revenue will reach from between $117 million to $121 million.  The stock currently trades for around $28.

If the company can capture even a fraction of that $30 to $40 billion opportunity -- say 2% - Veracyte's top line could grow five- or six-fold.  And while I wouldn't want to project that the share price would follow in lockstep...

We could reasonably expect it to double or even triple.

Thanks for sticking around.