Small-Cap Saturday: This Tiny REIT is Poised for Giant Returns

Hi everybody.  Welcome again to your favorite way to start the weekend -- Small-Cap Saturday. 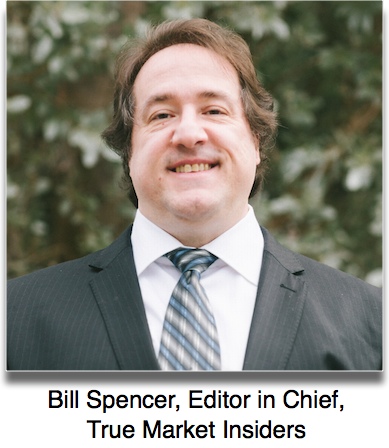 We've been having a heat wave here in New York.  But no matter how hot it gets where you are...

Today we're gonna look at a young $30 small-cap stock with a giant ambition.  This firm, with a market cap of $571.65 million, is out to transform the $7 trillion+ commercial real estate industry by "fundamentally changing the way reseal estate is owned".

The stock has jumped almost 11% in just two weeks -- and more than 88% since February.  As you're about to see, there's a lot to like about this stock.  And with the market rising at a torrid pace, you can expect a lot more upside ahead.

Despite dipping a bit on Friday, all the major market indices finished the holiday-shortened week in the black.  The Dow was up +1.21% (after hitting new intraday and all-time closing highs on Wednesday).  The S&P closed out Friday up 1.65% for the week (and enjoyed three straight record-closing days).

For its part, the tech-heavy Nasdaq was up 1.94% for the week, and also set a new record.

The Russell 2000, our small-cap benchmark, also finished the week on a positive note -- although by gaining 0.58% it lagged the large- and mega-cap names.  On Friday however, the small-cap index was the only one to finish the day with a gain. 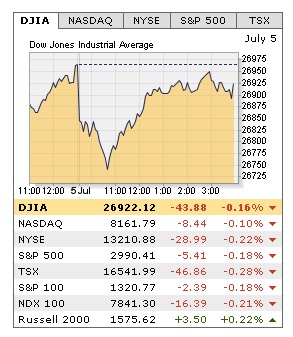 The company is Safehold, Inc. (NYSE:SAFE)  a real estate investment trust out of  New York, NY.  The parent company of Safehold is iStar, which launched SAFE in June of 2017 and functions as the company's manager and largest shareholder.

If the ticker (SAFE) looks familiar to you, but not the name, that's because prior to this past February, when it rebranded itself, Safehold was known as Safety, Income & Growth Inc.

According to the company, Safehold "helps owners of high quality multifamily, office, industrial, hospitality and mixed-use properties in major markets throughout the United States generate higher returns with less risk".  According to CEO Jay Sugarman, Safehold "is revolutionizing real estate ownership by providing a new and better way for owners to unlock the value of the land beneath their buildings".

What does that mean?

In other words, what Safehold has done is to more efficiently separate the land and the building to match risk-reward profiles of different investors.  "With our unique capital solution, building owners targeting a 15% ROE are no longer saddled with owning the underlying land at a 5% ROE."

According to the company, the Safehold solution "works across office, multi-family, industrial, hospitality and mixed-use properties."

SAFE is a perfect example of the kind of small-caps you want to own -- and hold for the long term.  I mean, companies that are solving industry-wide problems  and unlocking untold billions in value.

Just look at what Amazon did for retail, Uber did for transportation (and food delivery)... and what Netflix did to world-wide patterns of consuming movies.

This kind of company doesn't need to be an industry pioneer, necessarily.  It just needs to execute its strategy well.

How has Safehold performed?  Before we look at some of the company's numbers, let's look at the sector the company operates in.

According to Reuters, "Real estate is on track for its biggest annual advance since 2014."  Low interest rates and a strong economy should ensure that this sector remains a standout performer.

The sector's Bullish Percent index (BPI) is in a column of Xs (short-term strength). 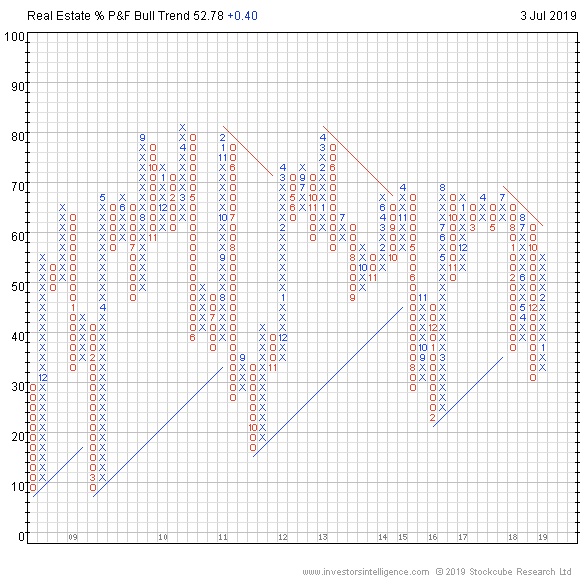 The sector's Relative Strength chart (which compares the performance of the Real Estate sector against the equally weighted S&P) is also in a column of X's (the  far right).  Plus, the chart is just a single box away from going on a Buy signal -- which indicates longer-term strength. 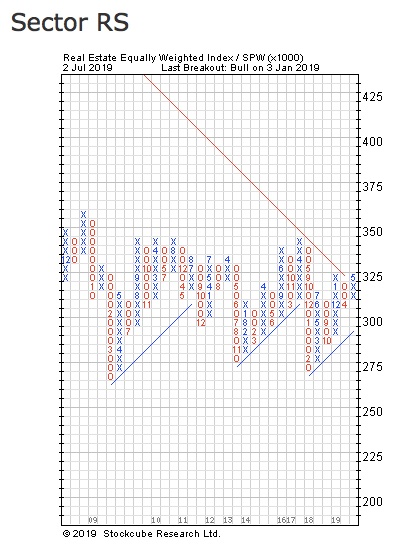 On June 11, Safehold's board announced it was raising its dividend 4%.  Right now SAFE's dividend ($0.62 annualized) represents a yield of 2%, on the low side for a REIT, where average yields right now come in at around 4%.

But we're not looking to own SAFE for that 2% yield.  (Although it is a nice little bonus). We're looking to capture near-parabolic gains.

After spending more than 18 months building a "base", SAFE broke out in February on heavy volume (the first green arrow on the left).  Since then, it's gained almost 90%.

The stock has been going higher and higher in stages, and except for a period of consolidation in June (red arrow) the stock has always been propelled higher on strong volume.

We saw the most recent bullish charge on June 28th (green arrow at the far right) and, as you can see, the stock has resumed its steady advance (up 11%).

There's a lot of bullish conviction here.  Institutional investors now own 34.19% of the company’s stock.  In fact, according to The Mayfield Recorder, "Vanguard Group increased its holdings in Safehold by 13.6% during the third quarter. Vanguard Group now owns 489,102 shares of the company."

The Recorder went on to add that...

Angeles Investment Advisors LLC acquired a new position in Safehold (worth $414,000) during the first quarter.

This stock looks like it wants to keep climbing on the same trajectory it's been on since February.  If it continues on its current trend, especially in a market where every major average is breaking new highs, we could see SAFE reach $40 or $45 in just a couple of months.

Finally, you've been hearing a lot lately about how the pre-election year (the one we're in now) is historically the strongest in the four-year election cycle.  But there's another bullish cyclical effect taking place right now, one that doesn't get a lot of attention.  You could call it the "ninth year effect."

The Stock Trader's Almanac reports this amazing pattern.  "Excluding the crash of 1929, the bear market of 1969 (both post-election years) and the small loss in pre-World War II 1939, all other "nine" years were up during the past 12 decades."

With SAFE you're buying a strong stock, in an outperforming sector...

... during a bull market that looks like it's headed for record-setting territory.

See you next Saturday!