We're approaching the end of the quarter.  And as the quarter turns, institutions tend to show their cards and reveal which stocks they are most interested in owning more of.

Keep your eyes open and know what to look for.

Here are a few important facts you should understand in order to increase your odds of profits in the coming months...

Lots of stock funds and institutions (like Rowealth) make scheduled contributions to the stock market.  Investors contribute money to their accounts, which ends up in the hands of fund managers who invest in their favorite areas of the market.

The most impactful scheduled contributions occur monthly, quarterly, semi-annually and annually.  Others happen on or around the 15th of the month and even just on Mondays.  It's no wonder, statistically, Mondays are the strongest day or the first month of each quarter tends to be the strongest month.  The impact of scheduled contributions to the stock market is very real.  So how can we make the best use of this knowledge?

As we enter the third quarter, the semi-annual, the quarterly and the monthly contributions are happening all at the same time.

By observing which areas of the stock market the money flows into at the turn of the quarter, we gain a general sense of what's to come throughout the rest of the quarter.

Instead, focus on the stocks that outperform the most.

Not only are major funds adding to their favorite positions with scheduled contributions, but they're also rebalancing existing positions.  The groups that outperform during this 2 - 3 week period are the groups you want to be invested in on a pullback.

The price fluctuations in the next few weeks are the culmination of thousands of board room meetings, conference calls and exclusive dinners in Manhattan's most expensive restaurants over the past month.

While the financial media has a field day selling ad space at the expense of individual investors (selling stock market hype), we simply observe where the strength and weakness reveals itself as trillions of dollars change hands.

Observe what works as the quarter turns and you'll probably get another chance to step in on a dip.  But first, identify the areas of the market proving to have the backing of the large fund managers.

After all, when you're invested in a specific market style (like large-cap, mid-cap, small-cap), or a specific country, or sector or even individual stock, and that security dips down with the rest of the market, it's quite comforting to feel like you're surrounded by strong buyers of that very investment vehicle.

In short, we want to own the areas of the market that have institutional sponsorship because they tend to remain under accumulation over long periods of time.

In 21 of the last 24 years, (or in 87% of the last 24 years) the weeks following June's quadruple witching (like the one we are in) were down-weeks for the Dow Jones Industrial Average.  If the stock market ends the week down, you'll know it's typical. Watch which stocks/sectors decline by a much lower amount or even buck the trend and advance.  If the stock market finishes strong this week, note that it bucked the typical trend, which would be one sign of strength as a whole.

Hopefully, by reading this, you won't be one of those investors who follow only the S&P 500 large-cap index or the Dow Jones Industrial Average (30 mega-caps) who see a down market this week and make the mistake of saying:

"Sure, a weekly decline makes sense at this point because we are probably due for another decline to recent support levels.  This is just par for the course".

After all, what's highlighted, below, is just another 1.8% rally off of the mid-June low.  Most people view it as a sea of small ups and downs.

But that's only what  big-company indices are doing. 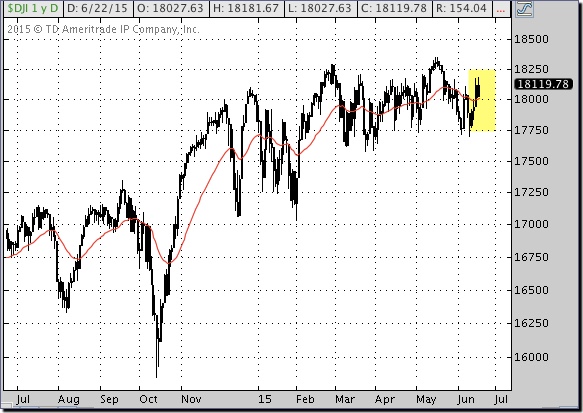 When we look at the small-cap growth stocks, shown below, we see something much more significant.  We have a breakout to a new high that began last Thursday, June 18th.   In fact, comparing the chart of the Dow, above, to the small-cap growth index, below, you might notice how one index is up 1.66% while the other is up 12.25%. 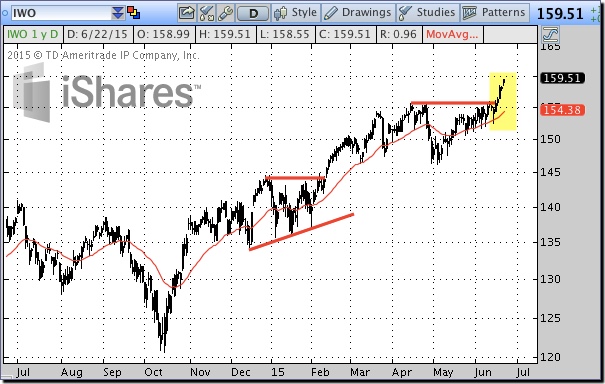 I'm not here to excite you about things that have happened in the past.  I'm here to explain why  the recent move in small-cap growth stocks is likely a significant sign of what's to come.

ANSWER:  Because it's a resumption in leadership.

After long-term leadership and a temporary rut in the second half of 2014, small-cap growth and mid-cap growth had been coming back with a vengeance in early 2015.  Seeing this resumption in their leadership, it's a bullish sign for the stock market.

There are two takeaways from this observation:

Here's a chart from the major low in 2011 through today.  The green line, representing small caps, along with the blue line, representing mid-caps, tends to advance by more than the S&P 500 large cap index at the early stages of a strong stock market rally. 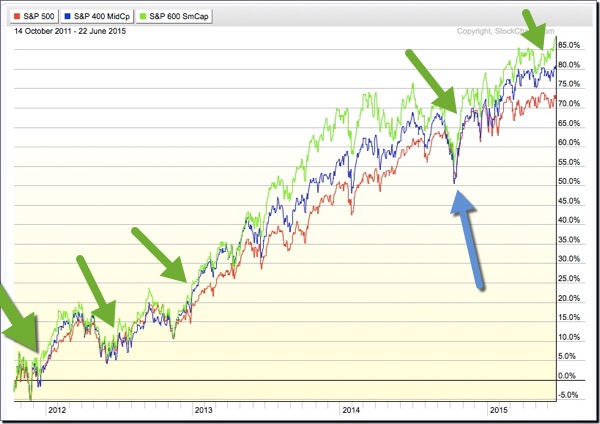 Notice how, when stocks pull back dramatically, the leaders tend to come right back down to join the laggards (blue arrow, for example).  This occurred in October 2014 so let's see what has happened since then. 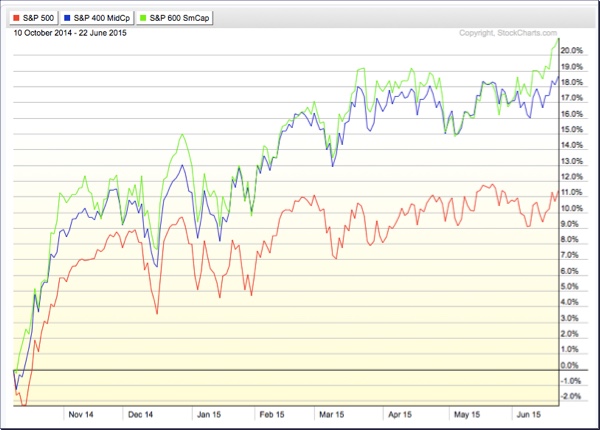 I often sight October 15th as the day the stock market bottomed out.  But notice how small-caps and mid-caps resumed their uptrend a few days prior to the S&P 500 large-caps (red line).  That was the beginning of a super sharp rally higher.  As large-cap stocks continue sideways, the smaller indices are, once again, running away.

QUICK TIP: here's a link to the performance charts I sometimes reference, like the one above.  You can use it to add symbols and compare securities to each other on your own, or selecting a group of stocks in its drop down menu.  It's FREE!   Bookmark the page so you can quickly reference it in the futures and be sure to play with the chart's buttons and scroll bar.  Use your mouse as well as your arrows and shift button to precisely control it.  Hopefully this will help you identify strength over the next couple of weeks.

So how does this tie into the fact that 21 out of the last 24 post-quadruple witching weeks of  June (like the one we have just entered) have been down weeks for the Dow?

Again, today, I'm not here to say "buy at this price and sell at that price".  Instead, consider that we are supposed to be in a weak week for the stock market.  What can we take away from this week's action?

As the quarter turns, we will rebalance our client's wealth into

the strongest sectors of the stock market.  For a short time, we are

opening our doors to new investors, with investment

member of our Private Client Group.  Click to learn more.

The press has been super negative lately but they have to create news when markets are boring.  I mean it really pisses me off because I know investors out there are being led to the slaughter house by the media. Turn the television off.

What can we take away from the recent negative market sentiment?

Try to tune out every fundamental analyst who believes the world just doesn't get it yet, but will soon.  Try to tune out the technical analysts who are using 100 different indicators, creating noise.  These guys love to use secondary indicators to make their cases.

Instead, focus on the facts and big powerful trends.  Focus on what we know for sure is currently happening.  Don't try to outsmart the guys who have all the money already.  They probably know better than you or your financial pro and they are the ones who have enough money to move the stock market.

Here's a fact:  After nearly two months of weakness, recently, more and more stocks have been moving back above their 10-week moving averages (similar to 50-day moving averages). 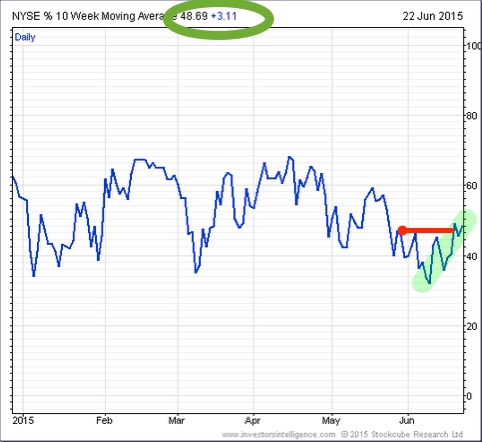 The above chart shows the percentage of stocks trading above their 10-wee moving average.  For perspective, I added the chart below, to show you an example of a stock with a 10-week moving average (red). 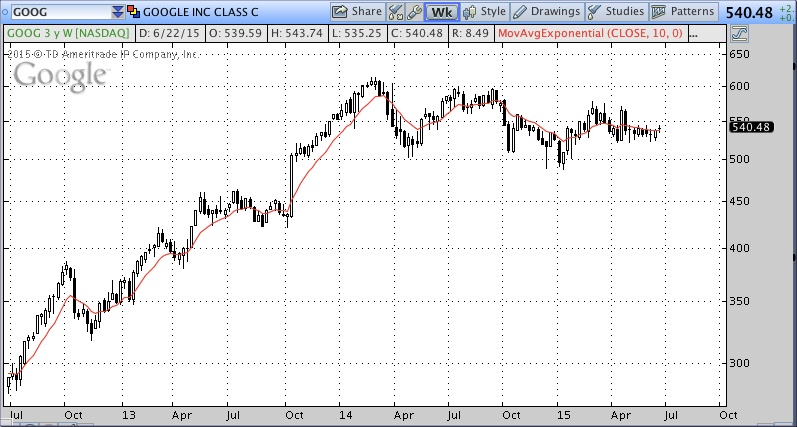 Rowe Wealth Management doesn't attempt to predict or forecast.  Instead, our specialty is having an ultra clear understanding of what's currently happening in the stock market.

We suggest investors keep a close watch on the stock market as the quarter turns.  This actually begins NOW because informed investors tend to front-run trends.  If institutions know a group of stocks will be purchased at the turn of the quarter, they'll often try to buy those stocks before the end of the month to get in front of a potential price increase.

Using our stock market data programs, we'll most likely just sit back and watch what happens over the next 2 - 3 weeks and THEN we'll rebalance our models within our clients' accounts after collecting clues and measuring footprints.

We hope you make great investing decisions and profits in Q3, 2015!