How Deep Will We Dip Down?

Ah yes.  The three Ds:  How deep will we dip down?

I don't have the answer but I have one indicator that I think can help.  It a moving average that has been tracking the S&P 500 pretty darn well.

Take a look at the 4-year weekly chart of the S&P 500, below.   The reason I chose the 4-year chart is it takes us just past the bottom of that 19.5% "market correction" of 2011.  This major and important sell-off occurred when congress couldn't get their act together.

It was the countdown to the deadline to raise the debt ceiling that prompted S&P to lower its U.S. debt credit rating to AA for the first time in history.

That bottom, in October 2011, was also a time when the stock market became so oversold (internally) that I consider it the end of a super short-lived bear market (May 2011 - Oct 2011) and the beginning of a new bull market.  I smirk when the pundits say this bull market is 6 years old because I feel it's 3.5 years old, considering the washed out oversold levels so many indicators clearly displayed in August - October 2011.

The chart below uses a 30-week exponential moving average (EMA) to smooth out the volatility of the S&P 500.  I have found this EMA to be a great guide throughout the latest bull market.  As you can see (green arrows), buying opportunities have been found when the stock market dipped down to this 30-wk EMA. 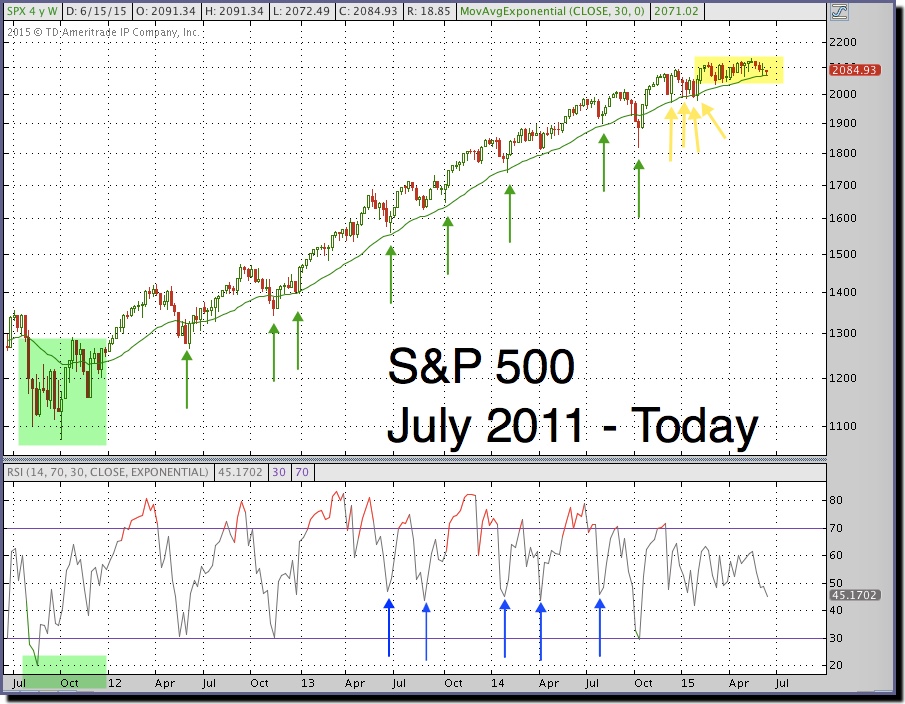 But we have been witnessing an important change in behavior this year, which I'll cover more in a minute.  But notice how closely the S&P 500 has been hugging this moving average and for how long it's been doing so (yellow).  This tends to be a strong sign of a stock market top, but we have to assume the bull market continues until we get confirmation that it's over.

While that may seem confusing to some, that last sentence will be the theme of this entire piece...

Whether or not this 3.5-year bull market is over remains to be seen.  As discussed Sunday, the overarching bullish long-term trend, in place since before the October 2011 bottom (green), is the relative strength of the U.S. stock market over all other 5 asset classes.  It remains ranked #1, by far, which is the big-picture consideration that would stop us from getting bearish, even when we see many signs of weakness.

For example, in addition to the supply side taking control of internal indicators, recent stock market momentum, as seen in key moving averages and  the weekly exponential RSI (bottom), shows a weakening picture.

We are referring to the long-term picture.

We have also recently seen signs of weakness in the short-term and intermediate-term and the jury is still out on whether this means we are in the "topping stage" of the long-term bull market, right before a sell off.  But to repeat the important point, we want to be cautious and position ourselves to profit from a continued bull market in the face of weakness for now.

That doesn't mean we have to be extremely bullish.  Just be sure to position yourself in a way that allows you to manage risk responsibly.

Are you confident about managing your downside risk?

If you can keep your time frames separate as you think about the stock market, then you can get the better of this market.

Short-term (days to weeks): The stock market is somewhat oversold but the supply side is still in control.  Don't be a buyer looking for a short-term move higher here.  When conditions are oversold, it makes sense to prepare for a bit more downside but a short-term reversal is likely soon.  The time to be a buyer is after seeing a confirmed reversal higher (see below).

Intermediate-term (weeks to months):  The supply side is in control.  The intermediate-term is not in oversold territory.  Thus, even if the short-term picture reverses higher at first, we want to watch it carefully to see if it has legs or if it's short lived.

Long-term (months to years):  The long-term trend is bullish.  In this context, we are referring to what stage of the 4-stage stock market cycle we are in.   Basing (accumulation, like in late 2008 - early 2009), advancing (mark-up), topping (distribution) or declining (mark-down).

Yesterday, I sent out an article warning you of a bear trap.   As usual, it makes sense to continue trading in the direction of the next larger trend (long-term up).  I invited you to a live webinar, later today to discuss a couple of investment vehicles to focus on when we move lower.

The way to make long-term money is to be willing to do what most investors are not willing to do and buy the short-term dips, like in early 2015 (yellow arrows) and intermediate-term dips (like in October 2014).  Buy the dips in an attempt to ride higher until we finally buy the one that turns into the bull market top.

Fine.  It's better to keep making money on each dip of a long-term uptrend and then take it on the chin once in a while at the real top.

Remember, most individual investors underperform the stock market so it's okay to do what most investors won't.  It's never comfortable. But if you fear the top every time there's weakness it's likely you'll get whipped around and get spun out of the market on frustration.

Here's the rub, and most investors have a hard time grasping this concept:  The uglier a picture looks, the more likely the market will move lower, but the stronger a stock market advance will be if the market does in fact advance in the face of an ugly market.  The reason is simple.  Ugly markets attract short-sellers who sell first in an attempt to buy back at a lower price.  More short-sellers means a bigger advance if they are wrong because when short-sellers close out their bearish positions, all the buying causes a short squeeze.

So circling back to the main point - we have to focus on the big trend (bull market) until the trend is at its end.  The relative strength of the U.S. equity market compared to the other major asset classes remains a powerful factor.  Other than that, we have an ugly picture.

The images from Arrow Funds, below, illustrate the way we approach investing and "trend following".  This applies to individual stocks, groups of stocks like sectors or global indexes, major U.S. averages and even Global asset classes. 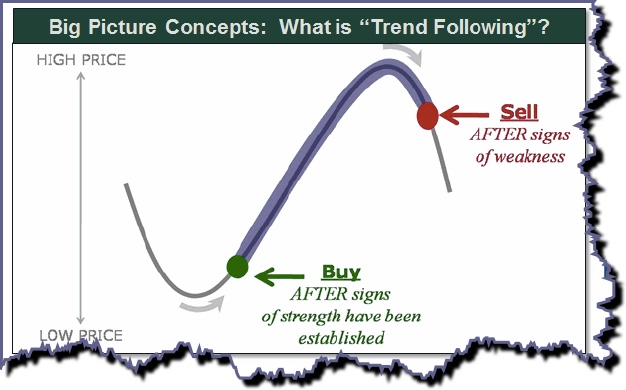 The image is of a smooth line.  And that smooth line is more representative of the 30-week moving average in the S&P 500 chart, above.  The image pretty much ignores the short-term dips and corrections seen in a long-term bull market.

We aren't at the point in the long-term stock market where the above image says "Sell".   But when you look at the 20-year weekly chart of the S&P 500, below, it's hard to ignore the same type of picture that we tend to see at major tops.

Just as the first chart in this article pointed to how the stock market has been hugging the 30-week moving average, the same happened at the roaring 90s top (1) and the credit crisis top (2).

Click this chart to enlarge for a closer look.  After all, it's a ton of data.

As the market topped out at points 1 and 2, instead of bouncing sharply higher off of the 30-week moving average, the stock market hugged the moving average.

What about top #3?  That's the May 2011 top, before the congress induced U.S. credit rating downgrade.  It didn't hug the key moving average, So why did I add the number 3?   Because of the huge similarity to the prior two long-term market tops.

The weekly RSI put out significantly lower highs as the stock market made higher highs (red diagonal lines).  This is called a "bearish divergence" or a "negative divergence".  We are seeing that same type of behavior today.

So why stick around?

Check out the sector activity in the first three tops on the 20-year chart:

We seek to add another layer of probability of success and reduce the importance of market timing by attempting to stick with the strongest sectors.  But we still must maintain a stance on the general stock market so we know what our market posture should be.

Right now our market posture is to remain cautious.

We are focused on hedging bullish positions but we are positioning ourselves to profit from a continued long-term bull market.  Hedging might include using options by selling covered calls and buying protective puts (out of the money and long-dated).  Risk reduction might involve increasing our cash position on rallies.  But we remain positioned for a continued long-term bull market until we have confirmation that it has ended.

Individual investors tend to have trouble staying focused on long-term indicators.  It can be like watching paint dry.  So I challenge you to keep on eye on the relationship between the S&P 500 and its 30-week moving average.  Save this article in your bookmarks so you can keep referring back to the 20-year chart and find similarities to the past or changes that suggest we will stop hugging the moving average and break away from it.

In the meantime, use pullbacks below the 30-week moving average as buying opportunities and focus on the strongest areas of the financial markets.  Play it as if the U.S. equities relative strength that's been in place for more than 5 years will continue.

PS:  If you're reading this before 5:30pm eastern time, then not too late to sign up for one of my two webinars today!   Here are the details.