I hope you’ve been enjoying the results from following the “True Market”.    I haven’t even spent a dime in marketing this weekly publication so you're part of a small and exclusive group.

I don't want to reenforce the expensive "crowd mentality" by writing on a topic everyone else is talking about.  So I'll sum up the whole Fed/Bond prices thing by saying this:  If everyone is saying bonds are at a top, especially if the financial media keeps asking you if bonds are a "ticking time bomb", then it's almost certainly not a top.  (Remember: Bonds up = yields down).

Let’s do something educational while we talk about the stock market today.  The general stock market looks STRONG and I’ll show you just one of many factors speaking to its strength: The “three advancing soldiers” variation.

But first, let’s start with this quick bit…

To ETF or Not to ETF

I wanted to know what kind of people invest in Exchange Traded Funds. 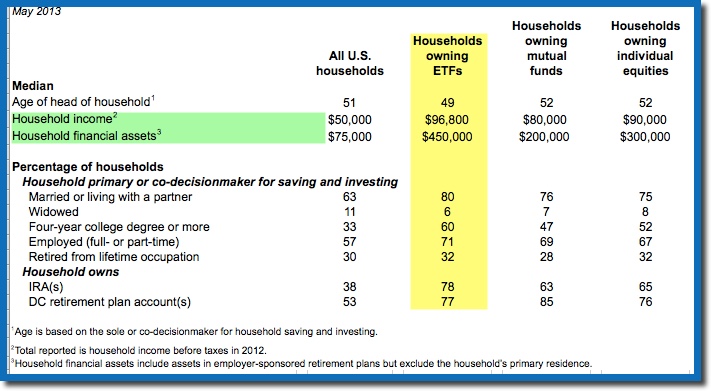 I posted some other data, above, because you may find it interesting.  All of the 7 models that Rowe Wealth Management invest's our client assets into focus on ETFs.  They save a ton on commission, they tend to be more tax efficient than mutual funds, they generally have a lower cost without hidden fees and they are more transparent.  Mutual Funds are often an encouraged investment by a financial "pro" who gets paid to put your money in the fund.  When you shop for investment advisors, stick with the one's that are "fee only" registered investment advisors, meaning they take zero soft dollars or kickbacks. 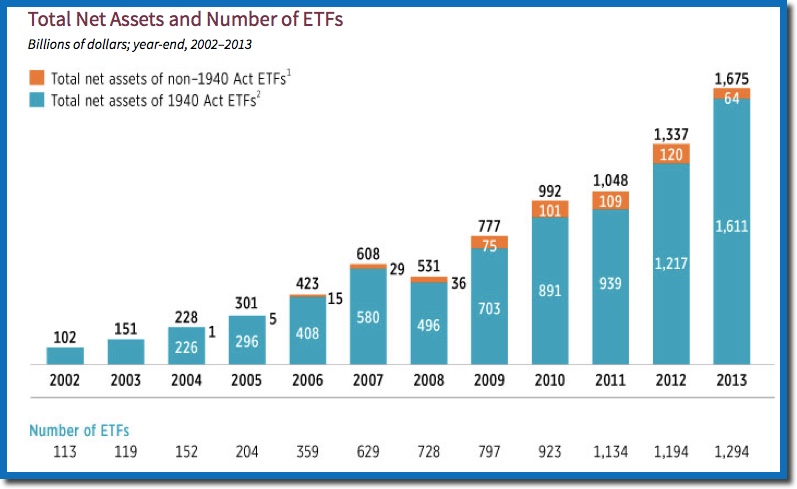 ICI  said "ETF-owning households tended to include affluent, experienced investors who owned a range of equity and fixed-income investments.”  But there is hope.  As fewer and fewer investors are investing in mutual funds and stocks, more are investing in exchange traded funds.

If you're in the vast majority of investors out there - the ones who don't yet invest in ETFs - then you should take a long hard look at the type of volatility you've encountered verses a hand full of ETFs that you could have seen yourself owning.  Select some that you think you'd have chosen in the past and compare the drawdowns (moves from high to low before making a new high) of the ETFs verses your portfolio.  You can screen for ETFs here but do so after reading this next short bit about stock market strength.

There's a great deal of money that can flow from the bond market into the stock market.  One reason we feel there's long-term upside potential in equities is perfectly illustrated by this chart we found at Dorsey Wright which they found at ICI (mentioned above). 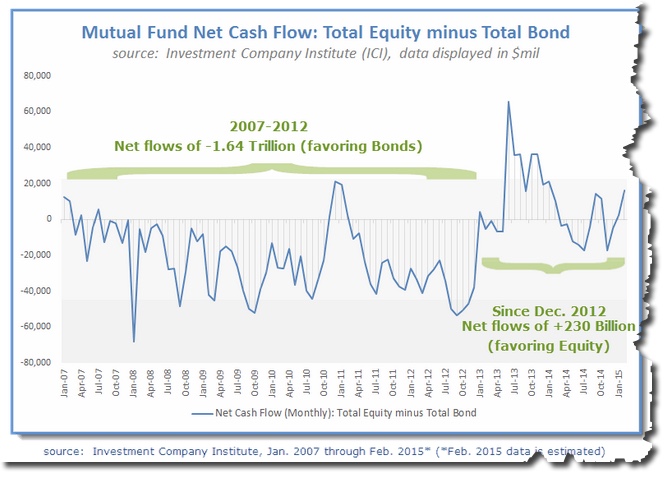 As you can see, since 2007, bonds had been favored.  Of course, in the second half of the best stock market year since 1997 (which was 2013), we started to see more money going into stocks than bonds.  The point is, stocks are starting to become more favored but this is after a long period of not being favored at all.  Stock market tops don't usually occur when individual investors are not strongly favoring stocks.  This chart, and the one above it, therefore imply we are not near "the" top.

First let's take a picture of the S&P 500.  In October the stock market "reset".  We saw lots of "True Market" indicators move to washed out territory that we haven't seen since the 2011 mini-crash and then since the 2008-09 bear market bottom.  For tons of detail on that, check the last Quarterly Market Outlook I wrote (back on October 15th).

From the September high to October low, the S&P 500 declined 7.4% from closing low to closing low and 9.9% from intraday high to intraday low.  But the blood bath that actually occurred was masked by the strength in the large-cap and mega-cap stocks (bigger stocks have the biggest influence on most stock market averages).

But as discussed in my QMO on October 15th, the "True Market" watchers knew that 76.48% of all stocks on the NYSE were below their 30-week moving averages.  For that to happen, you need a LOT of selling.  And that's a good thing for a strong long-term bull market.  It shakes out the weak investors that tend to sell when scared.  It leaves in the stock market, those who are willing to hold.  That means stronger moves higher with less reason to fear "the emotional crowd mentality".

And stronger moves are just what we got.  When you see an incredible rally higher, it typically speaks to the future stock market strength.  And such a huge move off the October low spoke volumes.

The green arrows point to STRONG surges higher.  Remember when we got that first December dip?  The spoiled brats of the stock market were whining.  The sideways action was even being complained about but the ferocious rally off of that December low implied even more strength ahead.

February showed us the same thing.  You get the point.  But what about the past 5 trading days? 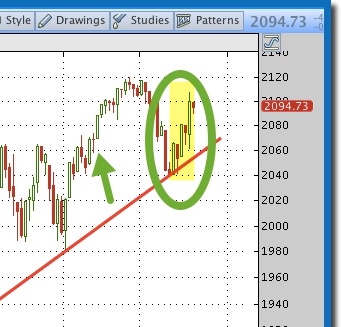 A "three advancing soldiers" pattern is a very bullish candlestick chart pattern, especially when the up days show increasingly larger candles.  It traditionally focuses on three time periods (like days, weeks, etc).  Candlestick charts is the style of charts I always post and they get their name because they look like candles.

The "wicks" indicate the high and low point of the trading period (in this case, day).  The red candles are down days.

Notice how the first two highlighted up days open at the bottom and close at the top.  We know this because we see no wicks. The third up day has the largest "real body" (difference between the open and close, which doesn't count the intraday high and low).

The three advancing soldiers pattern is very bullish but technical analysis is an art and not a science.  So you rarely see text book examples in real life analysis.  Here, we see one variation of this bullish pattern.

Each of the three up candles is separated by what we call a harami pattern, which is a two-day pattern where a small body candle is engulfed by the previous day's candle.  A harami pattern is a period of indecision where the difference between the open and close is minimal, creating a very small real body which is the thick part of the candle.  It doesn't really matter how big the wicks are.  The body is what's important.

It's a period of indecision.  Sort of a pause.  In another context it implies a pattern has stalled.  But now that we see them occurring in between the long up day candles, we can actually consider them as part of the over all pattern, which we now view as a variation of the three advancing soldiers.

In any case, this is just another bout of strength seen in the general stock market.  It doesn't mean we go straight up from here.  It's just another notch to mark on the bullish side of the bull/bear table.

By the way, you can find my past writings here, on True Market insider, in my Quarterly Market Outlooks, at Investment U and The Tycoon Report.  You might be interested in what I've said in the past, but in any case, you should stay educated on investing.  It can mean the difference between extreme happiness or not so much.  If you're new to this, then be sure to sign up using the box in the upper right hand part of this page.