"Don't Bore Me With Technicals"

“Don’t bore me with technicals!”

That’s what I heard as I was getting dressed this morning while listening to CNBC in the background.

Yes… I confess… I watch the networks while I get ready for work.  But I have an excuse.

After 19 years of constant focus on the market, I use the media as a tool for knowing what mistakes are being made and how to take advantage.

The talking heads were discussing employment numbers but people certainly feel the same way when you discuss likely future stock prices from the technical standpoint. 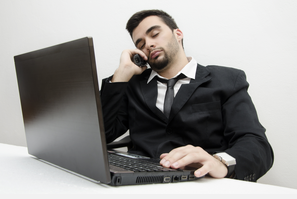 The story stocks will get the highest “open rates” if, when sending out emails, we fill the subject lines accordingly.

The dramatic story about the pimply faced billionaire or how stocks will be affected by the big political scandal will get the attention that keeps the media profitable.

People seem to appreciate financial entertainment much more than their own profits or logical action.

Even when studies prove that average equity fund investors tend to miss the majority of the gains in the stock market, they still focus on the big story instead of the “technicals”. 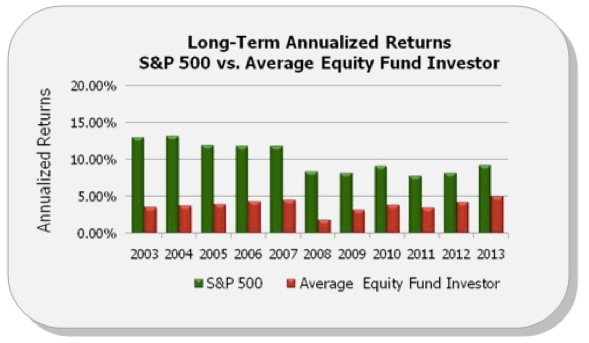 Studies by Dulbar have been making their way around the internet a lot lately, the validity of which have been debated.

But I’ve spent over half of my life talking to individual investors and I can tell you that most seem to underperform the stock market.  I don’t need research and stats to tell me that.

The chart, above, shows the S&P 500’s average annual returns over 20 year periods.

In other words, the first green bar from the left tells us what the average performance was over the prior 20 years.  The red bar next to it shows what Dulbar claims is the performance of the average stock fund investor, over the same time frame.

What I'm about to show you may not equate to a triple shot of espresso or a 5-hour energy drink.  But the proof of the success of relative strength investing is certainly overwhelming.

You can use this link to access research from 10 different sources on the most BASIC form of relative strength rebalancing, called "momentum investing".

All they're doing in most of the studies is focusing on a large group of stocks (like 1,000 stocks) and every month they'll make sure their index owns the top stocks (like the top 10%, 20% or 25% best performing stocks).