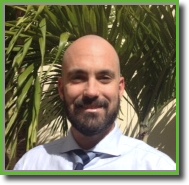 Our newest client - for privacy's sake let's call him "Mr. Biggles" - sat across from me at my desk at 8:30am.

All hopped up on coffee, he was looking for solutions to today's most common problem for retirees:  How to generate income in a low interest rate environment.

When we asked Mr. Biggles what he's looking for in a financial advisor, he gave the very common response: “Well, to make money of course!” 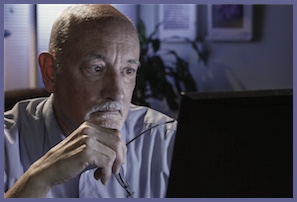 "But what about happiness, comfort, low anxiety and low stress?", I asked.

We explained the formula for "happiness".

This formula begins by gauging the amount of risk Mr. Biggles is willing to assume.

From there, we estimate the highest potential return, based on that risk level.  And this formula is obviously different for everyone.

Can Mr. Biggles Have His Cake and Eat it Too?

Biggles wanted income in a low interest rate environment but didn't want to give up stock market upside.  We agreed he's addicted to the excitement of the stock market and established that he can withstand some volatility that is slightly less correlated with the stock market benchmarks.

There's nothing wrong with being addicted to the excitement of the stock market as long as you're managing your risk responsibly.  We proposed making qualified dividend paying stocks a significant part of his portfolio.

We always want to be in the strongest markets, strongest sectors, or strongest stocks.  After all, this is your hard earned money so you want to go well beyond just finding a couple of mature companies with a history of paying decent dividends.

Must you sacrifice growth for income?

If you had owned General Electric (Symbol: GE) throughout 2014, you would have received an annual dividend yield of 3.3%.   Not bad, considering 10-year Treasury yields averaged 2.54% last year.

The good news is you may have received a dividend of 3.3%.  The bad news is the stock was down 5%.

Do you know anyone who focuses so hard on the dividend that the forget about the principal value of the investment?

This is actually all too common.  But we would prefer to seek out securities that offer growth along with income.

Lets look at Wells Fargo (WFC) over the same period.

Not only did WFC pay a 2.5% dividend in 2014, the stock price was up 24%! Here is a performance chart of these two companies with similar dividends over the year 2014. 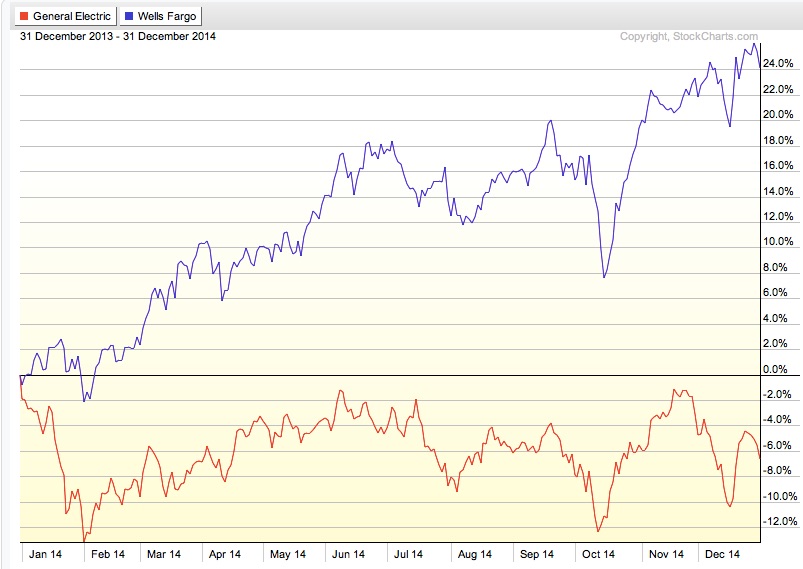 Could we have known Wells Fargo would run over 24%?

But comparing the two stocks on a relative strength basis at the beginning of 2014 may have shown us which was the stronger dividend stock at the time.   This simple task can be an enormous help with security selection.

In the "symbol" field, we simply entered the primary security, a colon and then the comparative security "WFC:GE".  (If we entered "GE:WFC" then the chart would be reversed.)

When the line advances we know Wells Fargo is either going up by more or down by less than GE... Or, WFC is going up while GE is going down.

When "Up" is Up Enough

I added the red and green highlight to make your life easier as well as the blue and black horizontal lines.

The RS chart of WFC vs. GE is on a "relative strength buy signal" (highlighted in green) when it makes a significantly higher high (and vice versa).  This happened on the first trading day of 2014.

If you find yourself having trouble deciding what a "significant" higher high or lower low is, you can choose to view the relative strength chart as a point and figure chart instead of the line chart like the one, above.

To do this, scroll to the bottom of the page on stockcharts.com and click the point and figure chart link.  You'll get something like this. 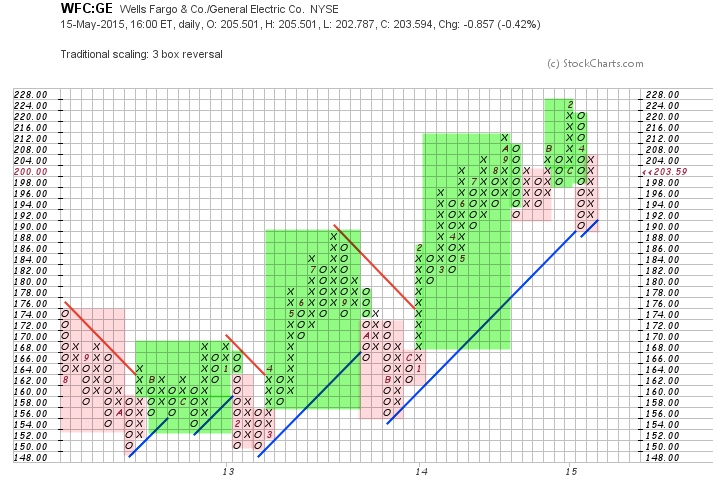 Again, I added colors to show when the chart is on a buy signal (green) or sell signal (red).  And again, a buy signal is when the chart surpasses a previous high.  Point and figure charts only change with significant moves, making it easier for data programs to quickly tell us which securities are outperforming others with less room for error.

Back To Mr. Biggles

I explained to Biggles that we would run some programs to find the high dividend stocks that are showing the best relative strength.  This tends to increase the odds of outperformance.  While we run a number of programs to evaluate relative strength, I'll show you just one of the methods I used to find what I'm calling "The 10 Strongest Dividend Stocks."

But at Rowe Wealth Management, time is of the essence.  So we have a number of sophisticated tools at our disposal.  So we can run a thousands of relative strength charts of several securities verses others in the matter of seconds.

Here's a what a relative strength ranking table would have looked like, as of the closing prices of January 2, 2014 (the first trading day of the year).

In the table, above, the system shows Wells Fargo on a relative strength buy signal verses all 5 of the other securities (notice one of the securities is "SPX", which is the S&P 500) at the beginning of 2014.

This means it was the strongest of the 6 securities, on a relative strength basis, at the time.  Let's pause here to take a look at what happened over the following 12 months.  Below is a comparative performance table. 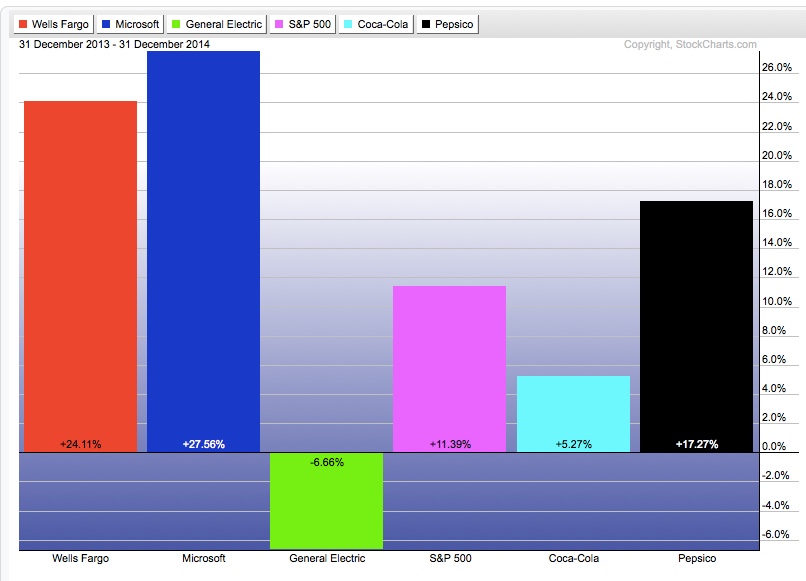 Fortunately, we aren't forced to set up a portfolio and then take a space shuttle to the moon for a year.  We can adjust as we go...

Here's what the relative strength ranking table looked like on June 30, 2014.  Wells Fargo and Microsoft still hold the top two positions.  But GE was bumped from third to fourth as it began to underperform the S&P 500.

So here it is.

The top 10 strongest dividend stocks on a relative strength basis:

After starting with a pool of over 100 dividend paying stocks, we narrowed down to the above 10 stocks that have a consistent history of paying qualified dividends between 2.75%-5% on average annually.

Next, we cross referenced a number of probably strength factors.

These stocks are selected from a handful of the strongest sub-sectors in this market.  Then they were filtered using the same ranking technique described above and selecting those ranked among the top of the list.

Notice the RS Signals are all "Buys".  This refers to the stocks’ long-term “MARKET relative strength”.   This may look familiar to anyone who has been following the Technical Analysis Millionaire investment methodology (our investing course, taught by Chris Rowe) for any amount of time.

This means the stock goes up by more or down by less than “the market” (in this case, the equally weighted S&P 500.)

There you have it.

Don't think in terms of "relative strength" stocks and "dividend" stock being separate options.  You can include many forms of relative strength studies to your selection process for any security that can be traded.

You shouldn't have to sacrifice being in strong sectors or stocks just to received a dividend.  Thanks for following us.  And thanks to Mr. Biggles for letting me share your story.

P.S. If you want to learn more about relative strength, you can check out the following resources:

Relative Strength Rebalancing as a Framework

Past performance is not indicative of future results and there is no assurance that any forecasts mentioned in this report will be attained. Stocks offer growth potential but are subject to market fluctuations. Dividends are not guaranteed; companies can reduce or eliminate their dividend at any time. There are special risks associated with an investment in real estate, including credit risk, interest rate fluctuations and the impact of varied economic conditions. Technical analysis is just one form of analysis. You may also want to consider quantitative and fundamental analysis before making any investment decisions. Please be aware that the content of this newsletter is based on the opinions of Rowe Wealth Management LLC.

The information contained herein has been prepared without regard to any particular investor’s investment objectives, financial situation, and needs. Accordingly, investors should not act on any recommendation (express or implied) or information in this material without obtaining specific advice from their financial advisors and should not rely on information herein as the primary basis for their investment decisions. Information contained herein is based on data obtained from recognized statistical services, issuer reports or communications, or other sources believed to be reliable (“information providers”). However, such information has not been verified by Rowe Wealth Management LLC or the information provider and Rowe Wealth Management LLC and the information providers make no representations or warranties or take any responsibility as to the accuracy or completeness of any recommendation or information contained herein. Rowe Wealth Management LLC and the information provider accept no liability to the recipient whatsoever whether in contract, in tort, for negligence, or otherwise for any direct, indirect, consequential, or special loss of any kind arising out of the use of this document or its contents or of the recipient relying on any such recommendation or information (except insofar as any statutory liability cannot be excluded). Any statements nonfactual in nature constitute only current opinions, which are subject to change without notice. Neither the information nor any opinion expressed shall constitute an offer to sell or a solicitation or an offer to buy any securities, commodities or exchange traded products. This document does not purport to be complete description of the securities or commodities, markets or developments to which reference is made. Past performance is not indicative of future results. Potential for profits is accompanied by possibility of loss. You should consider this strategy’s investment objectives, risks, charges and expenses before investing. The examples and information presented do not take into consideration commissions, tax implications, or other transaction costs.