Is the Bull Market in Trouble?

Although the major stock market averages are trading near all-time highs, something is rotten in the state of Denmark. 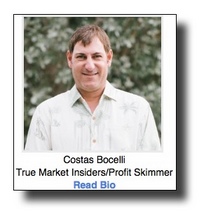 Pardon me for stealing a line from William Shakespeare, but over the past couple of weeks we’ve seen some troubling signs that could potentially cause the stock market to give up the ghost.

I doubt that many investors see things this way.  Because, on the outside, things are looking pretty good.

Even after a recent broad selloff and an uptick in volatility sparked by rising tensions on the Korean peninsula, the Dow Jones Industrial Average, the S&P 500 and the Nasdaq Composite have all recovered a good portion of their losses.  They now stand just a percent or so from their recent record highs.

But on the inside?  There’s something horribly amiss, something that merits investors' attention.  You see, over the past two weeks, we’ve seen significant erosion in breadth, or market participation.

Earlier this week, Chris Rowe alerted you to the fact that the NYSE bullish percent index (BPI) reversed to a column of O’s for the first time since the November election.

But when it reverses to O’s, like it recently did, it’s alerting us that more and more stocks are breaking key support levels.  This in turn is a signal to take a more defensive posture in the portfolio.

As I mentioned, market breadth tells us how broad the participation is in the overall trend of the stock market.  In a stock market that’s maintaining a positive trend like it still does today, you want to see a lot of stocks participating in the rally.

In last week’s article, we discussed how just a handful of stocks have been largely responsible for most of the gains in the price-weighted Dow Jones Industrial Average.  High-priced giants such as Apple (AAPL), Goldman Sachs (GS), Boeing Aircraft (BA) and Caterpillar (CAT) have been doing most of the heavy lifting.  We did mention on a positive note that these stocks happen to belong to the strongest sectors of the market with respect to relative strength which actually is a good thing.

But the significant narrowing of participation we've seen over the past couple of weeks is considered a major red flag.

While the large-cap, high priced “generals” have been holding the fort, thousands of "troops" have been taking heavy casualties on the front line.  That's a development that rarely wins wars.  That's why this development is giving us pause.

If you think about it, the stock market is like one continuous war with securities fighting a bloody battle each and every day to compete for a spot in your portfolio.  And right now, more and more stocks are losing the battle.

And if this intensifies, it could mark a key turning point.  It’s important to understand that the bulls continue to remain in control, but the bears are gaining ground.

Have a look at two more breadth indicators which should help you see what’s really occurring on the inside, what we consider to be the true market.

The first one is the NYSE Cumulative Advance/Decline Line which is a running daily tally of the number of advancing stocks less the number of declining stocks on the New York Stock Exchange Composite.  The results can be plotted on a graph. 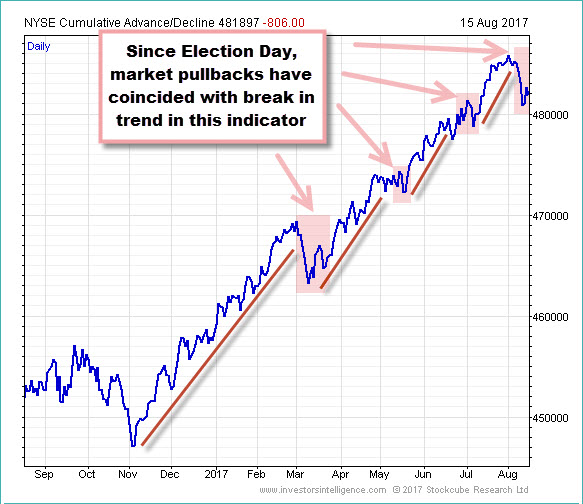 It’s very easy to read.  When it’s rising, more stocks are closing with a gain than with a loss on a daily basis, which means the market is seeing broad participation.  In a bull market, this is a healthy development.

But when it trends lower, more stocks are finishing in the red, which means less participation to the upside.

Since Election Day, the stock market has experienced four periods of weakness.  And with each of them, you see a break in the uptrend on the chart like the most recent one that began earlier this month.

The second breadth indicator is the NYSE High-Low Index which is a ratio of the number of NYSE stocks showing new 52-week highs, divided by the sum of the total new highs and new lows, smoothed using a 10-Day moving average. 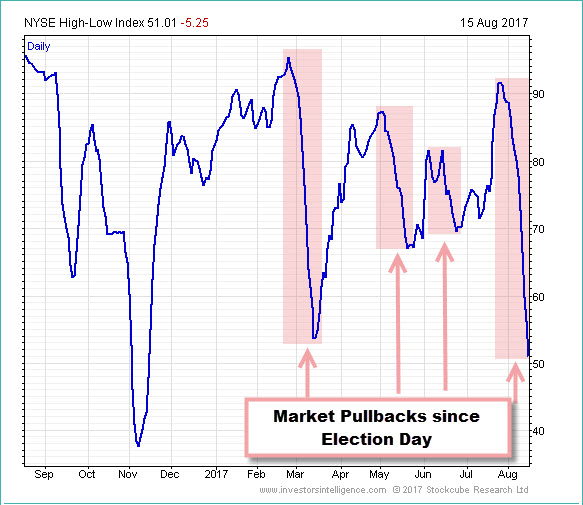 This indicator may seem a little confusing but it is also pretty easy to interpret.

But when you see this indicator reverse and turn lower, that means more stocks are breaking down and making new 52-week lows -- a sign of poor internal market strength.

This article is not intended to frighten you into selling all your stocks and loading up on gold and canned food.

The reality is that despite the recent deterioration in market breadth, U.S. Domestics stocks continue to maintain a positive long-term uptrend.  They remain by far the strongest asset class with respect to relative strength among the other five broad asset classes.

Technology, Financials, and the Industrials also happen to be three strongest sectors with respect to relative strength.  These are the segments of the investing universe that continues to merit the most attention.

Having said that, it would be unwise to ignore the short-term weakness in breadth.  Because of this, it’s prudent to consider some defensive measures.

This is a good time to conduct a portfolio review in order to ensure there’s a healthy allocation of technically strong securities.  It’s also a good time to weed out any laggards.  Raising cash during a period of market weakness enables you to buy attractive securities at discounted prices.  So start building a shopping list.

Stay the course, but tread carefully until breadth improves.